A New Sport is Born

Apparently this happens when one gets rid of cable:

Last weekend was a huge weekend for area trail runners. In fact, I'm almost certain that every person I've met in the running community was involved in either the Pikes Peak races in Manitou, TransRockies, the Leadville Trail 100, or some combination thereof. For myself, after testing the 50 mile waters in 2011 at Lake City and then Pagosa Springs, Leadville was beckoning me to the "hundy" distance.

For some, having an intricate calorie and hydration plan complete…

In my circle of friends, it's a common occurence for inanimate, yet cherished objects to warrant a name. And before you start judging, this phenomemon is apparently fairly rampant in our culture. Ships have been named for presidents from the U.S.S. Washington to the U.S.S. George H.W. Bush. Herby and Kitt were both beloved automobiles. Even a healthy dose of the entertainment I enjoyed as a kid including The Brave Little Toaster, The Velveteen Rabbit, and Winnie the Pooh were all…

Pikes in July and a Fancy Training Algorithm

Sometime during a 6.5 hour Leadville scouting run Saturday, I convinced myself that taking care of the monthly Pikes trip the following day was a good idea. With the goal of more time on feet and Charlie Brown by my side, in actuality, it wasn't bad at all.  There were a handful of moments early on though that I began thinking about my training plans (or lack thereof) that got me into situations like this, oftentimes with little forewarning or…

But what if bonking…

Once upon a time, in a place not so far away from here, there lived Tres Passer and Giant Killer, two elder adventurers. Now there was nothing inherently special about these characters. In fact, they were really just ordinary folk. They had no magic powers. They could not fly, or become invisible, or converse with animals, and they were not rich. They did however, love the mountains where they lived and had a reputation for long, and oftentimes ridiculous journeys.

Rhythm for the Blues: Pikes in May

Ask any runner and they'll tell you that they're much better company when they are able to do what they love. Miss a training run here and there and they may get a little edgy. Miss weeks of training or, heaven forbid, a race, and it becomes a potentially volatile situation. You see, running for runners is the consummate anti-depressant and mood stabilizer. When this is taken…

Fools on the Hill: The INCLINATHON Run-down

I like to think of myself as a dreamer. An ideas man. Sometimes these grand visions fail to come to fruition and remain just thoughts. Other times, they are attempted but for one reason or another, they fall apart. Such was the case when a buddy of mine in NC decided to hike from Mt. Mitchell to Mt. Pisgah. Things went smoothly except we spent the first day hiking in the wrong direction and wound up in Busick, NC (never heard of it? neither had we) only to call his parents to bail us…

Many weekends as of late have been dedicated to some pretty serious Inclinathon training. But last weekend, despite having less than 2 weeks to go before the big day, I had a hard time stomaching more 30+ minute/mile repeats. So while I probably should have pushed beyond the 1/2 Inclinathon distance, I convinced myself that some actual running was much needed.

My Monday through Friday gig is incredibly rewarding.  In fact, I still have a hard time believing I get paid to laugh and play with kids while helping them function more independently. Nevertheless, job related stress or perhaps the unwelcoming darkness and cold of the season has contributed to some pretty inconsistent weekday training sessions as of late. But, as one of my professors advised, "you are not your job." So no matter how many pre-work runs I miss, the desire to fill…

Thankfully last week's snow and wind gave way to forecasted city temperatures in the upper 50's and copious amounts of sunshine. So, as I looked out the window Sunday morning, there was very little doubt in my mind that it was going to be a great day to get the monthly Pikes run in. But while I'd convinced myself of summiting, selection of attire loomed as the big question of the day. How does one embark on a 6-7 hour run with fickle winds and temperatures ranging from 50 to -5…

A Slice of Pi(e)kes to Ease the Belly Blues

We all have our own share of demons and closet skeletons. My demons live in my digestive tract, my skeletons reside in my colon. So around this time last year I began…

Let me preface what I'm about…

Saturday was the 2nd annual Ponderous Posterior: the culminating event of Colorado's Fat Ass 50k Series (three off-season trail runs with earlier gatherings in Boulder and Fort Collins). The defining (and best) feature of these "races" is the absence of entry fees, age group categories, formal awards, or any semblance of a race lottery. Instead, just an abundance of great trails and an opportunity for some friendly competition with some of the best runners in…

January 7th 2012: one down, eleven to go. After nearly 6 hours of time on feet, I discovered that running Pikes every month may be more difficult than I initially thought. While it's clear I left my 14,000 ft legs and lungs in 2011 and my pace left much to be desired (especially after last August's performance), it's not the conditioning that worries me. No, I think… 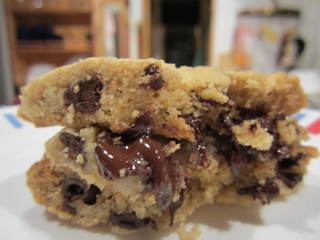 Last year will be tough to beat. I'm sure I've said that before but 2011, marked by meeting an amazing collection of running friends, some real solid races with even more memorable training runs, and ousting JT as the unofficial Cherry Picker of the Year, has been unforgettable. But the generous period of…

Tally-Ho: The Movie (Grand Canyon Rim to Rim to Rim)

Video account of CRUD taking on the KRISPY KREME CHALLENGE

With a low mileage, metatarsalgia-ridden month that somehow led up to a 9 hour birthday run the week before, to say I felt a bit ill prepared heading into the Devil Mountain 50 miler is an understatement. But after surprising myself at the Pikes Peak Marathon, the thought of doing one last 50 miler before the year was out seemed like a good opportunity to squeeze a bit more suffering to satisfy my masochistic cravings until 2012. As an added bonus, a strong representation of local…