For the past two years, I've decided there's no better way to mark my birthday than with an adventure run. And while I have a pretty poor historical memory, I've realized that prior to this tradition (to which I credit O'Day's jaunt to Cripple Creek) I sadly can't recall my previous birthdays. Of all the days of the year, one's birthday should never be taken for granted. In light of this, a group of friends and I will be embarking on Pikes Ultra (PU: The Stank) in celebration of another year.

The Stank (formerly conceptualized as Zebulon's 4) is an idea that germinated earlier in the year. As I recall, Brendan Trimboli and I were discussing ridiculous records regarding Pikes on a Spring summit trip. We talked about the guy who spent 21 days pushing a peanut up the mountain with his nose. The conversation then shifted to Dennis Wied who made a record setting 5 ascents in 24 hours with helicopter/automobile assisted descents. 5 ascents 24 hours is unbelievable but helicopters are hard to come by these days. Interestingly enough, Wied also holds the 24 hour round trip record with 3. Naturally, we wondered if anyone had attempted 4 round trips.  An arduous undertaking of roughly 100 miles with over 30,000 ft of climbing and the same amount of dropping, the thought was oddly appealing because:

a) It'd be virtually impossible to get lost

b) it would offer opportunity for ample support with potential aid at the bottom, Barr Camp, and the Summit House for each lap

c) such an incredible challenge was right in our backyard, negating worries over travel, lottery luck, or lodging expenses

No dates were pinned down but we were both very interested in giving it a go. Now, fast forward several months. I must have mentioned this casually to some friends because Amy emailed me a race report from the Pikes Peak Quad. It appears the 100 miler was a legitimate race in 1994. Sponsored in part by the Wheeler House, there were 7 starters and everyone finished. The race was held in early June but because of snow, each runner was required to have an ice axe. You can (and should) read more about it here. What astounded me the most about ancient adventure, was that of all the local runners I talked to, not one recalled this event. How could something like this be forgotten?

Inspired, I sent emails to Scott Weber (Quad race director) and Marshall Ulrich (who finished second that year). I  learned that the two of these guys finished the first Pikes Quad together in 1991 after a discussion that, ironically, was very similar to the one between Brendan and myself.  Seems ultrarunning, much like fashion, is cyclical. The success of the 1991 adventure inspired Scott to put on the official event 3 years later. Two successful Quads still would not satiate Ulrich's appetite for big feats on Pikes. In 1998, he attempted the first ever Double Quad consisting of 8 roundtrips! Unfortunately, his trip was cut short because of this: 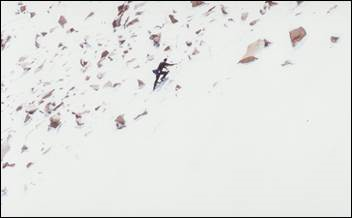 So, after nearly 20 years, the Pikes Ultra returns! Though several course options were debated, we have decided to stick to Barr Trail in it's entirety with the start/turnaround point at the trailhead. This will make for roughly 96 miles and just shy of 30,000 ft of climbing. Dan Vega, though he won't be doing the full Stank, has proposed a final Incline ascent/Barr descent as a means of making this a true 100 miler. All I can say is OUCH!

To be honest, up until a couple of days ago, an angry bursa had me all but ready to throw in the towel on this one. A trip to Dr. Mathews last week seemed to help so as it stands, I'll be joining Jeff Mohrmann and Jay Meservy in the full Stank. We'll kick things off at 6 pm Friday the 27th. Tim Steffens, Katie Katalin, and Tom Caughlan will hit the trail a little later for the Half Stank around midnight Friday/Saturday. Other folks may show up for a single or partial trip sometime Saturday and will crew or heckle as they see fit.  Unfortunately, Brendan is touring Europe after racing UTMB but he's bound to give this a go at some point.

Birthdays have been great opportunities for reflection and I'm pretty certain that 24-34 hours of moving meditation time will be more than enough! As the aspens begin to golden, Autumn is in the air and now, so is the Stank. Ooh That Smell!

i would expect nothing less than something this extreme ....happy birthday Brandon and i hope you kick everyone's butt!