Rhythm for the Blues: Pikes in May

Ask any runner and they'll tell you that they're much better company when they are able to do what they love. Miss a training run here and there and they may get a little edgy. Miss weeks of training or, heaven forbid, a race, and it becomes a potentially volatile situation. You see, running for runners is the consummate anti-depressant and mood stabilizer. When this is taken away, they become a little less Jekyll, a little more Hyde.

Well for me, this last month hasn't gone quite according to plan. Insufficient rest and recovery after the Inclinathon, it seems, had finally caught up to me.  The breaking point happened the weekend before the Quad Rock 50 when I found myself holding down the upchuck on Intemann.  I'm honestly not sure whether it was the physical pain from spraining my ankle for the second time in a month, or the realization that I would have to forfeit the following week's race that contributed more to my vomitous urges. Either way, frustration with this recurring injury and a recent exacerbation of a UC flare had left me feeling pretty low.

After I had enough of the pity party though, I pulled myself together and worked to shed these demons. Tired of my ankle resembling a baseball, I underwent more diligent rehab with contrast baths, ointments, massages, stretches, wobble board exercises, proprioception work, plyometrics later in the process, and the piece de resistance, an ankle brace, as this time my confidence in Ol' Righty was pretty well shot.  I also decided that lying on the couch while still enjoying a 5 jar per week peanut butter habit wasn't really doing anything for my fitness. So once much of the pain subsided, I started jumping rope and riding the bike to work. 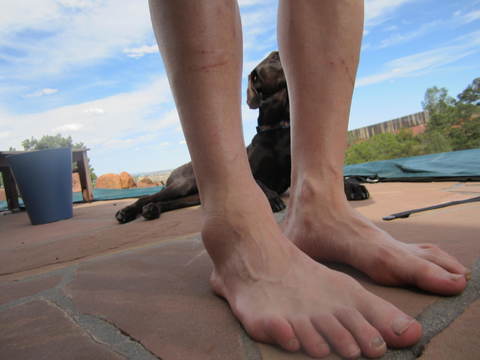 In regards to my intestinal issues, after putting it off for months, I finally went to my GI doc and settled on a solution, at least for the time being. Things were now starting to look better. 7 days after the injury I could only hobble a mile. 12 days post sprain I made it through the Garden workout. And after two weeks of rehab, the time was right to (cautiously) make an attempt to keep the monthly Pikes streak going and determine if I have any business running another 50 mile race in 4 weeks.

A partial representation of the Tallyhoes consisting of Carson, Reese, and the Aaron formerly known as "Slow" would be accompanying me on the trek. With a slight modification of the standard route, we began the day up the Incline with the justification that obligatory hiking would be a much better warm up than running up the W's. The party stayed loosely together until Barr Camp. Here we refilled on water said a quick hello to Teresa, my salt lick savior, before heading up. 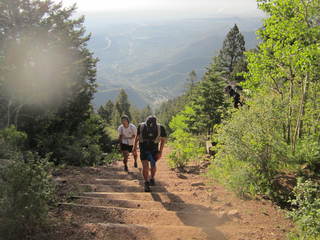 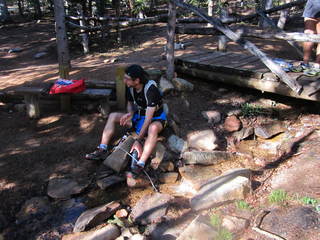 Not So Slow Aaron was feeling good and was quickly out of sight while the rest of us pretty much hiked the rest of the way to the top. But with no time goals, and an unshakable feeling that I was already testing fate with my ankle, I was just happy to still be moving forward. What little snow we encountered above tree line was slushy, so even when blue skies gave way to a ubiquitous fog, the conditions were still pretty ideal. 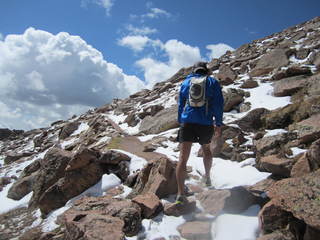 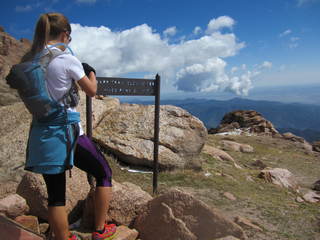 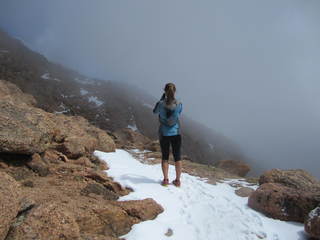 At the top, we waded through a sea of cog tourists to get the ceremonious and obligatory donut. While up there, Carson caught a bit of the altitude bug but we were lucky enough to run into Jill, Queen of the Incline and Simon the Mountain Runner who gave him a ride down. Reese and I carefully picked our way down and reconvened with the rest of the Tallyhoes in Manitou for some Matt Carpenter ice cream and a quick soak in the creek. All in all, a fantastic day with great friends and it made me realize that while racing certainly has it's allure, what I missed most while sidelined with injury were these impromptu adventures.

Folks talk about "flow" and finding pure effortless joy in a particular pursuit. "Flow" is a gratifying, fluid rhythm. It's work that becomes play. And, as George Sheehan says, only in play can "you realize simultaneously the supreme importance and utter insignificance of what you are doing. And accept the paradox of pursuing what at once is essential and inconsequential."  Not even a swig from Manitou's most lithium-concentrated mineral spring can come close to the feeling that running up a mountain with friends can give you!