A Slice of Pi(e)kes to Ease the Belly Blues

We all have our own share of demons and closet skeletons. My demons live in my digestive tract, my skeletons reside in my colon. So around this time last year I began modifying my diet. I traded food pyramid (or plate or whatever the diagram of the day is) for primal blueprint. I consumed eggs and bacon over cereal, meatza instead of pizza, and spaghetti squash in place of, well, spaghetti. Now, I'm not advocating this way of eating for everyone. I mean why avoid bread if it doesn't bother you. For me though, going grainless has made a huge difference. During my culinary quest, I came across tons of interesting information like "Why Grains Are Unhealthy." I read revolutionizing authors like Gary Taubes and Mark Sisson, and I learned of some remarkable stories like how Terry Wahls cured her Multiple Sclerosis (who knows if her results are reproducible but amazing nonetheless). And during the course of a year without a flare ups, I decided to drop my medications because I'd finally found a way to manage my ulcerative colitis.

Yep, things were really going well. So well in fact that I even found I could tolerate some grains every now and then without the world coming to an end. A cookie here, a couple beers there, and I was still no worse for wear. Had I cured my peristalsis plight? Well no. It turns out an overindulgent weekend with the foods I'd given up, brought on by a bout of hunger hubris, was all it took to resurrect my belly blues. The result: a 4 day sick-cation where the only traveling I embarked on was from the couch to the bathroom and back.

Things have greatly improved since then after resuming some meds and being more discerning about where I get my calories. And although I'm not quite back to normal yet, this weekend's monthly run up Pikes Peak to keep the streak alive was a big milestone.

When I opened my eyes Saturday morning, I wasn't so sure the attempt would be successful. Flurries were already coming down and Weather Underground was predicting "ice pellets" (credit to Andy W for pointing out that one!). So in my mind, the day's trek would likely end prematurely and stand as a reconnaissance run for a later attempt. 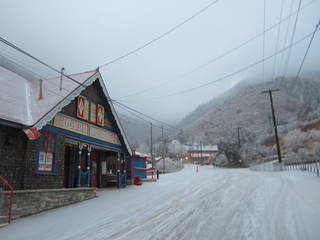 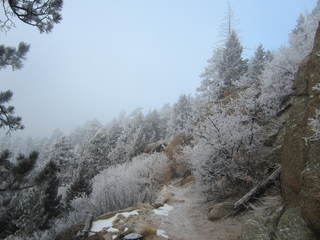 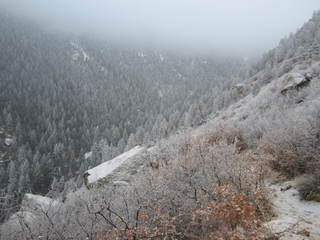 Three miles into it, I discovered that the pellet cloud resided only above Manitou. After getting the first glimpse of the summit, I knew it was going to be a great day at the top. [Looking back east towards Manitou] 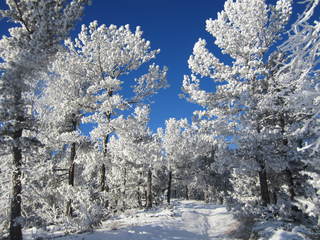 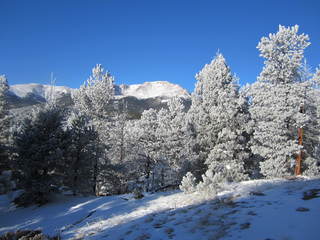 The trail to Barr Camp offered relatively easy running on packed snow. After checking in with Neal at Barr Camp, the white stuff got noticeably deeper. Thankfully Steve B and Chewy, who planned the same trip but with a 30 minute head start, broke trail for the next 3-4 miles. I spotted Steve (or possibly bigfoot) midscramble after A-Frame but never caught up with him. 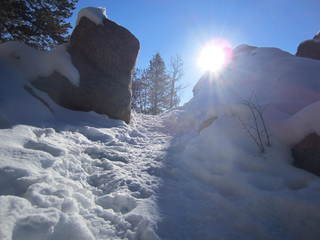 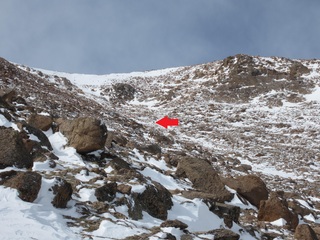 [Steve is the small speck just left of center]

One of the most critical parts of a winter Pikes Peak run is your strategy between A-Frame and the summit. Most experts agree that foregoing Barr trail at this point and scrambling to the top is best, however this still allows for limitless possibilities. An inside source recommended staying south of the summit and climbing along the ridge to avoid most of the snow and ice. 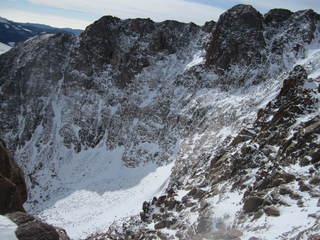 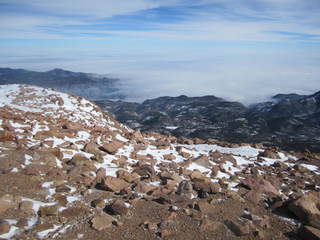 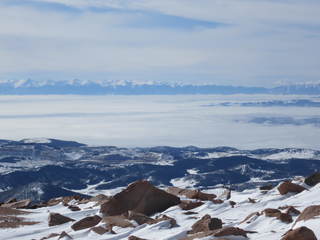 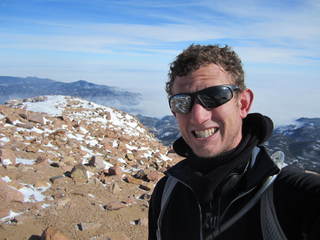 I was pleased with my route up but it turns out that having a strategy for the return to A-Frame is equally as important. Rather than sticking with my circuitous boulder/grass path, I decided the most direct way down was to use the snow/gravity combo and hone my Russian Crow sledding technique. I am 1/3 Lithuanian after all and that's got to count for something! In my display of exuberance though, I overshot A-Frame to the east somehow and ended up plowing through waist deep snow for ten frusturatingly laborious minutes before finding the trail again. Thankfully, the rest of the return home was relatively uneventful apart from some amazing scenery back in Manitou and that lingering ice cloud. 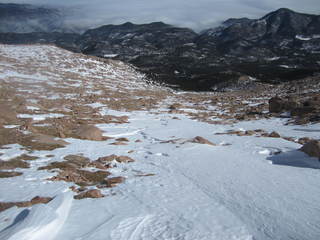 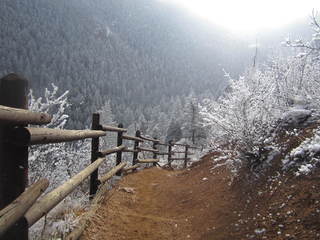 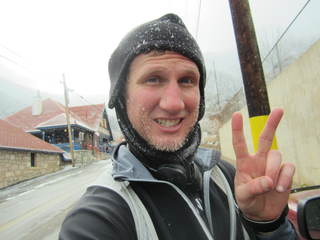 Been waiting for the right opportunity for this classic!