Let me preface what I'm about to propose with the following: I am an Inclinophobic.  I make the pilgrimage only a handful of times a year and when I do make the trek, I'm still not exactly excited about it.  It hurts.  A LOT.  And this anti-incline attitude is rooted in a similar aversion towards track repeats, 5k's, and other relatively short, intense workouts.  For runners who excel in the abovementioned arenas, one's merit is founded almost exclusively upon speedy PR times.  And just because the Incline is trail instead of track, the mindset for the most popular climb in Manitou is largely the same.  In fact, without fail, the number one question you'll be asked by a stranger along the way is "what was your time on the way up?"  But this approach mistakenly assumes a narrow-minded, linear hierarchy of traits.  It praises fast times over endurance; pure physical ability over the intangibles like mental toughness, stubborness, and stupidity.  And since the latter of which speak more to my talents, naturally, I propose a broadened perspective of our cherished Incline. 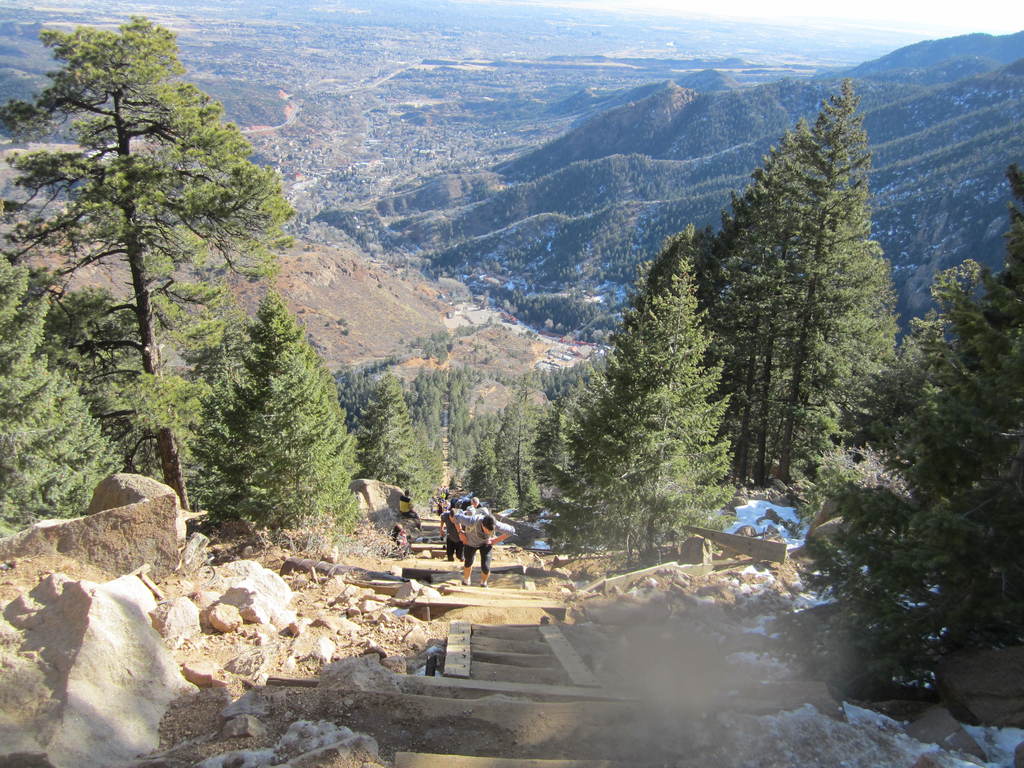 From the 300,000 to 500,000 who climb the climb each year, how many have completed back to back consecutive trips? Oh that's nothing, you say. You know tons of locals who've done that.

Alright, well how many would consider an INCLINE MARATHON?... I don't know...only the crazies?... The mind boggles!  Well ladies and gentlemen, welcome to the obsession that has occupied my mind over recent days.

As far as I can tell, the unofficial record time for the roughly 1 mile, 2,100 ft climb is 16:42 set by world class triathlete Mark Fretta.  But, does anyone know if an Incline Marathon has been completed?  Every once in a great while, as evidenced by Mark Pevoteaux's Jack Quinn's Ultra, a simple idea can inspire displays of pure awesomeness.  At this point though, the INCLINATHON remains JUST THAT, AN IDEA (largely due to legality issues you can learn about here and here and for those of you that don't know the INCLINE FRIENDS are hosting a membership drive to help make it legal and safe for all, but I digress).  In spite of these facts, let us examine the logistics of what something like this would entail, just for fun of course.

-If one were so INCLINED (sorry) to attempt such a feat, they could optimistically expect a marathon of 13 up-downs with 27,300 ft of climbing and 27,300 ft of descending, to take around 13 hours! I can tell you that after one trip up and down the giant staircase, my legs are pretty well fried. With that said, I think an Incline Marathon is totally doable.  And, hypothetically speaking, if this INCLINATHON were attempted (say Aprilish, again hypothetically) but found to be undoable, well it would lead me to an even better question.  Why not? Why couldn't I climb one more step... and then one more step after that...and then one more step after that? Fatigue? Injury? Boredom? Epic Bonk?  All these things are things that athletes, and nonathletes for that matter (except maybe the epic bonk part), struggle with routinely.  So then, why not a NON-ROUTINE struggle on the stairway.

Of course, with this new perspective, the INCLINATHON is simply the beginning. Just think of the INCLINE 10K t-shirts, or the 1/2 INCLINATHON race medals, or even, dare I say it, a 100 MILE ULTRA-INCLINATHON belt buckle!  Ah yes, the possibilities are as numerous as the stairs of the INCLINE herself!

Comment by Jill Suarez on January 23, 2012 at 1:46pm
Anyone who completed the entire fat ass 50k will agree after the manitou incline and red mountain running Waldo canyon was hideous .....it's gonna be a challenge

That would be amazing... of course, I am biased towards the loop using the Barr trail for the descent...  if you took the shorter/steep cut to Barr Trail from the top of the Incline, that works out to 7 loops...   just short of 6 loops if you take the true trail above the Incline back down the Barr..   at the risk of sounding masochistic... I'd love to give it a shot!   Note: I have yet to do multiple climbs... just a twice a week climb, with the return on Barr.

I can think of only one image as you ask, "Why not?" You remember the infamous video of the ladies hitting the wall at the end of their Ironman race? Yeah... That may be why not.

Comment by Jill Suarez on January 21, 2012 at 10:52am
I'm sure folks will find out the clear advantage those of us who run this up and down will have =) let the training begin !!