In my circle of friends, it's a common occurence for inanimate, yet cherished objects to warrant a name. And before you start judging, this phenomemon is apparently fairly rampant in our culture. Ships have been named for presidents from the U.S.S. Washington to the U.S.S. George H.W. Bush. Herby and Kitt were both beloved automobiles. Even a healthy dose of the entertainment I enjoyed as a kid including The Brave Little Toaster, The Velveteen Rabbit, and Winnie the Pooh were all founded on the personification of nonsentient objects. So whether it be a car, a sleeping pad, or a food processor, if it's loved, or at least holds some position of importance, it deserves a name.

Lately, I've found myself bestowing names to various physical ailments that arise during my runs. With the exception of Alex Trebek, my Anterior Talofibular ligament that failed to answer "How much Incline is too much Incline?" in the form of a question, I've not had any major debilitating injuries lately. Instead, I've had a lot of "minor discomforts" which means I've made a ton of new friends. My newest acquaintances and I met over some tendonitis in my right foot. Apparently Tim Allen (Tibialis Anterior) and Ernest Hemingway (Extensor Hallucis longus) got into a bit of a quarrel that lasted several weeks. I'm happy to report that they've now have agreed to bid Farewell to Arms and reconcile their differences.

Some friends come and some friends go and the same is true for your imaginary injury friends. Years ago, I recall being on the outs with Tom Petty and the Heartbreakers, my left Tibialis Posterior. We had a tough couple of months together and I finally told him "Look Tom, Don't Do Me Like That. I'm Running Down a Dream here." Ever since that day, Tom has not been a part of my life. In retrospect perhaps my words were a bit harsh because while I certainly gained a healthier leg, I lost a dear friend in the process.

All this silly naming business started on a recent Grand Canyon trip when, in a stupor of dehydration, I began experiencing some left flank pain. With an empty Nathan pack and a couple miles of 100 degree canyon climbing left, I resigned to do the only thing I could. I had to distract myself from the reality and make light of my current situation. And it was in those miserable miles that Simba (Left Kidney > Lion King > Simba) and Rudyard Kipling (Right Kidney) were born. While Simba has been relatively tame since that day, his partner in crime has been another story. This week I spent 5 hours in the E.R. after Mr. Rudyard Kipling rubbed me the wrong way by serving me a glass of Merlot, instead of my preferred Sauvignon Blanc at a wine party. Fortunately, the urinalysis, bloodwork, and CT scan all checked out with no tumors or stones. The doctor informed me he suspects that good ol' Uncle Buck, my Urinary Bladder, may be the culprit. 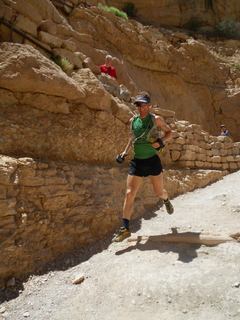 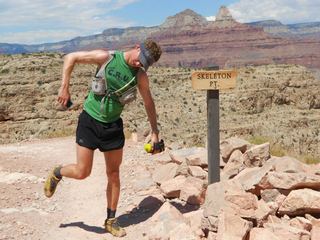 I'm honestly not sure what can be concluded from this psychosis of mine. Perhaps making the pain more human is a brilliant coping mechanism to separate my identity from that of an impairment. On second thought, it's probably more likely that this nomenclature nonsense is just a sad and unhealthy denial strategy. In either case, at the very least I'll have another mind game to play once I sink to new lows at Leadville. Who knows. Maybe Ian Thorpe, the Thorpedo" will introduce himself should my IT band get a little tight coming over Hope Pass. Or perhaps Annie Lennox, my Adductor Longus, will serenade me with the song of cramping, over the Powerline climb.

In any case, I invite you to start making friends with what ails you. And, if this thing takes off, there could be a potential business idea brewing. I don't know if you realize this but they've aleady got giant microbes for sale where you can snuggle with Syphilis, embrace E. coli, or just get cuddly with C. Diff. So picture this if you will: a knee cap with a SoCal teenager vibe that says "Wheeze the Juice" when you give it a squeeze... it's the Pauly Shore Patellofemoral Syndrome Doll! Now who could say no to that?

Well all I can tell you is my Larry Bird (lower back), and my Sole Brother (soleus) are killing me.