My Monday through Friday gig is incredibly rewarding.  In fact, I still have a hard time believing I get paid to laugh and play with kids while helping them function more independently. Nevertheless, job related stress or perhaps the unwelcoming darkness and cold of the season has contributed to some pretty inconsistent weekday training sessions as of late. But, as one of my professors advised, "you are not your job." So no matter how many pre-work runs I miss, the desire to fill my weekends with incredible adventures remains continuously high. And whether it's climbing Pikes, running a Fat Ass race, or training for the INCLINATHON, the sure-tell sign of a great weekend is a healthy dose of sunburn and utter exhaustion come Monday morning.

Salida was the location of my latest jaunt. Harsha and I drove down early Saturday for the 9:00 marathon. Meeting us there was a healthy representation of other CRUDers and loads more friends and familiar faces from the entire front range. Being that Leadville is my A-race for the year, I didn't obsess about tapering and kept my expectations for the day in check. Still, I'd be lying if I said I wasn't looking forward to finally kicking off the racing season and pushing the pace beyond that of a regular training run.

I'd not been to Salida before, but apparently the course this year promised less road, more single track, and more elevation (about 4,750 ft of total gain/loss) than in previous years. From the get-go there was a lot of fast energy, being that this was "just" a marathon. Seated at the tail end of a drawn out lead pack, my first two miles came in at 6:49 and 6:14. And while I was momentarily seduced by the early speed, this was no road marathon. Plus, with marathoners and half marathoners running the first 4.7 miles together, it was difficult to guage positioning early on in the race and whether folks would be holding the aggressive pace for 13 or 26 miles. So whether I liked it or not, the pace slowed to something more appropriately sustainable once we began climbing Tenderfoot Hill. 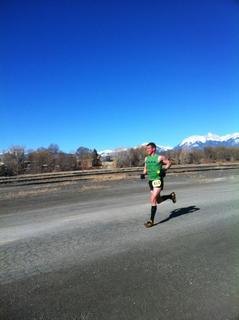 A deliciously serpentine single track continued until about mile 8. At this point, a group of 5 including Drew, Kyle and myself had finally reeled in Patrick S shortly after hitting CR 175. In previous years, the course had apparently included much more of this road and I'd heard the grade was much like that of Rampart Range Rd. Having this bit of knowledge though didn't seem to ease the sadness that came with bidding adieu to twists and turns of the trail. 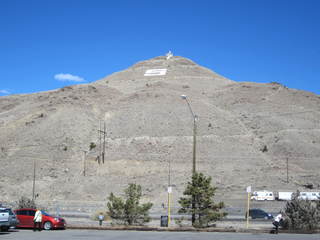 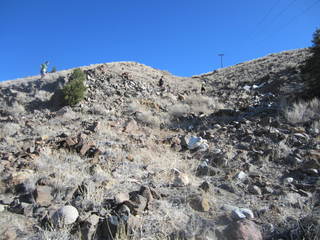 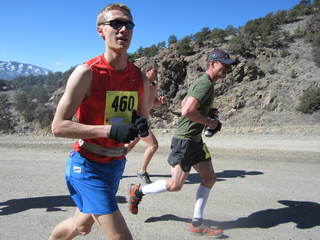 After about 5 miles on this road, we doubled back for 3/4 of a mile before hitting an ATV road to began the other half of the loop. The brief out and back let me know who was ahead (Nick C, Timmy, Jason, Nick P, xx, Eric, and Drew) and who was on my heels (Kyle and Patrick). Up to this point I was feeling pretty good- in control of the pace and effort and planning to be poised for a strong finish. Yet despite the fact that the bulk of the climbing had been completed over the first half of the race, a myriad of soft mud, snow, and ice made the gentle rollers on the net downhill a lot more difficult than they should have been. It didn't take long for me to realize that the strong finish I envisioned would be a pipe dream. Kyle, vibrams and all, had passed me early after the turnaround and I knew I wouldn't see him again until the other side of the finish line (he turned in an impressive 4th place performance). The mind was willing but the body was week. And somewhere along the descent, my gastrointestinal system and gastrocs all at once decided that they'd had enough fun and I found myself holding back more than I'd like. Thankfully, nothing happened that required me to come to a complete stop, but that still didn't shake the paranoid feeling that a top 10 finish was potentially slipping away.

Apparently though, mine was not the only carnage. I caught up with Drew and shared a couple minutes of what probably looked like some pretty pathetic snail racing before "pulling" away. And not long after that I slipped past another one of the front guys who was also hurting pretty bad. Such an amazing phsysiological and psychological shift occurs when you're flying one minute and the next, your world is falling apart. The last, and perhaps most unfortunate example of this came with less than a half a mile from the finish. There I found Timmy, who was leading the race with Nick C at the halfway point, now hunched over and impersonating dinosaur roars on the side of the trail. So somehow, despite feeling less than fresh, I managed to hold it together well enough for a 6th place finish in 3:29 and change. Full results here.

The Run Through Time Marathon was a great way celebrate the start of 2012 racing. It offered a fantastic blend of competitive camaraderie and technical trails and will be high on my list of races to consider for next year. For now though, with no real racing again until May, I'll be hitting up the stairmaster in preparation for the next big weekend war- INCLINATHON!