The Driver of Hinnies

"HIYAAH! HUMDADDY! HEYOOOO! GIDDYUP!" These words, so unfamiliar yet somehow instinctual, emerged from somewhere deep within my soul as I belted them into the air above Clear Creek Valley. Bandit, the burro I had been introduced to just hours before, was hitting his stride as we left the town of Empire and headed back to Georgetown. Positioned just behind Bandit's right hip, I ran hard while twirling the end of the lead in my right hand. Grinning from ear to ear, I picked up speed as Bandit shifted gears from a trot to a canter. We were flying! 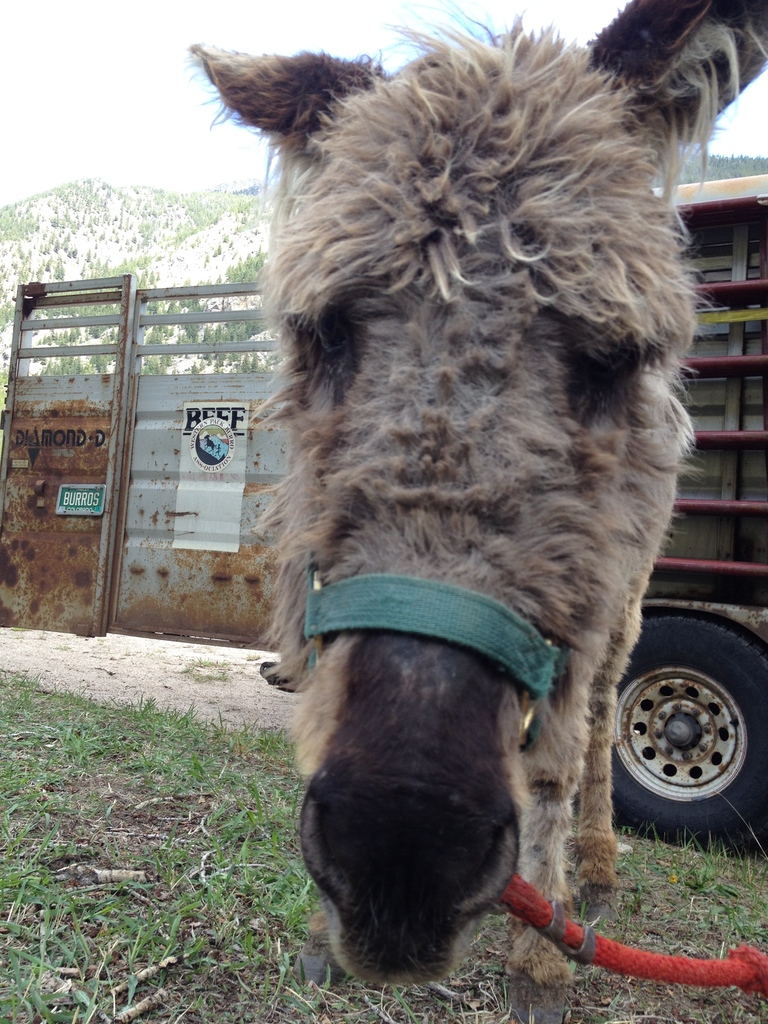 Like surfing is to Hawaii, mushing to Alaska, and stock car racing to North Carolina, pack burro racing is the official state sport of Colorado. A tribute to the mining days, according to the Western Pack Burro Ass-ociation, the origin of the sport comes from the legend of two miners who raced to town to stake a claim after finding gold in the mountains. Modern iterations of the sport are a throw back to the mining era as today's racing burros are required to carry a 33 pound load consisting of mining tools like a shovel, pick, and pan. Man is connected to donk by a 15 ft lead but is not allowed to ride. Instead, the teams are tasked with covering courses ranging from 4 to 29 miles on foot.

Intrigued by this history and absurdity of such an event, I decided to reach out to friend and seasoned burro racer, George Zach. George, along with his donkey Jack, have been burro racing for 6 years. The team has a historic bond and won the prestigious Triple Crown of Burro Racing in 2015, a series consisting of 62 miles of racing over three consecutive Sundays in Fairplay, Leadville, and Buena Vista. Over the years, George has developed a rapport with Bill Lee, owner of Laughing Valley Ranch, and caretaker for a multitude of livestock, including burros. Bill transports and rents his burros to interested racers and it was through these connections that I found myself racing the 13th Annual Historic Georgetown Railroad and Mining Days Pack Burro Race. 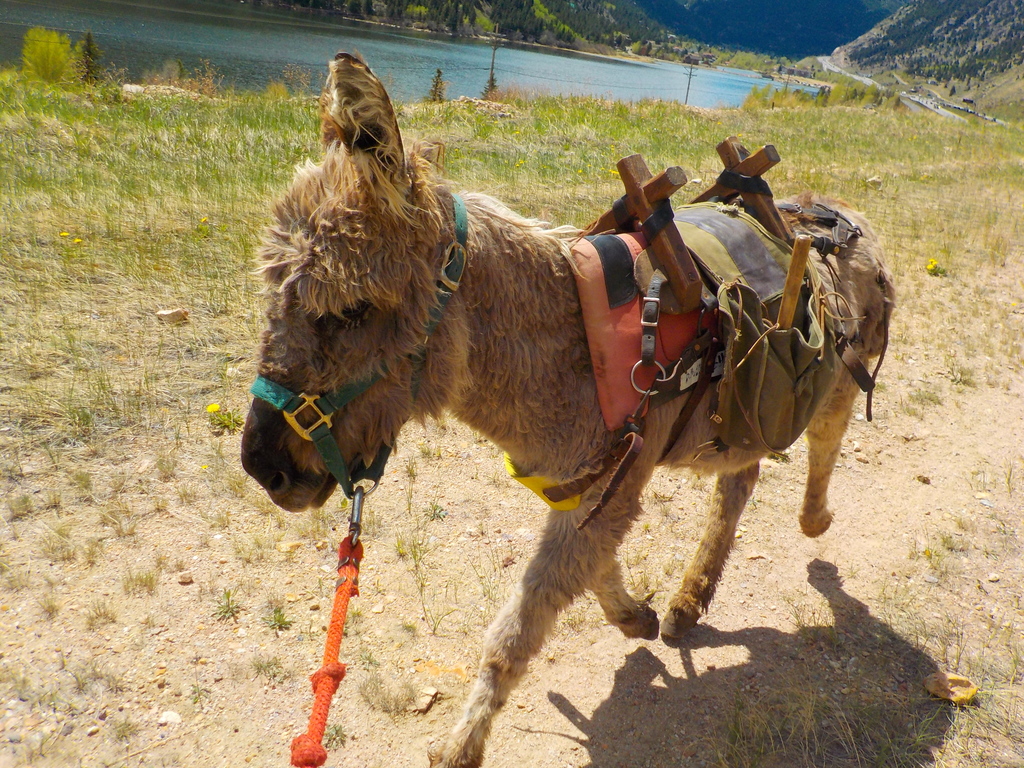 Before the race, my mom shared with me information on the meaning of her maiden name, Bordonaro. Apparently this Sicilian ancestral name represented an "occupational name for a muleteer (strictly speaking, a driver of hinnies, the offspring of a female donkey and male horse)." A good omen? I certainly hoped so!

On race morning, after a couple of hours of grooming, saddling, and otherwise bonding, Bandit and I joined the parade of 60 other teams to march onto Georgetown's Main Street. In the field were fast and experienced burro racers including George, Justin Mock, Brian Metzler, and Bob Sweeney. There were also fast and relatively inexperienced burro racers like Shad Mika and Anita Ortiz. We were warned that unless you were prepared to sprint a 5 minute mile or be trampled, to not line up at the front. Self preservation instincts won out for most of the newbies as we happily lined up towards the back of the pack. With a pistol shot to start the race, the burros surged ahead in an adrenaline fueled stampede with runners in tow. The start of the race is what I imagine Pamplona's running of the bulls to be, just without the horns. I have never witnessed more race carnage in my life. Within the first 10 seconds, the feet of one of the front runners became entangled causing him to somersault to the pavement and lose his grasp on the lead. I saw him minutes later, running solo trying to catch his donkey as it continued to run away (race rules require that once you catch up with your donkey again, you are to return to the exact point where you lost control). A half mile down the road, yet another tandem was in peril as they started to weave back and forth across the street. Simultaneously horrified and amazed, I witnessed the runner go down, but unlike the episode I had just observed, this runner refused to relinquish her grasp of the lead. No, instead she buckled down and clutched the nylon cord with two hands, barrel rolling all the while as the burro continued to drag her 15 ft on the gravel shoulder of the road. Once the animal eventually stopped, the runner rose to her feet, flicked the road rash debris that extended from her hip to her knee, and continued the race. Burro racers, I discovered, were a really tough breed!

Other than having my foot unintentionally stepped on, Bandit and I successfully avoided calamity. And, largely because of this avoidance of maiming or dismemberment, the race was incredibly fun. There were times that we moved fast, there were times that we moved slow, and there were times where we didn't move at all. Along the 9 mile course from Georgetown to Empire and back, we covered asphalt, frontage road, and single track trail. We raced in isolation, as well as in a pack, both as leaders and as followers. And along the way, through observational and implicit means, I learned tactics that worked well and not so well. You see, there were no "Burro Racing 101" or explicit instructions on best strategies. While I watched most of the Haulin' Ass film, that was pretty much the extent of my burro racing education. As a beginner, I simply made an effort to observe those around me and invest my attention on Bandit's subtle cues and responses. Was it best to stay in front, beside, or try to drive from behind the donkey?  Should I push Bandit into a faster canter now or be content with a slower trot, or even a walk. Ok, now he's blocking traffic in the middle of the roundabout and refusing to move. Now what?! In the hours we spent together, Bandit was learning my mannerisms and motivations, just as I was learning his. 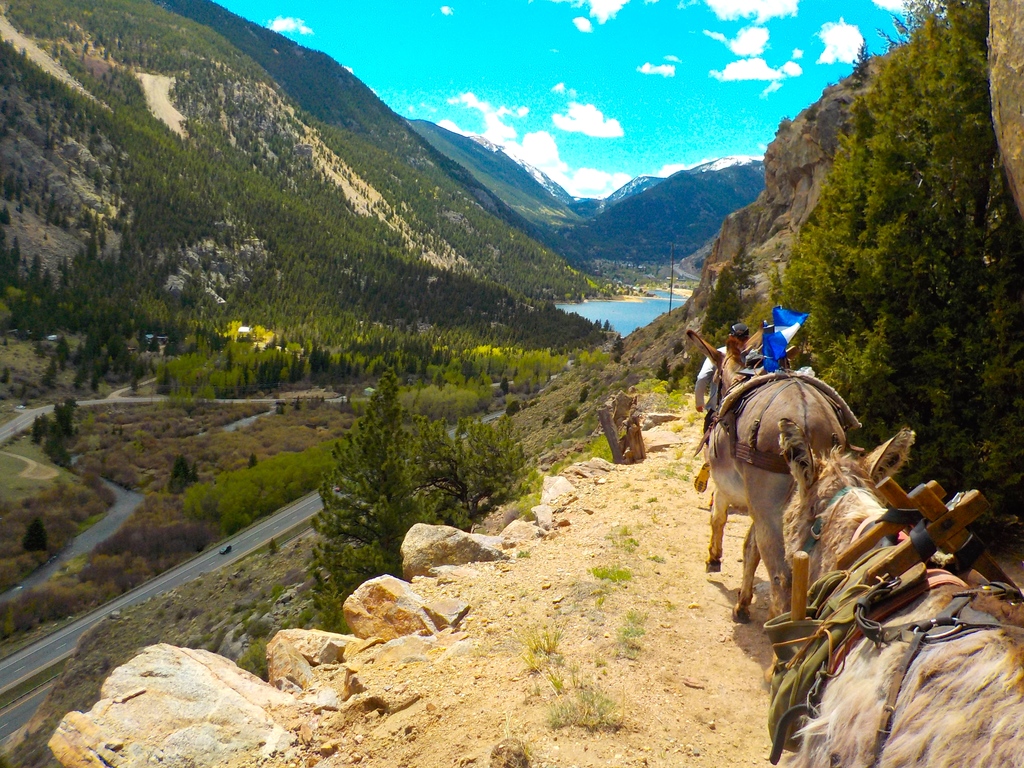 Following the pack on our way back to Georgetown

Ultimately, Bandit and I completed the course in 1 hour and 53 minutes for a seemingly forgettable 29th place. Perhaps a bit disappointing, unless you consider that this was faster (by three minutes) than when he competed alongside another runner last year. I'm not one to poo-poo progress, no matter how small, so I'll accept the result as a win! At the end of the day, Justin Mock and Yukon were the overall winners of the race, completing the course in just over an hour. 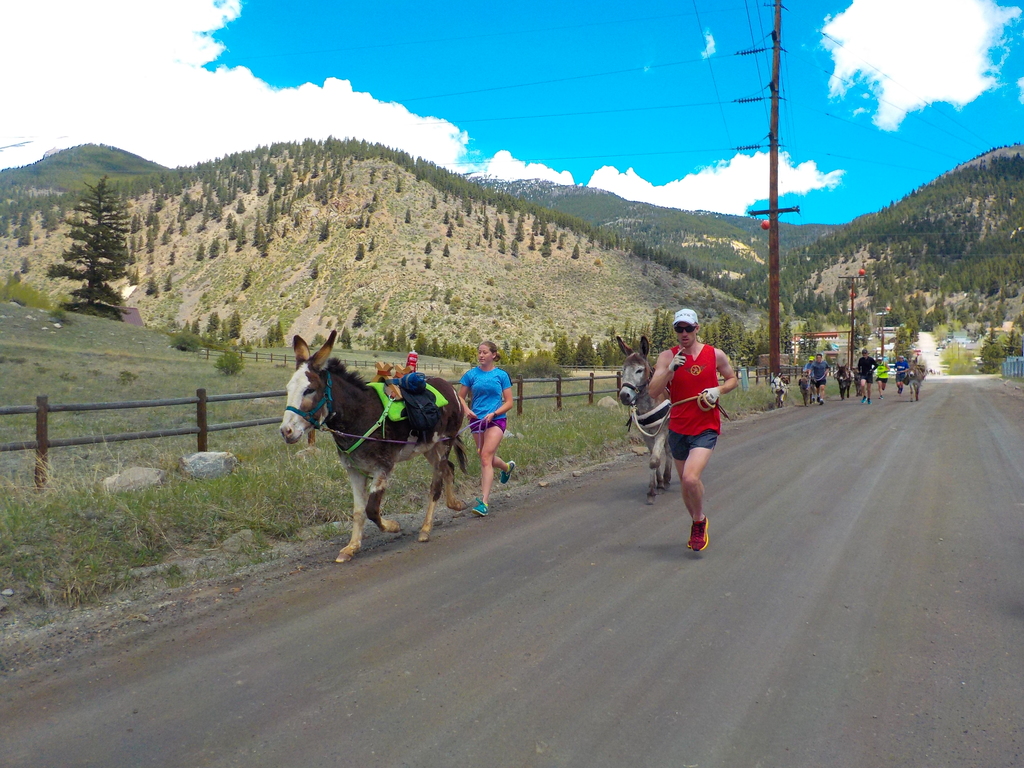 If you asked me what my impressions were regarding pack burro racing, my first response would be that it was frustratingly exhilarating. Or maybe it was exhilaratingly frustrating?  In any case, as a beginner with no expectations other than to avoid being trampled, the prospect of potential improvement has me wanting more. What appeals to me is that while running fitness has some value in the sport, it's no more valuable than other components like the relationship you have with your burro, your handling skills, your behavioral psychology knowhow, and even your propensity to be lucky. And what matters most, for beginners at least, is how much can you learn in a short amount of time.  That's the piece that I particularly enjoyed. Being tasked with stepping outside of my comfort zone and developing previously foreign skills, strategies, and tactics in a finite window, while the race is happening. True, driving a burro from behind may not be a skill applicable in many modern settings for most of us. But humility, patience, and being able to not just learn, but to learn how to learn quickly certainly are.

In the end, it's the subtle mix of a variety of components including skill application, physical ability, and chance that make this sport so oddly appealing. Because of this, I'd say that there's a very good chance that me and my ass will be back. With some more bonding time and training sessions together, you could be looking at the next Triple Crown of Burro Racing champions! 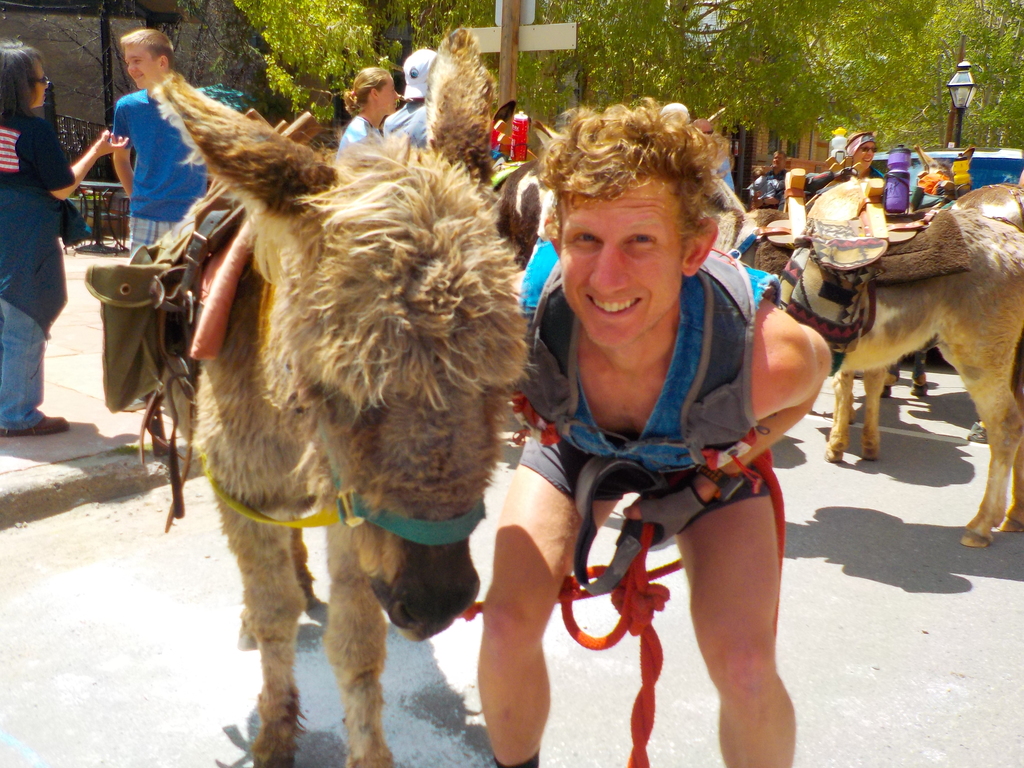 We may not have won the race, but we definitely won the "Man/Burro Look-a-Like" Contest!

Hilarious Brandon!  And you do kind of have the same hairdo.....lol