Unpacking Lessons from The DuDe. Part 1: The Pack, the Sleeping, and the Eating

A week of binging on naps, Netflix, and ice cream have passed since tagging the Waterton Canyon terminus of the Colorado Trail. During this time of intense recovery and in between slumbers, I've summoned as many details of the experience as I can, realizing the limitations that come with attempting to encapsulate a 485 mile trip by tapping keys on a computer. Words, pictures, and video can do a lot but ultimately, they are only representations of the experience. Still, these representations have value in serving as more tangible mementos of the past and can hopefully inspire us to embark on adventures in the future. It's with this in mind that I'll do my best to unpack my self supported trip from Durango to Denver, an adventure dubbed The DuDe. Detailing a 9.5 day adventure can be cumbersome so I've decided to break it down into a couple of parts. Part 1 will address questions I've received regarding details of the pack, the sleep system, and the food plan for the journey. I'll identify what went well and what went, eh, not so well.  In Part 2, I'll cover the trip itinerary and what my body and mind went through during that week and a half. So without further ado...

The most pertinent details for this trip or any self supported endeavor concern the items that accompany your journey. How much or how little we need, or think we need, can have huge implications on the comfort, safety, and success of the trip. Training and trip planning mean nothing if you take more than you need or discover you're missing some critical piece of gear. If you're starting from scratch as I was, it's suggested that you first start obtaining your pack contents and then find a pack to accommodate those items. However, an opportunity to use and review the UltraSpire Epic pack came to me through friend Tom Caughlan and so while I was willing to go with a larger pack if things didn't work out, there was a definite incentive to try to make the Epic pack work. It turned out to be a fantastic choice.

In comparison to traditional backpacks, the Epic uses a more familiar (to me) running vest style with tons of easily accessible storage on the shoulder straps and hip belt which made snacking, accessing water, holstering and unholstering a camera, and checking the map while on the move nearly effortless. The 25L capacity is not huge by backpacking standards. In fact, I had a difficult time finding anything of comparably small size other than the Ultimate Direction Fastpack (30L), but I appreciated how this space limitation forced me to really consider what I need and what I could live without.

While, 25L doesn't sound or even look like a lot, I was impressed with how much it could store. The pack has a main 11L compartment that I lined with a trash compactor bag, cut to match the dimensions, for water proofing my gear. Rather than using my stuff sack, I placed my collapsed sleeping pad and pillow, tarptent, and bulk of food in the sewn foot of my quilt and stuffed the excess material around the cavity to create a "cloud" of cushioning. This made it so that no points or corners would create a rubbing point through the pack and saved my skin from annoying hotspots and blisters.  Outside of this main compartment, the external mesh pocket held miscellaneous items like my headlamp, extra Sawyer squeeze water bladders, my poncho, discarded clothing like calf sleeves, gloves, and tights, and any excess food. The brain compartment up top held my wind/water resistant jacket and down vest.

Storage is great, but it's even better if it's accessible on the go. Between the right and left hip belt pockets was enough storage to stash away two day's worth of snacks and the bilateral front shoulder strap pockets held my 16 ounce squeeze bladder with filter, chapstick, map, GoPro, cell phone, CT data book, and extra batteries.

While the trip would consist of mostly hiking, I hoped to run at least a little bit each day as the terrain permitted, so having a light pack that ran comfortably was essential. I was very pleased and thought the Epic allowed me to run comfortably as possible with 15 pounds on my back. It has multiple adjustment straps that can be fiddled with while the pack is donned and the hip belt helped limit resistive pack bounce. The only real issue I had was some upper trapezius soreness that arose on the second day. This was never an issue during training, but a little soreness after consecutive days on the trail is expected. Luckily, I was able to resolve this by experimenting with the two  bungee chest cords and using one or oftentimes neither of them, allowing the pack to sit wider on my shoulders and offloading the muscle bellies. After that small change, there was no discomfort whatsoever.

The pack comes with a rain cover which wasn't used during the trip but proved impenetrable with a poncho during training. The only issue I had with this was the rubber zipper tag rubbed my back at times if I didn't make sure to tuck it inside the lower stowaway compartment. Aside from those small findings, the only other qualm I had were some minor durability issues consisting of a couple small tears during training (one in the main compartment and a one in the mesh lining of one of the hip pockets). Both were identified before my trip and easily patched with a little duct tape. Once patched, the imperfections didn't impact the pack's function at all.

From a comfort and capacity standpoint, the pack fit my needs perfectly. Admittedly, I demanded a lot from this pack and had some concerns that the seams would hold for such a big trip but it ultimately held enough gear for me to go 3 days before a resupply. You may be hard pressed to go much more than 3 days with a 25L pack but if I had to do it again, I'd definitely adventure again with the Epic. This sleep system worked incredibly well for the trip and kept me warm, dry, and offered the opportunity for as much rest and recovery as I could get. Using a TarpTent Protrail, inflatable sleeping pad, quilt, and wearing all my clothes to bed most nights, I slept plenty warm, even when above 12,000 ft with temperatures dipped below freezing. The Protrail offered bug netting and flooring which was greatly appreciated when the mosquitoes were particularly ravenous. Two trekking poles were used to support the tarptent's A-frame structure and this allowed for some space and weight savings in my pack. My only issues with sleep quality concerned some hip discomfort but this was more a product of muscles adjusting to carrying a 15 pound pack for 50 miles a day rather than any deficiencies with the sleeping pad or system as a whole. Incredibly, I encountered no rain on the trip so I can't speak directly to the shelter's water resistance, though I did seal the seams prior to leaving, just in case. 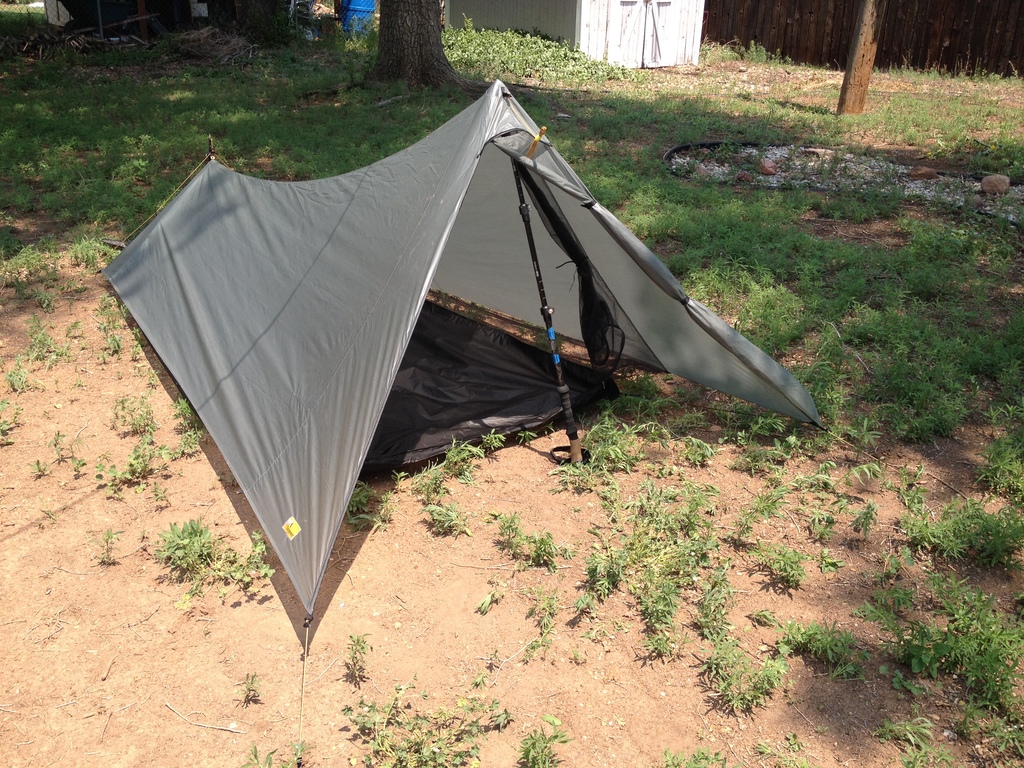 My food plan was solid. About 1,200 calories for breakfast and another 1,200 for dinner in the form of peanut butter variations, plus about 200 calories every two hours while moving during the day would put me around 4,000 calories for the day. Plenty, and maybe perhaps too much food. In practice, this remarkable plan worked well for the first couple of days before becoming unsustainable.

It turns out that eating homemade peanut butter meal concoctions out of a bag is actually pretty gross. While devouring a brown (black if cocoa powder is added), semi solid mass out of a plastic bag in the middle of the woods and having the remnants all over your face may spare you the need for utensils and sound like a fantastic way to live, I'm sure it was quite off-putting to any witnesses. Appearances aside, while the concoctions that I came up with like bread-less peanut butter and jelly (raspberry Skratch powder stirred into peanut butter), seemed good while making them, they just weren't very appetizing after a while on the trail.

Unfortunately (or perhaps fortunately), at my second resupply point, I made the discovery that ziploc plastic was penetrable to peanut butter oils. I sent the resupply packages almost two weeks prior and, after arriving at the Monarch Crest Souvenir shop 4.5 days into the trip, used the tip from my trekking pole unbox my package. Waiting for me were sad, leaking bags of peanut butter which had seeped oil through the double layered ziploc bags pathetically meant to contain them. Lesson learned: you need to eat something other than peanut butter or find a better way to ship it.

Now, with my primary source of calories rendered messy and useless since carrying them would mean contaminating all of the other contents of my pack with a greasy, greasy mess, I needed a plan B. As I devoured a Frito Chili Cheese bowl at the Monarch gift shop, I thought that I still could make it 3 days subsisting off of the snacks I planned for throughought the day (Lara Bars, Epic Bars, Babybel cheese, salmon jerky, beef jerky, individual peanut butter packets, trail mix) and eating a summer sausage for dinner rather than the peanut butter bomb. Additionally, there were a couple more solid, brownie-texture items that proved salvageable. So while I threw away around 10,000 calories that were in the original plan, I walked away feeling ok about the plan.

Three days down the road at McCoy's Mountain Market in Copper, my last resupply point, I confirmed my hypothesis that peanut butter ships poorly in plastic bags. In a fit of impulsiveness, hunger, and gluttony, I purchased $45 worth of candy bars and a french salami from Cameron at the counter. My plan was again, 200 calories every 1-2 hours on the trail in whatever form seemed palatable and to finish the day with a 600 calorie stick of meat. I was certainly lean on food at times, eating ~2500 calories/day on the low days, but could at least eat with decent frequency by sticking to this eating schedule. In the end, I finished with no food on me and was hungry for a real meal, but never went more than a couple of waking hours without eating something.

Coming up with items to keep you warm, safe, and satiated for 10 days on the trail was an intimidating task but in the end, I feel like my arsenal was surprisingly, and thankfully complete. Other than occasional food cravings, there was never a moment where I said to myself, "OH I REALLY WISH I HAD THAT" or even worse "Oh I REALLY NEED THAT." And while there were a handful of items that weren't used (poncho, first aid kit), they were obviously necessary to bring for unpredictable weather conditions and scenarios. At the start of the trip, the pack, with 16 ounces of water and a day and a half worth of food weighed in at 15 pounds. Depending on the amount of food and water I toted along during the journey, I estimate that the pack weight ranged from 12 to 16 pounds each day which felt like a manageable amount for the distance. With that said I think I'd struggle a lot with anything much heavier.

Below is the gear the pack accomodated:

Below are clothing items I started with on my body which were also stored in the pack from time to time:

Nike Zoom Wildhorse 3 (~150 miles on them at the start, held up incredibly well)