With a low mileage, metatarsalgia-ridden month that somehow led up to a 9 hour birthday run the week before, to say I felt a bit ill prepared heading into the Devil Mountain 50 miler is an understatement. But after surprising myself at the Pikes Peak Marathon, the thought of doing one last 50 miler before the year was out seemed like a good opportunity to squeeze a bit more suffering to satisfy my masochistic cravings until 2012. As an added bonus, a strong representation of local CRUD runners would also be making the trek to race in one of the three races put on by Morgan Murri and the GECKO organization.

Along the 4.5 hour drive to PS with Harsha N, we talked about the course and the results from the previous year. A mere 6 runners finished the summer event in 2011 and the winning time was over 12 hours. We had both run the San Juan Solstice in June, which is touted as being one of the harder 50's in the country, and were doubtful the next day's undertaking would rival in comparison. Nevertheless, even at packet pick-up we were assured by one of the race masterminds that, in his opinion, the course would be Jemez-like (another very difficult 50).

After one of the most disproportionately restless nights in an ironically comfortable bed, which is the way things go more often than not, the alarm rang and it was time to get a move on. Two miles on a short but dusty dirt road led us to the field. and by field, I mean quite literally, JUST a field. I'm not sure who was more shocked at 6am, the bovine with headlights glaring in their faces or the small gathering of runners dodging cow patties (or not) on the way to pick up their race numbers. As the sun rose, more and more running buddies became distinguishable from the darkness.  Paul D, Rick H and his wife Jill, Shannon M, Lon R and even Brendan T with whom I've had the pleasure of running with for two other races this year. 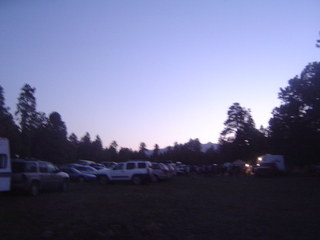 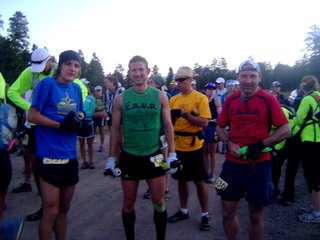 The 50 milers and 50kers would start together with 1/2 marathon folk leaving a bit later. About 100 gathered to toe the drawn-in-the-dirt starting line and off we went. The first couple miles on the dirt road were flat and fast as stray cattle and deer cheered us on. Brendan and I caught up and discussed future endeavors at the front of the pack until a group of 3 took the reigns as we traded dirt road for a bit more technical jeep trail. And just before this lead pack gained enough distance to disappear, I was able to hear an exchange between runners, one apparently a K'er, the other a M'er. My objectives going into the race were to stay steady, feel good during the race as well as at the end, and to avoid meeting the colossal whole body cramp that introduced itself in Lake City. I didn't want to feel like 50 miles was a questionably attainable distance to cover as I had felt earlier in the year but rather a tune-up for the big leagues, the 100 milers. Still, sitting 2nd at best, 5th at worst for the 50 mile race, with no visible runners trailing felt pretty darn good and I began to cautiously entertain thoughts of a top 5 or maybe even top 3 finish. 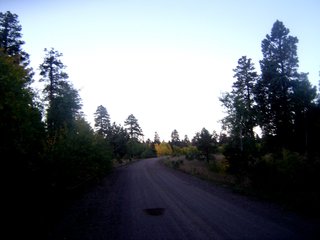 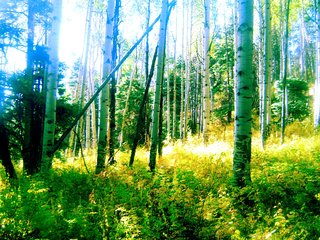 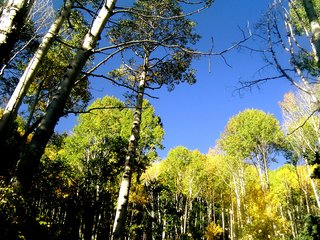 Brendan and I continued to run together up and over the mountains Chris, Devil, and Horse. And while he led the way for most of our day together, around mile 20 or so he confided that he wasn't feeling spectacular and was planning on taking the 50k route at Aid Station 4 (Brendan finished 11th at Leadville 100 on his first go at it and will be pacing at Slickrock 100 next week). 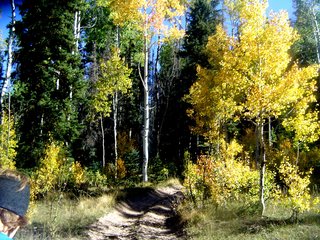 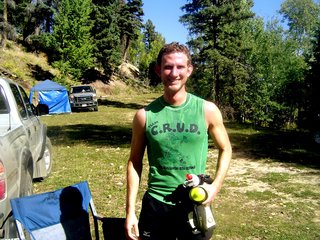 From a birds-eye-view, the course outlined a cherry on a curved stem- the 50k folk just didn't do the stem part of the run. Also, you could sign up for the 50 mile with the best intentions but if you weren't feeling it, drop to the 50k at Aid Station 4 and home was only 8, instead of 27 miles away. The ATV Club folks at the aid station informed me that only one runner had taken the 50 mile out-and back option at that point about 10 minutes ago. 23 miles had gone by fast with company and although I knew I had more than 8 in me, 27 solo miles suddenly seemed a bit daunting. I may have stayed a bit longer fueling up but shouts of more runners coming down the hill gave me reason enough to get a move on.

The next miles presented some tricky sections of irregular, hardened-mud footing interspersed with sloppy, grab the shoe off your foot muck. The course then afforded some fantastic meadow views before dropping down a steep and gnarly overgrown game trail. Quite possibly the nastiest section of a trail I've come across on any race, it made running out of the question for me and I was already dreading making the return trip. Finally as I entered another open meadow, the footbridge over the Piedra River came into view. Now the entire course had been marked beautifully by pink trail markers. At the San Juan Solstice, most had been lost at least twice in the first 15 miles, yet nearly 30 miles into the race I had not second guessed a single turn. That was about to change. After traversing the bridge, I salivated at the well groomed single track that lay before me following the river. Surely now I could work to bridge the gap on the guy ahead, or at least distance myself from anyone on my heels. This had to be one of the best sections I'd come across all day on the course. Well, except for the fact that it was not actually on the course.  Fortunately, some hikers questioned my route and after realizing "You know, I haven't seen any of those pink ribbon trail markers in a while," I about-faced, desperately looking for the last marker. Almost a mile of retracing led me to a line of markers on the right that dotted a steep climb that lacked any legitimate trail. 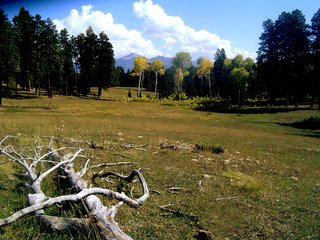 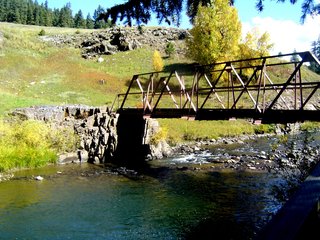 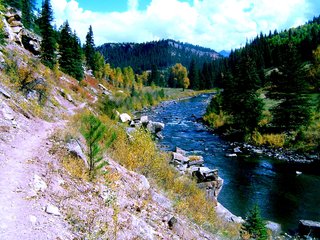 Luckily, fellow CRUDer Rick H had just scampered into the woods at the top of the climb and gave me a glimpse of hope that I hadn't lost too many positions. At Aid Station 5, the course dipped back down south for 3 miles to Sally's Overlook, at which point runners tore a page from "WARLOCK ROCK" (proving they made it all the way) and returned to the aid station. Though arguably a less creative approach, I like an out and back segment of a race. One, to encourage friends, strangers, and fellow sufferers as they pass. And two, well, to see how you stand. After 31 miles of running, this stretch finally let me see the entire field of runners. Where they are. How they're moving. The runner in front of me, Eric, seemed to be doing well and running strong as I never saw him running the same direction. I did notice however, that he seemed to be stopping longer and longer at the aid stations. On the second time around at Aid Station 6 (the Aid Station formerly known as Aid Station 5), I spotted Eric going to town on some sodium laden Ramen noodles. Running is always better with some company so I proposed we work together over the next stretch. I learned this was his first go at the distance and he was doing an incredible job. As we trekked up the Incline-steep overgrown game trail, Eric's wheels began to fall off and he slowly dropped off the pace. 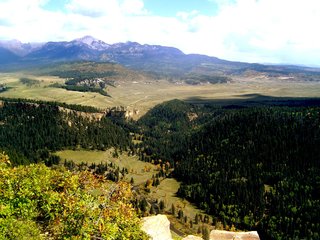 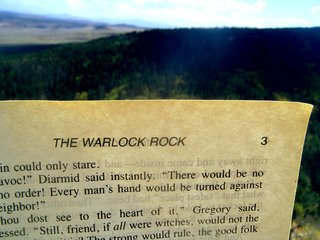 For the first time of the day, I was leading the pack! It's not a position I've had much experience and I honestly can't say I enjoyed it too much, at least during the run. I'd much rather be the hunter than the hunted, but with 5 miles to go at the last aid station, the race was mine to lose. 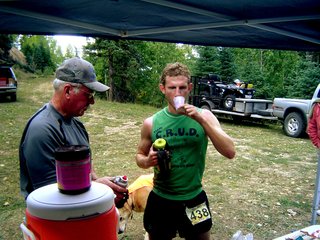 A healthy case of paranoia followed me down the last wooded descent to the dirt road at which point there were 3 miles to go. I was a deer just waiting for the hungry mountain lion behind me to pounce...except it never happened. A small crowd, including the RD, rang cowbells and cheered at the finish as I crossed in 9:51. In a field of 30 runners, someone had to come in first. Today, I was lucky enough that it was me!  My CRUD buddies represented Colorado Springs well and posted some awesome times (especially Rick H who finished 2nd!). The women's race was really competitive as well with Reese R running a blazing 10:38 and CRUDer Shannon M putting on a 3rd place 50 mile debut! 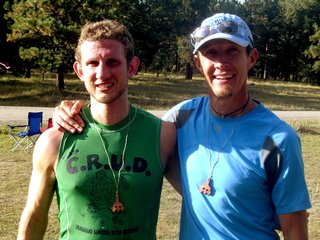 All in all it was a phenomenal race and every bit as difficulty as advertised, even if the elevation profile isn't as intimidating on the surface as some of the other big name races. The fall colors were absolutely amazing and the intimate, community vibe of a smaller race was refreshing. And, to top it all off, a bonfire at night, pancake breakfast the next morning, and a soak in the hot springs before leaving town! What could be better than runnin' with the Devil?

Comment by Brandon Stapanowich on October 5, 2011 at 6:09am
Thanks Nicole and Tim!

Comment by Nicole Odell on October 4, 2011 at 3:34pm
Congrats!!! And thanks again for another entertaining race report!

Three cheers for Devil Mountain 50 champion, Brandon Stapanowich! And congrats to the the CRUD runners!

This line is great: "I was a deer just waiting for the hungry mountain lion behind me to pounce...except it never happened."