But what if bonking isn't only impacted by what happens race day.  Building muscular and cardiovascular endurance requires months and years of training after all. Why then neglect the intricate metabolic processes that allow our bodies to go through such rigorous demands. Conventional wisdom says to always adequately fuel in racing and training. And while I agree with the racing component, perhaps the training principle should be re-examined. Perhaps always training "adequately fueled" for ultra runners is like training solely with long runs. Race specific? Sure. But speed work, hill repeats, and tempo runs can improve running efficiency and have training adaptation merit as well.

So what if this principle of variability was carried over to nutrition? What if a bonk run was intentionally incorporated every now and then? Not for the purpose of merely bonking of course, but perhaps to improve muscle adaptations so that an average effort could become exceptional on race day. This concept is not new and it has been discussed already in the blogosphere. But if there really is a performance benefit to such training runs, and if we can become more efficient with glucose utilization, then it may also solve some stomach issues for ultrarunners. If a "nutritionally trained" runner can do on 1 gel (or Justin's Peanut Butter) what a "nutritionally untrained" runner can do on 4, it almost goes without saying that the former will have less gastrointestinal distress after 15 hours of racing. Plus, if nothing else, it means less stuff to carry, and I'm all for that.

Such was the premise of June's trip up Pikes. Fueled on breakfast of a banana and a smattering of gourmet nut butters, Charlie and I headed to Pikes via the Crags TH. The plan was to cover the 12.5 miles and 4200 ft of elevation with as little calories as necessary. By nature, the route demands a lot of power hiking which made it a good day to test this calorie deficit concept. Armed with a camera, a handheld, and some emergency fuel (just in case), we were off. 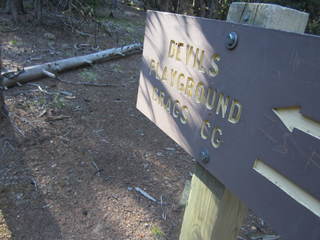 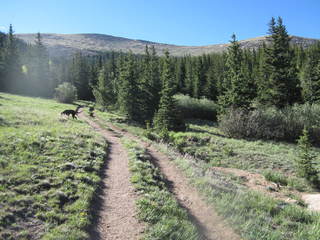 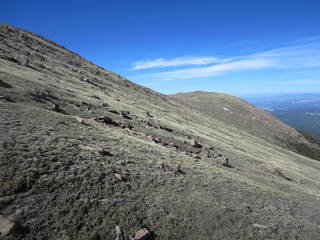 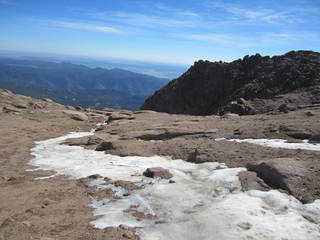 The two of us made the summit in around 2 hours. And after snagging another quick pic at the top, we began the descent as the crazy winds had made me all too aware of my tendency to under-dress for such adventures. Soon we were back to the car and had somehow managed the 3.5 hour trip with just one water bottle between us. As my friend Reese, who is also a student of the bonk run says, "the calorie deficit was at an all-time high!" 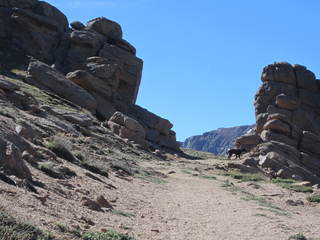 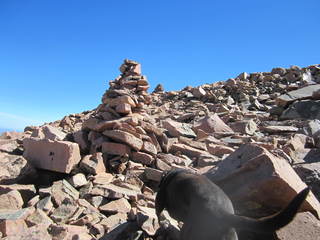 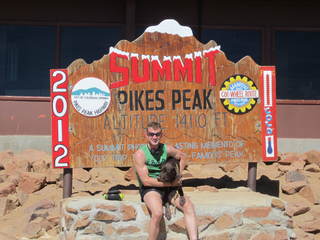 While certainly not a PR kind of day, I never really felt like I hit the wall. In fact, while the eased intensity on the downhill and a return of oxygen surely played some role, I felt my best during the last hour of the run. Euphoric almost. As if in this calorie depleted state, my body was throwing and anandamide party. Now if you buy into the whole "humans were meant to run" viewpoint, then perhaps it does make sense that a feeling of bliss would reinforce a lengthy, calorie deficient hunt for survival. And I'm betting I wasn't the only one enjoying this high. As dogs are fellow cursorial creatures, my guess is that Charlie was feeling pretty fantastic as well.

What I love about this sport is that we're all our own coaches. Everyone has their opinions and superstitions. From training plans to footwear, gear to nutrition, it's just a huge experiment really. And with tons of studies out there, it's easy to get lost in the numbers and minute details, but that's no fun for me. I don't really care if there's a statistically significant difference or if it's just attributed to placebo. If you think it works and it feels good, go with it.