*You have to understand that I had to do it. That I had no choice. Of course it was risky, foolish even. I knew the stakes involved and that I could have been seriously injured or worse. But after laying on the couch for one too many days in a row, just staring at the door and waiting for something to happen, I was growing bored. In this boredom, I jumped on the anxiety bus and rode it all the way to maddening desperation. I couldn't take it anymore. Now, to this day, I'm not proud of what I did and I hope to never have to do it again. But after some time I'm ready to fess up. I can tell you that yes, it was me that ate the bottle of honey. The whole damn thing.

In my six and a half years, you could say that I've become an expert watcher. All my life has been dedicated to staring at my human. Staring at him while he eats, staring at him while he sleeps, staring at him while he goes to the bathroom. I stare at him as he leaves and I continue to stare at the door until he returns. After years of observation I've deciphered the meaning of all of his body language and many of his words. I can read when he's happy and I can read when he's sad. Most of all, I know his boring day to day routines, which are only important insomuch as they are the background noise for deviations. And within those deviations, therein lies adventure.

So yes, back to the honey. It was brash and impulsive and I still don't understand how my stomach processed all of that sugar. But somehow I put away all 16 ounces of the golden goodness in less than 5 minutes. I didn't even leave any sticky residuals. Impressive as it may be, this was only the first step of my  brilliant plan for a peaceful protest. After all, I think that if anything, the human was more amazed than upset with my feat. I knew all along that in order to really send a message and to break the banality of his routine, there would have to be an encore performance. And so the next week I did it again. Except this time, I devoured the entire stick of Body Glide plus half of the plastic container. Of course, I felt incredibly sick. And yes, I really wish that there was some other way. I really do. But as they say, with great risk comes greater reward. With patience and perseverance, I knew that my gamble would pay off. 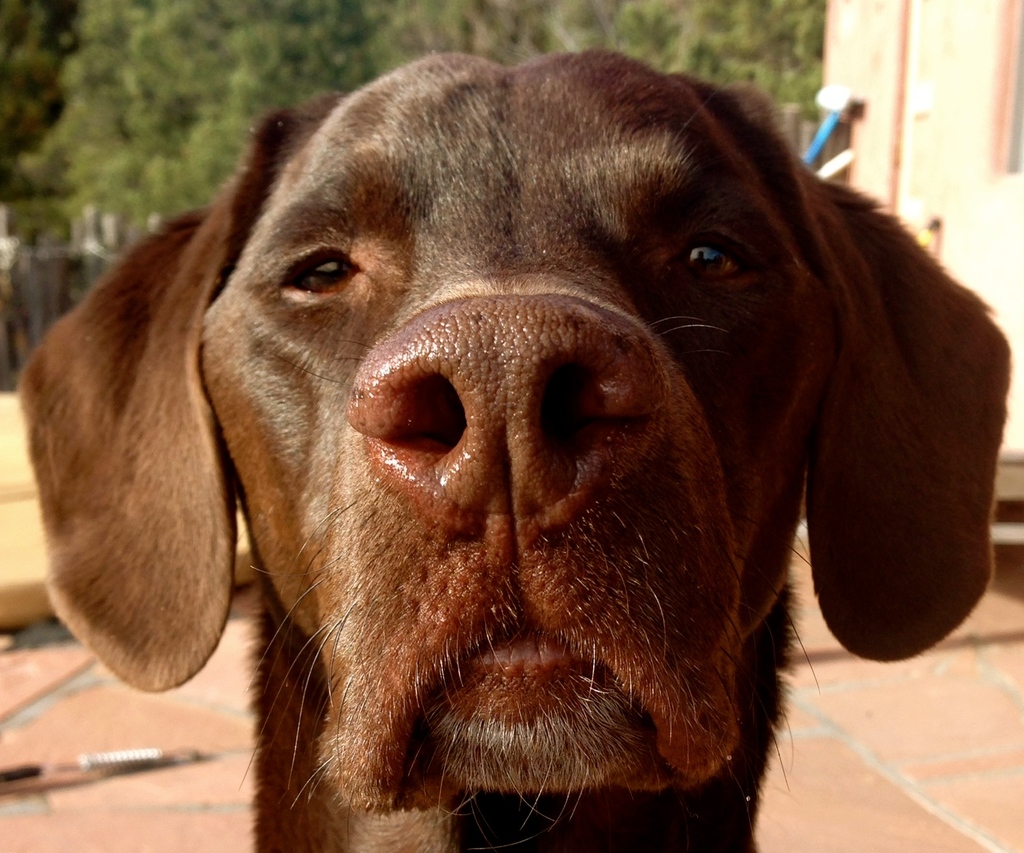 The author and watcher extraordinaire, staring. (Photo: the human)

Days after the final sacrificial feasting, I noticed the human gathering some bags. Only, something was peculiar. These weren't the typical workaday bags. No, these were different. They had the scent of dirt and adventure. Could this be a deviation from the routine? Was my civil disobedience finally going to be rewarded?

As he fumbled and bustled about, I sensed some anxiety in the human. Though only slightly similar to my boredom-born anxiety, the nuances of his nerves were of a different quality.  "I don't know where we're going and I don't have a plan. We're just going somewhere," he muttered.  I suppose that my human, like most humans, likes to feel as if he has total control over most situations. As a domesticated dog though, all of my days come unscripted, or at least scripted by another. So try as I might, I just couldn't relate to his brand of trepidation towards spontaneity. Welcome to my doghouse, human.

As he continued his work gathering items in a frenzy, I began to take notice of the things he collected.  Among them, I spotted my leash, a bucket of my food, and my traveling bowl. Now circumstantial evidence up until then had led me to have a pretty good feeling about things. But when the human asked, "You want to go for a ride?," I absolutely lost it. With suspicions confirmed, I exuberantly answered with a jump at the door. Ok, not just one jump. Not even just twice. Nine times in fact, each exceeding six feet straight up in the air because I know I'm not supposed to scratch anything. Though I could've done it myself, when the human finally opened the door, I bolted for the car. I hopped into the front passenger seat, my seat, to help sniff out where we were going. For the first 20 minutes of the ride, I circled and whined in a crazy, manic, spiraling vortex until I realized that this time, we were not going to be going to the dog park. Only upon becoming absolutely certain that like my human, I too didn't know where we were going, I settled down and was a good boy.

Hours later we finally stopped for the night and the human let me out to pee.  We were in a strange place and the ground here smelled dry and foreign. Under the moonlight, the human set up a small house made of flimsy walls. He beckoned me in, assuring me that "It's OK," but I was incredulous. With walls that ruffled in the wind, I scoffed at the idea. I thought, "Ain't no way we're both sleeping in that thing." But the human insisted, and since he feeds me, I obliged. 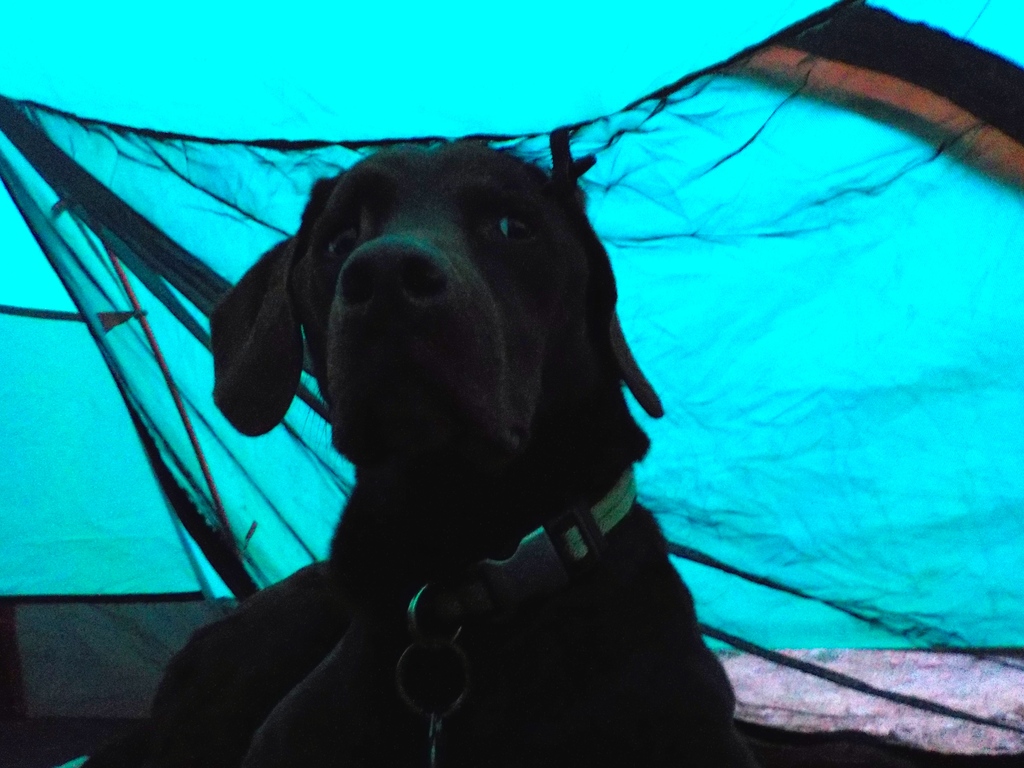 I'm NOT sleeping in here. Photo: the human 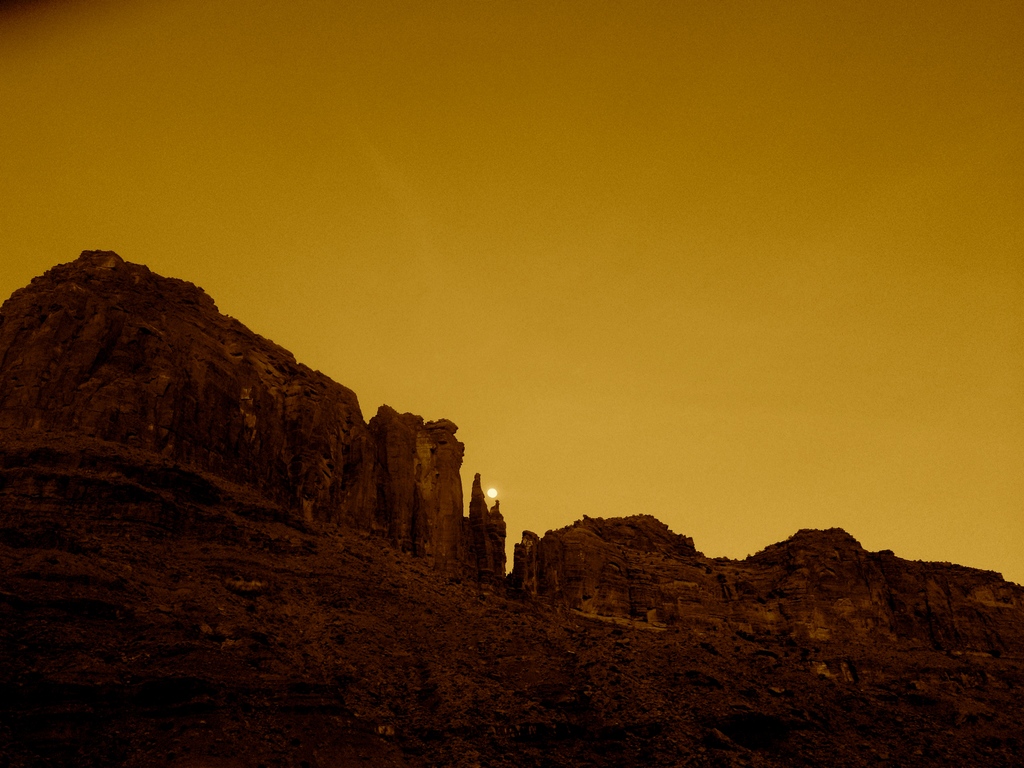 Kind of makes you want to howl! Photo: the human 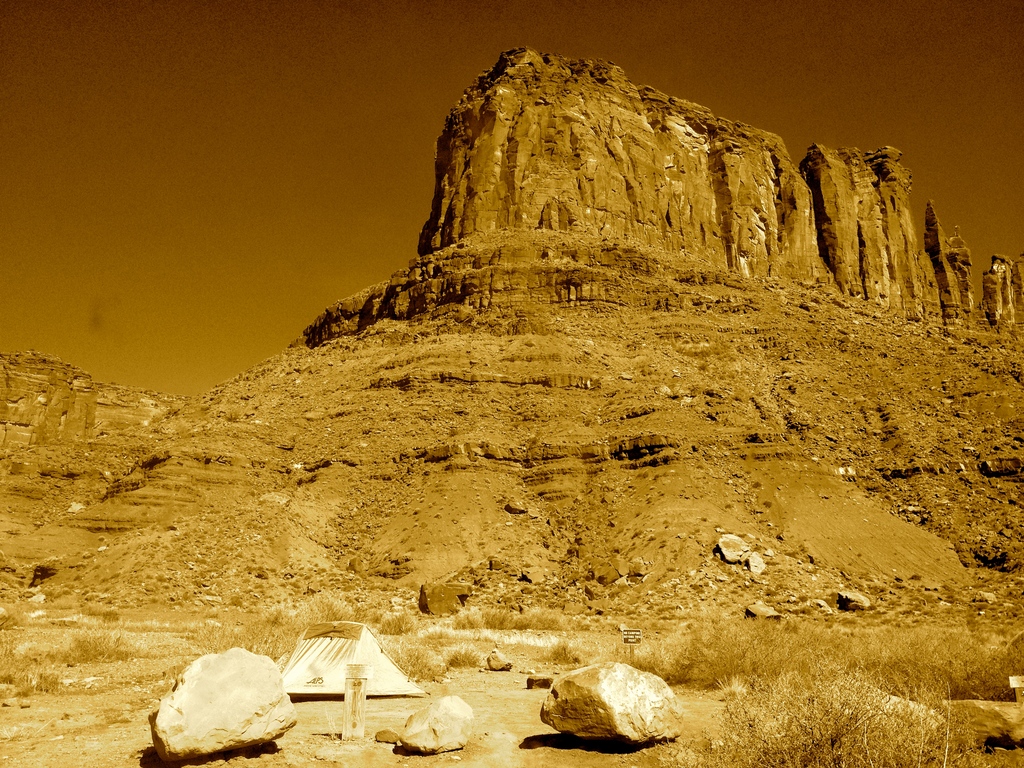 The flimsy house. Photo: the human

The next morning we rose with the sun and after a quick breakfast, ventured away from the roads and most of the people. At times we moved swiftly, while others, we meandered or even stopped to sit in the shade. Sometimes I followed the human, other times he followed me. 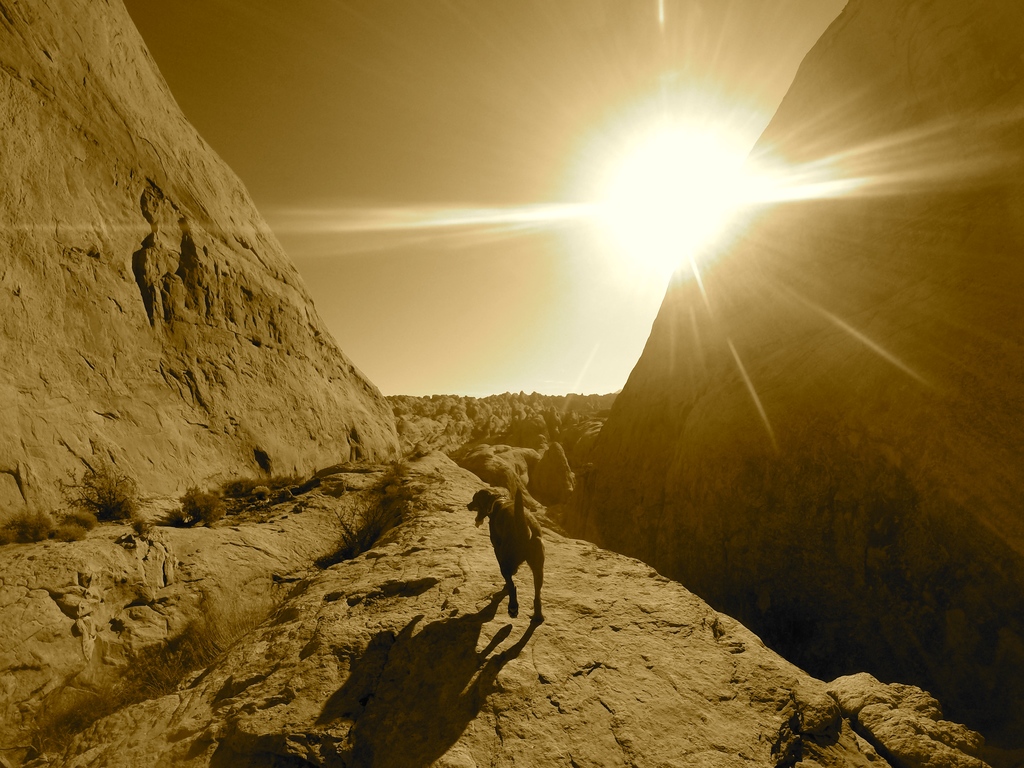 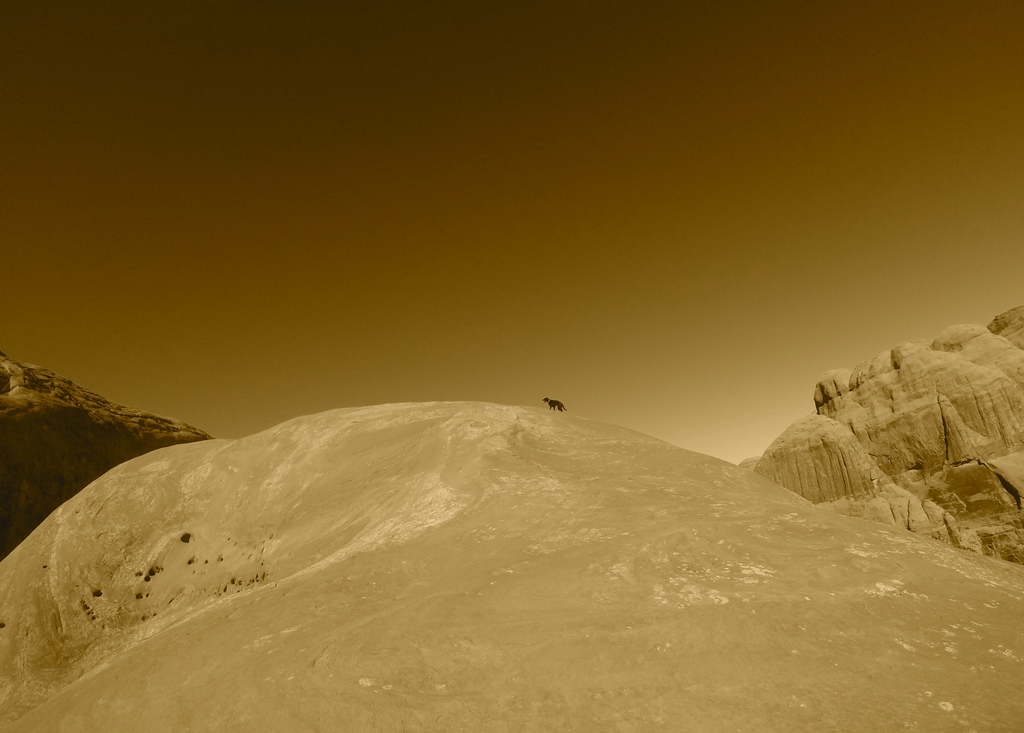 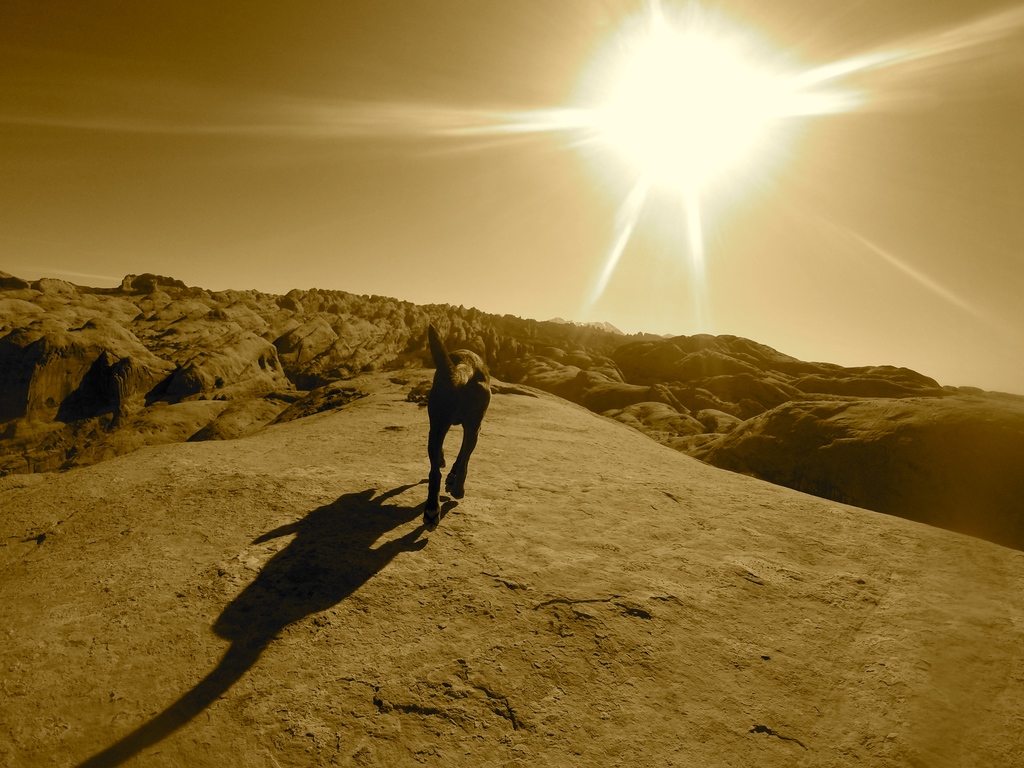 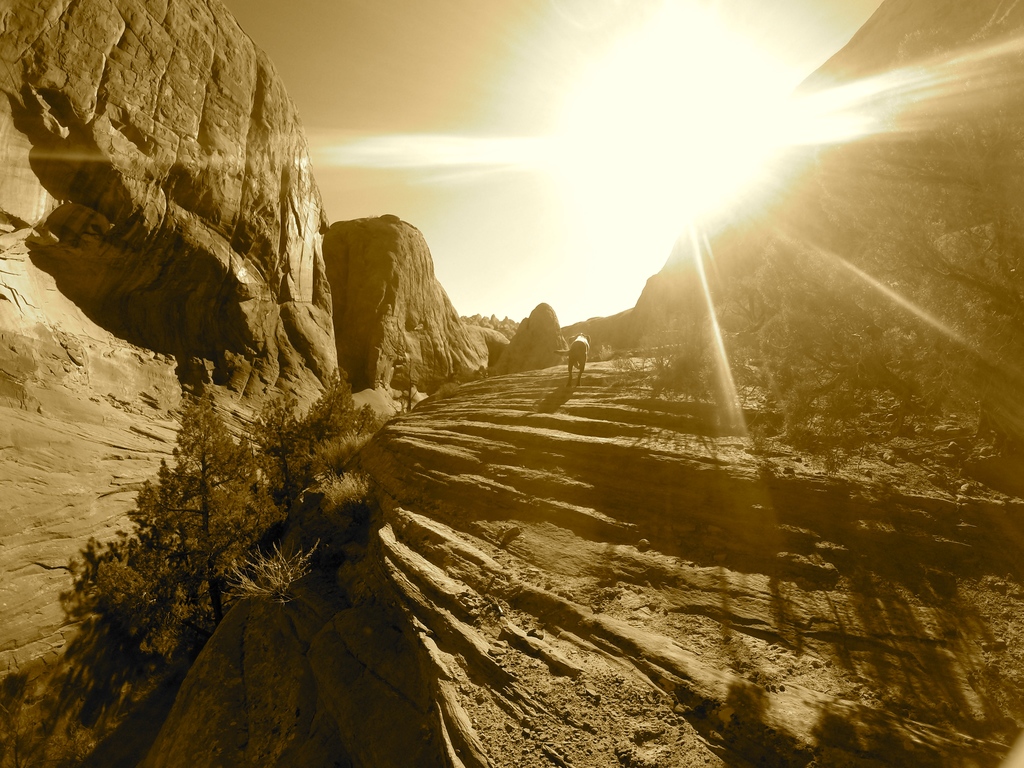 Above photos: the human

It's difficult to describe, but when I move like this, without a defined destination or any real purpose, outside of the actual moving, I feel free. I don't know the meaning of life, but as I grin from ear to ear with my tongue hanging out of my mouth, I know that I'm doing what I'm supposed to be doing. Wandering, wondering, living. My trotting exudes happiness in its purest form. My joy is embodied by my movement.  Out here, if I catch a scent of something, I am free to follow it. Maybe it leads me to another trail to follow, or an actual animal to chase, or perhaps, if I'm really lucky, some poop to eat. Out here, I'm not confined to leashes or deadlines. Out here I don't run because I have to. I run because I get to.

We spent several days like this, just living simply. Days spent moving, eating, and sleeping. Days spent climbing in and out of the folds of undulating slick rock crevasses. Days spent searching for and splashing in hard to find creeks.  Days spent embracing the sunshine and climbing up trails to the canyon rims to breathe in the warmth. This became our new routine. But rather than those stuffy, claustrophobic habits of old, I wasn't stuck sitting on the couch, staring at the door and waiting for it to open. I was opening the door and going outside.

Eventually, this desert escape ended and we returned home. Over the years, my human and I have had a lot of adventures like these. And after each one of them, it's my greatest hope that my human learns something. That he will come to know what I know. After all, he was there to experience it with me and I saw his happy face and I felt his peaceful mood.  My human is always telling me that a tired dog is a good dog. Well, I think it works the same for him. Sure, I guess there are other important human responsibilities, things that I'm sure I wouldn't understand. But I believe that a balance can be struck. There's real growth that comes from breaking the routine, from continuing to find the time to wander and the courage to wonder. But I'm a dog so what do I know? I guess if he doesn't get the message, I can always eat his socks. 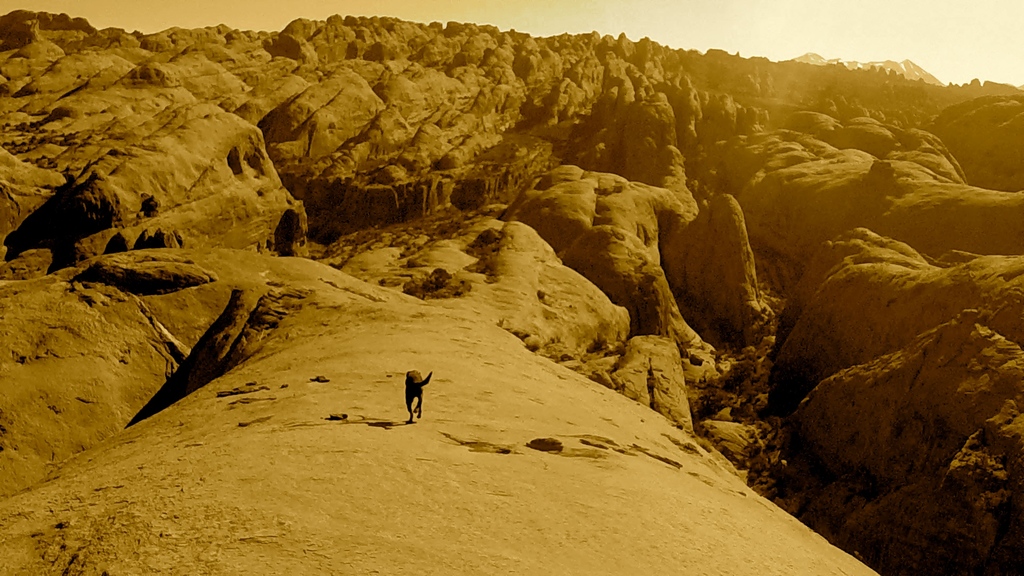 *Sentiments from the wise Charlie Brown, a Craigslist, chocolate labrador retriever with more than a few gray hairs on his chin. Photos were taken during a 3 day trip to Moab exploring the Kane Creek Blvd trails, Porcupine Rim, and the "Magnificent 7" trail. If you're looking for a great racing experience in Moab to discover more about the area, check out Behind the Rocks on April 2nd, a great event which offers a 50 mile, 50k, and 30k option. Charlie and I will be there.