The American Discovery Trail Races (http://www.adtmarathon.com Labor Day 04 September 2017) depends on volunteers to offer excellent support to participants. There are a wide variety of volunteer opportunities available the weekend of the races.  Please contact the volunteer coordinator at RunADTMarathon@yahoo.com AND be sure to sign up here at (…

Seriously, I always liken PPA/PPM weekend in Colorado Springs to what the Boston Marathon weekend must feel like in Boston. Obviously this…
Continue

It was so exciting to go to Memorial Park and pick up Bibs and get the coveted running bracelets. The Pikes Peak merchandise this year was excellent and extremely popular. I waited in line for one hour to purchase all of our goodies for the year.  I met some interesting people while waiting in line. My husband enjoyed the beer garden. After we left the Run Fest, we headed over to Ritz Grill for one last call before closing the doors over the weekend. The anticipation was…

I DID IT! And now you get to hear what I think about while I run!

I am still super excited that I complete the Pikes Peak Marathon, yesterday! I can honestly say, even up to the point where I was toeing the line, I doubted whether or not I could do it. I kept telling myself, "Just be SMART!!"

I listened to myself and started out with an easy run up Ruxton and onto Barr Trail. I would walk when it got a bit too rocky or a bit too steep. There were several times that I felt a twinge in my right foot/ankle and it would make me a bit nervous. Throughout… 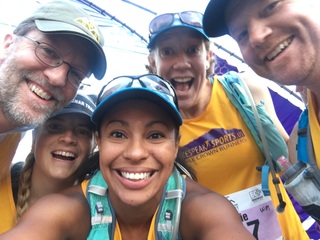 And now, the end is near

And so I face the final curtain

My friend, I'll say it clear

I'll state my case, of which I'm certain

No turning back now!

Well...about 13 hours before I start the 62nd running of the Pikes Peak Marathon.

I am nervous due to battling injury for about 5 months, but excited to run a race that has been on my bucket list, since high school. My mom recently reminded me about the time we volunteered at the top, for the Ascent, because my high school coach would not let me run the race.

Now is my chance! I… 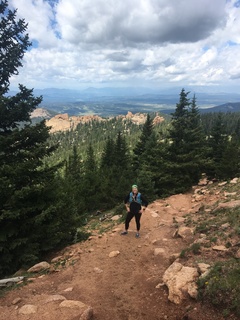 My nerves are getting to me today. The Pikes Peak Marathon looms large, and although it's something I've done before, it's a rather big something to be doing on a summer Sunday.

My son is 11 months old today. I knew in March that signing up for this marathon was a big reach, especially as I recovered from a c-section. But I used it as fuel. It was my motivator through…

The Rockies, Chad Bettis, and my return to the Ascent

Anyone who knows me well, knows I am a big Rockies fan. I can recall being in 5th grade and hearing that Colorado was getting a baseball team. I remember there was voting for the mascot, I remember hoping they went with Colorado rather than Denver (I mean, the whole state will be cheering, not just Denver), and I remember how cool I thought it was that their initials were the same as mine :)

Through the years, how seriously I follow the Rockies has gone up and down. I lived…

Running has taken over my life to say the least.  If you have been following my story you will know that I have lost  34 pounds and can run 15 miles on…

I felt my nerves during my drive to participate in the Woodland Park Mayor's Cup, yesterday. Driving towards the west, seeing Pikes Peak in front of me, flooded me with many emotions. Some of those emotions were excitement and others were of doubt and regret.

It has been a lifelong goal…

The Pikes Peak Ascent and Marathon is this weekend.  Volunteers receive JQRC Run Credits for each day.  Sign up at BOTH websites and we’ll see you on America’s Mountain!… 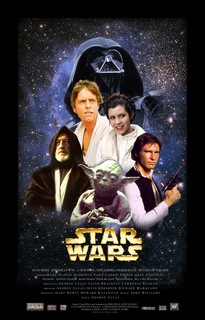 We have about 9 days left until the Ascent.  It feels like I have been on this journey to get to the top of the mountain for a really long time. I remember when I got notified that I had been chosen to be a Marmot. I was SO EXCITED! I did a giant happy dance, and I immediately felt really cool, like I had arrived somewhere; like I was finally something. It's silly, it really…

The past few weeks have been crazy busy for me. Among other things, this has meant that my longer runs/hikes have not been on the weekend and/or not been in Colorado Springs. So I have had to go solo. While I am quite the independent person who does not like to ask for help, I am somehow not very good at going solo.

My last post (from forever ago) was about the importance of running friends and community. I really don't think I would be in the shape I am if it were not for…

So in the interest of not dying during the Pikes Peak Marathon coming up in less than two weeks (um, yikes), I decided to put my minimal summer training to the test the past two weekends in a race setting.

The original plan was to spend July 29-30 at Barr Camp with my husband and the baby. We'd backpack up Saturday morning, spend the night in our tent, I'd wake up at some ungodly hour on Sunday to summit, and then we'd pack everything up and head down. Sounded like a grand adventure,…

I put together a YouTube video of my run/hike to the top of Pikes Peak.  Enjoy!

This past weekend I completed that first unofficial attack pack double in 14 hours and 12 minutes.  I say unofficial because it is something I made up in my mind while on a Tuesday morning run with the attack pack.  The midnight pony (15 mile run around Rampart Reservoir at night) was coming up and Ramsey said that before hitting the trail he would of already biked a bunch of miles and swam as well.  He knew he was going to be tired but was still going to do the run.  I then said I was…

I woke up this morning, made my coffee, sat in my favorite chair and noticed how much I am enjoying this beautiful Fall day... Wait a minute! It's only 7 August! I am not complaining by any means. I love the cooler weather. One thing that I have learned this year is that I am much more comfortable running and being outside when its a lovely 50-60 degrees versus 90 or higher. I remember running the shadow races (a race that you do in the Middle East while the real race is going on in the US)…