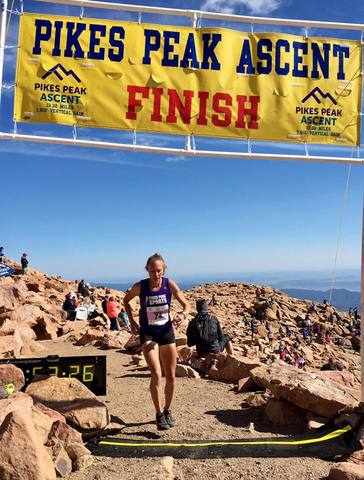 Afterward, while I was laying in the parking lot (yes I did) in Glen Cove down below with my friend and PPA veteran extraordinaire Simon Gutierrez, waiting for the ride the remainder of the way down and likely appearing strung out on those cool shrooms growing up by Barr Camp (what was really in the Gatorade at that aid station?), I picked apart some stuff. Rather than post-race in 2014 when admittedly my thoughts at this point were, "Eh, I'm probably not doing that again," this time I was devising ways to do it again and better.
I wasn't disappointed so much, I mean, sometimes there isn't a whole lot else you can do, but I was still looking for errors. Maybe I didn't spend enough training time on really steep stuff? Maybe I didn't do enough long runs? Maybe I should've eaten more gosh darn bananas that week (or, in the words of Gwen Stefani, B! A-N-A-N-A-S!)? Maybe it really was as everybody said: the barometric pressure! The impending eclipse! The planetary alignment! No, seriously I think maybe I had some training oopsies and/or shouldn't just tank up on water for two days preceding the race. But who knows? It'd be cool if every race was a guaranteed great one, but that would eliminate half the battle, and that's no fun. Also, the good thing about running like a donkey is that you recover pretty fast.
So, like I said, Pikes is tough and throws curveballs and keeps you on your toes and that's why we all love her. Although I seem to vaguely recall a friend asking me at the finish if I needed anything, to which I replied, "Yes. My soul. I think I lost it down at A-Frame." Before that interaction, the first words out of my mouth to Tim B. after crossing the line were, "This mountain is a real son of a b****." No but seriously, we really do love her in some twisted, maniacal way. Why else would we keep coming back?
So, maybe it wasn't the day that I wanted. Truthfully, I really believed I could win the thing and went in with that intention, knowing it was anybody's race. But you can only do what you can do and that's just how it goes and you roll with the punches and be grateful for what went right and learn from what went wrong, and plenty of things have gone right. On top of that and maybe more importantly, having spent this season following numerous peoples' "Pikes Peak Quests" if you will, I realize that my bad day would be many peoples' best day. And I don't mean that in a bragging sense, so let me explain. Running well takes a great deal of hard training, but it also takes a great deal of luck, opportunity, God-given talent, and, let's be real, genetics. I don't consider myself to be an "elite" in this sport, but I still know how fortunate I am to consider my day to be sub-par, because somebody else would be completely over the moon for it. I know so many folks who were happy just to finish, and I see their excitement and gratitude at accomplishing it,  so I'm just gonna be amped that I'm healthy and running and thankful for another Pikes in the books. It was as amazing of an experience as it always is, podium or not.
Still, me and Pikes have some unfinished business now, so I guess I'll have to have another crack next year.
Keep fightin' the fight folks, it's all you can ever do. Always better days ahead.