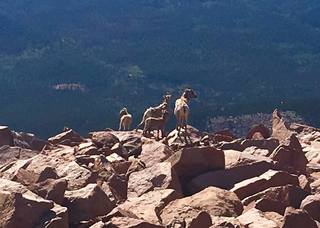 I remember my first trip up to train on the summit of Pikes back in the summer of 2014 one morning shortly after Mt. Washington, and glancing up to see my first bighorn sheep up close as I was picking my way across the Cog Railroad tracks up top to descend on to the trail below. On my first trip up there this year, there wasn’t just one sheep, but a whole herd, complete with baby bighorn sheep (bighorn lambs?). If I believed in omens, which I don’t, I would hope that would be a sign of bighorn sheep caliber mountain running prowess to come. Regardless, every trip up The Peak is always an adventure. And yeah I know, there are 53 such "peaks" in Colorado, but this is OUR peak, and therefore THE Peak.

This season hasn’t seen quite the number of trips up Pikes as my last go-around training for this thing. Work obligations have often whisked me away to other areas. But hey, can’t run up Pikes Peak? There’s always Aspen Mountain, Vail Mountain, or even Sandia Peak in the event one finds oneself in New Mexico, and others. There are a lot of mountains out there, so it’s easy to improvise wherever I find myself. Although the slightly more obsessive side of myself was initially annoyed at the fact that I might not know every inch of the course this year, I’ve found lots of solace in the fact that last time I raced this, the two ladies who trounced me (hi, Allie and Morgan!) spent minimal to no time up there. And having only raced it once, I've been told by numerous veterans that they in fact raced better the years they didn't spend as much time training on the mountain.

But I figure I should make the most of the time that I do get to spend up there. I did a slew of workouts up there training for this last time, at least two a week for the couple of months leading up to the race, but I really don’t recall what all they were or what times I was shooting for or ended up running or what, so...blank slate to work with here. All I really remember is that I was a hurting unit starting at about 12,000 feet during the race.

I'm certainly no exercise physiologist, and I "coach" myself, for better or for worse. In an effort to avoid overthinking, I decided that I should just do a bunch of hard things at that elevation and above and see how it works out. I mean, at the end of the day that's the name of the game right? Run hard uphill up high. I think I can already run uphill, but can I run uphill when there is no air in the air? I struggle. But don’t we all. So that might be an area worth investing time into. 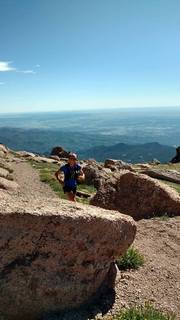 So there’s been a lot of things along the lines of: start at summit, warm up running down to A-Frame (during which time I acquire even more respect for those brave souls willing to tackle the Marathon. Running downhill is hard.), run hard back up to the summit, go back down to A-Frame, run hard from 3 to go to 2 to go, recover for 3 minutes or so, then 2 to go to 1 to go, recover again, and finally 1 to go to the finish. Or my other favorite: start at summit, run the 6 miles down to Barr Camp, tempo run the 3 miles back up to A-Frame, recover for a few minutes, then do second half of the previously mentioned workout to the finish. Whatever. Just run uphill hard at the elevations you struggle the most.

The same thought always crosses my mind up there:

Another thing sort of messing with my head (let’s face it, is anything ever going to not mess with my head?!) is the overall less volume of mileage run this time around in comparison to a couple years ago. Don’t get me wrong, there are still plenty of miles going into the bank, but in spending the last several months reassessing how to train a bit better without always winding up perpetually banged up, sometimes you have to think up other ways to skin the cat. In this case, running just enough miles--no "fluff" miles and no running for running's sake just because I can't control myself--and then spending several additional hours a week cross training pretty hard. I have no idea how this will translate, or even if it will, and talk is certainly cheap, but regardless, I feel darn good. But maybe too good. And what if I shouldn't feel good? Oh crap. We’ll see. We are each an experiment of one I suppose.

Anyway, however much I love being on the mountain, my old friends the Sixteen Golden Stairs are as annoying as ever. Yes, scrambling over a pile of boulders a couple hundred meters from the finish sort of cramps my style (that’s really just a nice way of saying, “Help. I’m really uncoordinated and fall on things a lot.”), and I know on race day it will be even more of a booger given the added state of hypoxia combined with the 13 uphill miles that will already be in the legs by that point. I can always think of numerous adjectives to describe said stairs, none of which would be “golden.” Also, I still think the name is misleading and it’s a bit of a mystery to me as to how it acquired such a namesake. I believe one of the following would be more accurate:

I jest. I’m not really a big whiner. At least I try not to be. It just wouldn’t be our beloved Ascent without looking up to see the finish line (or in the Marathoners' case, the turnaround) after conquering those delightful Golden Stairs.

Yes folks, ‘tis the season! I have certainly enjoyed following everybody's training/adventure updates and crossing paths with lots of folks galloping up and down Barr Trail.

May the marmots keep on chirping and the bighorns keep on grazing. T-Minus-Less-Than-A-Month and it’s go time. I’m excited.