Coming to a close

At least for the 2015 season, the Ascent Cycling Series is wrapping up. One more race at Palmer Park. One more chance to ride with one way traffic as hard as we can on local trails. It's been a long series, with all kinds of conditions thrown at us - sunshine and heat to mud and creek crossings. What will the race bring? It's impossible to guess until we are on the line, sizing up the competition and ourselves. Are we ready for this finale? Will both the bike and the legs hold on until the…

Hard to believe it’s almost the end of July….where has your summer taken you???

In a little over two weeks the 60th Pikes Peak…

Interested in helping your fellow runners accomplish their dream of conquering Pikes Peak? Volunteer with the JQRC team for the Pikes Peak Ascent and/or Marathon. We need volunteers to work various roles including water stops on the mountain Aug 15 and 16. Volunteers receive 2 JQRC runs per day volunteered. Email Adam at president@jackquinnsrunners.com to sign up.

A couple of Great Summer Races 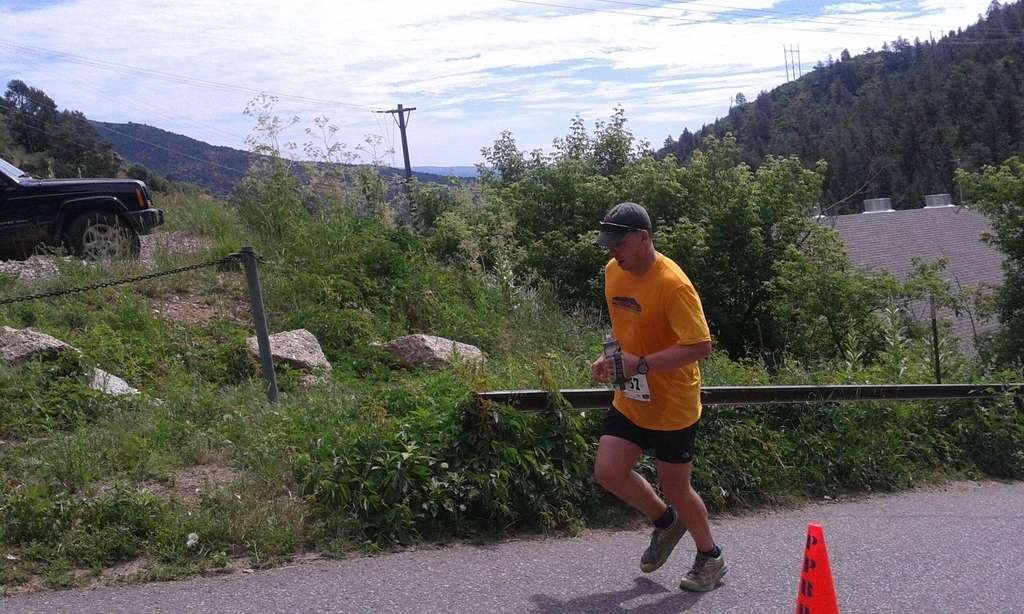 Alright, let's backup a bit. The Summer Roundup was awesome. I am a huge fan of running. I watch it on TV, follow it on websites, and try to follow our local runners as they tear it up in Ultras. What does this have to do with the Summer Roundup? I got to watch the lead runners as they screamed past me on the second lap! My race not withstanding,…

I'll be honest - I didn't know what to expect with the long race at CMSP on Sunday. The last time Nick and I tried riding Blackmere and Cougar's Shadow, they were a mess. It was more of a swamp then a trail, with several stream and creek crossing and mud bogs that were 100s of feet long and ankle deep. Not ridable at all. We've had some dry and hot days since then, but not enough to even dry up some of the new rivers running through CMSP. Given that I wasn't sure what was coming, I'd… 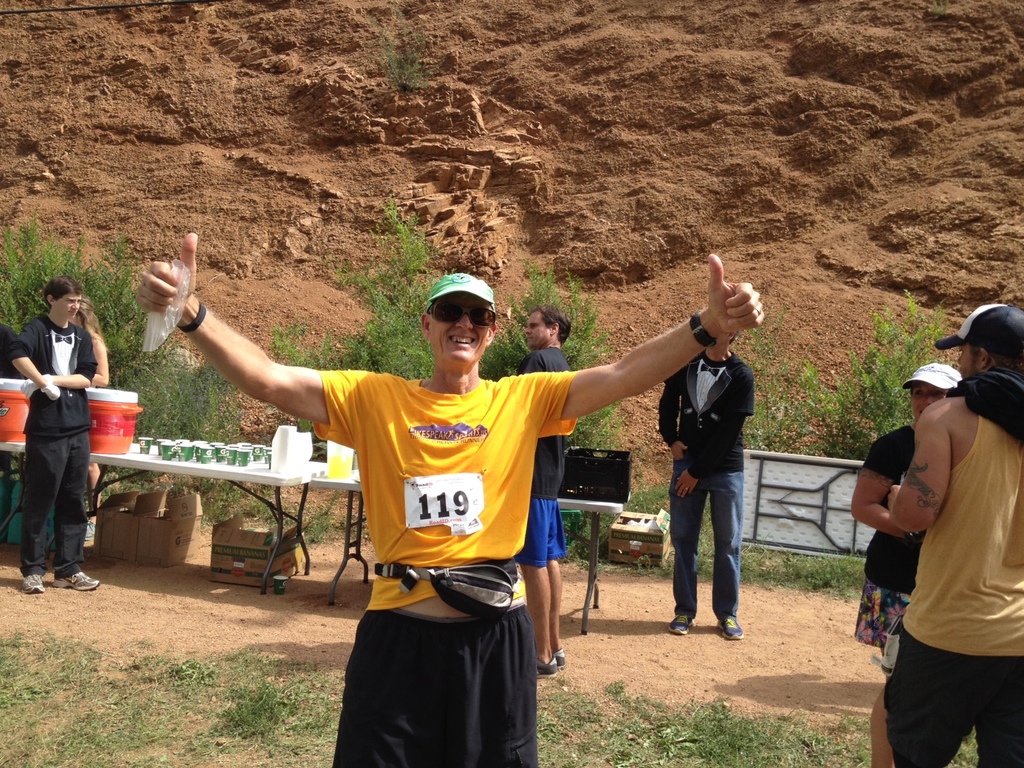 I ran the Barr Trail Mountain Race last weekend and had a great time, but it didn’t start out that way. The race was late getting started and that always throws off my timing, but fortunately it was no big deal.

I headed up the mountain, running and walking. If I come up on someone and it is possible, I pass.…

Lots of events over the weekend to include the Classic 10K and the Barr Trail race.

"That's one gnarly course, but the pierogies were delicious!" Those words were for Dale Garland, race director and greeter of every single Hardrock 100 finisher making the journey back to Silverton. Apparently, after kissing the painted slab of mining stone and effectively stopping my race time, I thought Dale needed to hear not only that his race called Hardrock was indeed "hard" but that the starchy sustenance was pleasing. Don't…

It’s a beauty to which the extent you can’t describe, a beauty you have to simply experience for yourself. It’s a beauty and inspiration that can only…

Every morning we wake up with the choice - make the best of the day we are given or simply go through the motions of living. And that is just the first choice of the day - there are a million more and sometimes we don't even realize what choice we are making and how they will affect the rest of the day, week, month...  It's not easy to see how much a little choice will reflect when we act in the moment. I've been trying to wake up and choose positivity. After all, I'm waking up to a new day…

Round and Round We Go!

In my last post I ranted endlessly about how much I thought I was going to dislike the loops in the Summer Round Up 12k...turns out they weren't that bad. It was actually a pretty fast course in general.

However, this was a fairly crappy race for me for other reasons. My lower back was killing me! Like "sweet baby jee...mother of Mary" killing me! I stupidly did some heavy weighted lunges a few days prior…

I hope you had a great Pikes Peak or Bust Rodeo week!

This week at Jack Quinn's:…

Won't you ever learn?

The Summer Roundup Trail Run is in the books. The course was different then anything I’ve done before. I can’t remember ever repeating a loop, except on the track. I went out feeling great, and really pushed the first lap and unfortunately, I pushed too hard. I just felt like running fast, something that…

Roundup of a Roundup. Summer Roundup 12k. A race report 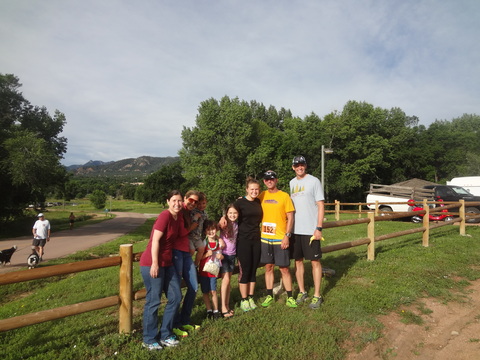 My biggest takeaway from today's Summer Roundup 12k....my cheering section rocks!!!!! My entire family was out there along with friends and it helped me to execute a very solid race. My cheerleaders are the primary reason for it so thank you all!!

This was the 2nd leg of the Triple Crown of Running. It's the shortest of the 3 races but not easy by any stretch of…

Turkeys and rabbits and mud - oh my!

I have to wonder, what the large flock of turkeys was thinking Wednesday night. After all, it was wet out and still spitting rain at times. What on earth were these mountain bikers doing? Usually the trails would have been deserted at that time of day under those conditions. It would have been safe for them to take the easy route - aka the trail - to their destination.

But this was no ordinary Wednesday night.…

We've all heard stories of athletes being "in the zone." It's that mystical place where things become effortless and you can do no wrong. You may have even experienced glimpses of this yourself. Time seemingly slows, your performance elevates inexplicably to a level of mastery that was previously inaccessible. It's in this state that you discover untapped potential, yet you're not sure how you got there or when it will fade. And like those elusive autostereograms, once you think too…

On grey days like yesterday it's hard to want to get out and ride. It's cold. It's raining... The list of excuses goes on and on and eventfully the ride doesn't happen. Or we wait for the dry and sunny window, only to have that window never open. Again, the ride doesn't happen because of the lack of motivation to take a chance with the conditions. But what are we missing when we choose to let the weather win and allow the grey, heavy clouds to affect the motivation needed to hit the trails?…

Buckle up and let 'er buck it's the start of Pikes Peak Rodeo week and the parade in downtown Colorado Springs at 6:30pm.

JQRC runners we need you… 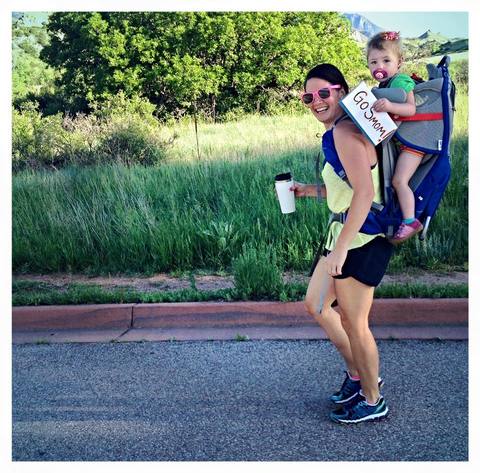 Something happened at the Garden of the God 10 Mile for me. It was as though I burst through the delusion that I wasn't, nor ever would be, a "RUNNER."

Not being a runner was fine. I was okay with that. I actually preferred it that way because it allowed me to not expect too much from myself. "I'm not…

Race week and training through it. Summer Roundup 12K

It's Summer Roundup week. To me, this 2nd leg of the Triple Crown of Running is the hardest of the three races. It's the shortest but I feel packs the biggest punch. As daunting as the Pikes Peak Ascent is, it's done at a lower intensity level. At my age, the longer stuff that has more aerobic running is much more in my wheelhouse. The Summer Roundup is just hard the whole way. High heart rate, punchy climbs on loose footing and congestion makes this a personal sufferfest. The course has…