I promised fireworks, hard racing and excitement at the final Ascent Cycling Series. I wrote that on grey, dreary day with thunder rumbling in the background, feeling hopeful that we would be racing. After all, it was supposed to be sunny with a 50% chance of showers for Race day, and the ground needed all the moisture the clouds were currently dumping. We'd be racing. It might be a little muddy a little damp, but we would be racing.

Well... For the first time that I can remember,… Continue

Getting ready for the Wild, Wild West

The countdown is on for the Wild West Relay which runs from Ft. Collins to Steamboat Springs starting at the butt-crack of dawn (actually, before that) tomorrow. I'm proud to be running with the Schriever Striders which is coordinated by the one and only Pikes Peak Sports Triple Crown of Running alum, Vanessa Shawver. I'm so grateful to have the opportunity to run with this fun group. The total mileage for my 3 legs is around 20 miles but I may jump in on some other legs to get a 50k in…

Unlike sharks, runners can stand still...or so we're told.

I've dealt with the past week and a half of this whole "not-running-on-an-injury" thing pretty well.  Now, my resolve is wearing thin.  I know, I know, runners are not like sharks - we don't die if we stop moving.  That may be true in the most literal sense, but the similarities ends there.  There is a emotional and social death that occurs when a runner is not running for more than a few consecutive days.  Dramatic? Yes, but hear me out.  When you run, you have lots of friends who run.…

Let there be fireworks

Are we saying goodbye to the Ascent Cycling Series for the year or forever tomorrow night? Who knows at this point - but regardless, it's the finale of the 2014 racing. Race Number 5 for the 2014 Ascent Cycling Series and lucky 101 for Andy. We are returning to the familiar trails at Bear Creek for the second time this year - how many miles have I raced there over the years? Too many to count, yet each race is different. Back to the traditional Ascent race style after the length of the CMPS…

The last race of the Ascent Cycling Series looms on the horizon. Race 5 of 5 will go down at Bear Creek Park this Wednesday night. It has been a great season and there are a lot of classes battling it out for the final podium positions that will not be decided until the dust settles Wednesday.

One more race means one more chance for me to experience entering in to race trance mode. That is what I have…

"The world is big and I want to have a good look at it before it gets dark.”
― John Muir 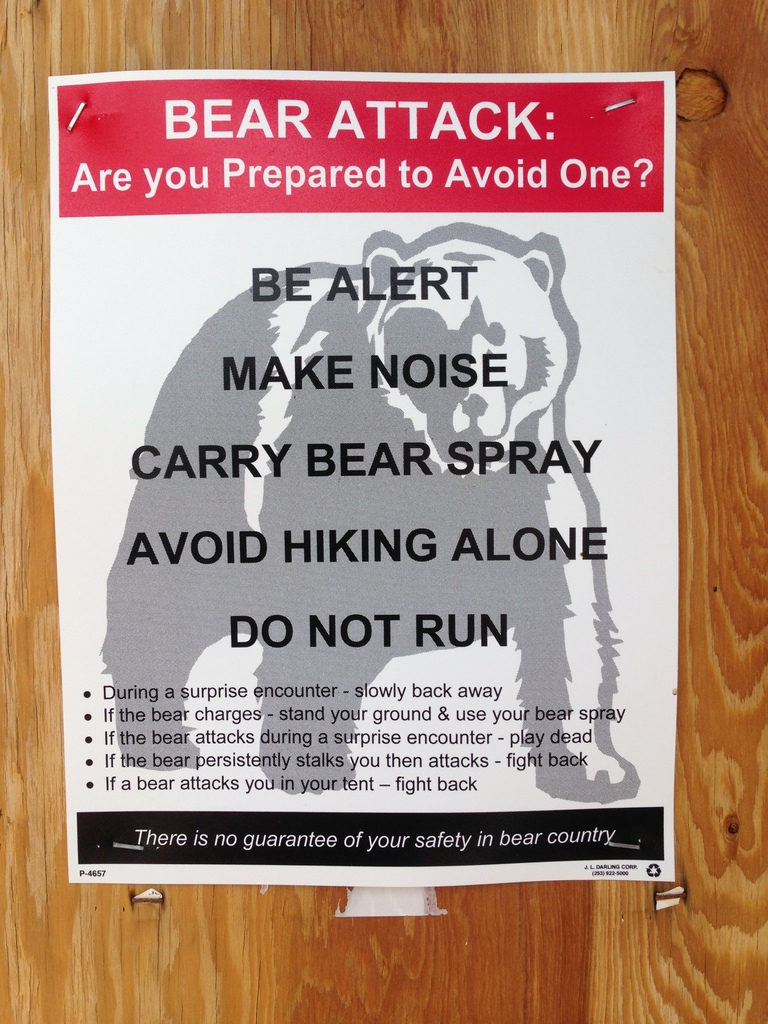 I'm finally back to having cell-phone signal and reliable access to the interwebs after my last 9 days of travel. I've calculated that I've slept in a tent almost 1/3…

The (trail) Torch Is Being Passed...Grab It!

A few months ago, I started hearing buzz from our local trail and open space advocacy groups about a new trail that was going to be built. The mountain this trail will be built on has a lot of controversy surrounding it, and has always been known as a…

The training for the PPA really began back in March when some runs went to North Cheyenne Canyon and the Chutes. From there it was Section 16, Garden of the Gods, Barr…

You know that smell that accompanies overheating engines on the Pikes Peaks Highway?  If that's how an engine reacts to the grade and the altitude, just imagine how human quads feel.  I no long need to use my imagination in this situation, because I experienced the real thing this morning.

I parked just before the gate onto the Pikes Peak Highway around 7:45am and got started with my ride around 8.  I had no idea what to expect of this challenge; no idea how long I should expect to…

The Day of the Marmot

I have finally run to the top of Pikes Peak. It was a beautiful Colorado day, a day I have most officially named, The Day of the Marmot. Our furry, mountain friends were my constant companions during the last three miles of the run, cheering me on from the edge of the trail. Here is one of my kind and fearless amigos: 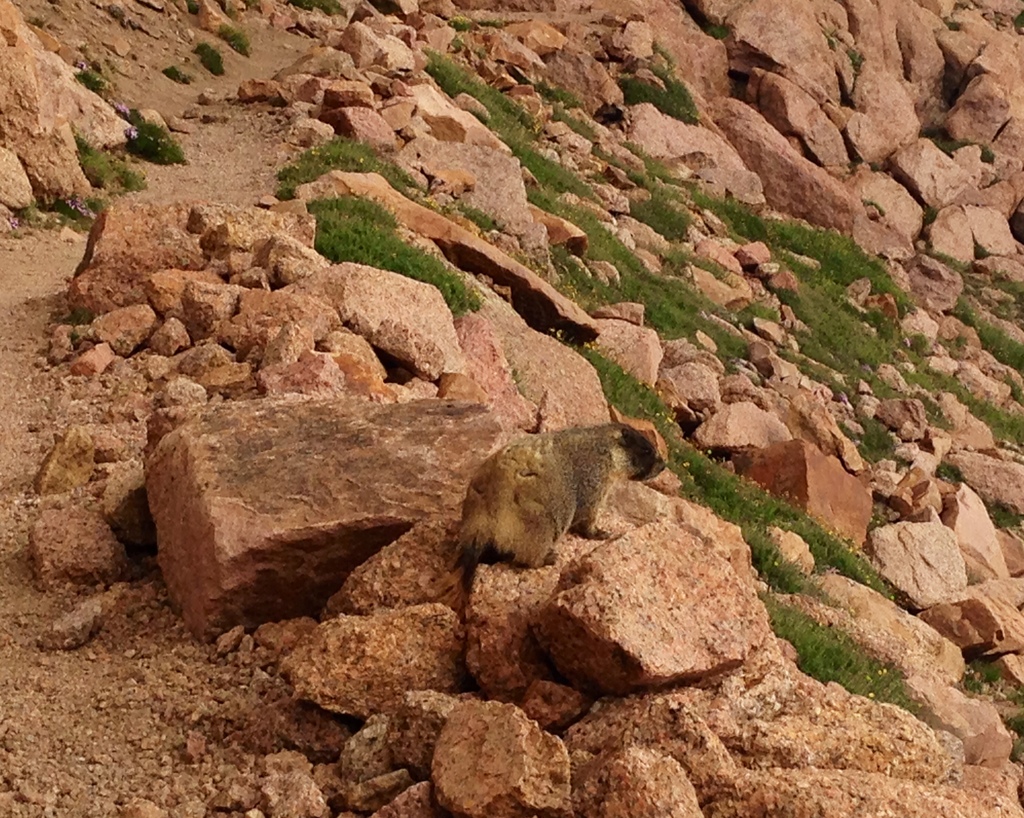 I should note that I…

Ultramarathon: Why the Hell Would I Do That? I recently decided to run my first ultramarathon, which I’ve referred to as “only a 50K” because there are options much longer than that, to which I haven’t been lured yet, even on a careless whim. I blame this endeavor partly on the fact that I’ve spent too much time around some very good, accomplished ultrarunners so that somehow it doesn’t…

Running, Hiking and Raising Children Who Think for themselves

After a few days in Breckenridge last week, it was back to our regular lives in Colorado Springs. The kids have less than one month left of their summer vacation, so we are trying to make the most of our time off.

I don't know if it was spending a couple of days living and breathing at 10,000 feet or if I am starting to really recover from chemotherapy, but I felt energetic the first few days of the week I started my running week with a 17 mile run on the Santa Fe trail. This…

Saturday's Classic 10K, part of the Grand Prix Series, was more like a shuffle that landed me at least 10 minutes from my PR.  This is a downhill course on pavement, it should have been an opportunity to set a new PR.  Instead it was an opportunity to dwell on the merits of listening to your body.  When a handful of Advil doesn't make a dent in the nearly nauseating jolt that shoots through your right leg with every step, your body is no longer politely requesting that you reconsider your…

Keeping my eyes on the goal...

The Ascent is less than a month away.  After my training run to Barr Camp last week, I now have more confidence I can finish the race in the cutoff time.

I usually set three goals for big races:  one I should be able to meet, one that would stretch me a little, and one that is my BIG goal.  Here are my goals for the Ascent:

So on Saturday, 7/19 I ran up the Barr Trail for the first time in a long while...just a couple of miles due to time restrictions but enough to inform me that I am woefully under-prepared for the Ascent. Let me just say that I'm glad they keep a light on all night at the visitors' center so I'll be able to find my way to the finish. I was thinking of incorporating some of teammate Sean O'Day's suggested Lactate Threshold training into my regimen but I think I'm lactate intolerant. Besides I…

It was a party at CMSP for so many reasons on Saturday. We got to celebrate Andy's 100th race - a decades long series of fun and rider development. And I got to start a race with people singing me happy birthday. Really, an awesome way to celebrate. Thanks everyone!

A sunny, hot and slightly (turning very) humid day greeted us racers for the 100th Sand Creek Sports race. I was eagerly looking forward but also rather dreading nine fun filled laps up Talon, across Turkey Trot to… Continue

I rarely ever say the words, "I deserve". I do not think the world owes me a good time or a reward. However, I have felt that after enduring more than nine months of the world revolving around my surgery and chemotherapy, my family does "deserve" some time to relax and have fun together. We have earned the right to set aside regular everyday lives and worries and to escape together to rediscover the simple joys in life, and to set aside the day to day stress and fear. This past week,…
Continue

Hot and Happy (when it was over) 100 celebration

Wow! That was a hard 50 mile race. As I mentioned in my race preamble, this was my third weekend in a row racing a 50 mile mtb race. This was the shortest in distance (just over 48 miles) but the longest finish time by 30 minutes. It was 45 minutes longer than it took my last week when I won the Silver Rush 50 in Leadville. Hard day in the saddle at Cheyenne Mountain State Park.

Pikes training is a blast.  Seriously, it's so much more complex and intricate than your standard 16-week canned marathon plan.  There are so many things one can do to prepare, and so many ways to leave oneself wondering if enough has been done!  It doesn't matter if you're an elite, grizzled middle-of-the-pack vet, or newbie just hoping to hit the cutoffs...there's always something more to be…

With Cheyenne Mountain State Park race promoter Andy Bohlmann will have put on 100 races. That is no small feat and something that I myself am extremely thankful for all his effort. Having lived in Colorado Springs for only four years now I was able to participate in the last part of this run to 100. In the years I have been involved I have had nearly every experience from winning, losing, wrecking, and tons of smiling. The fact that I can have all these rich experiences aboard a bicycle all…