“I have great news,” I tell my family. “It’s not going to sound like great news at first, but it really, really is.”  Pregnant pause.

Then they asked what you may be asking yourself: “What could possibly be great about bronchitis?"

What’s great about bronchitis is this: it’s an actual diagnosis. It's treatable, and it explains why I’ve been so slow on the trail, so tired and short of breath, so unmotivated. My weekly…

George Sheehan once said that the only difference between a jogger and a runner was a bib number. I loved that quote when I was running. I always took that iconic statement as a reflection on the commitment it takes to sign up for a race. It didn't matter if you were fast or slow, there to win or simply to finish. If you were willing to take a risk an toe the starting line, you earned the title of runner. That step is scary for many people as all the standard worries are voiced. "I'm not…

A gaggle of us Springs folk took advantage of the holiday weekend to head down to Los Alamos, New Mexico for the eighth annual Jemez Mountain trail run.  Jemez is a tough race run mostly through the Santa Fe National Forest and the Valles Caldera National Preserve.  Runners are treated to all kinds of fun – technical singletrack, rough jeep roads, lots of steep climbs, some true cross-country, and beautiful views of the Jemez Mountains.

Jemez has become somewhat of a tradition for me,… 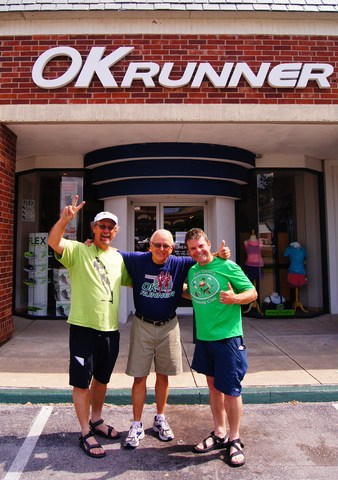 I rolled down the window and cranked up the Rock ‘n’ Roll at 3:15 a.m. as Shawn Finley and I blasted out of Colorado Springs on Saturday morning.

Our destination: Moore, Okla., a green, tree-filled city raked by a killer tornado on May 20.

I pulled a U-Haul trailer full of new and used running shoes, all donated by the awesome folks in the Colorado Springs…

Why do you run?

We all have our own reasons we run.   For some it’s to get in shape or lose some of those excess pounds.  For others it’s to relieve stress or serves as our therapy.  While others, it’s purely the competition.  For me it has been a combination of all of those things.  Lately though, because of some nagging injuries, I’ve found myself thinking about this topic a bit more.  And then I came across a story of a friend that really put everything back into perspective for me.

Hooray! I am now home for the summer – finals are done, the Pikes Peak Sports website has replaced a Free Radical Chlorination bookmark on my computer, and I’m halfway done with undergrad! And what better way to kick off the summer than a run to Barr Camp?

It was the first time for me to run with my family’s new running partner, Jeff Watson, an orthopedic hand surgeon new to the area. (Welcome to the great running community that is Colorado Springs, Jeff!) I had heard about his sub-3…

A Maverick's View of Success

I joined a swim team in third grade, the Schofield Barracks Sharks, while my dad was stationed in Hawaii. I most often swam freestyle quite successfully at all my swim meets, with the exception that I refused to dive off the platform. I would either jump or belly flop into the pool, regain my form and then swim to victory, despite my rather peculiar and ineffective start. My non-existent diving skill was certainly not due to lack of effort on my coach's part as he would even keep me…

In the immortal words of Kevin McAllister, “this is it, don’t get scared now.”  This past week, as I wrapped up work on a tough and busy semester, I found myself curiously focused, not on the 62-page behemoth capstone project for student teaching, not on finishing the research article I’m hoping to submit for publication, not on the myriad of other projects that I was tackling, but on the fact that I needed to hit the pavement.  That there are only 3 weeks left until my…

After a disaster of a 2013 Pikes Peak Ascent, Tim has brought me back on board for the 2014 PikesPeakSports.us Triple Crown Team.  You can go here to see my intro from last year.  Since I can’t figure out how to run the Ascent without getting embarrassed, I’m just going to settle for a full weekend of throttling from the mountain as I signed up for the Double.

Of course, there’s a…

With that said, having a lingering Achilles issue for the better part of the year while preparing for one of the grandest ultra-races in the country has, at times, been incredibly frustrating. Week after week of limited…

It's getting close - the opening race of the 2013 Ascent Cycling Series. Only 20 short days until we get to line up and hear Andy blow his whistle to release us onto the single track. This year might be the best yet with two dates at Palmer Park, two at Bear Creek Terrace and a return to Cheyenne Mountain State Park. I'm looking forward to all of the races, but the one at CMPS is going to be awesome. I don't know what the course is going to be, but everything at CMSP is fun. With five races…

Life is full of surprises. Cliché, I know, but these past few weeks and months have shown the truth in that.

If you would have told me when I was in elementary or middle school that by the latter part of high school and especially in college I’d be an avid runner, I would have said, “you’re crazy”. And now, I’m going crazy when I am too busy that I am forced to cut down my 2 hour workout to 1 hour, and even more so when I’m forced to take 2 rest days a week. .

And if you would…

My Motley Crew of Inspiration

Since Colorado Springs has finally warmed up enough for my liking, I am bravely abandoning my trusty treadmill this week and venturing outside to prepare for the Triple Crown of Running races.  Of course, I use the term "races" very loosely since my general goal is to keep a pace that doesn't make me breathe too hard or sweat too much.  In essence, I am too comfortable to be accurately "racing," but it sounds good anyhow to non-running strangers that don't know the difference. Of…

The Effects of Overtraining

The Effects of Overtraining Part I

~ Over training- Is a physical, behavioral, and emotional condition that occurs when the volume and intensity of an individual's exercise exceeds their recovery capacity. They cease making progress, and can even begin to lose strength and fitness. Overtraining is a common problem in several sports, but it can also be experienced by runners and other athletes. Even the best of us wanting to get better experience this

On not falling apart

Most runners have had the experience: you train like crazy, you prep for a race with good nutrition and decent sleep, the weather on race day is not so bad, and somehow, the race itself still falls apart.

The most extreme memory I have of that type of “falling apart” might involve me, standing under the Colorado bridge (less than a mile from the finish) in the American Discovery Trail Marathon, having an internal negotiation about whether I would run it in, or walk it in.  Did I…

Our Hardscrabble Mountain Trail Run courses are the 5K and 10K with the hearts of an ultra.  There's 1,083 feet of cumulative elevation gain on the 10K, and 475 feet for the 5K.

Leave your PR at home!