Barefoot running, is it a new fad, a good idea, or just a way to get hurt really easily?  I read Born to Run, and thought that not only was it a good book, but many of the ideas and bio-mechanics behind barefoot running made sense.  So like many people I went out and bought a pair of Vibram Five Fingers, and after spending last summer training in them, short runs only nothing over six miles, I was hooked.  I could really tell a…

I got an email recently from Mary, who is concerned about her swim speed. Like many new triathletes, she's new to the sport and did not come from a swimming background. She would like to compete in longer distance triathlons, but is concerned about swim cut-offs. Without seeing her… Continue

UpaDowna.com Gets A Face Lift!

Well folks, we’ve been talking about it for quite some time. And, we’ve decided to pull up our big boy pants, and move on from a “blog” and actually become a full, blown-out, fancy-schmancy website! We should be rolling out this new, streamlined uber-cool site TODAY (fingers crossed). It might take awhile, and things might get messy. BUT, just know, Team UpaDowna is working hard to make sure all of the OLD info from this site makes it to the NEW site in one piece….…

When the alarm goes off around 5:00am the dog stretches, opens one eye quizzically, then rolls over. I want to do the same, but the predicted temperture is close to mid nineties. I have some miles to do and I prefer not to bake myself in the process. It has all been coming back to me, Colorado running in the heat, bring water and gu for the long runs, and more water, oh, and water for the dog.

My runs are increasing in distance, so some days I can be out for a few hours or so. I feel…

In February I had recieved a post card in the mail from Team in Training for Leukemia and Lymphoma asking to come to a meeting to find out what they were about.  I thought, Ok, won't hurt, I had seen these people at races before.  Let's see what they have to say.  They said that we could do a Century bike race, a Sprint or Olympic style triathlon, or 1/2 or full Marathon.  The meeting stated that we would raise funds that would go towards Leukemia and Lymphoma and all blood cancers, we would…

What: UpaDowna Hike in the Cañon (meetup…

Due to a very hectic training and racing schedule my blog entry for this week will be to wish everyone the best of luck with their training, tapering, and racing endeavors.  May you hit your goals and compete injury free.

If you have any questions or comments please visit my website: www.elevationathletics.org

'Cause its a Bitter Sweet Symphony That's Life (and Ultrarunning)

I took the day off from work to head down to LAKE CITY, CO for the SAN JUAN SOLSTICE 50 MILE RUN. Joining me would be a friend, Fahren, who serendipitously had connections to a house in Lake City, and two other relative newbies to ultrarunning like myself- Brendan Trimboli and Aaron Marks (both doing the Leadville 100 in August). The four of us, Fahren's cocker spaniel/maltese name Izzi, and my lab Charlie Brown loaded (just barely) into my… 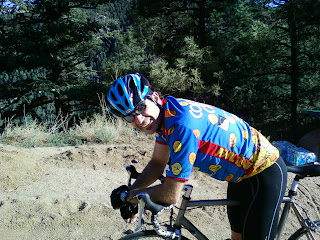 Bridget asks: "why when training for a triathlon, do we need to train so much more on our bike rather than on the run? For me, I am a stronger cyclist but a weaker runner so I feel that I need more time running but my training plan has me cycling more than… Continue 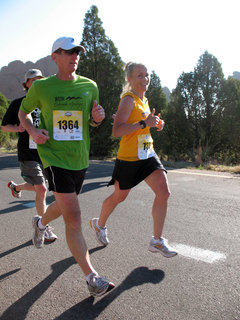 ONE THOUSAND FIVE HUNDRED AND SIXTY-FIVE runners woke up to a crisp, clear morning with temps in the low to mid 50’s.  Absolutely perfect by my standards.  I was greeted at my house by Danielle, one of my “sweat sisters” who has spent the last EIGHT weeks cheering us on as she nurses her high ankle sprain back to life and Deb, friend and fellow runner excited and nervous as a…

I was recently on a field trip with my son in Denver, with about ten other schools from around the state.  While there I could not help but noticing how rampant the obesity epidemic is in this state, and the sad thing is we are the fittest state in the country.  The really unfortunate thing I noticed is the kids are following in the parents footsteps. ( I have to say that I did not notice this being as much of an issue for the kids or parents at my son's school.)  A few weeks ago I was up…

This Friday, we will be hosting Ian Adamson from Newton Running on Pershing Field at Fort Carson from 0800-1100 to provide a running clinic. Ian is the most successful adventure racer of all time with seven world championship wins, 22 world championship podium finishes and 18 international adventure race championship titles. Ian currently races for Newton Running and is a world renowned endurance athlete, event director, published author and motivational speaker based in Boulder, Colorado. As… Continue

HOME AT THE GARDEN OF THE GODS (Race Report)

As I mentioned in a previous post, my objective for the 1st event of the TRIPLE CROWN SERIES at the GARDEN OF THE GODS was to put forth a solid effort , NOT RACE. Preparation for the run was nearly flawless. Pre-race massage two days before, check. Easy bike and swim the day before, check. In bed the night before at 10 pm, check. The morning of the event, I even got a great warm up on the two miles or so from my house to the start. Talk about convenience! Arriving…

Just updated my linx page at rollbikeart.com...  Check it out, we have so many great local organizations, businesses and artists all just a click away!

My time at the Garden of the Gods 10 Mile was 1:20:31. That was way faster than my goal and I surprised myself. My splits were pretty close (except mile 7-8) which tanked by about 20 seconds. I even got there before the thing started - which was my main concern! I took some video along the way but the only one that is even watchable is this one of the start. The others are basically just of my fingers (ha!). I tried.

We recently opened a Sports Nutrition Clinic on campus at UCCS.  Please check us out peakfood.uccs.edu In yoga class, lying on my back on the mat, eyes closed, concentrating on breathing and letting go of the stresses of the day.  My mind is resistant to settling down, I hear the…

I was showered, had my hair done, my running outfit laid out, and alarm clock set and double-checked before I went to bed the night before the Garden of the Gods 10 Mile Run taking place on June 12, 2011.  No oversleeping like I did for the Take 5 in the Garden, this time I was READY! I was so excited I must've lain awake for an hour or two before I finally fell asleep, so when I woke up by myself at 5:02 a.m., I was startled to discover the alarm clock had never gone off!  Or had…

Its taken me a bit of time to process Sunday.

Woke up, did all the usual pre-race stuff, and rolled into Manitou.

Greeted by incredibly positive and supportive team members (thanks!).

Tried to quiet my growing anxiety. Everyone looked so young, fit, and ready to kill the course. I felt a bit old, a bit slow, and a bit of doubt.Cancer takes away different parts of your self. My confidence in my body really took a hit. Dismissing the little negative thoughts , I…

Southern Colorado is home to ROLL Bike Art Festival and a vibrant bicycle community.  Two of the most notable cycling enthusiasts in the region are Professional Artist David Gonzales and Pro Flatland BMXer James Macgraw.  ROLL is the place to be as these local pros strut their stuff at the 7th Annual Bike Festival, ROLL 2011.
Gonzales is best known for his murals, window paintings and his penchant for riding his bike to every… Continue