I was showered, had my hair done, my running outfit laid out, and alarm clock set and double-checked before I went to bed the night before the Garden of the Gods 10 Mile Run taking place on June 12, 2011.  No oversleeping like I did for the Take 5 in the Garden, this time I was READY! I was so excited I must've lain awake for an hour or two before I finally fell asleep, so when I woke up by myself at 5:02 a.m., I was startled to discover the alarm clock had never gone off!  Or had it?

Who cares?  I was awake, dressed, and out the door in no time to meet my fellow Women's FIT Team members at the Safeway at 5:45 and carpool to the starting line in Manitou Springs.  Several friends mentioned they would be here to see me off at 7:00 a.m., or cheer me across the finish line approximately 2 hours and 15 minutes later, so I anxiously awaited their arrival.  Considering the line that was now forming, I was glad I hit the porta-potties early.  (Unless you're a runner who has participated in races, you might not understand how crucial that pre-race step is!)

At about 20 minutes before 7, my two best friends, Teresa Ornelas and Angie Weddle, arrived!  This 10-mile race was such a HUGE accomplishment for me, I was actually ranking it above giving birth and getting married, so their presence meant the world to me.  Crazy, I know, but you have to understand where I came from.

I have never been a runner, unless you wanted to count the two or three Fun Runs I was dragged to by my mother when I was younger.  In fact, I had only been training for this race for the last 16 weeks, and here I was today, running TEN MILES!  I ran the St. Patrick's 5K in March, the Take 5 Miles in the Garden in May, and the Bolder Boulder 10K on Memorial Day without incident thus far, but my knee had really been bothering me for about the last 2 weeks, so I thought there was a chance I wouldn't finish today.  Five minutes before the race, my son Matt and his girlfriend Tiffany arrived, but the starting line area was so crowded we had to wave at each other above the hundreds of runners.

The countdown began, so I took up my customary spot at the back of the crowd.  There were no timing chips, so I was relying on my RunKeeper app to track my time.  After the gun fired and the runners took off, I walked toward the start, waving to my "fans."  Matt and Tiffany had to leave for work, so I'm glad I got to sort of see them as I crossed the Starting Line.  I pressed "Start Activity" on my phone and began running.

Judy Fellhauer, my Women's FIT Team coach through the Boulder Running Company, ran the first mile with me, giving me pointers on pacing myself, staying hydrated, and "running tangents."  After we passed Brian McCarrie with Pikes Peak Sports videotaping the runners at Mile Marker 1, she took off to take pictures of the other team members, saying, "Well, it's only a 9-mile race from here on out!"

Because I run at such a slow ... er, I mean ... comfortable pace, I am totally able to soak up my surroundings:  birds singing, the blueness of the sky, fluffy white clouds, loogies spit on the asphalt, crickets chirping, chipmunks and squirrels scampering, and of course, the majesty of Garden of the Gods.  The hills are tough to climb without a doubt, but the privilege of seeing all that natural beauty up close and personal, especially on foot, makes it all worth it.

Throughout the race, we were entertained by high school students singing, cheering, and passing out cups of water and Gatorade.  They did a fantastic job of cleaning up all the cups tossed aside by the runners after we charged through their stations.  I hope they know how much their cheering means to us runners, especially this one!

After I crested the hill and turned south onto Juniper Loop, I was astounded to see the first runner already making his way back!  Several others trickled by a bit later, but I couldn't worry my pretty little head by comparing myself to elite runners!  I didn't care how long it took me, I just wanted to finish!  I have to say, though, that a really big drawback about running in GOG is keeping myself focused and not staring at Pikes Peak and all the beautiful sandstone and getting lost in thought.  Sure makes the time fly!

As Mile Marker 3 was coming around the bend, I was anxious to see how well my chalk art had survived the trampling of 1500 pairs of feet, and was happy to see that most of it was still intact.  At least, intact enough to be able to read everything!  After the run, several of my team members told me how much they appreciated my efforts and were really encouraged by my message.  Hooray!  Frankly, I was just glad I wasn't hit by a car while I was doing it!

The miles ticked away almost effortlessly.  Sure, I lengthened my stride going up hills and breathed heavier with the extra exertion, but my training had paid off!  Many runners were already walking and having a hard time keeping up their strenuous pace, but because I was pacing myself well, I became more and more confident that I'd be able to complete the full ten miles.  Several times, I felt a twinge of pain in my left knee, so I prayed softly, "Lord, please keep the swelling down and the pain away ...."  It became my mantra!

After MM 4, we took a turn at the handicapped parking lot entrance, a part of the trail I was not familiar with, so my level of anxiety kicked up a notch or two.  Turns out my concerns were unfounded as I aced that entire section of the park!  The "America" team was only too happy to pass me a cup of water and send me on my way back down the hill.  I was halfway there!

It's kind of funny when you're a straggler like me, because you keep passing the same runners.  They overexert themselves, poop out too soon and have to walk, I pass them, they start back up running and pass me, and the process is repeated several times from about the halfway mark all the way to the finish.  I almost want to laugh each time because it's so comical.  I should just pick up my pace and leave them in the dust once and for all, but I can't take that risk for fear I'd be the overexerted one and not be able to finish.

I really appreciated all the cheering spectators and volunteers along the race route.  These people don't even know me, and yet they scream and clap their hearts out.  I wonder if they know how uplifting that is for a Tortoise like me?  I honestly have to say that I get a bit of a pep in my step when hearing them.

As the miles tick away, I become more and more confident that I am going to make this; however, I continue to use caution, especially going downhill.  Many runners tend to let loose going down hills, but it's harder on my knee so I continue to baby it as much as I can.  As Balanced Rock looms in the distance, I know that MM 9 should be around the corner, and I continue running as if in a dream.  Before I know it, a huge "9" appears, and my chest swells as I realize, "Yeah!  I got this!"

I wind my way through the tail end of the park and head towards Memorial Park.  Police still have roads blocked, spectators shout out words of encouragement, I pass the same two runners, and plod up the steep hill back to Manitou.  "Just a half mile to go!" I hear three times.  Jokingly I say, "That's what the last guy said a quarter mile ago!"  Finally, I see Judy up ahead--boy is she a welcome sight!  The finish line must be within sprinting distance.  She falls in beside me, and we chat as we run to the top of the hill.  The Finish Line is now within sight, and I turn my head and grin.  "Well, this is where I sprint to the finish!"  "Go for it!" she encourages, and I take off, arms and legs pumping.

Off to my left are Teresa and Angie, cheering me on!  I wave as best as I can, soooooo incredibly grateful that they stayed the entire time!  My knee is holding out, even at this "breakneck" speed (as breakneck as it can get for a Tortoise!), and I'm nearing the "chute," the area where the cones funnel the runners into the timing area.  A fellow FIT runner blocks my path, forcing me to slow down, and I become a bit miffed.

The timer reads 2:21:something-ish, and I realize that the clock signals that the race is complete!  It's a bit chaotic as I "Stop" my RunKeeper at 2:20:13, hands reach for my bib to tear off the bottom, and many smiling faces congratulate us on a job well done.

My heart swells with pride and tears sting my eyes.  I DID IT!  I DID IT!  I DID IT!  I exit the taped-off walkway and head towards Teresa and Angie.  I have blinders on due to being so focused on my destination (or was it my tears of joy blurrying my vision?), so that when a tall, well-dressed body with outstretched arms blocks my path, I look up to see the face of MY SON!  He hugs me tight and I burst into tears!  "I DID IT!"  I sob against his chest, surprised to see him.  He squeezes me tightly, "Yes, you did!  I'm so proud of you, Mom!"  The tears are flowing unchecked now, and I turn to hug Tiffany.  Then Angie and Teresa are there, hugging and congratulating me, then Angie's son Garett, who's a new addition since this morning.  Matt, who is now in a dress shirt and tie, explains he went home to get ready but came back to see me finish before going in to work.

I rehash the entire race for them.  We take some pictures, and Angie bestows my completion medal around my neck.  Somebody pinch me!  Nothing compares to the way I feel right now, physically and emotionally!  It's overwhelming!

While Matt drives me to my car, I realize that I'm secretly grateful that he was the first to congratulate me at the Finish Line.  I call my mother, who wanted to be here but couldn't make it, and leave her a message that I just finished the race.  I then call my husband, upload some pictures and update my status on Facebook, and "float" home.

Hmm ... when did the other runners say the Denver Half Marathon was being held ...? 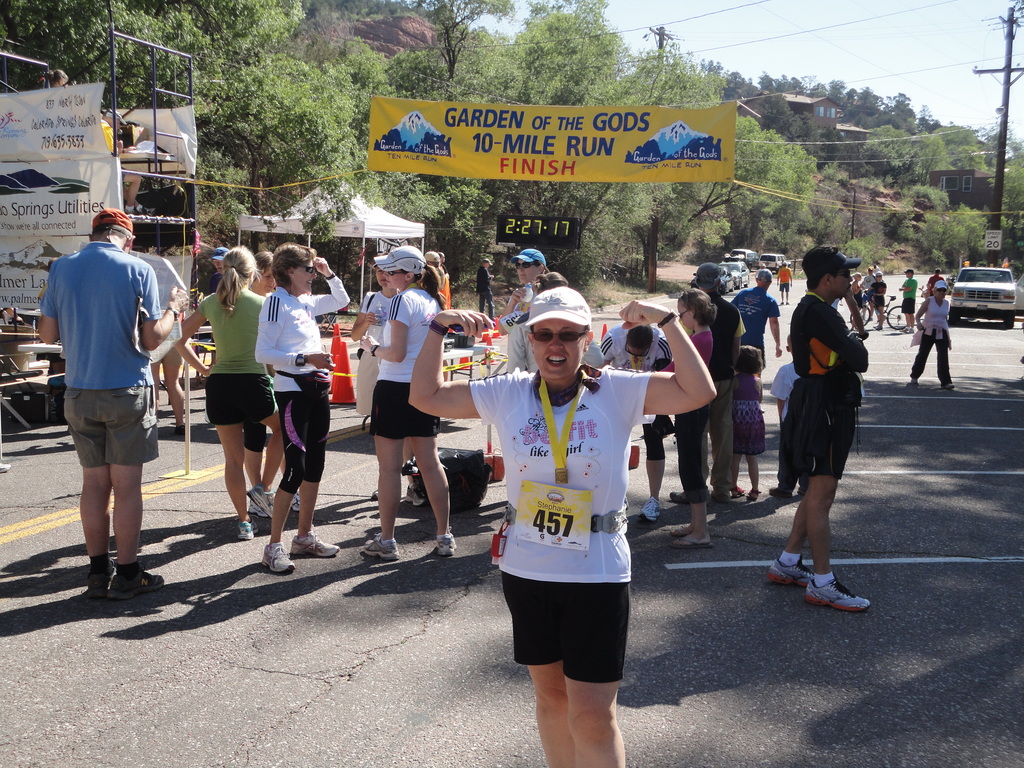