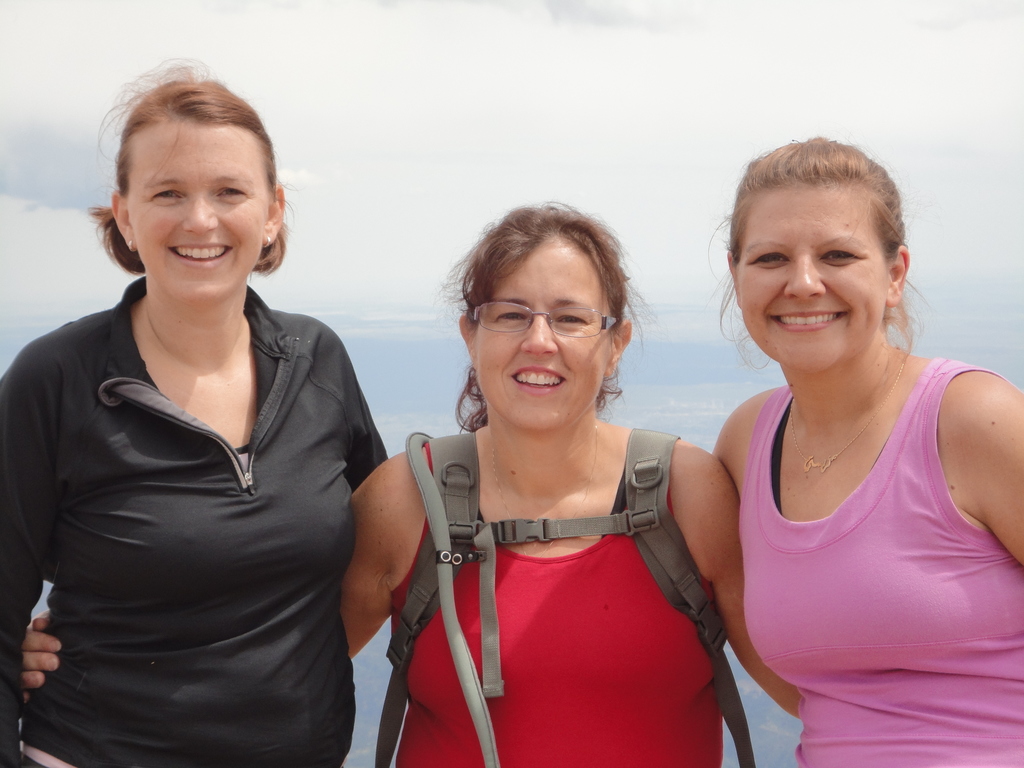 Ever since I visited Colorado Springs in the late 70's during a cross-country road trip with my family, I've had a deep respect for Pikes Peak.  My dad towed our 28-ft. trailer up Pikes Peak Highway in the middle of July, and when we reached the summit, we were greeted with a hail storm and had a snowball battle while running around in shorts and flip flops.  In 1996, when I decided to make Colorado Springs my home, it was that very same mountain that convinced me to move here.

As I exited my place of employment on 8th Street on Monday, however, I saw the Purple Mountain Majesty with new eyes:  I CLIMBED that 14,115-foot mountain yesterday!  No big deal to probably many of you, but for this former 237-lb. couch potato, the realization brought a sting to my eyes!

Many times I have attempted to lose weight and live an active lifestyle, but it wasn't until I took up running back in February that this change finally stuck.  That's not to say the journey hasn't been a chair of bowlies, but for someone who never curled a 5-lb. dumbbell, let alone laced up a pair of running shoes, it is an enormous accomplishment.

Just today while I was chatting with a customer at work, she mentioned her young adult children were doing the Ascent. I nonchalantly mentioned that I climbed it last Sunday.  "What was your time?" she asked.  "I did it in under 7 hours."  She was not impressed.  "My kids will finish in less than 3."  Well, la-dee-da!  I had to kick up the bragging rights, "Considering I used to weigh 237 lbs. and only started running in February, I think I did pretty good.  But we only hiked it, we didn't run like I'm sure your kids are doing."  THAT got her attention!  And her respect.

Running has made all the difference to me.  After losing 60 lbs., I hit a plateau and knew I had to take up a new activity to keep me motivated.  Why not running?  My mother was a dedicated jogger most of her life, setting a terrific example, although I never expected to fall in love with it the way I have.  Since beginning my training, I ran the St. Patrick's 5K in March, the Take 5 Miles in the Garden and Bolder Boulder 10K in May, and the Garden of the Gods 10 Mile Race in June.  Another huge feat I added to my repertoire was to climb to the topmost point of the Great Sand Dunes near Alamosa, CO, something I was unable to do 11 years ago, thanks to my obesity.  Now I'm signed up for the American Discovery Trail Half Marathon in a couple weeks, and the Rock-n-Roll Half Marathon in Denver in October.  I keep telling my friends I'll never be "hardcore" enough to do a full marathon, but I'm already looking at the possibilities of running one in Vermont with a longtime family friend next year.  I must be crazy!

In all seriousness, it was one of the most grueling, yet satisfying accomplishments to date.  My hiking partners, Lisa Darden and Christy Selvig, and I arrived at Barr Trail in Manitou at 4:30 a.m., and were on our way 10 minutes later.  Headlamps lit our path until the sun came up, allowing us to enjoy the dawn and coolness of the tree-lined trail.  We arrived at Barr Camp in less than 3 hours and took a short lunch break alongside the chipmunks.  Two hours later, we rested at Treeline, then arrived at the Summit just past noon. Many times I would look ahead at the "little ants" making the climb ahead of us and think, "There's no way I'm going to survive this!"  But it's kind of like giving birth:  there's a lot of pain and agony getting there, but once you reach the top, it's totally worth it!  I think that everyone who is physically capable of doing it, should.  The panoramic views left me breathless and dizzy ... or was it the altitude?

One thing that really impressed me was the camaraderie of all the other hikers/runners/walkers/bikers (yes, there were two on bikes) along the trail.  Many smiled, greeted us, encouraged us on to the top.  I don't know ... there's some kind of unspoken alliance among athletes where the more-seasoned folks have a twinkle in their eye as they think to themselves, "I was there not too long ago."  They're excited and more than happy to share the mountain.  And the experience.  We chatted with a 69-year-old woman, who was training for her eighth 100-mile race, and her friend on their way down.  You just never know who you're going to meet on the mountainside!

When we became lost in a sea of tourists (who obviously took the lazy man's way up) at the summit, I had to fight back tears.  Turning 360 degrees, I basked in the glow of the high that only comes with reaching the finish line.  Yeah, I think 13 miles and 8000 vertical feet in less than 7 hours is pretty darn good for this adult-onset athlete, especially since I had no pain or soreness in the days following.

One thing's for sure, I'll never forget this moment, and now every time I look at Pikes Peak, I can proudly say, "I climbed that!"