MtnMama from UpaDowna shares her top faves from the Winter OR in SLC, UT.

Wow. Totally blown away! Here is just a sneak peek of a couple of things that caught my attention at the Winter Outdoor Retailer.

KEEN.WARM Heat Trapolator- can a winter boot be warmer without being bulkier? According to Keen…hells yeah! This honeycomb, lofted insulation works a lot like an attic…the more air there is, the warmer…

Ask the Coach - How Many Bottles of Beer on the Wall?

(This post and other articles and training tips found on http://neoendurance.blogspot.com)

Joe wrote to me on facebook today: With the Superbowl just around the corner. I have a question for you about alcohol and recovery. I am in my preseason for training and was wondering what the affect of a couple of beers would have on my recovery? Would it be recommend…

Well it's interesting that back in the hey day of mountain bike innovation there was one thing that never truly was tackled well, the dirt drop. Chucky Cunningham and the boys at WTB (Wilderness Trail Bikes, pre-Global empire) offered the much loved and sought after, WTB Dirt Drop. $50 for the handlebar in a day when handlebars didn't cost $50. Yet they figured out special stems and shifter pods to slap your thumbies on for them. Can't hardly find a pic of a Cunningham bike without a dirt…

Recently at the Winter Outdoor Retailer Show in SLC, Utah, Teva made a HUGE announcement that they will be adding the Winter Teva Mountain Games. The games are scheduled to take place on February 9th-12th, 2012 in Vail, Colorado. Although I haven’t seen a full list of events yet, they will include art and music components, with snow and ice sculpture contests, free concerts, films and…

Here is my first painting for the year 2011!

It's named "Linger".  Check it out!
This is a portrait of a lady who has a
personality similar to my bro Chris.

Ask the Coach - The Six Pack

This post along with other useful training tips and information can be found at http://neoendurance.blogspot.com.

Dutch (aka @RangerDutch) asked me an interesting question today, one that many endurance athletes and fitness enthusiasts probably think about: How much should I be eating to support my endurance training AND… Continue

After I completed the Chicago Marathon I notice my toenails were black? What causes this and how can I prevent it from happening?

Recent trauma to your toe may have caused the toenail to become black. This is because it is bruised and blood has gathered under the nail. Some causes of black toenails can be wearing no socks, having too thick of a sock or having shoes that are too…

My first ascent up the Incline, with the Spikes was interesting! It took me a little while to become accustomed to them; specifically, how to plant my foot, on each step. With the snow beginning to melt, a lot of "ties' were exposed. With the substantial spikes on this great winter tool, a couple times I found a spike 'catching' on the wood. So, I then needed to watch carefully where, and how, I planted my foot. A fellow passed me (running) with them on his feet. I said "how much do you love…

Ask the Coach - Swimming for Athletes

This post and other useful training tips can also be found at http://neoendurance.blogspot.com. 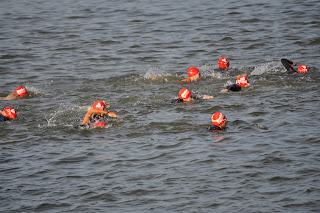 I received a request via twitter from @iRun2BeFit asking if I had any swimming tips.… Continue

Mark your calendar for these fee-free days in 2011:

Colorado Springs runners and riders, get ready for an all new kind of competition. Our new friends at Big Mountain Adventure Racing just posted this on their website.

Registration for the Rock2Rock Adventure Race is Now Open!

Kick start your adrenaline reserves from the winter…

I've heard that lifting weights is beneficial for runners. But if I had extra time to do that, wouldn't I be better off using it to run a little more?

Weightlifting and other forms of strength training help runners in three ways.

First, they enhance performance, mainly by boosting running economy.  The legs function like springs during running.  Research has shown that weightlifting and plyometrics (jumping exercises) make the legs springier, so runners move faster with less energy.

Losing weight is easy.  Keeping it off is the hard part.

I’m a compulsive overeater and food addict.  And a stress eater … and a boredom eater … and hey, while we’re at it, let’s throw emotional eater and “just-because-it’s-there” eater in there, too.  I tipped the scales at 237 in 2001, and at only 5’1”, that’s fat!  Over the past two decades, I have been on and off diets, losing anywhere from 30 to 80 lbs.  No matter how many successful starts I’ve had, something—a family…

We all want to lead a happy, successful, and balanced life. And we all struggle sometimes to find the energy and time to meet our goals.  In this article, I look at some of the meanings of the phrase “feeling your best” and some of the ways we get off track.


From my perspective as a personal trainer, I see a lot of goals coming back to “Eat right and exercise.” These are the behaviors that give us the health and energy that our other goals require. At the same time, I do see that some…

Save on Dances With Dirt Green Swamp!

I guess the one thing that's good about an all day conference inManitou Springs is the fact that it comes with a one hour lunch break.Not only did I enjoy a slice of pie at the awesome Ruffrano's Hells Kitchen Pizzeria, and take a small jaunt up the Manitou Incline,but I even had time to meet and take photos of a family on their firsttrip up the incline! The… Continue

Pops, when he was wrapping up a story, would cap it with a famous saying used in a western movie.  I don't quite remember what movie or who coined the phrase, but he would love to say "That's the way it was, going west..." in his hills of northern Connecticut-rumbling voice.  Now, after time has gone and done what's inevitable, I am proud to keep Pop's great sayings going strong by recalling "the way it was" with the Las Vegas Marathon.

It was cold that morning.  The sun…

I'm usually pretty humble but this was a great surprise that i wanted to share it and thank everyone that has been a very important part of the process.

Wanda McCormick,  a lady that came into a new town (Colorado Springs) in…

Do you need a little internal "housecleaning"?

This is an invitation and strong recommendation to join me in getting fit and feeling energetic as we kick off the New Year.

I've seen a distinct correlation between my energy, focus and fitness level over the last five years, since I changed careers. As many of you know, it's made all the difference in the world in my passion for helping others in a big way and having the stamina to continue toward making my business everything it has become and to work toward the millionaire status I… Continue

"Cycling the Springs"   a Road Cyclists guide to Colorado Springs and its surrounding areas is now available.

This book has all of the road cycling routes (no dirt, no trails)  from South Denver all the way through Colorado

The book is 235 pages and includes information about the areas, routes, elevation gain, distance and

also detailed route sheets at the end of the…