Crazy Legs,
How do you deal with the aging process? Especially the part that includes running slower? It depresses me.
kara

First a few facts. It would appear that the body reaches peak efficiency at the age 30 and then declines in many ways. Using age 30 as reflective of 100% performance, we see the following: (a) pumping efficiency of the heart is reduced about 20% when a person…

How many years have we found ourselves doing the same old thing? At the first of the year, we make that resolution to get in shape and stay in shape. Everyone does it. That’s why the health clubs are so busy in January. But by Valentine’s Day most of us don’t even remember the way to the gym. The health clubs don’t care, they got their money. We keep paying them each month, hoping we will make it back. But life takes over.


Tell me this, why do we put our health on hold until January…

I am Paul "Crazy Legs" Stofko running coach, race director, ultrarunner and member of the Saucony's team Hurricane. My friends at Ice Spike ask me to put this blog together to answer your running and fitness questions. Please e-mail your questions to me at stofko121@yahoo.com. More great articles about running and fitness can be found at Ice Spike's blog "The Edge"…

One of the hardest aspects of my job as fitness coach is to tell you that you may have to eat more! Try telling a woman that has dieted most of her life that she isn't eating enough and that could be the reason she just can't get those pounds off.
Eating smaller meals but more often also boosts your metabolism which in turn burns more fat and the cycle keeps going. Keeping an eye on what you eat is just as important as when you eat it. Skipping meals may tempt you into eating more when…

I was looking for an adventure. I got one.

My best ride would have to be when I was 19 and I tried racing bicycles. I could not hold a high pace for long enough to finish a crit race. I had been training hard and decided that I could do better than I had in the past so I showed up for a small race in MD. The race started off like the rest the pace was around 30mph. I was near the front just trying to hang on on this 3/4 mile circiute of 4 90 degree turns. After a few laps I knew that I was not going to be able to hold the pace if…

Ask the Coach - Training for both On and Off-road Triathlons

This post and other useful Ask the Coach posts are found on http://neoendurance.blogspot.com

Sunny writes: I really got into the road and Xterra triathlons last year. I noticed that I wasn't as prepared for… Continue

Wow...my best ride has to be the epic end of summer ride I did at the end of August to the top of Mount Evans. Starting just before sunrise in Englewood, a group of seven - the "magnificent seven" left for a day we won't forget. We headed up to see if we could summit Mt. Evans. The general route: Englewood - Morrison - Evergreen - Echo Lake - Evans Summit - Echo Lake - Idaho Springs - Morrison - Englewood. Truly 130 miles of Epic Epicness. All of us summited, a couple opted for the quick… Continue

My BEST race (so far)

The good thing about driving 45 minutes north to work every, single day, is that I get to see Garden of the Gods and our lovely
local 14'er Pikes EVERY day! I can't help but smile when I see both of
these beautiful formations. It makes me feel at peace and at home (I'm
a CO native but love reminding myself why I live here!) Hence the
reason why I did the Triple Crown of Running this year.
On one of those mornings in March, I noticed nothing but dark,… Continue 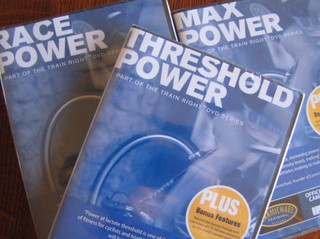 There is nothing like a great day on your bike, or a run on area trails to make you feel alive! Tell us about your best day of riding, running, hiking or racing and we'll enter your name in a drawing for the new Carmichael Training Systems Performance discs. Here's how you can win.
1. Write a blog about your best cycling or running experience. Tell us what happened, how did you feel, where did it all go down? Tell us what you'll always… Continue