The Nomadic Runner Runs in the Rain

I'm sitting outside waiting to check out of my 6th residence in the last 8 years. I've lived in Colorado Springs for 8 years and love it here, however, I've done a little bit of moving within this area including a stint in Manitou.

I guess I get restless or I'm afraid of commitment. Regardless of my numerous addresses, running and I have had a consistent relationship over the last 7 years.

Whenever life gets hectic, running is there for me. After moving and unpacking over… Continue

Oh, did I say I was running hills in training? heh, heh. Oh, no. No, no, no. Not in the slightest. Wherever did you get that idea?

When I was training for my first Ascent (2012), I lost count of how many people told me, “Work on your speed walking, because you’re not going to run the Ascent.”

Words of wisdom to be sure. For one thing, unless you’re one of the real fast dogs up front, when you get to the spur trail at the…

Fun During the Journey

Since late April every run I have completed was geared towards the Garden of the Gods 10 mile race.  I have done some speed work, tempo runs or hills to get ready for this race.  I am very excited to be a part of the Pikespeaksports.us Triple Runners team and have enjoyed the labor I have put into the training.

However, on Monday I did a run/race just for fun.  The Bolder Boulder is a wonderful race and the only race I do strictly for fun.  This race really brings out the special fun…

I Bolder Bouldered yesterday with 50,000 of my besties.  As a first-timer I was in awe much of the time.  It was an awesome event to behold - from the costumes (including a dude wearing nothing but shorts depicting Michelangelo's David and a girl dressed like a gnome) to the skydivers to the elite runners (I saw freaking Shalane Flanagan run!) to the Slip n Slide.

As you dear and loyal blog-readers know I'm pretty hard on myself.  I say this honestly though - yesterday I ran like…

Time Marches On, but it is never too late to become a runner.

I have completed cycle #5, treatment number 15 of chemotherapy. I am really happy about that. My official end of treatment date is June 16, 2014. I have three treatments left following an off week this week.

I continue to run, or run/walk. On Monday, Steve and I ran before treatment. We…
Continue

May signals the beginning of summer here on the Front Range.  Up in the mountains, however, it's prime snow climbing season.  For a short period of time, temperatures up high consistently rise above freezing during the day and drop below freezing at night.  This causes snow that has been deposited in shallow gulleys or couloirs to repeatedly freeze, thaw, and freeze again.  This in turn stabilizes the snow and makes it safe - and fun - to ascend, provided you have the proper gear.  Often…

Inspiration to Run Another Day

Although I have run in some capacity for the past 21+ years, I have NOT consider myself a serious runner. I did some training for a half marathon in 2010; but until I decided to try to qualify for (and finish) the Pikes Peak Ascent this year, I was not running very consistently and definitely was not doing any long runs.

However, once I found out I was chosen for the PPS…

I spend a lot of the year watching kids run, as a high school cross country and track coach. I love passing on my love of running to young adults, in hopes that they will become life-long runners or college athletes. When I knew the baby was coming in February, I decided to take the spring season of track off. Being a great teacher, coach and mom is very difficult...and being a mom comes first.

Typically, my spring flies by and I jump into the summer feeling like a stranger in…

A Blood Offering to the Trail Gods 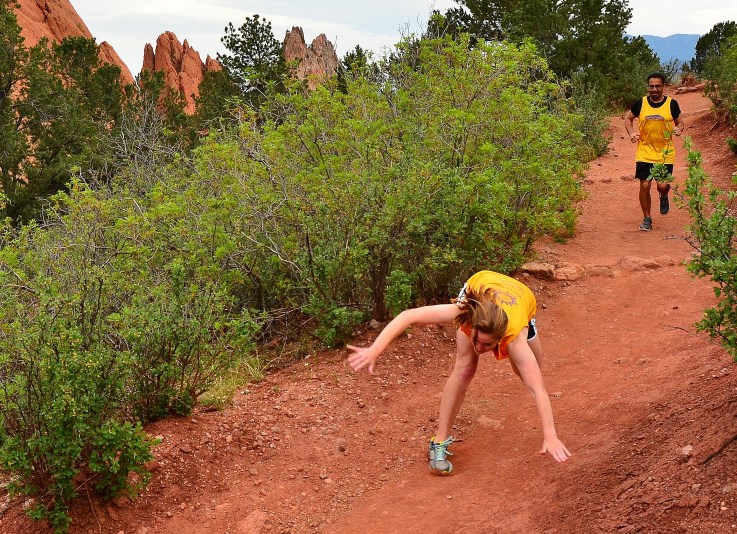 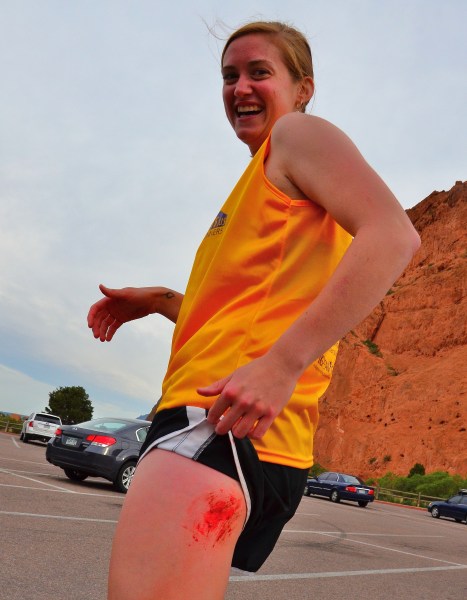 Like any rational first-time-Triple-Crowner, I'm a wee bit nervous about the upcoming Garden of the Gods 10-Miler.  So, I thought I'd make a sacrifice…

It's as Easy as Riding a Bike 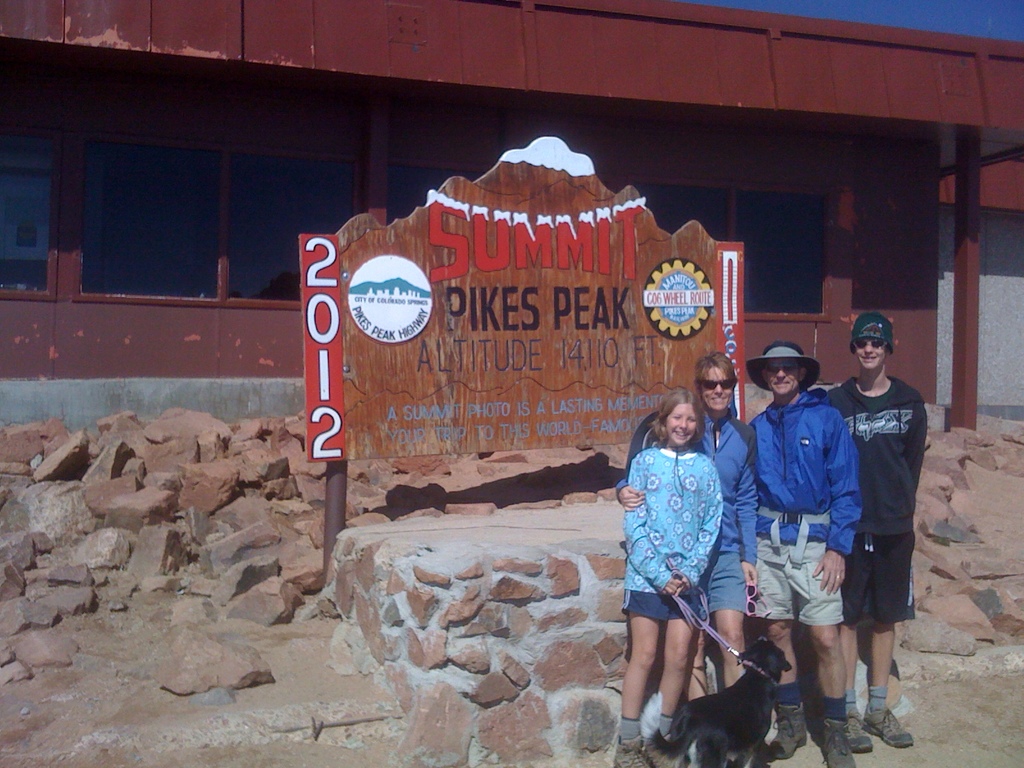 Three summers ago I was biking home with my family when my bike suddenly collided with my husband’s bike. I’m sure this accident wasn’t my fault, but while my husband, Matt, jumped over his bike and managed to land on his feet, I fell to the left and landed hard on my knee with bike on top of me. The next thing I saw was Matt and the kids standing over me as I lay in the…

...your car serves as both a mode of transportation and a locker room.

... your car also serves as a sort of lost and found - shoes here, winter gear there, water bottles under the seats, bras in the glove compartment, etc.

...you have actually discussed peeing in the woods with your boss.

...entire seasons are planned around races.

...weekends are not meant for sleeping in, they're meant for long runs.

..."splits" have very little to do with…

Rochelle Persson, 46, from Colorado Springs, placed 7th Masters and 2nd in her age group in last weekend's Göteborgsvarvet, the world's biggest 1/2 Marathon, with more than 64.000 participants, with a personal best time of 1:29:23.

The race was run for the 35th year and is considered one of the world's biggest sporting events.

Gothenburg, Sweden's 2nd biggest city is at sea level and the race is known for somewhat blustery conditions, but on this particular day, the weather…

Training daze are here.  Not sure if anyone has ever used that term before but “Bubba” has now coined it.

The frequency of training daze has increased.  Not sure it is reflecting in the miles yet but I did get some extra days of running in.  The mileage still must increase because the Garden of the Gods 10 mile race is coming soon.  It is going to be a tough race but it is worth it because I am super excited about being on the PikesPeakSports.us Triple Crown Runners Team!  I love the…

Sometimes You Have to Run Scared

Running can be a very mental sport.  Those who finish races usually have some degree of mental toughness.  There are many barriers you have to push through and obstacles you have to overcome in order to succeed in running.

This week I had a major mental obstacle to overcome leading…

I kind of have a love/hate relationship with the Garden of the Gods.  Before I had ever set foot in the great state of Colorado, I knew the following about Colorado Springs.

This is a weekend of milestones. Today, Sunday may 18th marks six months since I had surgery. On that date, my surgeon removed half of my pancreas, my spleen and a bunch of lymph nodes.

This photo was taken November 22 while I was still in the hospital. …
Continue

Disclaimer: I’m no expert at running, nor am I an expert on injury prevention so I offer only my own meandering experience.

I tend to be a little type-A sometimes and I tend to ignore nagging pains until they get so severe it completely prevents me from running. I’ve learned that self-care, rest-days and maintenance are just as important as the miles and workouts I put in.

Why are You Soaking Wet?

This is a story of awesome runs and classic mishaps.

I joined two other badass runners for 7.5 miles in the Garden this morning at 7am.  It was one of those runs that restores your faith in yourself as a runner – pure joy backed by a willingness to push hard and throw in extra hills just because they’re there, waiting to be climbed.

By 8:30 I was on my way to the Girls on the Run 5K at North Monument Valley Park.  The important part of that last sentence was the word “North.” …

Since the crowning achievement of the Triple Crown is climbing a mountain, it is only fitting and proper to include hills in one's training is it not? So let me introduce you to one of my favorite little places of pain, a little something I call "LRB." It's located in Fox Run Regional Park and comes about 2.5 miles into a 3 mile loop (in the direction I run it). Attaching a video and some pictures (in photos) for your consideration.…

I took a four day hiatus after my graceful fall on Barr Trail (it was actually more like a fall off of Barr Trail) on Saturday.  It was four days of mind games: am I the only runner on the planet who believes that if I take a few consecutive days off I'll lose everything I've worked toward (altitude training, hard won strength on the hills, etc)?  These were my legitimate concerns for the past 96 hours (four days off sounds like a pretty measly accomplishment when I put it into hours). I…