Meadow Muffins is kicking off the Muff's Running Club on Thursday, April 1.

And this is no April Fool's joke. The running craze is back in Colorado Springs with organized runs setting participation records on almost every Saturday.

So lace up those Nikes and head on down to this long-time watering hole in old Colorado City.

The 5K run begins at 6 p.m. You don't have to run - especially if you've already had a couple. Walking the distance is fine, too.

Simply Up a mountain Down a beer. This site serves as a means to
bring people together in a celebration of like minded folks. The focus
of this blog is to allow a doorway into the hills by providing
information on backpacking, hiking, camping, cycling, climbing,
bouldering, wilderness survival, skiing, snowboarding, and beer!!! 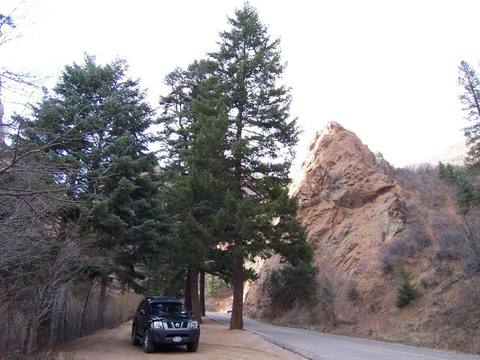 I started at my house over by Garden of the Gods and took 31st South, crossed over Hwy 24 past the Red Rock Canyon parking lot and around to 26th St. Took 26th st. south to Lower Gold Camp and past the Section 16 trail head. Took Lower Gold Camp up past the top of the chutes to where the pavement ends. Turned around and back down to 21st St. Took 21st St. south to Cheyenne Mtn Blvd. Took that west to the entrance of Cheyenne Canyon where I stopped to strip down a…

About a year ago, my husband and a friend of his started a small organic garden on my parent's ranch south of Fountain. Since then, it's become a 16-member CSA that grows over 20 different types of veggies and fruits.

Being a part of that has brought many changes to our life. We have moved from our mountain playground in Green Mountain Falls, to the plains. Another change I've noticed is our 2 year old son. When we would include lettuce and other store-bought greens from the store, he… Continue

I love the snow and all but getting up at 5:00am and driving on an ice rink to the pool really isn't my idea of a good time. So I'll be riding the bike trainer today!

It's not very exciting and I don't update it nearly as much as I should... but here's a link to my training blog: http://coloradocory.blogspot.com/

At this point, it's just for my upcoming Ironman 70.3 in June. However, I'm sure I'll have more races that I'll keep blogging about. Enjoy!

Walk breaks are NOT wimpy--they're effective!!

The following information, ideas and suggestions for taking walk breaks while training or competing in a long-distance event are from Jeff Galloway’s book, Galloway’s Book on Running, Second Edition. Jeff Galloway was a world-class runner, Olympian in the 10K, and one of a…

Severy Creek Trail will likely open, but not this summer

The U.S. Forest Service said on Thursday that the Severy Creek Trail on the northeast side of Pikes Peak, closed since 1999 to protect an endangered trout species, will probably be open for hiking in summer 2011.

Gallup polling: Colorado Springs is No. 4 among America's fittest cities - Fort Collins is No. 1

The folks at Gallup polling along with Healthways have determined that Colorado Springs is No. 4 among America's fittest cities with 17.2 percent of our population considered to be obese.

The cities with the highest percentage of obese residents were Montgomery, Ala., and Stockton, Calif., at nearly 35 percent. Obesity is considered to be body…

Hey everyone!
Thanks again for joining PikesPeakSports.us, the digital stomping ground for the outdoor community. This is your friendly site administrator touching base. We appreciate your interest in the site and we want to be accountable. We’ll try to get a message out to everyone once a week.
By now, you probably all know our goal of creating community by connecting runners and riders, hikers, climbers and those pumping iron at the gyms. We also want to include the businesses,… Continue

If you see one of these in Colorado Springs, take a photo, send it to us...stat

Have a look at these new bikes (featured in WebEcoist article) and it will be apparent that these bicycle designers are having way too much fun. This fold-up model has a flexible frame.

I am for bikes. I'm for long rides and short rides. I'm for commuting to work, weekend rides, racing, riding to school, or just a quick spin around the block. I believe that no matter how I ride, biking makes me happy and is great for my health, my community and the environment we all share. That is why I am pledging my name in support of a better future for bicycling—one that is safe and fun for everyone. By uniting my voice with a million others, I believe that we can make our world a…

This weekend's Peak Region Cyclist show was a good old time. Getting a feel for the local cycling community, and connecting with a lot of good people made staying inside on the nicest saturday this year totally worth it. Props to the Front Rangers Junior riders for winning the 1min watts/kg test at the Carmichael Training Systems booth. Those kids are going places.

Ride the Pikes Peak Highway from the toll gate to the summit, Aug. 29!

Finally, a race/rec ride from the Pikes Peak toll gate to the summit. Summit Cycling Promotions has it lined up for Aug. 29. Registration opens in about three weeks.

This from the Assault on the Peak Web site: "Summit Cycling Productions, in cooperation with the City of Colorado Springs, The City of Manitou Springs, the U.S. Forest Service and The Pikes Peak Highway,…

Register for the Pikes Peak Ascent and Marathon on March 17

It's almost time to register for the Pikes Peak Ascent and Marathon. Everybody get ready for some fast typing. Create that Active.com account (if you haven't already) and mark your calendars for March 17. Get all the information you need …