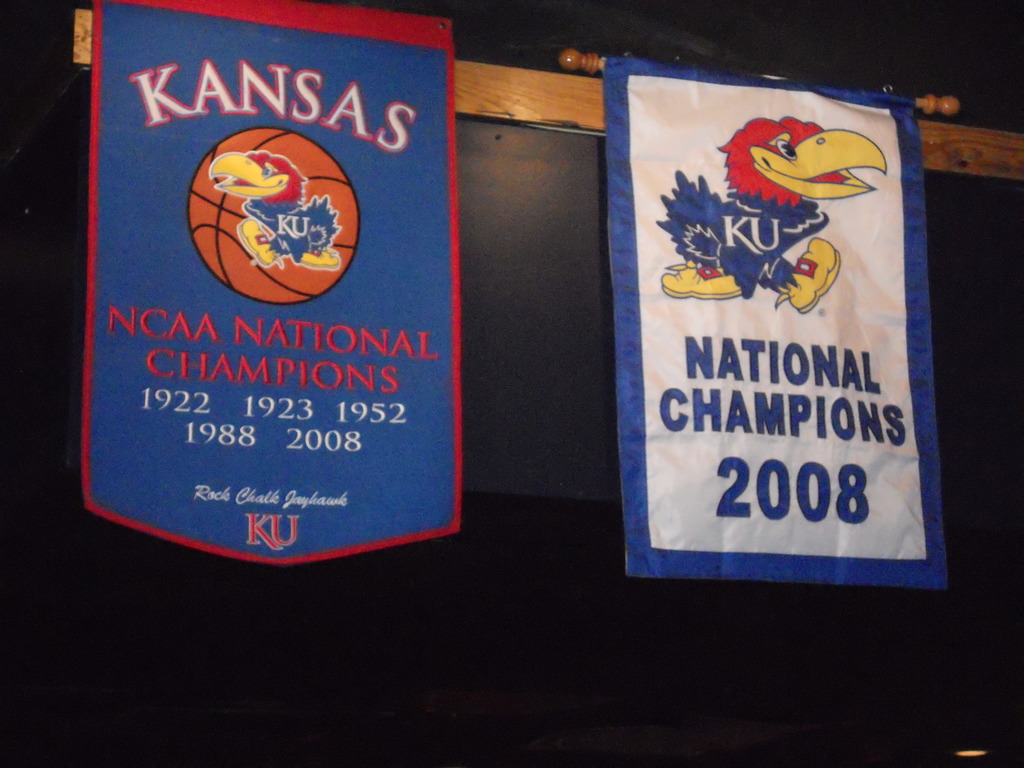 First, let me just apologize for the long delay in providing this race report. There are several reasons for the lack of promptness. The first would be work. As soon as I got back from the race I immediately caught a plane to San Diego to meet with our IT Department. After returning from that trip, I spent the weekend with our small work group doing some team building, white water rafting in very cold weather (a blog to come on that one!) The second reason for the delay was a somewhat poor attitude after the race. I was disappointed and somewhat embarrassed by my time. However, fear not! I have moved past the emotions for the most part! So let's get down the details about the race.

Prior to leaving for Kansas, I met up with Lisa for a short easy ride on the Air Force Academy roads. During that time we discussed strategy and she gave me some great hints. I had also chatted with Jill, my physical therapist, and it was decided that I should not run on Sunday. Therefore, the plan was to complete T2 and then quit the race. That way I would not hurt my hip further just in case it was a stress fracture that has been plaguing me the last month. Brad and I took off after work on Thursday. We drove to Hays, KS and then called it a night. The first thing we notice when we stopped for the night, yep the humidity! Damn it was humid and hot! Now, I grew up in Kansas so I knew that is was going to be like that but I had totally forgot how it felt!

Friday Brad and I got up at about 8a and had some breakfast. Then we hit the road again. Nothing to eventful here. We sang to the radio, chatted and just enjoyed the moment. We got into Lawrence right around lunch time so we hit a small Mexican restaurant. The food was not great but then no surprise there either. The beer however was great! We hung around the hotel waiting for my brothers to arrive. They showed up around 3ish. My brother Chad was in a great mood. His divorce papers were signed so that meant celebrations were to begin. I had already been lectured by coach about getting drunk so I stayed away from all that craziness. Too bad Brad did not get the lecture! I called it an early night and waited for the excitement of next day. Plus, I was not feeling great. I had started getting cold symptoms on Thursday and it was starting to get worse over the weekend. Great as if I needed another reason to worry about my race! Saturday started with breakfast. I had to get my Sherpa out of bed to accompany me to the race site. He was really hung over but I reminded him to suck it up because the rest of the weekend was about me! We got down to the race site at a fairly decent time but still missed the first part of the racers meeting. I did the packet pick-up, got some gear at the Ironman store and then went down to transition. I placed Sadie lovingly in her spot and told her to behave. I wanted to get in a swim but had to cut that out of the plan. Bad idea! But I had to get back to the hotel because the rest of my family was coming into town. By about 4p everyone is in town and we headed over for some dinner. We had a great pasta dinner with lots of great conversations. I chose to go back to the hotel and get ready for the next day while everyone else went out to party. I obsessed for some time over what should go in which bag and should I take this or not, etc. It was not pretty. However, I finally settled down and when to bed. I slept pretty good and before I knew it the alarm was going off. The first thought as I was getting out of bed, "WTF am I doing here?!" That is not good!

Race Day
We arrived earlier enough, I don't remember the exact time. However, we did not have a lot of traffic to get onto the park. We got a pretty good parking space and was quickly on the bus to the second transition area. I set up my gear in T2. Not much to do here but put out some shoes and a hat. No need for nutrition because I am not finishing the race. After that we went down to T1. I tried to look like I knew what I was doing here but really didn't have a clue. I felt completely out of place and just tried to calm my nerves. I did have a great spot in transition. I was right near the exit of T1 and very near the pros. After I set up it was time to visit the porta-potties. That took forever and I was very concerned that I would miss my 646a start time. Luckily that did not occur. I had ample time to put on my wetsuit and get in line for the swim start. 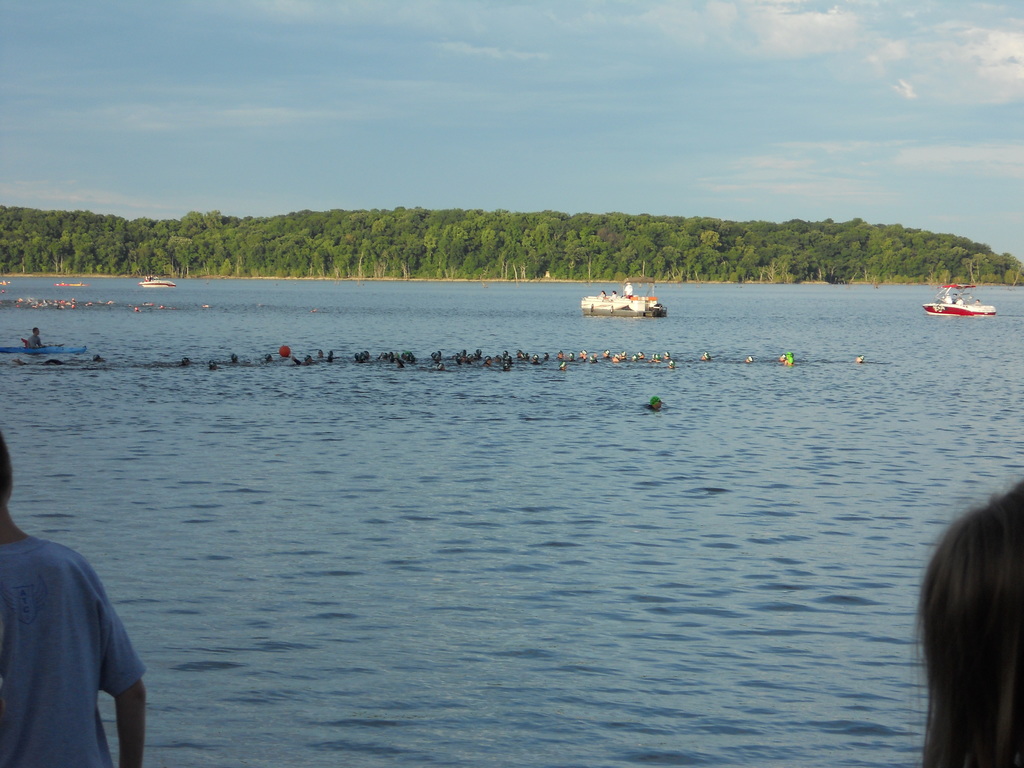 Swim:
Okay, I had some pretty good goals for my swim. I wanted to finish in about 45 mins and I wanted to try and be calm. Yea, none of that happened. Now for Kansas, you enter the water from a boat launch and then float for awhile until the race starts. I swam out the start area and tried to get to the far right and back of everyone so I could miss all of the jostling. The gun went off and my nerves broke. Yea, I panicked. I don't really know why but it is something I need to figure out. I finally pulled my self together at the half-way point and was able to get in some steady swimming.

Time: 56:44
Lessons Learned:
1. I need more OWSs so I can work on the nerves but the opportunities were not available.
2. I really need to visualize this part of the race.
3. Don't get intimidated by the other competitors! T1:
I did not have a quick transition but I was not too concerned because I was not going to finish this race. I had a great place for exiting the transition but that also meant I had to run across a lot of concrete. My feet didn't really like that. It took some time for me to get my wetsuit off but not too much. I will work on this area for sure!

<strong>Bike:</strong>
The only goal I had for the bike was to try and keep my rate at about 17 mph and again this fell apart. I expended a lot of energy during the swim with the panic attack so I was a little off to begin with. My legs did not want to cooperate so I spent the beginning of the ride trying to get into a rhythm. I finally found a somewhat acceptable speed and just concentrated on keeping it up. I passed a few people and some passed me. Overall, I was liking the course and the weather was not too hot so I was coming around. There was one small problem during the ride and that was the oil spill on the road. We had to dismount to get around it but the officials did a great job of warning us of the danger. I kept to my nutrition plan for the most part and really hammered the water. As I was coming back into T2 I saw all my family and that really propelled me on. I was starting to feel better and I had no pain in my hip. 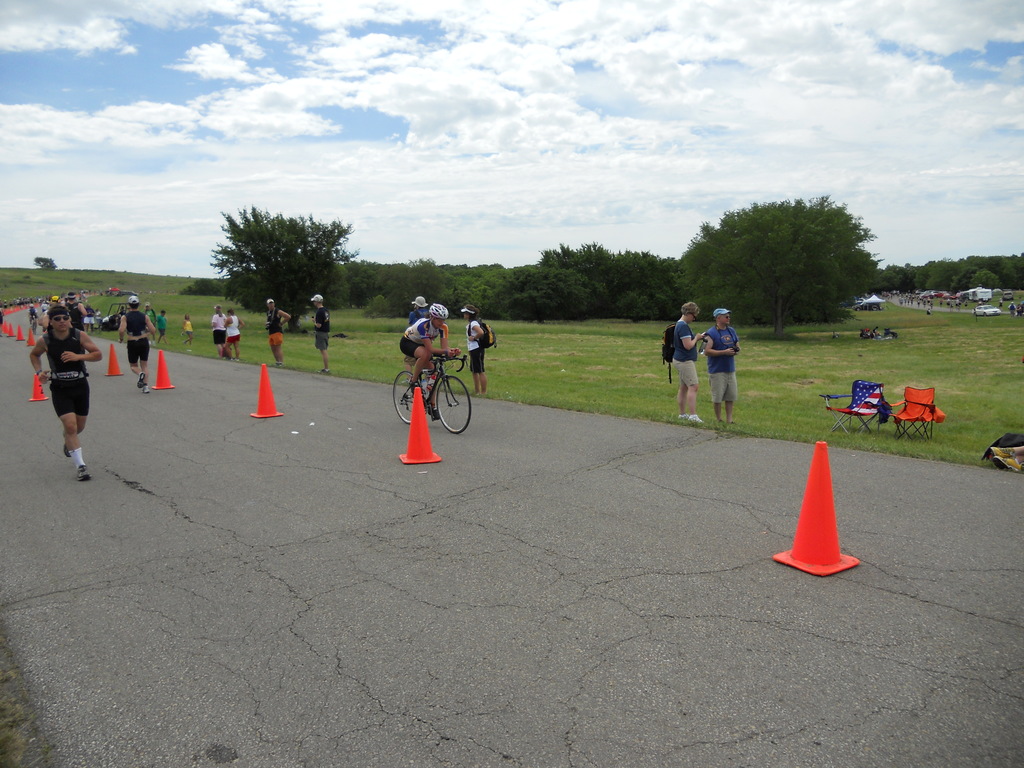 T2:
I came into T2 found my rack and placed Sadie safely away. I switched my shoes. I did not put on socks because I was just going to run out and then quit. I made my way around to the area where my family was and in an instance decided that I was not going to stop. I was going to walk the 1/2 marathon and finish come hell or high water. Nothing was going to stop me from finishing and making my family proud. FYI, my brother totally called that one. He told Brad I would not quit not with them there and he was right. Brad knew I would follow the plan but nope, the stubborn gene kicked in! 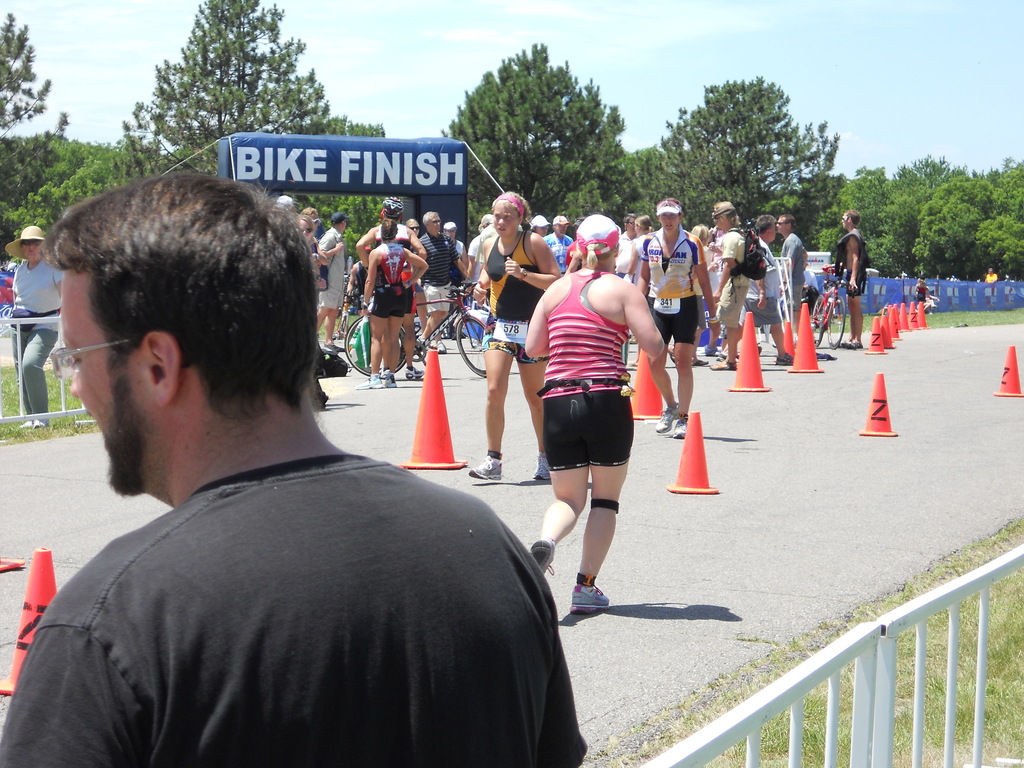 So the run was not a run but rather a walk. I did the calculations in my mind and my goal was to do 15 min miles. Goal hit on this one! Walking a 1/2 marathon is very hard mentally, especially when most of the competitors are done and going home. The best part of course was that I got a lot of personal cheering from the other competitors! I saw my friend from the tri club Nicole packing up and she said Hi! That was a definite boost! The weather was very hot at this point so I did everything I could to keep cool. I hydrated at each rest area. Around the second lap my decision to not wear socks finally kicked my ass or should I say feet. They were killing me! My left foot had a huge blister and it felt like it would just keep popping, filling up and then popping again. I was never so happy to finish. And what a finish, my brother and his girlfriend cheered me through the chute! They heaped tons of praise on me and made me feel like a rock star. Mentally though, I was completely beat up and done! I cried and swore to never do this again. I was going to blow off Branson because this was just too hard! FYI, I did not see the Wizard of Oz characters. They were long gone by the time I finished. I was met by a Navy guy and the guy who gave me my medal. 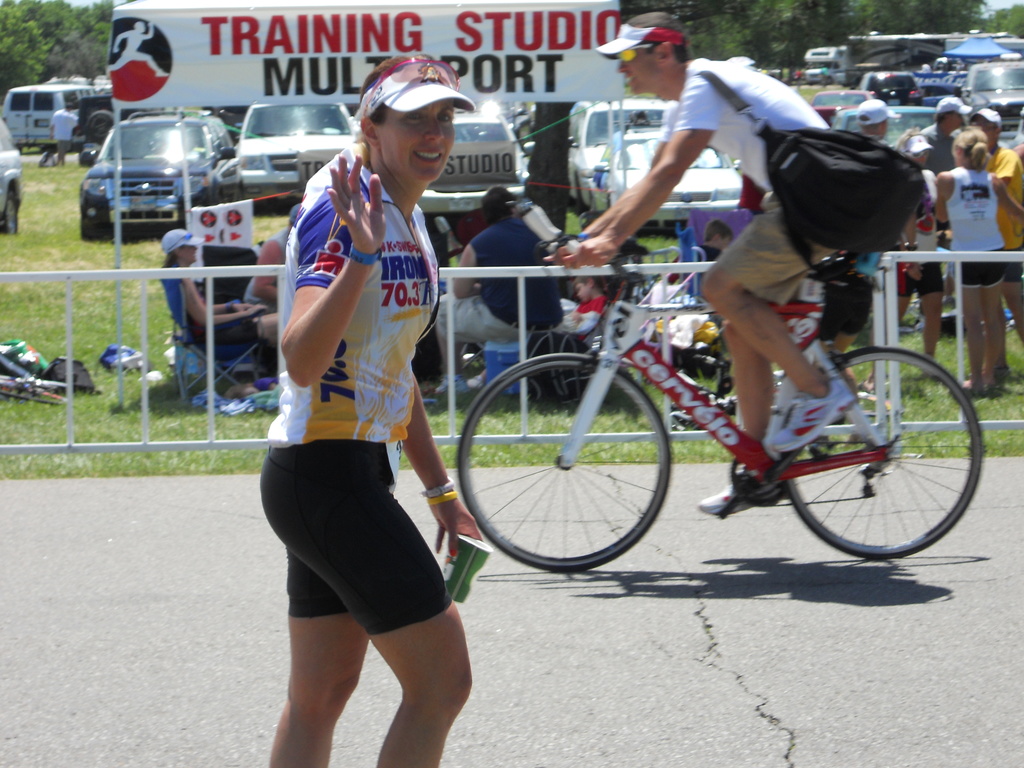 We went back to the hotel. I showered, we ate and then we hit the road for our 8.5 hr drive home. I had to get back so I could catch my plane on Monday!

Final Thoughts:
This was definitely a learning experience. I managed to do everything wrong but that is par for the course for me. However, now I know what I need to work on and what I need to change. I am happy that I finished. I accomplished something that very few people every will. Now I am ready to finish better and stronger. So my focus now is on Branson and redemption! 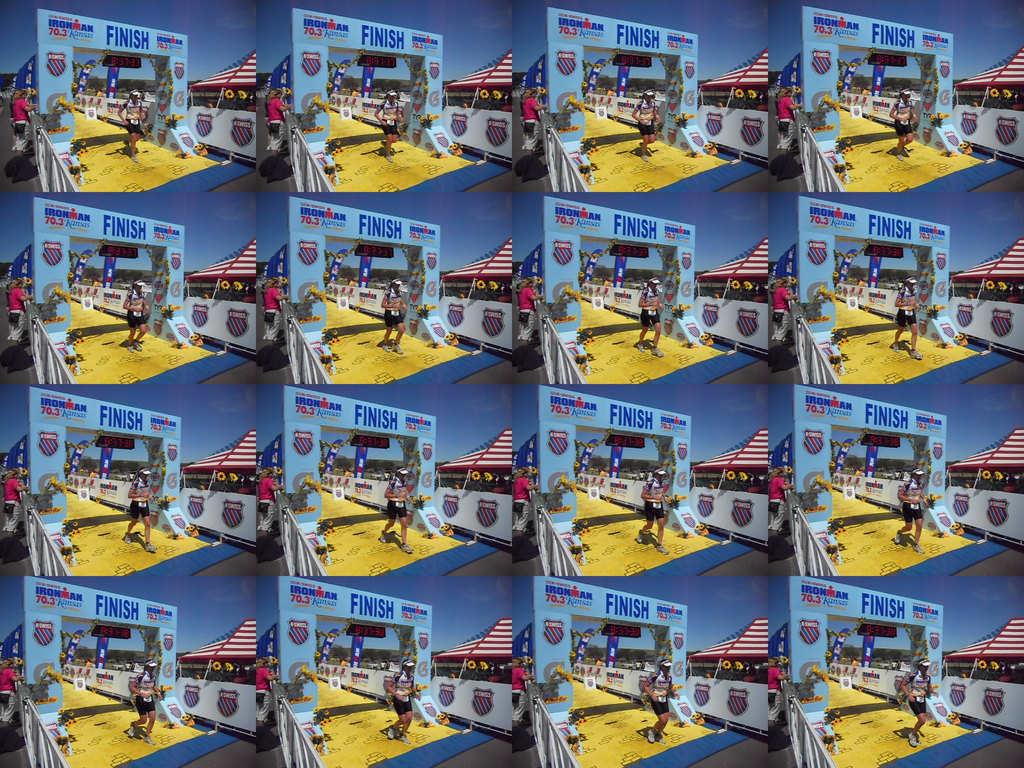 Thanks to everyone for all the positive thoughts and vibes. You guys have really helped me to recover from this hard race. FYI, I had bronchitis during the race and my hip never hurt! Go figure! Now I am recovering and hoping to start training sometime this week.

Until later keep riding, running and swimming to personal achievements!

Comment by Brian McCarrie on June 16, 2010 at 10:53am
Christi, this is great. You can train for the physical stress of a race but you never know what mental stress you will encounter. Sounds like you encountered a lot of them but overcame them all. Great job! You should be very proud. Great report too. Love the pics!

Comment by Tim Bergsten on June 16, 2010 at 10:02am
Way to go Christi...it's never too late to read a race report like this. Great photos..great info. Congrats!