RAGBRAI, Another Great Adventure In The Books!

Good Morning all! I just wanted to update everyone on my latest adventure in Iowa. The latest of which was RAGBRAI or The Register’s Annual Great Bicycle Ride Across Iowa®. Yes, you read that right. RAGBRAI is a bicycle ride across the glorious cornfield laden state of Iowa and if you think the state is flat then you are sorely mistaken! Iowa is full of glorious rolling hills and heat. In fact the saying for the week was the three “H’s,” hills, humidity and heat!

This year’s route was “…one the shortest and flattest routes ever...” The total mileage was 442 miles and as is the tradition began at the Missouri River and ended at the Mississippi River. The route changes every year but always begins and ends at the Rivers so each rider can dip their tires in the Rivers to start and end their journeys. This year we started at Sioux City, IA and ended in Dubuque, IA. 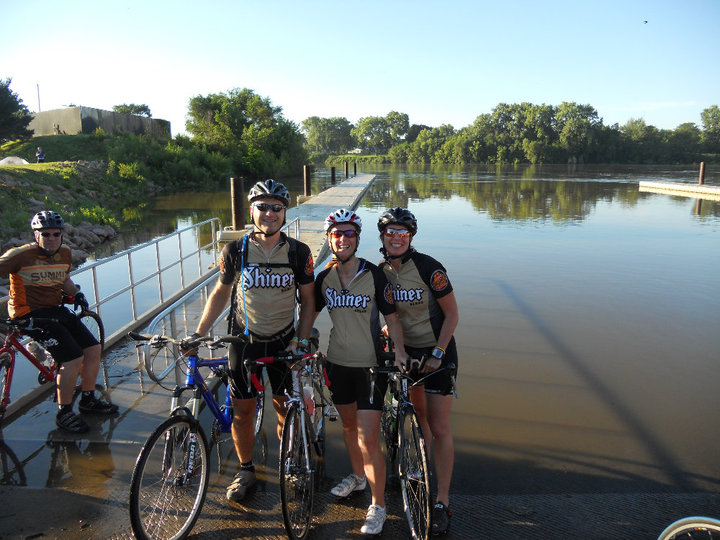 Now let me just clarify this is a ride and not a race. RAGBRAI is not like the Tour de France where groups of riders are pounding the pedals day in and day out trying to the best the other guy. Nope, RAGBRAI is more like Sturgis for bicyclists, a party through Iowa. Riders come from all walks of life and ride all types of bikes. I personally saw a unicycle, a shark-like contraption (as seen in the photo below), recumbent bikes, tandem bikes and even hand-pedaled bikes. The participants were young, old, thin and fat. There was even a paralympian in the mix. A few riders were in costumes and dyed their hair pink. Many were riding for causes but many were there for fun. A multitude of riders had done this ride for many years in a row but then many were RAGBRAI virgins like Team Shiner. 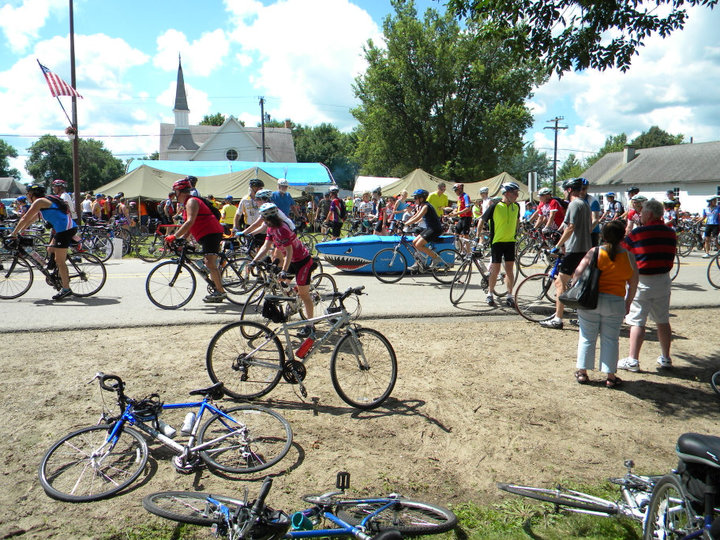 Yea, there is a guy in the shark!

The communities of Iowa wholeheartedly support this event and that was evident from the very beginning. Each town we passed through and almost every farm and community club along the way had stands to make sure that we were well fed and hydrated. We were not the least bit concerned with going hungry or bored for that matter. There were pork chops or as they call them in Iowa, Iowa chops on sticks, smoothies, beer, Bloody Marys, fruit, pancakes and well just about any thing you could ever want! The towns also made sure to provide tons of entertainment! Several towns invited local bands to play and one town even set up a crane near a pond so riders could jump in and cool off! We even spotted Elvis with a mini-me! 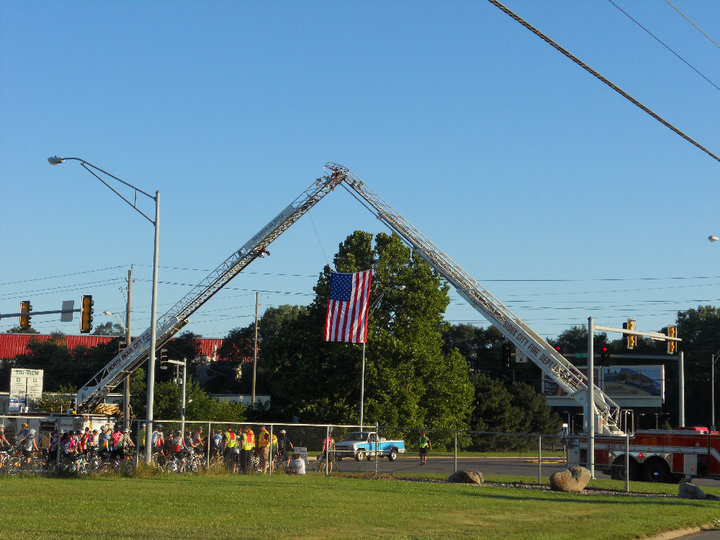 Sioux City sent us out in style. 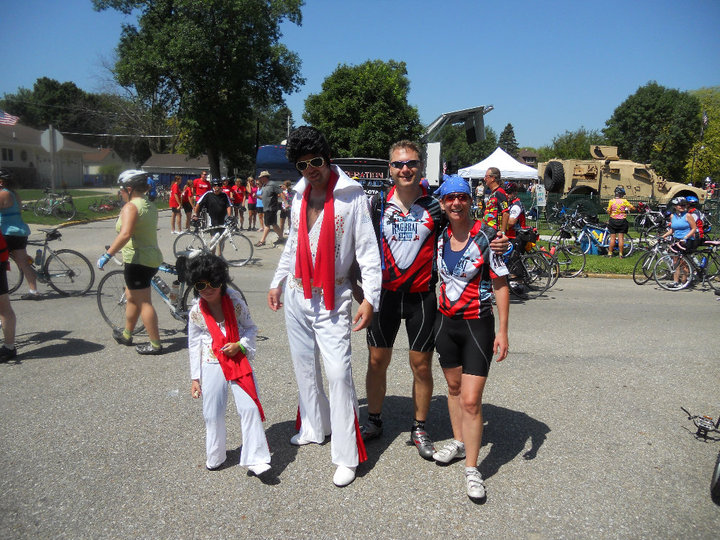 The riding was awesome though admittedly at times the scenery was a little boring. I mean if you have seen one cornfield you have seen them all. But it was certainly challenging. On average we rode about 63 miles/per day. The longest day was 82 miles and the shortest day was 47miles. And if you are wondering, yes, your bum does hurt with that much time on the saddle. You just have to suck it up and keep going. There was one tremendous hill and just to make it worth our time they put it at the end. The hill was named Potter Hill, after the farmers who owned the farm at the top. It was a mile long and had an average incline of about 9%. Now being from Colorado that is no big deal but after having ridden about 400 miles it hurt even the strongest of us. Many riders walked the hill but they were certain to yell encouragement to those of us that rode it. 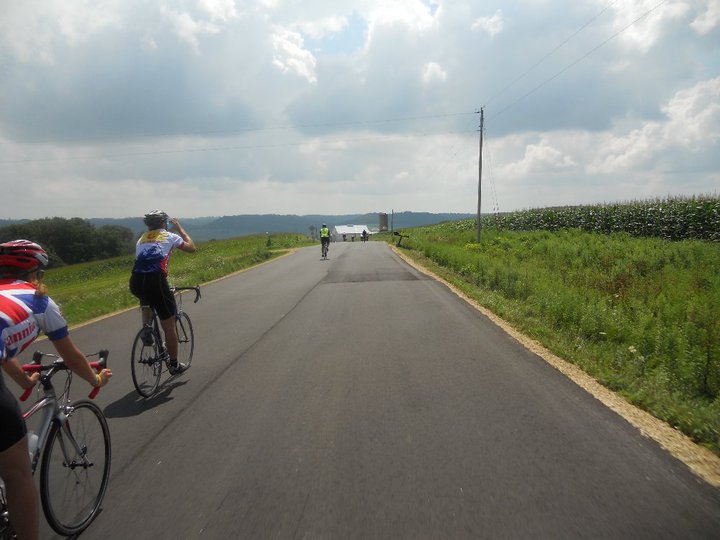 So if you are bicyclist or a soon-to-be bicyclist I would recommend that you put RAGBRAI on your bucket list! There is nothing like riding through Iowa with 10,000 of your closest friends. And friends they are because nothing brings people together like sweating and partying through a common challenge! 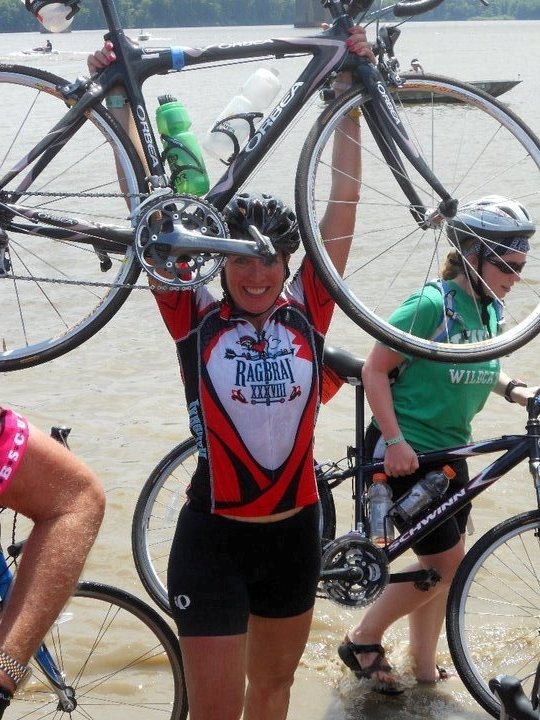 Dippin’ in the Mississippi!