Facilitating the Dreams of Others: Achilles International- Colorado Springs

Goals and dreams are powerful things.  I remember growing up, one of my first athletic aspirations was being able to juggle a soccer ball, a lot. One thousand times specifically was the number that somehow bore it's way into my head. And so for many hours on many evenings after school, I stared and stabbed at the revolving Mitre. Finally on one otherwise mundane night, under the illumination of streetlight...998, 999, 1000! I had dreamed of doing this, well probably for only a couple of months, but the sense of accomplishment was incredible! I had done something novel, something I had never done before. Who I was hadn't changed. But the perception of who I was, was much grander. When I started running ultras, the same thing happened. Covering 100 miles on foot was intriguingly incomprehensible. And, even after doing it a handful of times, it's still kind of unfathomable. But that's the beauty of big dreams, they leave you with a more expansive view of you're capabilities.

Perhaps it's a 1/3rd of a life crisis, but as I prepare to mark the beginning of a new decade, my interest in helping other's along in their personal journey has grown. "Enabling the dreams of others," as Randy Pausch called it, has begun to resonate more.  Instead of "enabling" though, I want to facilitate. In the therapy world, facilitation involves handling techniques that offer guidance or suggestions to cue the child to activate his own muscles and complete the desired movement. And movement, whether walking, running, skipping, jumping is such an incredible thing. Yes it offers physical health. But it also allows for opportunities to break down social barriers, and most importantly, a means of happiness and freedom. So in a broader sense, I'd like to do more to facilitate movement as it relates to the dreams of others.

Luckily, there already exists an organization that embodies a similar mission. Achilles International-Colorado was spearheaded by Michael Oliva who took the New York based movement west to the Rockies. In just a year's time, the program has grown so much that they now offer 3 weekly runs in and around the Greater Denver/Boulder area. Last week at the Washington Park Run, this all inclusive group of folks with visual impairments, amputations, and other potential obstacles to an active lifestyle had upwards of 65 in attendance. Here's a brief video of this amazing resource:

Michael envisions continued Achilles growth along the Front Range and we're next Colorado Springs! Yesterday evening, Brian, Zach, and I made the trip to Denver to witness the program in action. On a chilly night, we met some amazing people and ran some fast miles with Amelia, an athlete who is blind. Amelia ran the New York marathon last year and will be taking another shot at the distance this weekend at the Colfax Marathon. Her goal: sub 3:30! 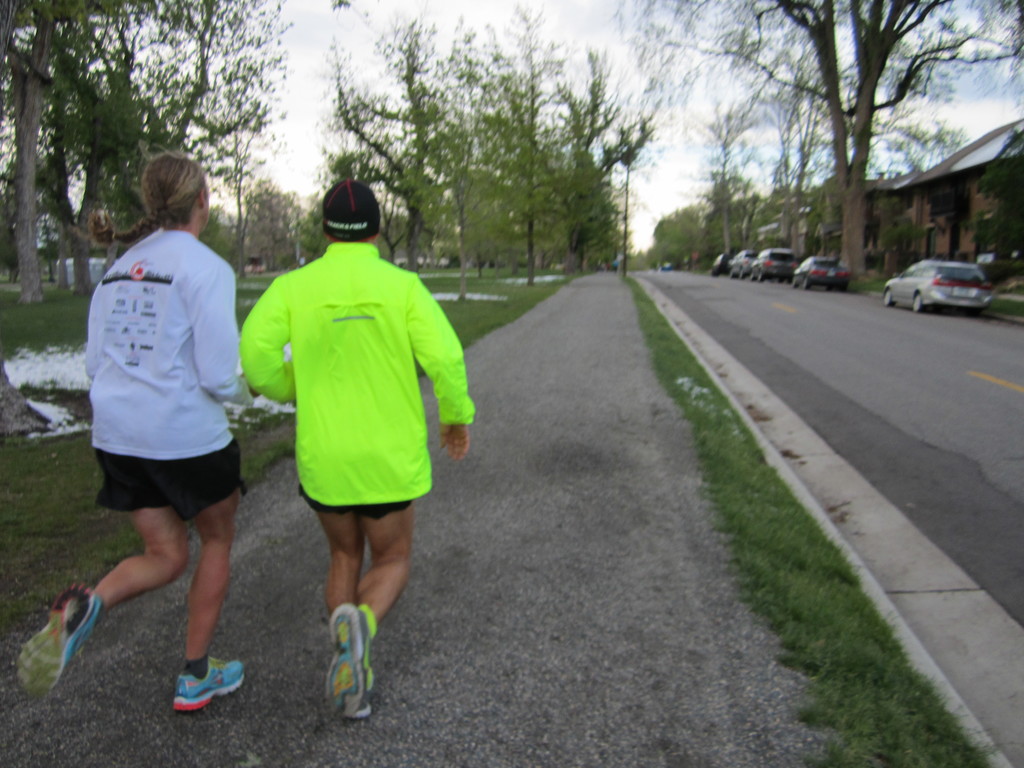 Zach and Amelia running with a tether

So beginning May 22nd, there will be recurring Achilles gatherings at Memorial Park/Prospect Lake every Thursday at 6:15. We'll plan to meet at the Swing High universally accessible playground on the south west corner of the park. The run/walk is all inclusive and people of all ages and abilities are welcome. Before the run, we'll do a meet and greet to partner folks up individually or otherwise assign groups based on goal pace. The course will consist of 1.25 mile paved loops around Prospect Lake. Participants can do as many or as few laps as their hearts desire but we'll aim for a 30-45 minute adventure. This will be a fantastic opportunity to connect with your community so if you're interested in volunteering, add a comment below. Even more importantly though, please help spread the word to people who may benefit from having a group like this to train with. After all, who doesn't like to move it?!

Can't wait to meet everyone and get Achilles off the ground in CSprings!

Looking forward to seeing you out there Kelly!

Excited to get out there and meet people from the Springs who have similar abilities as me :)

See ya there soon.

Fantastic Jaclyn and Duane!  Hope to see you there!

Comment by Duane and Jaclyn Roberson on May 13, 2014 at 8:13pm
This is awesome, Brandon! Duane has been wanting to do this for awhile, but didn't know how to connect with a program.