Last weekend, I journeyed west to race in the land of crimson canyons. A place where the rocky terrain is so cool and so hip, it goes by the name "slick." Moab and the Behind the Rocks Wilderness Area is home to a new 53+ mile race, brought to you by the folks at Grass Roots Events. I'd been to Moab only one other time and was excited to race in this incredible part of the country. While it can be a bit of a haul from the Springs, the trip is definitely worth it! 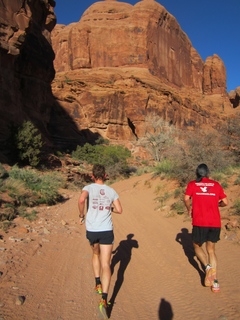 I love free dispersed camping at races. It's the ultimate convenience that allows just a little extra snooze time and a lot less rushing around in the morning. With a 7am start, the pre-dawn fog was lifting  just as the sun peered from behind the La Sals. With a lingering sourness from HURT, I made the decision to forego any gels. Various nut butter and carbohydrate drinks would instead serve as my source of calories throughout the day. Additionally, because of growing awareness of a recent compulsion to pump tunes through my external auditory meatuses, I decided to leave the iPod. I wanted to seek a different experience, choosing presence over distractions. To connect rather than disconnect from the highs and the lows, and accept them for what they are. It was a camera, but no GPS watch kind of a day and it was going to be good!

There were 17 starters for the 53+ mile race and another 30ish taking on the 50K. Both races are primarily run along desolate, backcountry jeep roads and serve as a great way to work on leg turnover. While I'm a single track aficionado at heart, I found the non-technical terrain allowed me to lift my gaze and let a little bit of Moab permeate into the soul. 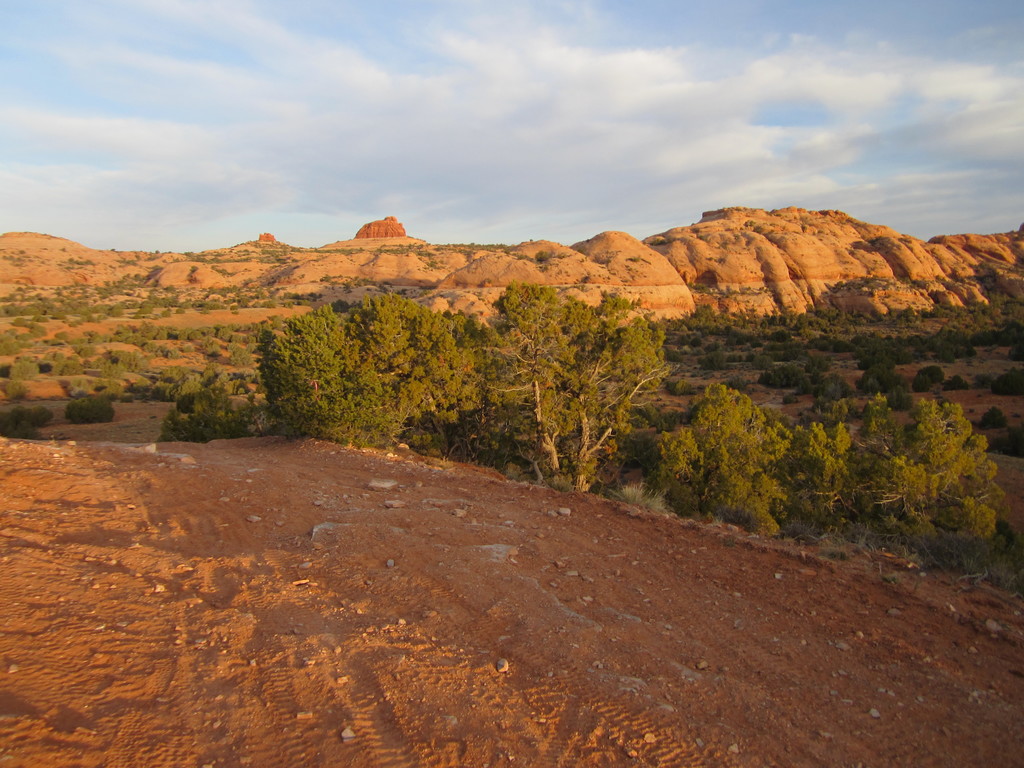 With prolonged and extensive exposure, what was once "permeating" soon became fiercely penetrating! 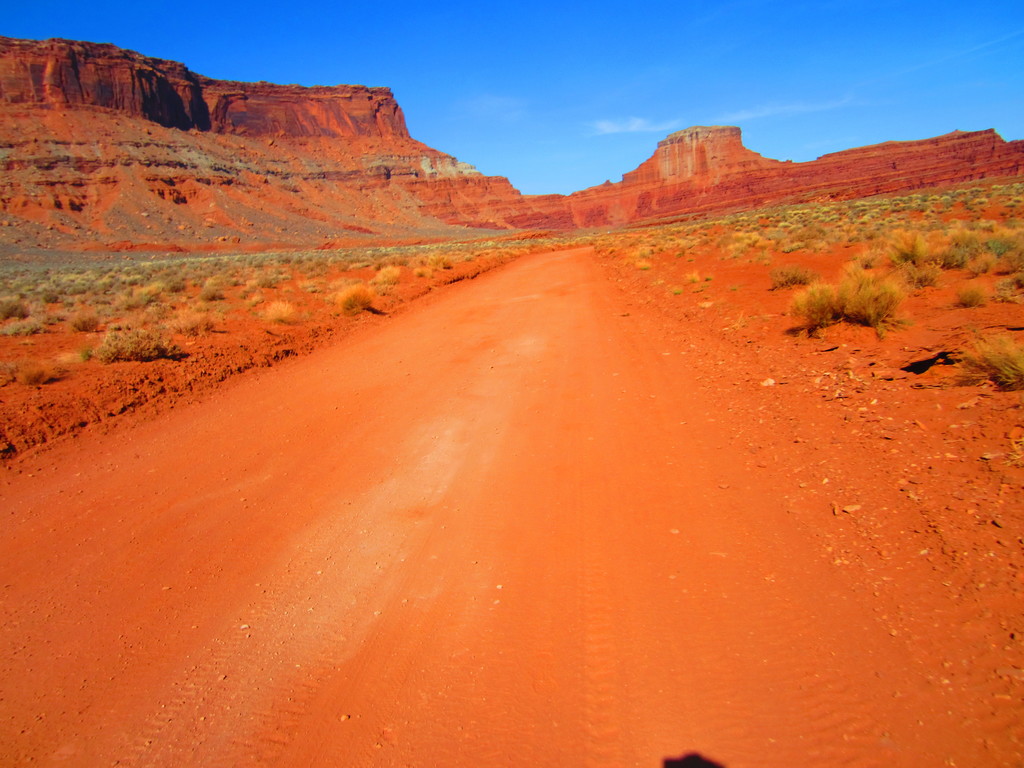 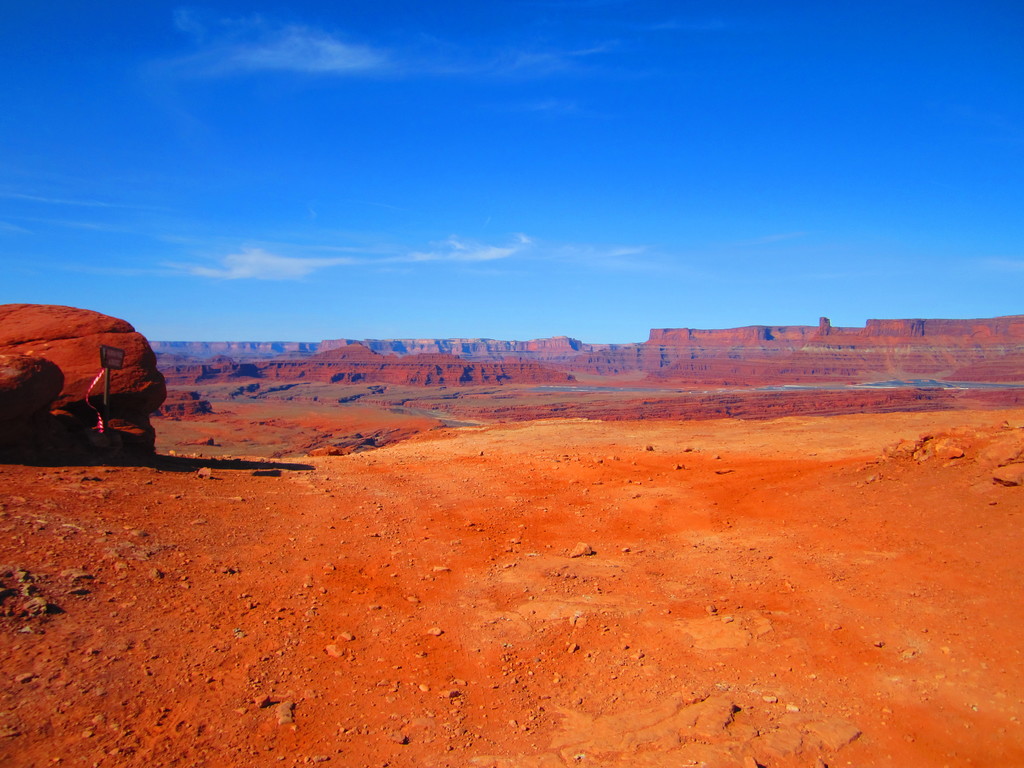 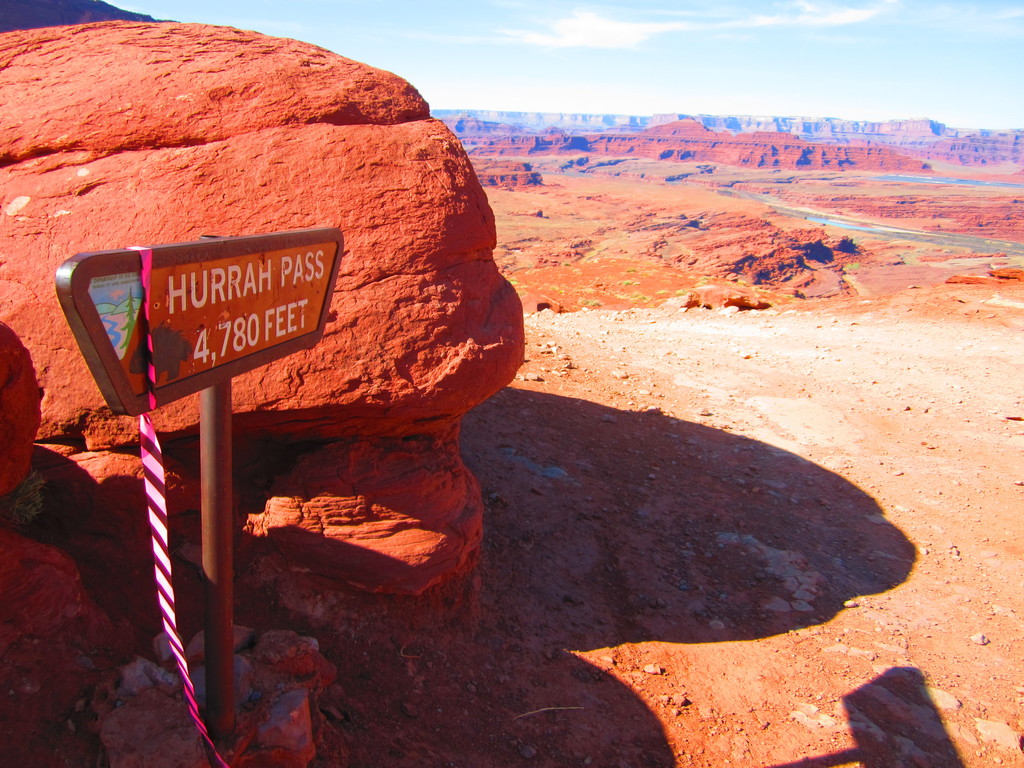 I soon learned that what's rejuvenating to the soul can sometimes wreak havoc on the body. Despite going through 2 bottles of fluids between aid stations, after 4.5 hours of running, I still didn't have the urge to pee. Eventually, with a little positive self talk, I forced myself into making it happen. While the results were expected, the were far from pleasing. Brown makes a fine uniform color for UPS, but its an unfortunate shade of urine. Of course, after cognitively confirming my suspected misgivings, the body began to hurt more and more.

Fortunately, it wasn't much further to the next aid station where Justin Ricks, one of the race directors, was stationed. He asked what I needed but couldn't deliver on my request for new kidneys. Streetfighter Vega, who had started strong, was also struggling. With a net downhill to this point, I found that the term "sneaky hard" was most appropriate when describing the course. We were at aid station 5 of 7 and the return home began with a gnarly grind up Jacob's ladder. At least the soul was still happy! 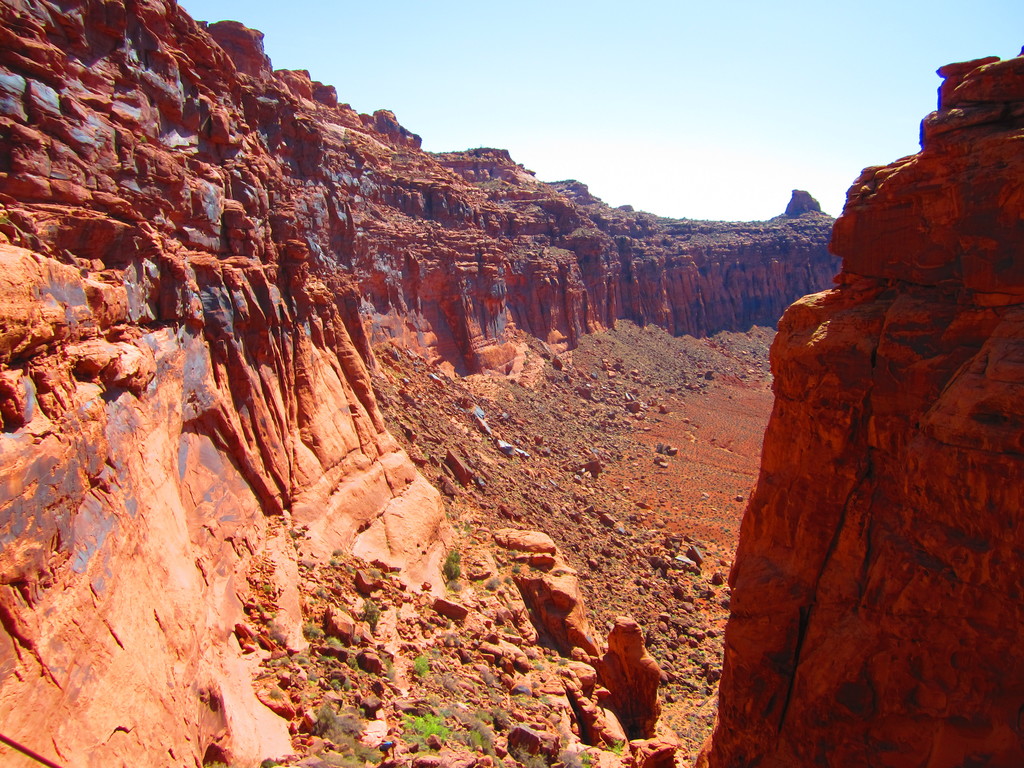 The higher I climbed, the worse I felt. Leg cramps were frequent and, even after reaching the rim, hiking was about all I could muster. Despite being in a dark place physically and not doing well from a "racing" standpoint, somehow this was exactly what I had wanted. To feel alive, with all that the gift of being sentient entails.  George Sheehan describes what I was going through in Running and Being. Rather than enjoying flow and the elation that comes with effortless running, I was grinding. This was not offense, but defense, yet it was just as rewarding. 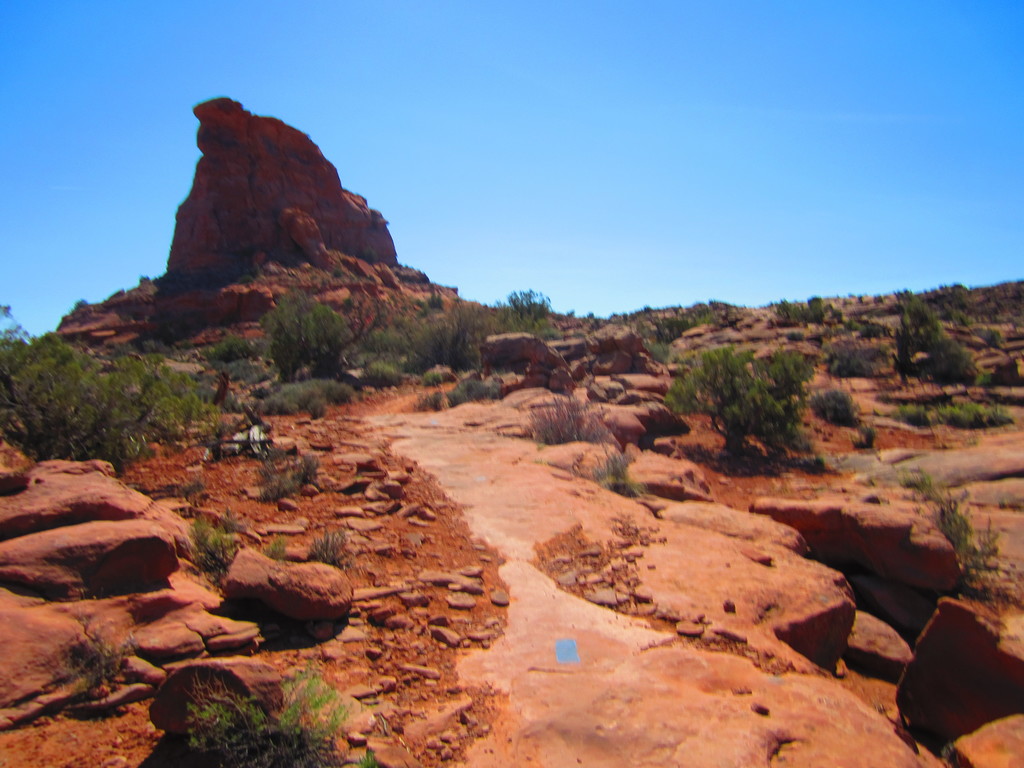 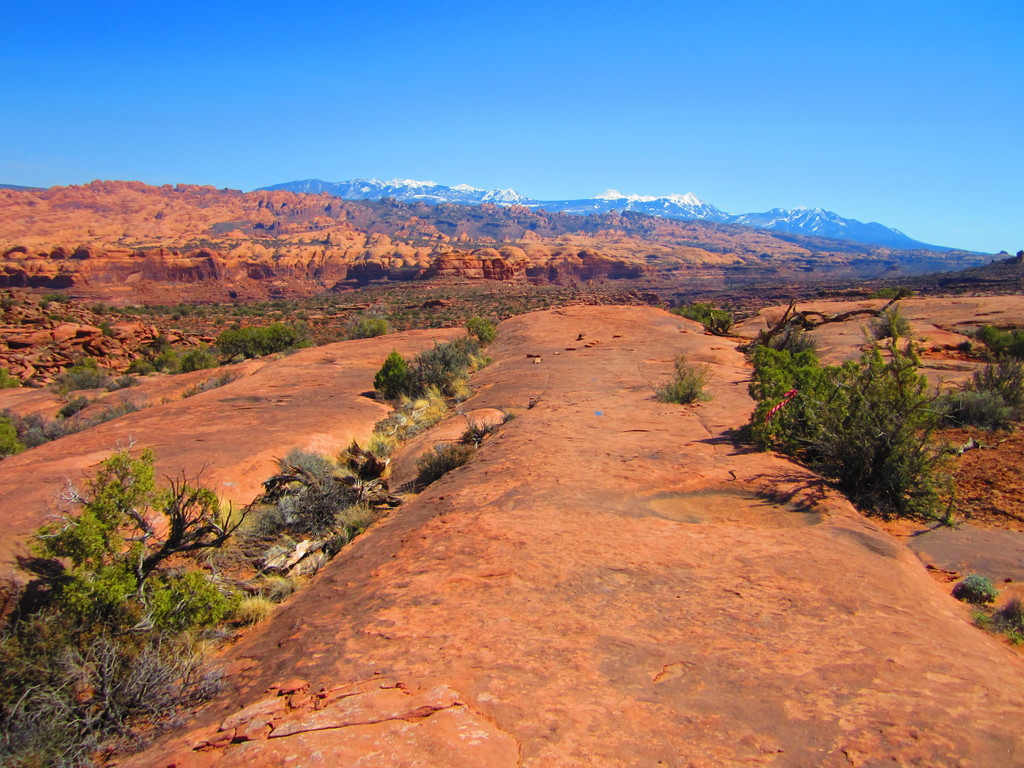 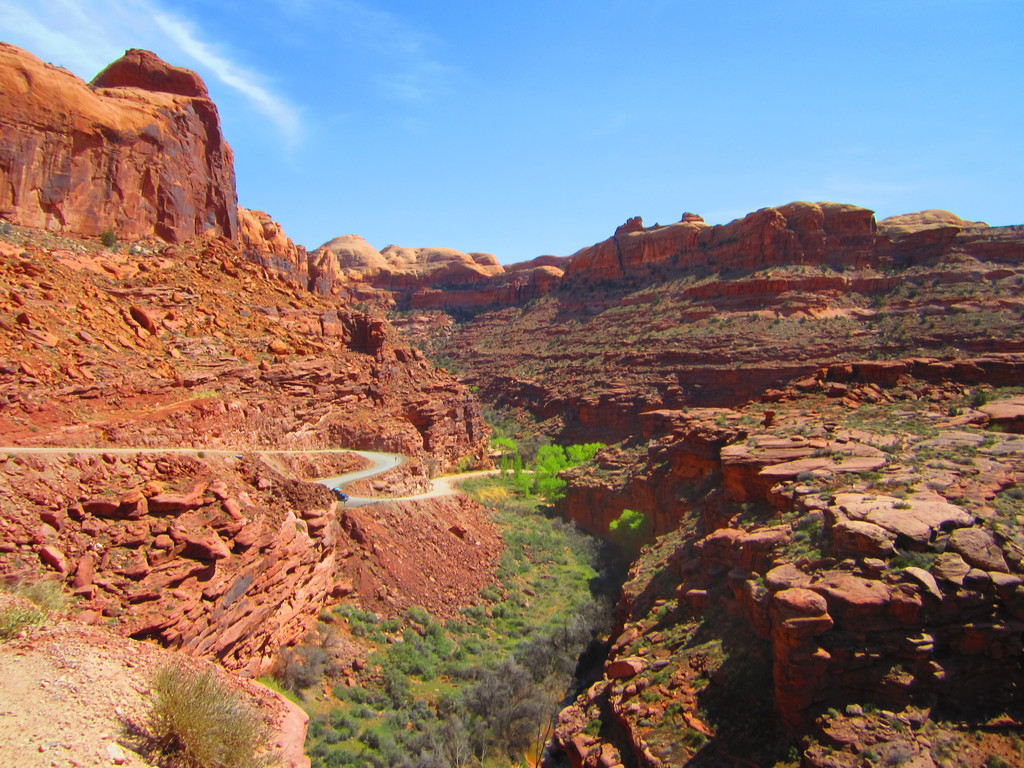 As Dan and I were both struggling, we decided to finish the run together.  We met Peter at the next aid station and briefly enjoyed the one spot of shade on the course. 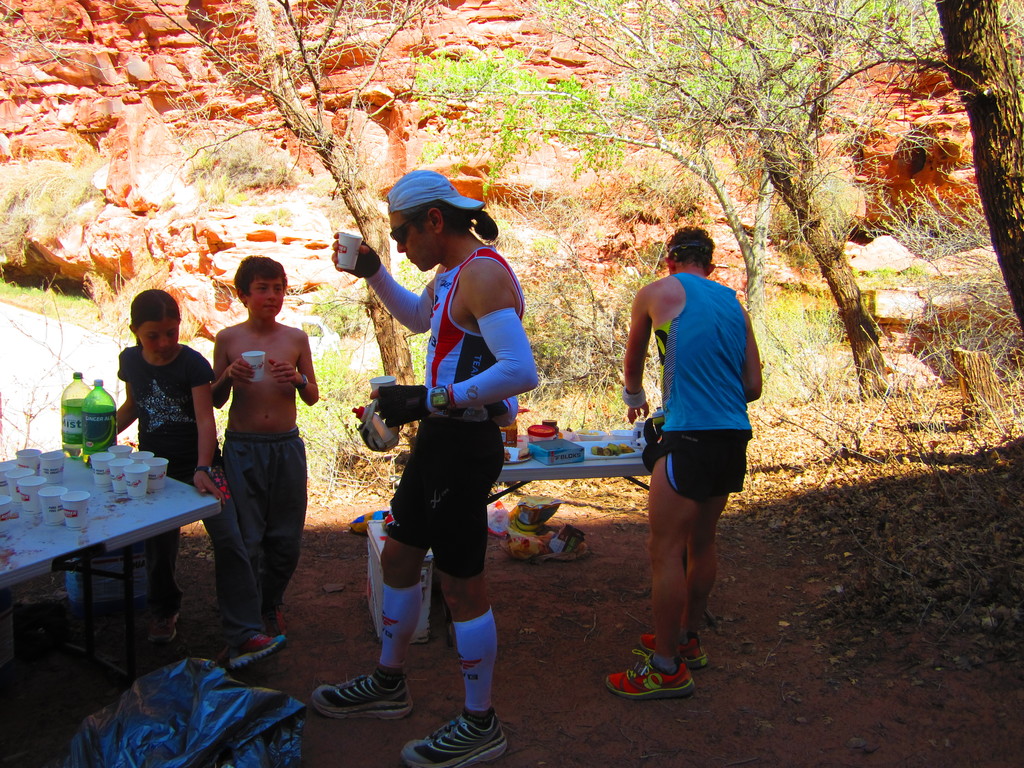 Dan and I along with some kids selling lemonade! 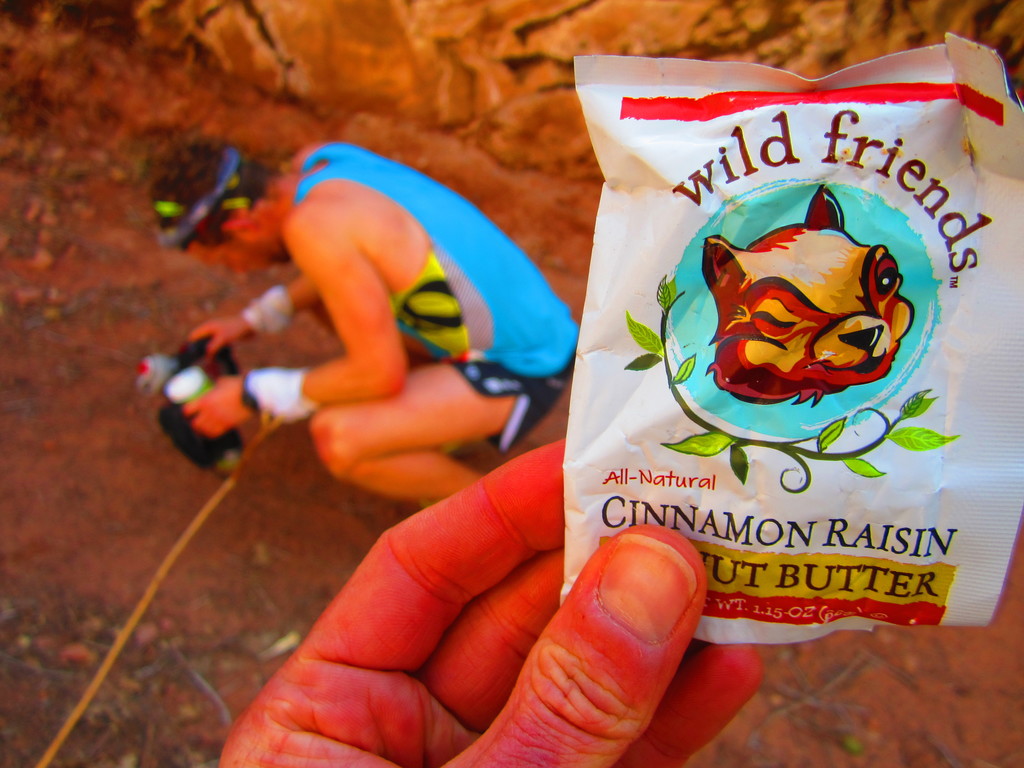 There was one more aid station before the finish, and things would continue in the same manner. More often than not, Dan would wait for me to hobble along, but the roles were interchangeable. After 10 hours and 30 minutes, we ultimately finished 4th and 5th overall. There were reports of the course being a little long (57 miles) and some issues with trail markings but all in all, things were executed well, especially for a first year event. While I found it "sneaky hard," I can see the Behind the Rocks 53+ as a great tune up for Western States. It has the plenty of heat and gradual downhill to get you primed for the trek from Squaw Valley to Auburn.

When people have asked about how things went, I've told them that it was a bad race but a great run. In actuality, it may have been more of a Spirit Walk than anything. An affirmation for why I (and most of us) do these things. Not for money, or awards, or accolades. Even the quest for PR's is rarely motivating. I run because it makes me feel like I've lived a lifetime in a day. It teaches me to appreciate simply living and to never let the sun catch you cryin'!

"Deadweight" from Beck Hansen on Vimeo.

Brandon - great write-up; sounds like you may have been really pushing some limits there tho. Check out this article when you get a chance... http://www.ultrarunning.com/features/running-rhabdomyolosis-and-ren...