2015 ended rather roughly in a "first world problem" sense. After spending some quality time with family in North Carolina and Virginia over the holidays, I found myself emotionally rejuvenated but also filled with nostalgia. Though sentimental, this of course wasn't the bad part. The bad part came during my return trip to Colorado.

Hours into the trip, in my emotionally full state, I found myself somewhere in Tennessee with an empty tank of gas and without my wallet. My faux leather companion was, I discovered,  still back in North Carolina. After futile attempts to recite my credit card number and after having my personal checks denied without identification, I was embarrassingly proud of the fact that I was able to to excavate an even $13 dollars in nickels, dimes, and quarters from the dog hair laden creases of my car. Like tokens in an arcade, these coins would earn me just enough gas to return to NC. I was going to make it!

Relief lasted ever so briefly though, as during the eastward detour on a westbound trip, I was pulled over for speeding. Still without my wallet, I didn't argue with the officer, but incredulously held that my cruise control was set to only 5 mph over the posted speed. Fortunately for me, the officer took pity on having to witness a grown man on the verge of weeping and I was released with just a warning.

Still on edge from the events of the day, I eventually reunited with my precious container of currency and plastic in Asheville before about-facing to resume the journey west. After a 21 hour, turned 26 hour drive, I finally made it back to Manitou Springs without any further hiccups. That is, except for the fact that when I got home, I learned I had a busted water meter and frozen pipes.

The cross country drive and accompanying comedy of errors were frustratingly laughable, but I think they reflected a chaotic mindset that had gone unrecognized.  The reality of this set in as I began to settle into my normal routine again, turning to yoga and trail running for solace.

It was while collapsing into a child's pose one day, when the instructor told us to "lengthen our breaths, to slowly, to "Inhale...Pause...Exhale" that I began to gain perspective. Though I've been breathing, well, all my life, I'd always thought of respiration as pretty straight forward stuff. A two part process consisting of inhalation and exhalation. Breathe in, breathe out. Simple. Yet this concept of pausing, snuck in and sandwiched right in the middle of the sequence, seemed oddly profound.

As I contorted and flowed within the heated, tea tree scented studio, the theme of mindful breathing continued to percolate through my head. I discovered that in the context of the changing year, the notion of "pausing" now seemed incredibly relevant. Inhaling was 2015. Not "so 2015" in the condescending sense. It was 2015.  All the good. All the bad. All the everything. Pausing represented holding on to it so that I could acknowledge and appreciate every bit of it, but only for a moment. In exhaling, I was letting it all go, preparing to breath in a new year.

In the days that followed, I took the lessons learned on the yoga mat and brought them to the trails. I focused on "enjoyment runs." Indulgent, unscripted outings where the route was determined along the way, well after leaving my front door. I made sure that I took time to pause along the way. I made sure that I took time stop, to sit even. To appreciate the crispness of the evening. To soak in the cascade of warm colors as they gave way to cooler hues as the sun set behind Pikes Peak. In the quiet and in the stillness, I found peace. 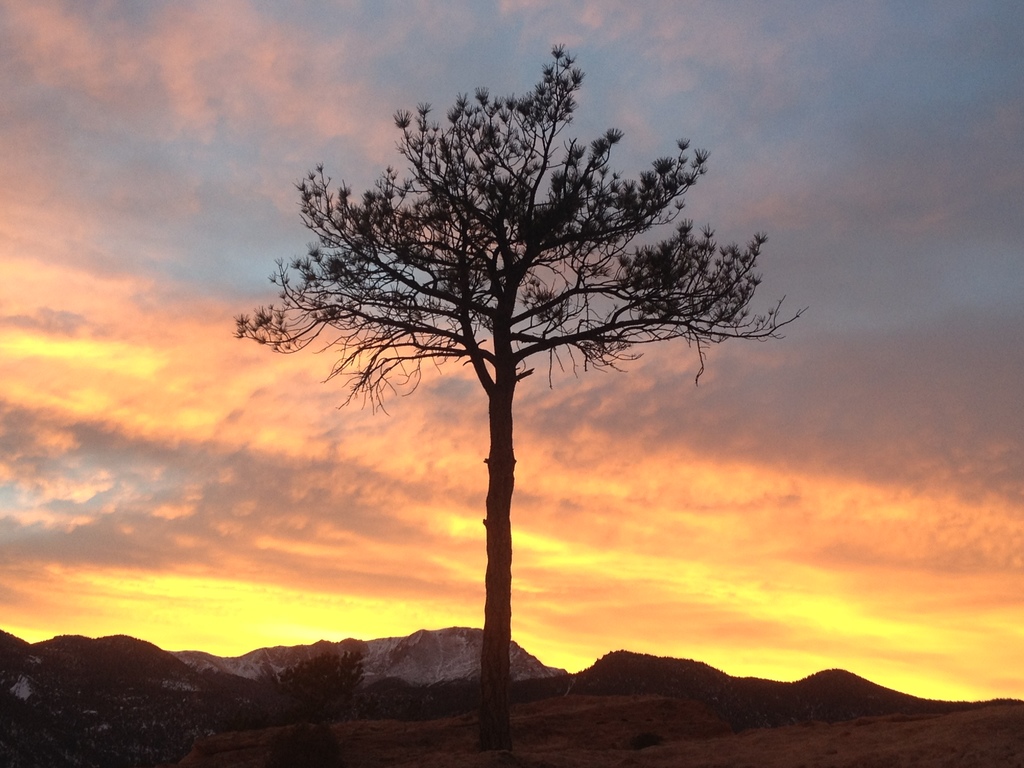 While I was certainly excited about the new year, my mid-run reflections allowed me to acknowledge a hidden, undermining pressure to one-up myself. I was frustrated with the fact that any particular races were eluding my interest and that I was floundering to come up with creative alternatives. With time though, I gained greater clarity, and I realized that while continued self improvement is generally a good thing, any excessive anxiety I was experiencing was entirely self imposed.

Looking back on the past 12 months I'm proud of the fact that I settled into a new job, made time to visit family, and did some good in the community as Achilles Pikes Peak continues to grow. I also enjoyed a full year of injury free running and capped it all off with my first international race guiding experience. Without a doubt, 2015 was a great year. But 2016 will be great as well. And rather than worrying about whether my experiences will outdo those of yesteryear, I'm simply excited about the opportunity for newness. New adventures, new challenges, new hope, and new stories. The anxiety that once resided with my uncertainty has been supplanted by excitement.

With this perspective, I've realized that while eventful, my return trip to Colorado wasn't a bad thing. It was just another experience. An experience that led to a story to tell. In the year ahead, I'll be writing once a month in exchange for local race entries to explore the meaning of Pikes Peak Sports. Some of my experiences will be scripted, but chances are, those most memorable will not. Perhaps I'll jump into burro racing or train my dog, Charlie Brown, to be a world class high jumper. Maybe I'll do another stair race, embark on a bipedal trek across Colorado, or climb one of the Pikes Peak couloirs. I may be the MVP of the Brewers' Cup or revisit the Stank. Whether orchestrated or spontaneous though, I want to remember to pause, to breathe, and to truly appreciate all the twists and turns that life brings. I want to be mindful and to pay attention. Because within it all, there lies a great story.

So agreed on the yoga for Duane!!! You guys should go have a yoga bro date. Just keep it simple (and not hot yoga!)

Thanks Duane and Jaclyn. We need to get Duane into the yoga scene!

That was fantastic, Brandon! Thanks for a great read!

Thanks Carson and Tom. Glad you enjoyed it!

Brandon you captured it perfectly. Too many times I find myself so focused on what I "have to" do next that I never stop to enjoy what I done, where I've been and the friends I've seen and made along the way.