This Is (Not Quite) Sparta! 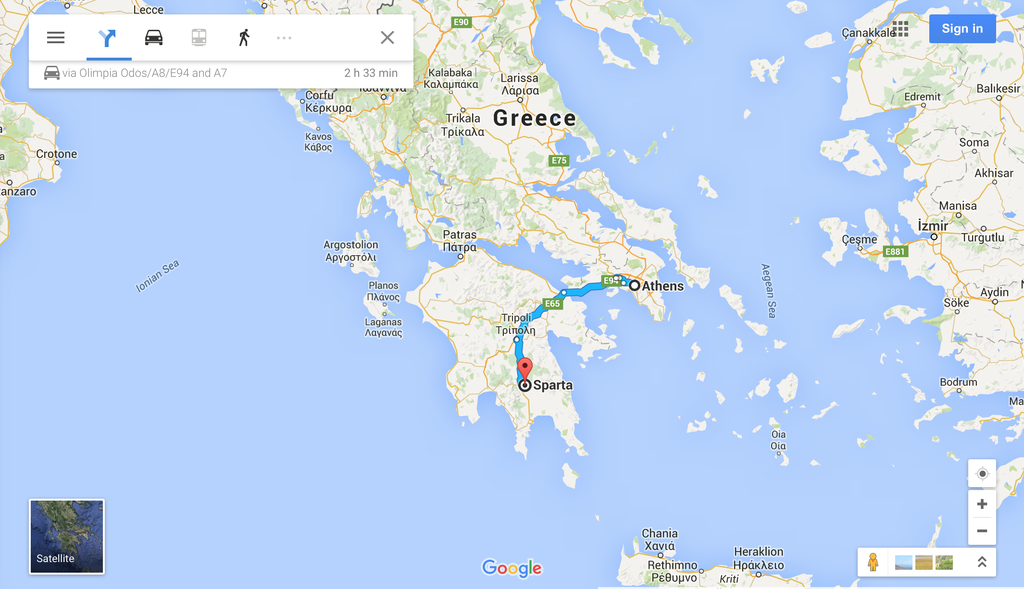 I met Jason several years ago while volunteering at the Cheyenne Mountain 50k. At the time, I had no inkling of his visual impairment. He was just a fellow runner from Denver who complimented me on my Leadville 100 finish. Fast forward four or five years with little correspondence in between. One evening in December while perusing social media, I catch wind that Jason is organizing a solo 100 mile run around Washington Park in Denver to raise funds for the Anchor Center for the Blind. I also learn that Jason has retinitis pigmentosa, a diagnosis he was given as a teenager that guarantees progressive visual loss. That night, I, along with several of the local Achilles Pikes Peak faithful piled into a car and offered Jason support and a few miles of company.

What began years ago as night blindness has progressed to poor visual acuity within a field that Jason describes as "looking through two straws." His vision has deteriorated to the point where he no longer drives and is legally blind. Still, as we stand at the starting line, his current focus, just like everyone else around him, is on what he can't quite see. He's focused on reaching Sparta before tomorrow night.

The tether system between us consists of a bungee cord system Jason constructed. Runner and guide each don a simple adjustable waist loop that are adjoined via metal lobster clasp to allow for hands free running. An additional strip of reflective tape between the connecting tails helps increase visibility. We tested the system once before on a night run up to Barr Camp and decided that it would suffice. 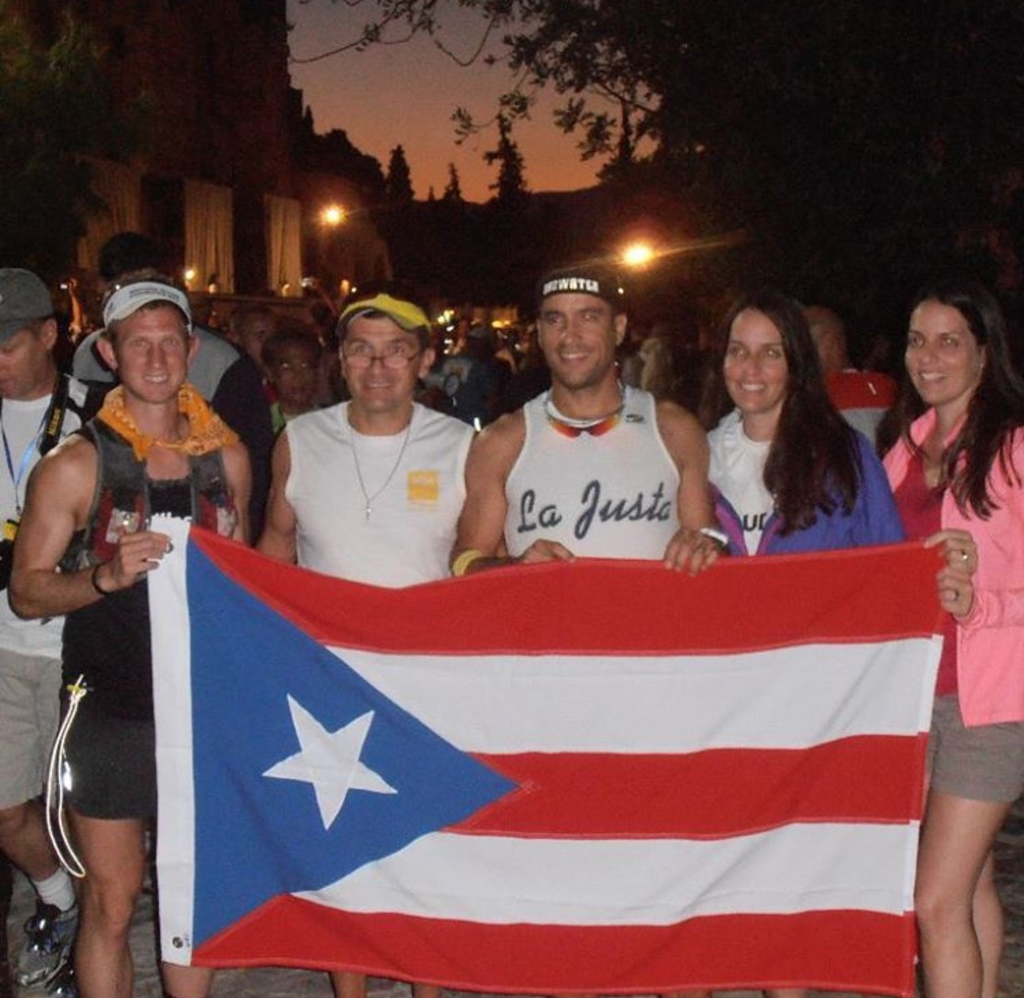 Myself, Jason, and our friends from Team Puerto Rico (Luigi, Glenda, and Gladys) at the start.

The journey to Sparta began with a gentle stampede. Because of the high concentration of runners, Jason suggested that we hold the tether for more controlled guiding for the first quarter mile. As planned, when we had sufficient space, Jason settled in and began leading our duo so that he could more fluidly set his pace. His sight, though limited, is sufficient enough to allow him navigate most daytime scenarios. High contrast lines on the road served as visual guides for him to follow, a strategy that he refined while running Badwater earlier in the year. With his limited visual field however, my assistance early in the race came in spotting appropriate off-road bathroom locales and assisting with aid station exchanges where it was difficult to see what was being offered. Additionally, with the route following busy roads, the race organization required Jason to be tethered to a guide for the entire race. 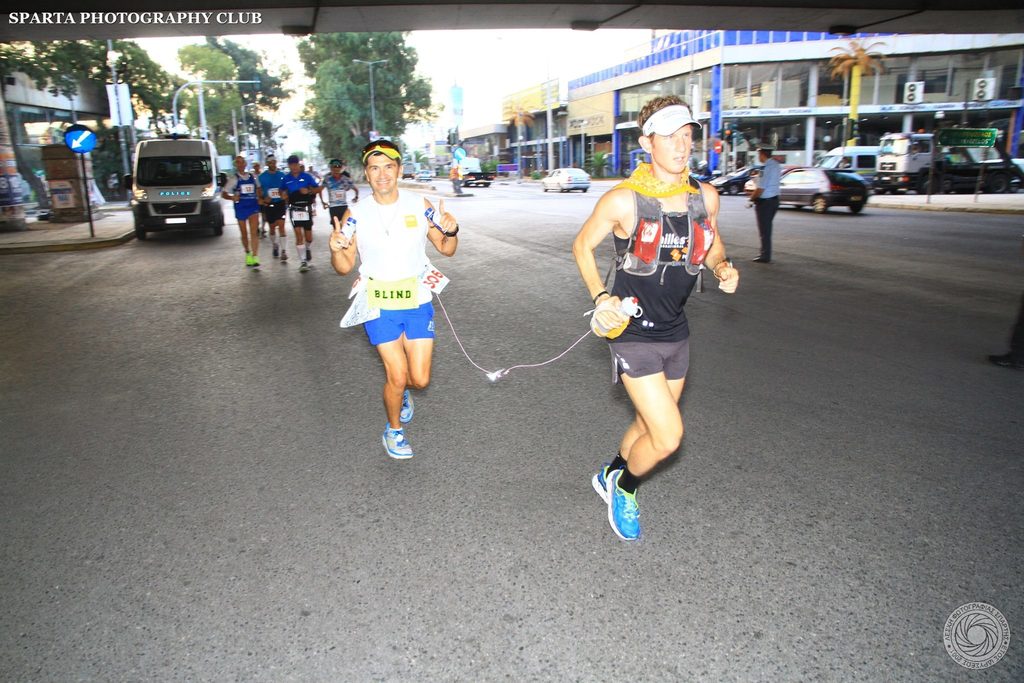 Before committing to guide, I knew very little of Spartathlon. The race is inspired by the tale of Pheidippides who made the trek from Athens to Sparta to ask for assistance against the Persian army in the Battle of Marathon in 490 B.C. The route contains around 14,000 ft of climbing with all but a couple miles being paved. Along the way, runners are chased by strict cut off times and are required to complete the first 50 miles in less than nine and a half hours with still another 100 miles to go.  Concerned about the pace required, Jason meticulously prepared a race plan with detailed splits to get us to the finish.

The course, beginning in the center of Athens, wanders through the industrial outskirts, tags the Aegean coastline, and ventures through beautiful countrysides of olive and orange orchards. It takes runners over Sangas pass (3,608 ft), and rolls over the plains of Tripolis, and finally into the town of Sparta where the statue of Kind Leonidas stands, waiting for runners to lay a smooch on his toes. 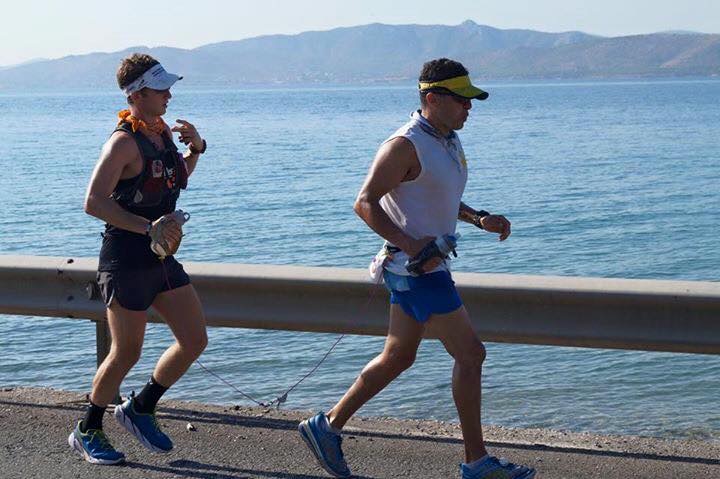 Over the course of the first marathon and even the first 50 miles, we nailed the 9:30-10:00 minute miles that Jason intended. This left us with a comfortable, but not too comfortable 45 minute buffer from the cut offs with one third of the race completed. In retrospect though, I think the 50 mile mark was one of the first turning points of the race.

It was now late afternoon and our walking breaks were becoming more frequent, though not for any obvious reason, other than having already run for 10+ hours. Up to that point, I had successfully denied any jet lag but could feel the sleep demons catching up with me. Arriving less than 24 hours before the start was not a wise strategy and my head was becoming foggy.

In this somewhat compromised state, I began to appreciate how difficult the nuances of guiding could be. There's a reason they cut the umbilical cord at birth. Things become a lot more difficult when you're attached to another person! I found that the role required constant attention to my friend, even when running behind. A step too late created excessive tension on the tether causing Jason to work harder to maintain his pace. Too quick and the tether would slacken and fall to the ground, interfering with his stride as his leg prepared to swing forward. Though I had some guiding experience, guiding for this duration and under these conditions was a completely new undertaking. 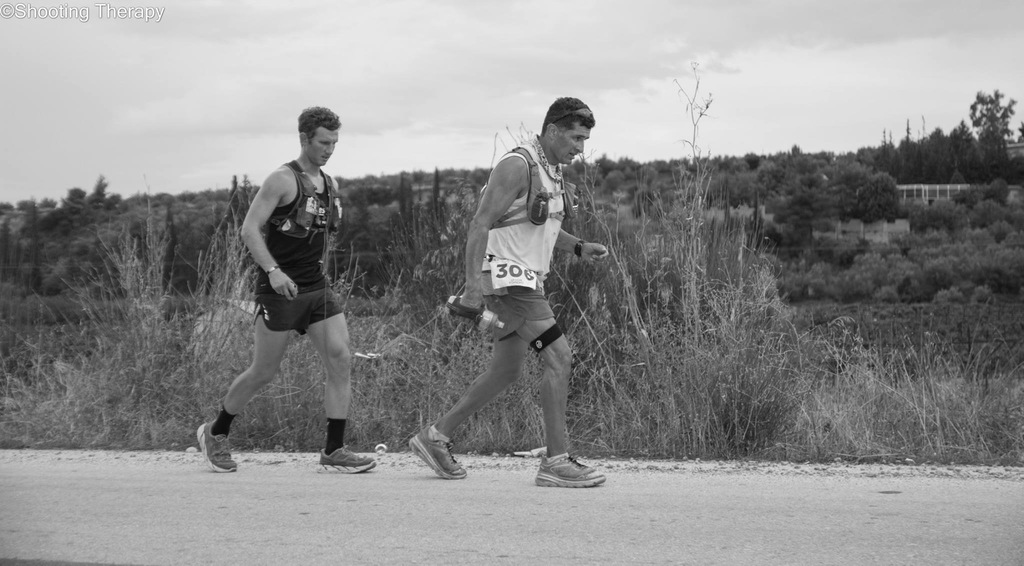 Another challenge presented itself when nature called. Under the imperfect vail of dusk, Jason found that his stomach had turned. Several times he asked me to lead him to a place off the road to fertilize the soil. To be fair, I also had business to attend to, which created more stops and more time suck vortexes that we hadn't anticipated when planning to run as a duo.

As we journeyed through the night, we switched roles so that I was now attending to the nuanced tension of the tether from the front. We walked when Jason said "walk" and we ran when he said "run." Unfortunately, the change in roles did little to change our circumstance as we continued to leak time.

At each aid station, we became acutely aware of just how much time were were hemorrhaging. Spaced every two or three miles, each stop had specific cut off times posted which provided useful information, for sure, but also a source of stress for me. I'm very much a big picture person and attention to detail isn't a strong suit of mine, especially when it comes to running. But Jason, for good reason, wanted to know how we were doing and whether we were on track for the plan he created. As the hours went on, we witnessed our buffer continue to dwindle. Slowly at first by a only a minute or two. But then by larger chunks. A sense of desperation became palpable. Jason worked to stage a few mini surges here and there, even on the uphills, but his efforts were never sustained for long enough to build back the time that was lost.

Now, as we approached the wee hours of the morning, I began seeing more and more runners, sitting or lying down at the aid stations and in no hurry to continue. They had acquiesced to their eventual fate and were no longer motivated to continue. At first, I tried my best to ignore it, as the sense of hopelessness can be quite contagious when you are at your most vulnerable. But we weren't removed from the situation and we couldn't escape from the weariness that surrounded us. We were a part of it.  While I gathered food and refilled bottles for us, Jason would lie down and close his eyes for a bit. After a minute or two, I'd shake him awake. Perhaps I wasn't pushing him out as quickly as I should have, but honestly, I was fading as well.

At his emotional nadir, Jason expressed some pretty raw feelings that I was not prepared to handle. He lamented about going completely blind and worried that climbing the mountain in the middle of the night was contradictory to being a responsible father. Not sure how to respond, instead of shifting his focus back to running and pulling him out of the funk though, I found myself wanting to console and to make him feel better. I wanted to stop the suffering. I tried to convince him that no matter the result of the race, he was already inspiring so many. So many volunteers at the aid stations. So many runners offering "respect" in the darkness of night. These things were true, but it didn't help us run faster. In the still dark hours of the morning, as the rain now began to fall, so too did our spirits.

Reaching mile 97, we had 1 minute before the aid station closed instead of the 60 minutes that Jason had planned. The outcome was beginning to seem inevitable. But, this was Jason's race and I was not going to be the one to make the decision to stop. We chose to push on to the 100 mile mark, at which point we would then reassess our life decisions. We walked for nearly all of the road climb to the base of the trail up Sangas Pass. After reaching the aid station, my watch indicated our mileage was just short of 100 and we decided to run, uphill and off course, past the turn for the mountain. To any witnesses, we were obviously physically capable of continuing. The aid station volunteers would not have ended our race as they waved on several folks who had arrived just after us. But instead of climbing the mountain to the complete the final 53 miles, after 22 hours of running, we made the decision to stop and collapsed into a couple of chairs. We chose to get out of the rain, and out of the suffering. 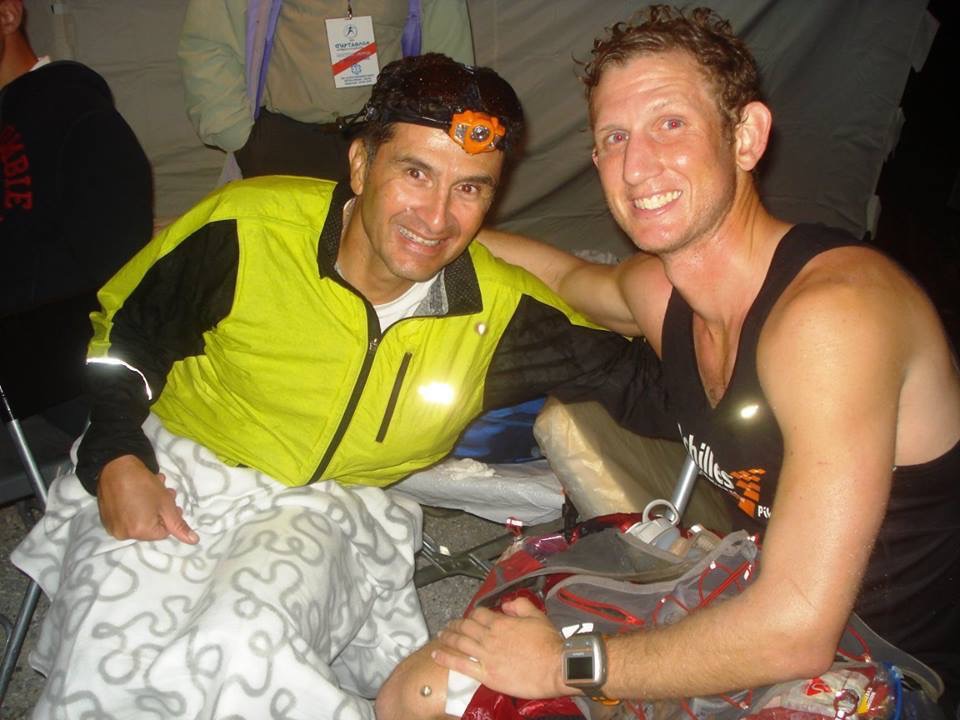 Details of the remaining darkness and much of that second day are very much a blur, aside from the fact that we were bussed to Sparta, slept in a hotel, and had a couple of meals before wandering down to the finish line to watch the final finishers come in. While we, along with the wonderful people of Sparta, cheered for the runners coming in, I recognized the shuffle from several of the last finishers. They were the same shufflers that had been around us just before we decided to end our race. The remorse from dropping out had been building in us all day, and seeing our cohorts finish when we could have, but chose not to, was difficult. Jason wished he hadn't quit and I wished I had done something more to convince him not to.

With time, the great panacea, and a trip to Santorini, burdensome guilt and regret eventually gave way to acceptance and perspective. I realized that experiencing Greece and being a part of Spartathlon offered a terrific opportunity to meet new friends, to share culture, to celebrate struggles, and to be inspired. After all, we choose these big adventures to not only tested our limits, but us to embrace, rather than be embarrassed by our vulnerabilities. True, the outcome was not what we had planned, but because of this, the process was perhaps more valuable.

Jason, already looking forward to his next endeavor, plans to run across the United States in the summer of 2016. But he'll return to Greece, someday, to kiss the feet of King Leonidas and be crowned with the ceremonial laurel wreath reserved for finishers. As he says, "Who needs sight when you've got vision!"