You’re in great physical shape, you’ve been spending the last couple months ramping up your training for the next big race….. and then it happens. It can start off as a small twinge of pain in your knee or as a soreness in your hips which you blow it off and keep running. Then a month goes by and it’s a little more nagging, and your frustration is growing. Now you are even closer to the race and become worried that it will affect your time. What do you do, keep training or stop? 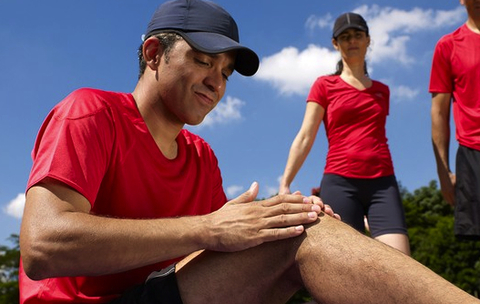 If you have been competing for any length of time you have likely heard this scenario from fellow competitors or even have gone through this in the past yourself. So what do you do now? An injury whether big or small can not only cause physical stress but also mental stress as it may cause you to stop or slow your training for that next race or event that you have worked so hard towards. But if you push through an injury you may be doing yourself more long-term harm than good as pushing through an injury will often lead your mechanics to change and cause a breakdown of other structures. Deep down you know you should see a doctor or physical therapist to help you, but like many you may be in denial that it is a problem, you don't want to be told to stop training, and you have high hopes that you can just "run it off." But in reality you are just putting off the problem and likely growing it into a bigger problem in the long run.

In some scenarios it may be a simple fix like running on a different surface or the other side of the road temporarily, changing your footwear, or improving your flexibility or strength in your hips. Runner’s World posted an article in 2011 titled “The Big 7 Body Breakdowns” that reviewed the top 7 running injuries and how you should approach them. As this article points out in most cases where the pain stops you during a run or the pain is progressively getting worse, you need to seek the advice and treatment of a physical therapist before it turns into something serious.

It is better to get it taken care of as a small injury and possible only having to decrease your training a couple weeks early on than pushing through it and it potentially ruining your racing season. At Synergy Manual Physical Therapy in Colorado Springs, we focus not only on your pain but also on finding out what is the movement or mechanical fault is that began the breakdown in the first place. Call or stop in today to set up an appointment and create a new, pain-free, beginning to your training. We look forward to meeting you!