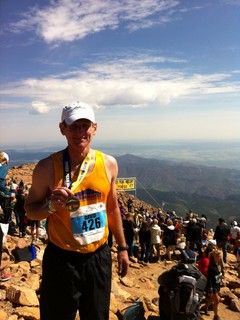 The Pikes Peak Ascent and Marathon are in the books.  Compared to the monsoons we had been having leading up to race weekend, couldn’t ask for a better weather.  Although I did hear a couple boomers as I was descending just above Barr Camp on Sunday.  Thoughts came to mind a few years ago when they had to turn folks around at A-Frame during the Ascent because of lightning.

I had no idea what to expect going into the races this year with the lack of altitude training.  And what was I thinking signing up for the "The Double?"  I had done the PPM a few times, but had never done the Ascent.

I felt pretty good though headed into the weekend and my running buddies gave me lots of positive encouragement going in.  For the Ascent, I had planned to go out and try to run a comparable time up the W’s to Barr Camp as I did in the Barr Trail Mountain Race.  That was about all I had to gauge against this year since really hadn’t done much on the trail itself.  I was hitting my splits all the way through Barr Camp and felt pretty good but just below A-Frame I ran out of gas.  I continued to plod along and just concentrated on putting one foot in front of the other trying to keep a modest fast hike up above tree line.  With about a ¼-mile to go, I heard Megan coming up behind me and encouraging me to push hard to the finish.  She was looking so strong so I could only step aside in amazement to let her go by me.  With her typical smiling face though, she did give me a lift and I was able to pass a few before the finish line to finish with a PR of 3:25:37.  Great job Megan on age group wins in both the Ascent and Marathon and setting a “Doubler” age group course record!

After suffering above A-Frame on Saturday, I didn’t know what to expect for the Marathon.  As I summited on Saturday with legs wobbly, I was thinking how am I going to be able to turn around and go back down the 16 Golden Stairs on Sunday.   Marathon morning started off pretty well.  I tried to temper my expectations and go easy knowing it was going to be a long day.  As we started up Ruxton, I found myself running with JT which is highly unusual.  So, I decided to tuck in behind him to try to hang on to his coat tails for as long as possible.  With JT’s help (he was having a bad day unfortunately for him, which was lucky for me), I was once again hitting my splits all the way through Barr Camp and up past the Bottomless Pit cut-off.   The only other time I’ve ever even been close to JT in a race was at the Boston Marathon when I passed him at about mile 23 as he was standing on the side of the road drinking a PBR.  Above tree-line didn’t feel quite as bad today and I was on pace to complete the ascent in a comparable time as on Saturday even with the occasional pause for the downhill runners.  I got to the summit in good shape and started my descent.  I took it easy down the 16 Golden Stairs to get my downhill legs going.  After Cirque, I felt pretty good and just let the legs work.  I made it through A-Frame in fine shape, but then caught a toe about a mile below and went down.  A bloody knee and scraps on my hands and shoulder resulted, but nothing major.  The fall did take the wind out of me and caused my leg to cramp, so it took me a few minutes to collect myself again to continue on the descent.  I was able to find my rhythm once again until just below the Incline cut-off I went down again.  Really?!  This time I did a face plant as my foot slipped on the loose gravel at Susie’s corner (that’s my unofficial name for the corner where my running buddy gave me the Lance look the last time I did the PPM as she left me in the dust).  I was able to pop back up and was no worse for the wear.  I got a slight lift as I headed down the W’s and could hear the loudspeaker at the finish line.  I knew the finish was within reach.  The adrenaline always kicks in as you pass the Cog Railway Station and head down Ruxton.  And then even a bigger boost from the cheering squad as I rounded the corner headed headed for the finishline for another PR of 5:26:55.

So, "The Double" is now checked off the Bucket List and I do feel a great sense of accomplishment for having completed two of the most grueling races around back-to-back.

This has been quite the journey this year.  I had an awesome time blogging and getting to know my fellow PikesPeakSports.us Triple Crown Runners teammates all of who were inspiring in their own right.  All while getting to participate in some of the best races around and had pretty good results to boot.

Once again, thanks go out to the race organizers and sponsors for putting on such a great series.  Also thanks to all the volunteers and El Paso Search & Rescue for the support since these races couldn’t go on with you!  And a special thanks to the City of Manitou Springs.  Despite the devastating floods, you opened your doors and hosted a great race weekend once again.

Awesome job Dave!!! You killed those races! It was so nice to see a familiar face in the Golden Stairs, thank YOU for the inspiration! Congrats on your PRs and placing in your age group! It's the Double Magic :)

Way to work out there Dave! I'm so inspired!