I've run the Triple Crown before. I've actually run it several times. I've completed the Pikes Peak Ascent 5 times and the Pikes Peak marathon once. My best Ascent time is 4:12. That was 9 years ago. Since that time, for one reason or another, I've slipped away from running. Focusing on different activities from time to time. I've always been a mountain biker so I would ride my bike, I did Crossfit for a while, I would swim or go to the gym and do my own workouts but I've always loved running and felt like a runner in my heart. 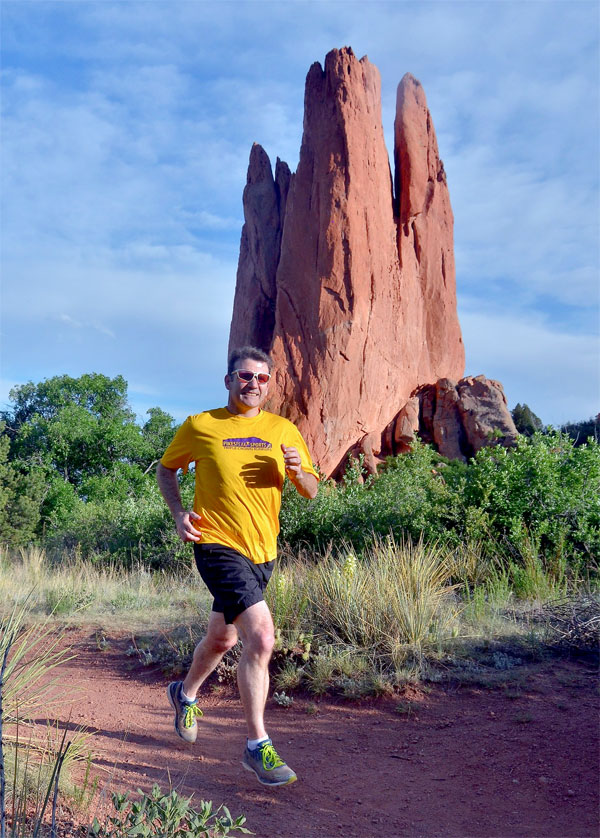 Honestly though, over the past few years, I've started to feel as if my time as a runner was over. Getting older, I'm 49 now, I've felt like my body has been turning on me. Where before I could do hard workouts day after day and recover. Now my body just doesn't recover like it used to. Aches and pains are normal now. It takes longer to warm up, I'm not as fast as I used to be (not that I was very fast in the first place) and the shape of my body has most definitely changed. I've struggled with these changes. If I'm not a runner or some kind of athlete then who am I? I've thought about this a lot over the past year.

Last year at this time my friend Tim Bergsten posted on Facebook that they were looking for volunteers for the Garden of the Gods 10 miler and 10K. I've run the 10 miler several times and Garden of the Gods is right down the street from my house so I volunteered to help out and be a course marshal. It ended up being a great day helping the runners find their way with some cool people. I noticed that when you watch a race from the first runner to the last runner you see it all. You see the elite athletes, the weekend warriors, the new runners who are just scratching the surface of what it's like to be a runner, the people trying to hold on to something that maybe they once had and the people bringing up the rear just trying to get to the finish. I started to think, where do I fit in all of this? The answer, I thought was easy, if you're not it the race then you don't fit in with any of them. That was a hard thing for me to realize. I'm not a runner anymore.

Over last summer I tried to get out running a few times but nothing stuck. I ended up riding my bike a lot and even started bike commuting to work riding about 50 to 60 miles a week. Riding my bike is awesome and fun but something has been missing.

This Spring I saw another message from Tim Bergsten asking for volunteers for the Cheyenne Mountain Trail Race. So what the heck, I volunteered. I ended up being grouped with an awesome group of people of which I was the oldest. Watching and helping all of the runners that day and listening to the stories of my co-volunteers, hearing all of their plans for running and racing I was inspired to run.

That next week I dusted off my running shoes and started running. My initial goal was to run two days a week because I didn't want to overdo it and get injured. I was going to take this slow and see what happened. Then I added another running day per week. Then I started to slowly increase weekly mileage.

During this time I saw another post by Tim Bergsten, Pikes Peak Sports was accepting applications for the 2018 Triple Crown Runners, the Mighty Marmots. I figured I'll apply and see what happens. A few weeks later I get the message from Tim that I was on the team. My initial response was AWESOME! My next response was unexpected, I was terrified! It takes a lot of running to train for and participate in the Triple Crown, what had I gotten myself into? I decided that I was just going to do my best and have fun with it. So I've kept running and my mileage has crept up. Not to the place where I think it needs to be but I'm improving.

The other day while out on the trail watching the sunrise I realized, I'm back. I'm a runner again. I'm not as fit or as fast as I used to be but maybe that doesn't matter so much. Maybe what really matters is that I'm not on the sidelines, I'm in the race.

I am totally looking forward to this year's Triple Crown of Running. It won't be easy but I am a proud member of the Mighty Marmots running team and I plan to enjoy every step.