I'm running my first winter series this year and am excited to be running with a team. I decided to join HART (High Altitude Running Team) this year and am running with the girls team for the series. I may currently be the slowest on the team but I have learned that running isn't just about how fast you are but about the camaraderie and fun had by all!

And the fun part for me is that I continue to see my personal bests improve. Since my husband, CJ, started coaching me last summer AND I agreed to follow his plan to run more consistently, I have seen great improvements. I had a PR on the 10k and the half marathon and am close to getting my all-time PR on the 5k.

Plus, I'm in much better shape physically than I was last year. Previously, I was working too much at a sedentary job sitting in front of a computer.

As long as I stay healthy, I am planning on a full racing calendar this year. Including my first attempt at the Ascent. Therefore, I thought running the Winter Series would not only be fun but a great way to stay motivated with my training through the cold winter months.

Preparing for the First Race

We weren't sure what the course was going to be like, but just after 6pm, I checked the Winter Series Facebook page and saw this:

Personally, I am still a cautious runner especially when it comes to ice and snow. My #1 goal is to stay healthy and injury-free. Therefore, I was concerned about the potential risk of slipping and/or falling on the course with 1-3 inches of packed snow.

CJ reminded me that he had won a prize pack from Trail Runner magazine and it included a pair of Kahtoola microspikes that were my size. It was too late to buy anything and so I was thankful we had a pair on hand for me to use.  CJ decided to simply wear his racing flats.  Me...I decided I would go conservative and try the microspikes.

I tried them out before the race and wasn't sure how I would like them. I saw Tim Bergsten and he said they would feel like wearing spikes on a track. They did feel great on the trail and I knew they would give me more confidence during the race so I decided to wear them.

Preparing for the First Race

At the race start, I looked around and not very many other people were wearing microspikes or Yak-Trax. I wondered if I made a mistake wearing them. The extra weight probably did slow me down at times during the race, especially when we were running through mud but overall I was glad I wore them. They gave me confidence to run fast on several downhill stretches (when I wasn't caught behind a group of runners) which helped me make up some time. 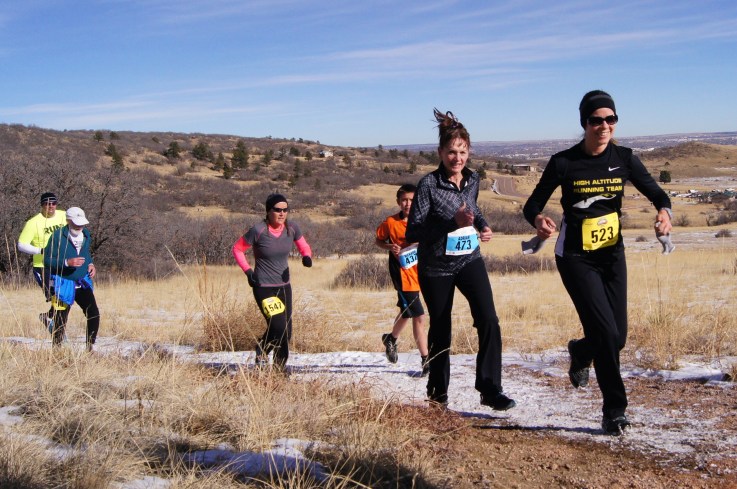 The course was tough...it was uphill out and downhill back with some rolling hills in between. The snow and mud also added an extra challenge. I finished 35:40 and 10th in my age group. I was joking with CJ that since it was my first 3.3 mile race, it was my PR. :) I feel good about the race and know that as I continue to train I will improve.

The HART girls are also second in the team competition right now. It will be interesting to see how we finish the series.

How are you staying motivated through the winter months? Are you running the Winter Series? If so, how did your race turn out?

Good luck to all the Winter Series racers! See you in a couple of weeks. :)