It's Time to Celebrate!

What an amazing day! Yesterday I attempted one of the most difficult things I've ever physically done before....The Pikes Peak Ascent (a half marathon to the top of Pikes Peak, ending at an elevation of 14,114 with 7,815 ft. vertical gain).

I've been training for this race for the past year. Literally.

And I was chosen to represent PikesPeakSports.us as part of their purple and gold team!  That gave me additional motivation to train hard and do well.

August 16, 2014 was not only a big day for me, but it was a big day for many around the world. The Ascent was chosen as the race for the World Long Distance Running Mountain Championships.

We attended the press release on Friday and all the countries were there with their best long distance runners sitting at tables with the flags from their country.  A team representative from each country sat at long tables in the front to answer questions.

It was actually pretty cool!

Team USA was stacked with some of the best mountain runners in the world and had the home field advantage. They not only did well, but secured the gold medal!  The top 3 women and the 1st and 3rd male were all from the US. Go Team USA!! 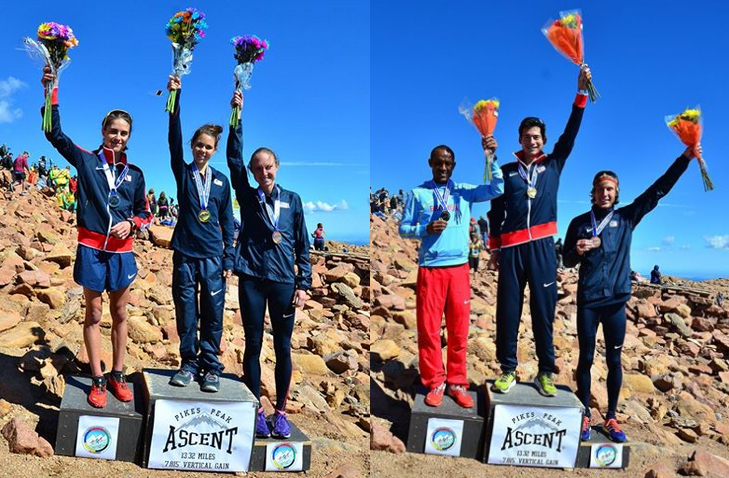 I Decided to Go For It

Although I've been training well for the Ascent, I wasn't sure if I should go for my BIG goal of trying to break 5 hours.  I was a bit afraid if I went out too hard in the beginning, I might blow up at the end.  CJ told me to go for it and see what happens.

I felt good (no injuries or sickness), I got a really good night's sleep the night before, and I felt ready.  So, I decided to go for it.

I printed off my splits I needed to hit in order to break 5 hours from Matt Carpenter's pace calculator and put that in my bag to have with me on race day. My PPS teammate, Mary Baldwin, wrote her splits on her forearm with a marker.  I thought about doing that, but decided to print mine off and put them in a plastic ziplock bag instead.

When I went to pick up my packet, Friday, Mary made sure I got in the team spirit (PPS triple crown team, that is) by giving me purple and gold nail polish to apply.  Even the guys on our team wore it! 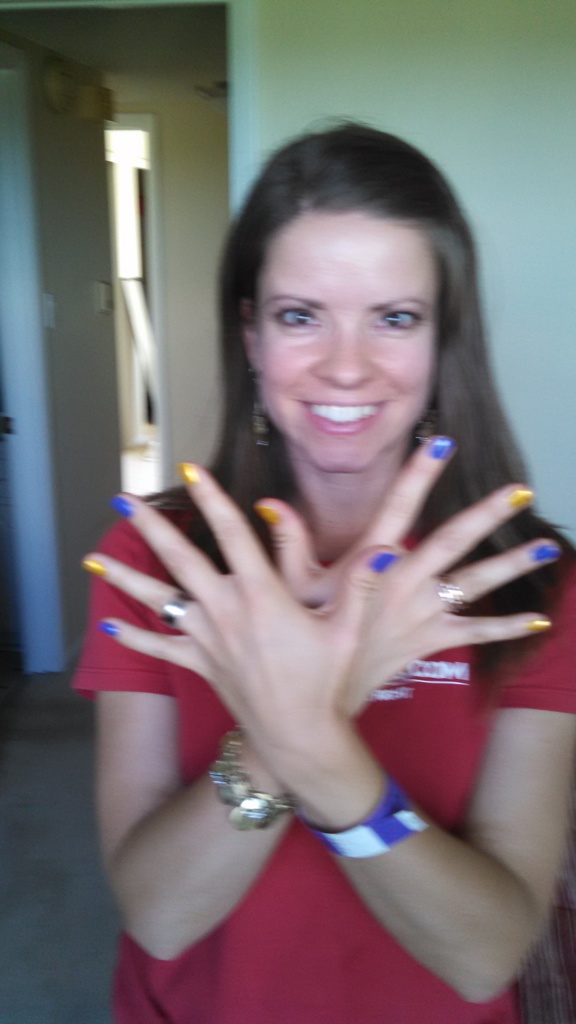 I also decided on what to wear and what to bring.  I brought 4 gels, 2 bags of sharkies, a Clif bar and some water with Nuun in my Nathan pack.  CJ couldn't believe everything I was taking, but I ended up needing most of it during the race.  Thankfully, Korina Nalbach, who has run the Ascent and Marathon before, gave me some great advice on fueling and what to wear.  There are so many last minute decisions and I was texting her questions the night before.  Thanks for your help, Korina!

After waking at 4:00am on race day, I fueled up with oatmeal, a banana, and coffee.  I was ready to conquer the mountain!

CJ and I before the race... 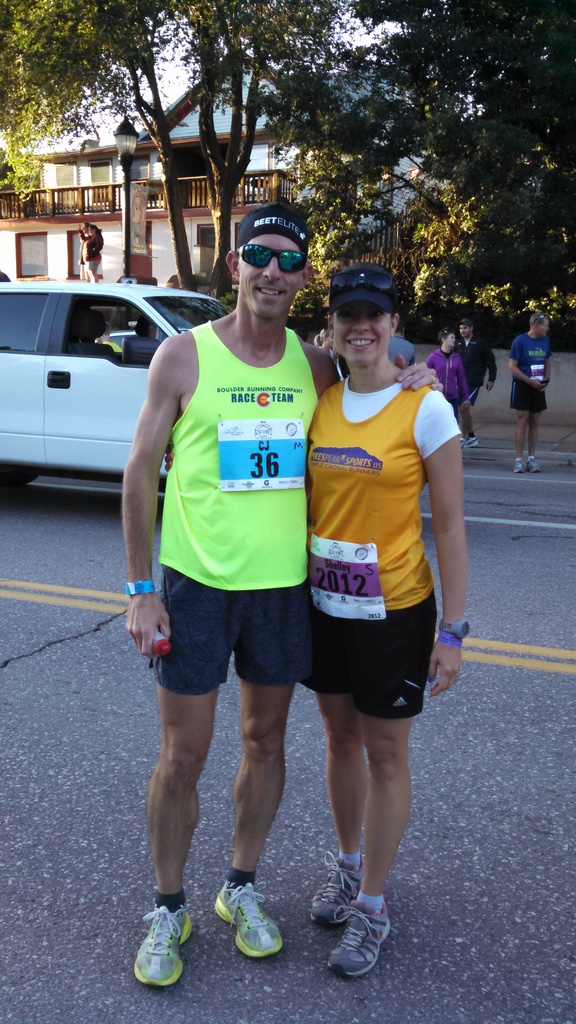 Getting in the Zone

Once I knew my splits, I kept my eye on my BIG goal of breaking 5 hours.  I was in wave 2 and there was a long "conga line" once we got to Barr trail.  It was very difficult to pass anyone until the 4th or 5th mile.  Thankfully, we were hiking at the pace I needed to go for my goal.  Otherwise, the beginning of the race would have been frustrating for me.

My friend, Anna Kharlamova, was volunteering at Barr camp with El Paso Search and Rescue.  She saw me and came up to give me a hug.  I quickly gave her a hug, but was so "in the zone" that I told her I needed to go quickly.  In hindsight, I wish I would have taken another minute to enjoy seeing her there, but I was a woman on a mission!

For me, the toughest part of the race was from Barr camp to A-frame.  It was the slowest part of the trail during my training too.  It gets a little technical in spots with rocks and is still in the cover of the trees.  It also feels like there is still so far to go.

At one point, I felt really dizzy and almost lost my balance.  I stopped, refocused myself, took a gel and some water, and recovered.  I kept telling myself during this part of the race, "Focus!" and I made it through without any additional problems.

My legs were starting to feel really tired at this point.  My glutes and hamstrings on both sides were telling me they were fatigued.  I knew if I stopped for too long, I may never start up again.  So, I stopped once to stretch but otherwise just keep moving one step at a time.

There is something magical that happens for me when I hit A-frame.  It happened in training and it happened on race day.  It's as if some sort of mental switch goes off in my mind telling me I'm almost there.  Although most people say the top 3 miles is the hardest part of the race, I didn't necessarily find that to be true.

Now don't get me wrong.  It was tough.  It was a mental challenge...esp. the last mile.  But, I had a faster pace on the last 3 miles than I did from Barr camp to A-frame.

I was on a mission to get my goal!  I felt good, my breathing was fine, and I knew my high altitude training prepared me well.

As I powered up the last 3 miles, I began passing other runners.  Some were from sea level and didn't have the high altitude training I did and so were struggling.  Some went out too fast in the beginning and it was catching up with them.

However, I hit a snag.

I caught up to a big, long "conga line" of other runners.   It seemed as if I would get stuck behind them and might not be able to meet my goal after all.

At this point, I had come a long way.  I had trained for a year.  And I was so close to reaching my goal.  I wasn't going to let this "conga line" keep me from it.  Therefore, I began to power pass people and sneak through the line.  It took extra energy to do this, but I eventually made it to the front of the line and never looked back.

The last mile felt like the longest mile of my life.  I kept telling myself, "Just Keep Moving."  In Matt Carpenter's description of the course, he says to "Just Always Move" (JAM) during the top 3 miles.  And I did.

As I crossed the finish line at 4:53:09, I immediately had tears in my eyes.  I did it!  My motto throughout this entire last year of training was, "I can do ALL things through Christ who gives me strength."  I'm not an elite athlete and don't excel at sports.  But, I had just accomplished something so big, it was almost surreal.  I had to hold myself back from truly crying (happy tears) as I was so relieved, thankful, and happy!  I not only survived (which was a concern of mine!), but I thrived!! Woot! 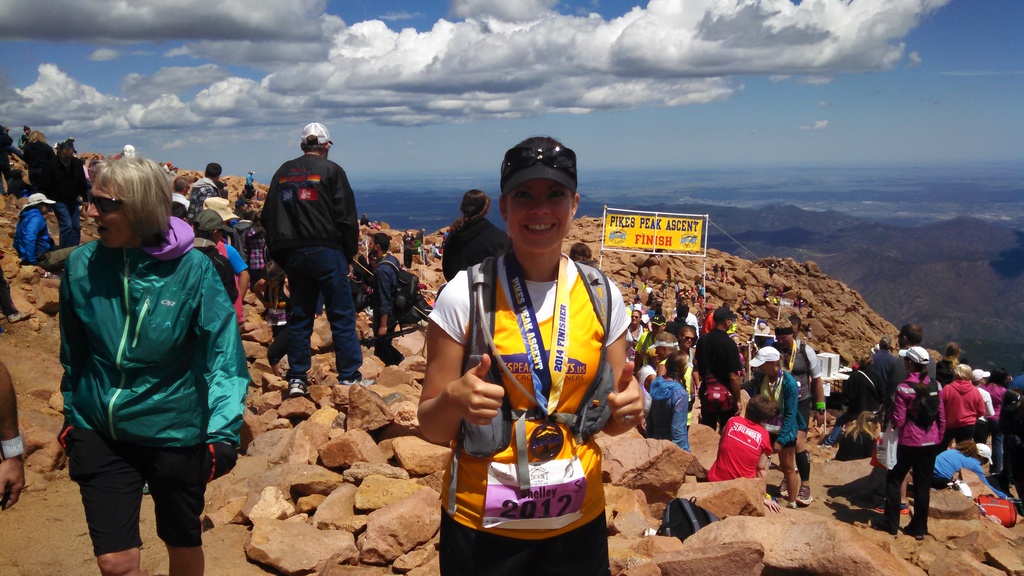 Thoughout the last few weeks of my training, I have sensed in my times of prayer that finishing the Pikes Peak Ascent (and thus the entire Triple Crown of Running races), was somewhat of a parallel to my life.  I won't go into all the details, but the last 10 years have been really tough.  And the last few years held sorrows of their own.

This last December, I grieved a very deep loss in my life.  And running became one way I coped with this grief.

I decided to make this a year I dedicated myself to running.  I ran the Winter Series, achieved a 5k PR I thought was beyond my reach, I applied for and was chosen for the PPS Triple Crown race team, and completed the Pikes Peak Ascent as well as all three Triple Crown races.  Wow!

I have no idea what is ahead for me in this life, but I do know something amazing is ahead.  When we go through tough times and persevere, it is worth it.

The theme I felt God gave me for this year was, "Press On."  And it is so applicable to what I accomplished in this race.  I set my eyes on the goal, pressed on, and accomplished more than I could ever imagine.

Thank you Tim Bergsten for giving me the privilege of running as a "sponsored runner" this summer and part of an amazing team...the PikesPeakSports.us Triple Crown Runners.  It has been a highlight of my year and something I will always remember.

I encourage you all to set goals, go after them, and PRESS ON!!

My theme song for this year, "Press On" by Mandisa:

GREAT blog Shelley. A spot on depiction of what this event is like. Anyone reading this will come away knowing exactly what the entire journey is like. I'm glad I'm not the only one who was talking to themselves out there!

So proud of you Sweets!