Race day always seems to arrive a little quicker than you want them to!

As I mentioned in my previous post, I was not back to running until April, and not ready for any running in the Garden for a few more weeks after that. Definitely not an ideal training plan for the Garden 10-Miler! I did my best though, and got in the Garden about 3 times a week, feeling a little better each time. My longest run since my injury was last Sunday, at 9 miles. It was a rather miserable slog, but I got it done and was happy to know I'd at least make it on race day without being too much slower than previous years.

The week before the race was also not ideal; I have a history of having terrible weeks before a big race and this one was no exception! I worked an overtime week at my job, which meant not enough sleep and a lot of time on my feet, and last night was an 8-hour shift with no break at all to eat, drink, or sit down. It was hard to decide what to eat when I finally got home at 10:30pm that wouldn't be too heavy but also substantial enough to build up those glycogen stores a bit!

So needless to say, I started out race morning a little worried. I was tired, my legs and feet ached, and I knew I was dehydrated. Fortunately I think my body is used to being in a wrecked state before big races! 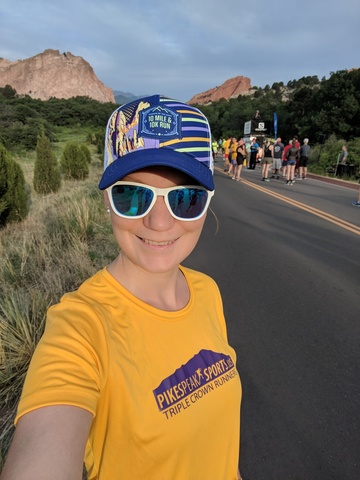 As ready as I'd ever be!

The race started promptly at 7am, and I was thankful for some cloud cover (even if it was mostly from a huge wildfire in southwest Colorado, ugh) to keep it from being too miserably hot. I felt pretty good for the first few miles. I ran with a couple friends and made good use of the downhill portions.

Around mile 4.5 I noticed my energy was going. Everything was a struggle after that. I had to do some walking on every hill and my mile splits got much slower. I had a gel with me because I knew I would probably need it, but I was worried it would upset my stomach if I took it. I had also taped up my knee before the race but forgot I had some lotion on my legs, so the tape wouldn't stay and I finally peeled it off. My knee was mostly okay without it but I could feel the occasional twinges on steeper sections of the course.

The aid stations were awesome as usual and I loved the "rain" at the Scotsman station and the super soakers at the last station! I also want to give a shout-out to the bagpiper who plays at the top of the big hill. He is there every year and nobody ever mentions him, but he's amazing! He plays the whole race and I can't even imagine how difficult that is.

I finally took my gel at about mile 8 and I think that helped me make the final push. It was a great feeling to get to the top of the last hill and know it would mostly be a downhill cruise to the finish! My only goal was really to finish, but if possible be under two hours, and I accomplished that with a time of 1:50. It is my slowest Garden time ever but I'm just glad to be running! I had some breathing issues as soon as I crossed the finish line, which was weird and a little scary. I felt like my chest was in a vice. I'm not sure whether to blame allergies or the smoky air but hopefully it doesn't happen again! After sitting down awhile and downing a few cups of water a friend brought me, it slowly went away. 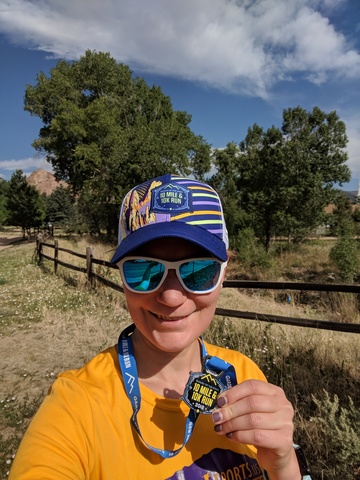 Happy to be done! 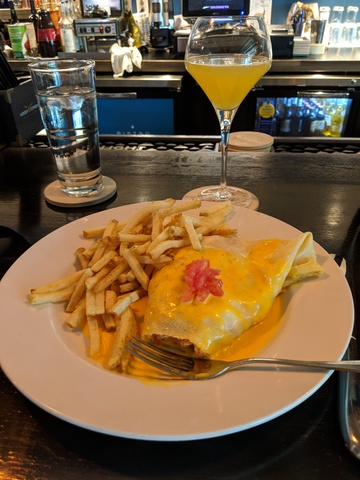 Post-race refueling at Coquette's Bistro! I have celiac disease so no finish line pizza or beer for me, sadly!

This week I am going to get back on trails and start getting ready for the Summer Roundup on July 8th. I am not looking forward to starting from scratch on trail running but boy have I missed them!