I'd like to be able to write an inspiring blog post about being super disciplined about training, despite life throwing out everything it has at me to keep me from my runs. I'd like to brag about how lack of sleep, physical exhaustion, and lack of time simply made me even more determined to get out there and get it done. I'd like to tell you that nothing is more important to me than sticking to my training plan and nothing comes between me and my running!

Sadly, I am not that person, so you'll have to look elsewhere for that kind of inspiration. ;-)

Training has not looked anywhere close to what I would have liked it to since the Garden 10-miler. Some drama with a co-worker at work has led to me putting in many hours of overtime almost every week and trying to do the work of two other people in addition to my own. Not to mention we are coming up on our busiest, most important week of the year: the Pikes Peak or Bust Rodeo, so preparations are ramping up for that. I find it simply impossible to get up early for a run after working into the night the night before and needing to be back at work by mid-morning. My nutrition is usually not ideal (eating dinner at 9pm after eating almost nothing since breakfast does NOT make for a good run the next morning, in case you weren't aware), busy days at work usually mean hours and hours on my feet and lifting lots of heavy things, and basically I find it more conducive to my mental and physical health to get enough sleep rather than run just so I can say I did it. Maybe that makes me weak and undisciplined, and maybe better people than me out there can get it all done. But I'm not other people, I'm me. Shaming myself by comparison to other people is fruitless and I refuse to do it.

So with that said, training has been less than ideal, but I've still managed to get some good runs in. After a few days of rest from the Garden 10-miler, I got back on the trails for the first time since my injury in March. I was worried about my knee on uneven terrain but it held up very well. I get some nagging achy pain in it occasionally on long rocky runs but nothing bad enough that I feel like I should pull back. 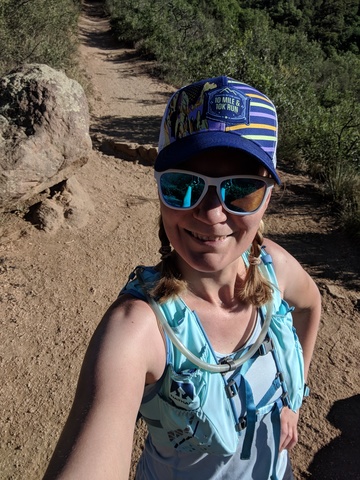 Pretty happy to be back on Barr Trail! 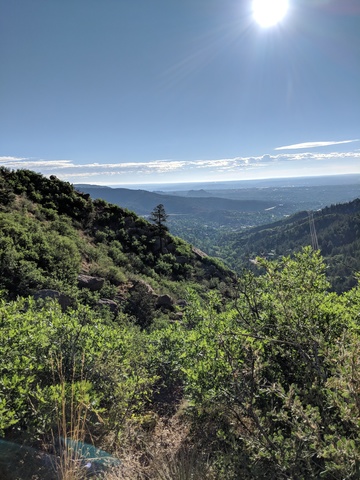 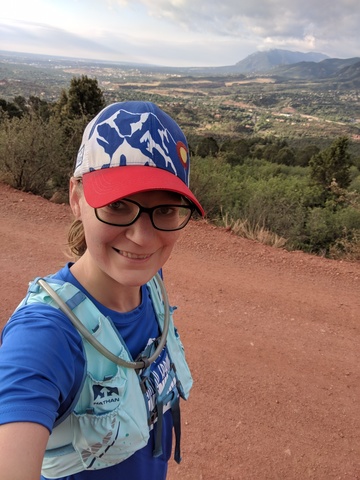 All smiles on a tough but good 8-miler on Rampart Range Road  last weekend.

This past week I tried to figure out the line between getting some productive miles in but not making myself too tired for the race. After a long run on Sunday and a few hilly miles with the Attack Pack on Tuesday morning, I decided to err on the side of rest, especially with being thoroughly worn out from work.

After 2 years doing the Summer Roundup in Bear Creek Park, I had been pretty excited about the location change to Cheyenne Mountain State Park. I can't say the extra miles thrilled me quite as much, haha, but honestly it's a much-better lead-up to Pikes Peak than the old course. I'm pretty familiar with parts of the park, but was excited to run on some different trails than I'd run on before in other races. I think that helped keep me motivated today; the park is so beautiful!

The first mile was very congested which I honestly liked since I have a very bad habit of going out too fast on races. It finally thinned out and we could start running. I was feeling pretty good but still decided to take the hills easy since I was familiar with the Talon loop that would come later in the race and knew I'd need some energy reserves for its tough climbs. Once again my knee tape failed to stick as soon as I got sweaty around mile 3, so I dealt with a pretty constant dull ache in my knee the rest of the race. I think I need to try a different brand!

Miles 4 and 5 were my favorite as they involved a lot of rolling hills and time in the shade. It felt like I was back, baby! But all too soon I was on Talon and the climbing started. I was entertaining hopes of finishing in under 3 hours by this point, but still knew better than to try to run any of the climbs or I'd bonk spectacularly. The Talon loop is gorgeous but seems to last forever. My legs were feeling pretty trashed by the time I finished it but I still tried to make the best use I could of the downhill. The last mile and a half was frustrating because my body was so done but it was so runnable and I was cutting my goal time so close! Not even hearing the finish line noise could propel my legs any faster though, and ultimately I crossed the finish line with a time of 3:01. It is what it is; I'm just thankful to be out there doing what I love despite all the crap I've gone through this year! My friend Maddy and I, happy to be done!

As I mentioned, next week is the Pikes Peak or Bust Rodeo. There will be no running; my only priorities for outside of work is eating and sleeping! But once I get through that, it's crunch-time for Ascent training! Stay tuned. :-)

proud of you and i’m sure many of us who struggle with work life balance indentify with you and find you inspiring!