For 2016, I had this crazy idea to start something called the Brewers’ Cup. The premise was simply to find other folks who loved beer and running as much as I do and make it a little competition. I had an inkling that there were a good number of people who might want to play along, but I had no idea that that number would explode to 19 teams of 15 runners each, with a waiting list that expands every day since we’ve started the competition two days ago.

I didn’t do very well in high school chemistry, but I do remember that sometimes when you combine two elements you get a weird, unexpected result. In that manner, beer and running  have managed to cause a truly unique and exciting reaction when combined and released upon the masses. Turns out, it becomes incredibly potent.

My wish for the Brewers’ Cup was that it would inspire people to get out and run and/or walk and/or simply crawl instead of sitting at home and staring at the television.  My many years of being a fitness trainer compel me to advocate activity and besides, it’s always better to exercise with friends. The vehicle I chose to use was the Pikes Peak Road Runner races, which include 38 running events over an eleven month period. Twenty-two of those events are completely FREE which means people have little excuse not to attend. Add that you have potentially fourteen other teammates expecting your arrival and you’ve now created a powerful type of motivation that I like to call “peer shaming”. It’s rude, but effective.

If mission number one was to encourage exercise and promote Pikes Peak Road Runner races, mission number two was to reveal to my running friends the incredible local brewery scene we have here in Colorado Springs. Sure, most of my friends are already aware, but being aware and getting your tushy in the brewery and spending your dough are two different things entirely. I am eternally grateful to all the wonderful brewers we have in town and like to make sure they feel appreciated and rewarded for the work they put into running these businesses. They are hard-working entrepreneurs who deliver joy and friendship to the community and for that, I wanted to include them in my evil scheme to make folks exercise. We essentially combine the two. We give folks gang-like t-shirts of their chosen brewery team and ask them to run as representatives of that special team. This is entirely different than sitting at home watching television and cheering for athletes you have never and will never actually meet, but now you can actually BE the athlete in the game! The scoring was specifically designed so that the average Joe can be any team’s MVP simply by consistently showing up. Speed isn’t necessarily the winning ingredient because if you run the numbers, the fact is that the team that runs together will be the team that wins. Like any success in life, it can’t happen unless you actually show up. It’s science, as I recall.

In the last two days, we have set attendance records at both the Rescue Run 10K/5K race and the Nielson two mile Challenge. In addition, the Brewers’ Cup runners more than tripled a typical evening’s revenue for a local brewery and we are just getting started. We’re showing up in mass and smiling, making new friends, taunting other teams and having loads of fun. This makes my little idea come to life and brings me the same kind of joy I’ve experienced while watching my own kids learn to ride a bike or swim for the very first time.

It’s knowing that lifelong friendships are beginning and so many people who weren’t necessarily athletes in 2015 are lacing up their shoes and showing up to run this year all because of this little experiment called the Brewers’ Cup. Turns out, more people love beer and running as much as I do. They love camaraderie. They love teamwork and they love being included in something bigger than themselves. Imagine that. To all my Brewers’ Cup runners and those associated with the Brewers’ Cup who have made this possible, I am supremely grateful and honored. A good idea is just a good idea until a group of folks help you bring it to life. The Brewers’ Cup competition is alive and thriving in its first three days of existence. I hope we can continue this energy through the upcoming Winter Series races and all of those little gatherings and runs in between. Be strong, be happy and most importantly, be aware of the gifts that you alone bring to the table. Happy New Year! 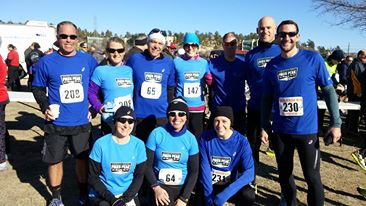