Crushing the Desert of Despair

I've been told that if you can't define success, then it's impossible to achieve. That is why I take a deep look within myself before setting any lofty goals. I believe it's important to understand why I've set those particular goals and what I'm specifically trying to achieve. Success for me has always been defined as the fulfillment of my soul.

Several months back I set a goal to qualify for Boston by running the Big Cottonwood marathon in Salt Lake City. For a 43-year-old woman, the goal time is 3 hours and 45 minutes. I missed that mark by 13 minutes but couldn't be happier with my performance. If that boggles your mind, you should understand where my soul truly set the mark. 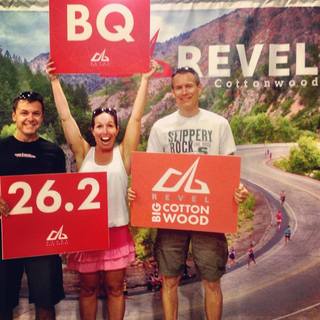 Unlike most runners, participating in the Boston Marathon has never been my dream. It's never even been a passing thought. I have seemingly endless numbers of friends and acquaintances and even my own husband that are legitimately good runners and have either run or at least qualified for that race numerous times. Although I know that realistically those people aren't just genetically blessed, but rather put in the steady work to make that happen, I've never been able to mentally place myself among their ranks. Even after running for over 25 years, I still am unable to visualize myself as anything other than your average, mid-pack runner with occasional flairs of potential. I believe that's who I am. I've always had fleeting inclinations to improve my overall running, my mental focus, my athletic confidence and my ability to be consistent with my training, but life always seem to get in the way and I revert back to plodding along the trail – only reliable for the regular, cheesy race photo and mascot-like disguises. I've actually run two previous marathons and a 50K trail race before, but I've never truly worked to see how FAST I could complete any of them. If I'm brutally honest, I've remained that way because I've always been too terrified to truly challenge my body lest I find out that in fact, I can’t be the "good" runner that I admire in everyone else. Fear has usually held me back.

The first step to overcome was simply having the courage to make my goal public. This meant opening myself up to others and becoming vulnerable by not only making the journey public, but also the potential failure. This was terrifying to me. Next, I had to seek help from a coach and commit to a training plan that would push me to run faster and farther than I ever had - remembering that I'm also many years removed from my previous running "peak" sometime in the late 90s. This was also terrifying to me. Knowing that I've had a few years when my knees simply didn't want to run downhill at all, here I was committing to a 26.2 mile steep, punishing downhill road race. Even my mother thought I was crazy. Lastly, I had to make a new commitment to my husband to not just be his casual running partner, but to honestly train hard for his Boston Marathon, the race he's always considered the pinnacle of running success. He was excited. I was terrified. Still, I wanted to make him proud and I wanted to share that achievement. 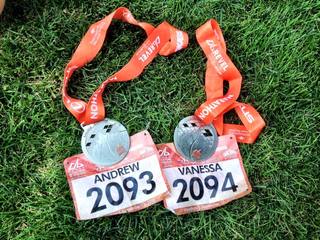 As we began training, I was often deflated by his well-intentioned but counterproductive suggestions of how he felt I should be training versus what my coach had prescribed. Many times his remarks caused me to second guess my goal and lent more volume to the voice inside my head that kept whispering "I can't do this". However, I was always keenly aware that this man still crawled out of bed in the early morning hours to accompany me on runs that in no way helped the faster times he needed to qualify on his own. Although he sometimes unknowingly defeated my confidence with his suggestions, there was never a doubt that he was devoted to helping me in every way he could and I am always grateful for his company and support, even if it doesn't always present itself in the way I would prefer. His love for me is obvious and it carried me through many days when I didn't want to train at all.

Having completed months of disciplined training and pushing myself fairly consistently is something for which I will always be proud. On race day, I had to consciously measure my breathing on the bus ride to the start line due to my intense nervousness and fear. I wanted to trust my training and all the well wishes I had received, but I still could not see myself as anything other than your average runner. I didn’t belong there. As the race began and I settled into my desired pace I began to realize that I was, in fact, prepared. My pace was strong, I felt good and I was thoroughly enjoying the run. I was caught up in my music and recalling with fondness all the work that had brought me to that day. It wasn’t just about me but everyone in my path that helped me get to that point. It was about friends, family, my coach and, I had to admit in order to conquer my own self-doubt, that even my own determination and ability made this possible. I was truly awed about what my body was doing and as the miles seemed to effortlessly tick by I couldn’t help but giggle at the pace that my watch was reporting. Unbelievable. I was DOING it. 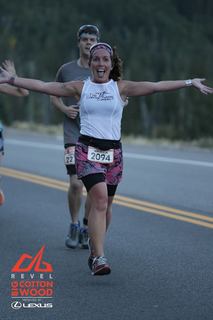 The course remained beautiful and downhill for the first 20 miles and at that point, I was still on pace for my Boston qualifying time. I was already envisioning my success in crossing the finish line….and then the course changed. We descended out of the canyon and into an incredibly hot, barren, industrial section that would continue until the finish. I was still in good spirits until the sun began to take its toll and due to the out and back nature of that section, I witnessed my husband and another friend of ours pass me on the way back in. They both looked miserable and well behind the pace I knew they typically ran. As I looked around, I noticed that nearly everyone on the course had the same miserable look and almost immediately, I felt that same soul-sucking curse on me as well. It was similar to the scene in The Neverending Story where the horse succumbs to the Swamp of Sadness and is consumed into the dark, filthy depths due to his inability to fight off the despair and his owner’s inability to motivate and instill any sense of hope. In this case, I was in what would be more appropriately called the Scorching Concrete Desert of Despair. I suddenly felt like I needed more water but that meant I’d have to walk the aid station in order to gather a sufficient number of cups. Once I started walking, my quadriceps began to tighten and it became incredibly hard to get myself back to any reasonable pace. Add that I also no longer had the glorious benefit of the shady trees or the downhill, but rather a flat at best and downright uphill course in a few small sections. I began to watch my pace dwindle and even had to resort to walking one hill somewhere near the mile 23 marker since my legs were beginning to revolt. The remaining 3 miles were smack in the middle lane of bumper to bumper traffic, which was hardly motivating or scenic, and as I was hobbling along, I saw the 4 hour pacer jog past. At that time, I said to myself, “NO. This will not happen.” I’ve always admired anyone who’s broken the 4 hour mark of a marathon and I decided that although my Boston goal had come and gone, I was not about to give up my chance to join this accomplished group as well. I picked up my legs as best as I could and focused on the large, looming finish line in the distance. Giving all I had, I made an admirable attempt at sprinting to the finish and crossed the line in 3:58:03 - a full 42 minutes ahead of my fastest marathon. SUCCESS 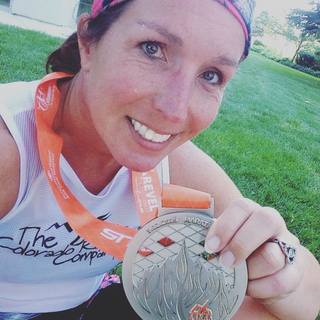 I saw my husband coming to greet me as I flopped down in the first clearing I could find (even though it was on the concrete) and threw the cold towel on my face. I choked up a bit about not meeting my Boston time, but was simultaneously overwhelmed by what I HAD accomplished. I’d done something incredible. I finally felt like a runner. Exhausted from the effort and incredibly pained from the relentless descent, I still could not believe what I’d done. I was picturing myself only hours before sailing down the canyon and feeling truly STRONG. All the work I’d put in suddenly made sense. I realize even now that I did something I never thought possible and I’ve gained a confidence that no one can ever take away. I followed through with the hours, weeks and months of work, faced my fears and emerged with a soulful success. I feel fulfilled in ways I cannot explain. There was a bittersweet emotion knowing that my husband did not achieve his Boston goal time either, though I know that is mostly due to his training with someone significantly below his skill level. He had sacrificed his own goal in order to help me meet mine and for that, I can never love him enough. We shared a journey together and success or failure, I know we'll always end up collapsed side by side, sharing in the joy and pain. 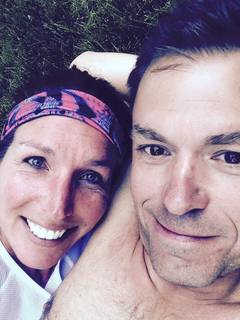 I won’t make it to Boston in 2016 and that’s okay. What I carry with me instead is a crystal clear, beautiful understanding of success. It is defined by the peacefulness in my soul. By that standard, I accomplished all I set out to achieve and I owe a tremendous thanks to nearly every one of you reading my blog because chances are, you are a part of that glow. Thank you all and I hope that you, too, find your own success.