Chris Cunningham and I reluctantly went outside on his mom's command to "enjoy the fresh air" that day.  We were twelve.  Lacking any other appealing options, we decided to head out to his driveway and play catch with a football.  A real football, too...not one of those fluorescent, sticky Nerf ones that were only awesome until chunks came out of it.  For no real reason, I intentionally overthrew Chris once.  Not by a foot or two, but by maybe ten or twenty.  Enough to land it straight into…

Victory is so much easier to write about than defeat.  But it's from defeat where we learn to appreciate victory.  I can only hope my last outing to the Weminuche Wilderness teaches me something.  It has nothing to do with Pikes and little to do with Ascent training, but it is a window into what this whole pseudomountaineering thing is all about. 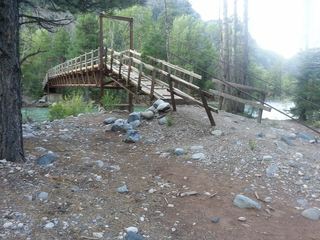 Pikes training is a blast.  Seriously, it's so much more complex and intricate than your standard 16-week canned marathon plan.  There are so many things one can do to prepare, and so many ways to leave oneself wondering if enough has been done!  It doesn't matter if you're an elite, grizzled middle-of-the-pack vet, or newbie just hoping to hit the cutoffs...there's always something more to be…

Although I know there's value in it, there is a part of me that feels kind of silly writing a race report for the Summer Roundup.  Why?  I purposely treated it like any other day - I didn't go to bed early the night before, did no special hydration, didn't dwell on my splits or feel the need to memorize the course in the preceding week.  I didn't taper for it, didn't wear racing flats, didn't do the standard pre-race warmup routine.  I just showed up, ran, and had a great time with my Purple…

This past week, some of my best college buddies came out to visit.  I had scared up a vision for us to casually hike the Elk Range's Four Pass loop, knowing that in a normal year we may have to deal with a little bit of snow near the passes.  Our plan called for some fairly low-key hiking - we had budgeted three days to complete the loop.  Once we got into Aspen, we learned one of the passes…

There are many types of runners.

Recreational runners.  The lion's share of people who run probably fall into this category.  They run a couple times a week, maybe at the Jack's Quinn run or a familiar neighborhood loop.  Maybe they're training for a 10k in a couple of months.  For them, running is fun, but hey, who has time to run all the time when you've got a job and a family and a 45-minute…

Well, it's been a week since my crushing defeat by J.T. at the Garden 10 Miler.  I've assumed a new name, nationality, and residence.  Hopefully the shame won't haunt my descendants for centuries.

We went on our annual Cheyenne Mountain HS cross-country summer trip earlier this week.  32 kids and 4 coaches marched up to the Shrine Mountain Inn huts just off of Vail Pass and planned for the season for three days and two nights.  If you're a…

If you're the type that likes to boil everything down to its bare essence, then yesterday was a pretty darn good day for you.  After all, in a head-to-head match with death, you won 1 to 0.  Heck, you and I both have quite the streak going vs. that guy.  I believe I'm winning the battle, 14,277 to 0.

Problem is, the game is over when death wins once.  Kind of unfair the way that works, but whaddyagonnado?

Death isn't the only one that works this way.  So does…

Three days into my first full week of summer, and I've managed to squeeze in a few more challenging days outside.  On Monday, I drove down to the Sangres and climbed California Peak.  Yesterday, it was time to see the Sawatch.  I did an out-and-back over Carbonate Mountain, Cyclone Mountain, and Cronin Peak.  Both of these climbs were considered "checkmarks" - climbs that offered opportunities to get in shape, but without much technical challenge.

This morning, however, I had…

May signals the beginning of summer here on the Front Range.  Up in the mountains, however, it's prime snow climbing season.  For a short period of time, temperatures up high consistently rise above freezing during the day and drop below freezing at night.  This causes snow that has been deposited in shallow gulleys or couloirs to repeatedly freeze, thaw, and freeze again.  This in turn stabilizes the snow and makes it safe - and fun - to ascend, provided you have the proper gear.  Often…

I kind of have a love/hate relationship with the Garden of the Gods.  Before I had ever set foot in the great state of Colorado, I knew the following about Colorado Springs.

So there I was, just putting one foot in front of the other, minding my own business on some trail when BAM it hits me - THE MOST AMAZING THOUGHT EVER.  Suddenly, life made sense.  Or at least, whatever it was I was trying to figure out suddenly made sense.  So, I put the thought just behind the forefront of my other thoughts, cataloged for later use.

Whaddyaknow...up and over and around a few more bends, hills, nooks, crannies, and suddenly I have yet ANOTHER revelation.  I'M…

Like about 2,000 other people out there in crazyland, I hope to complete the Pikes Peak Ascent on August 16th.  If things go well, I also hope to do the Pikes Peak Marathon the next morning.  Nothing unique there - there are 159 of us signed up for…