When Ryan Hafer topped the famous "W's" section in Sunday's Barr Trail Mountain Race, it was like he was on another planet - one that didn't include Matt Carpenter, the world-class veteran mountain runner from Manitou Springs.
For years, Hafer had ran competitively against Carpenter, but he struggled to beat him.
But there is a first time for everything. Hafer started quickly in the 12.6-mile race that takes runners from the Cog Railway Station in Manitou Springs to Barr Camp and back.
"I start fast most of the time," Hafer said. "But once I got past the W's and Matt hadn't caught up with me yet - everything there was new territory for me."
From that point, Hafer said it was a matter of setting small goals ... get to the next aid station ... Get to Barr Camp. When he hit the dirt road and then the pavement at the race's end, he new he was safe.
A crowd of about 200 people expected Carpenter, who had won the race six consecutive years, to charge to the finish line unchallenged. But this year it was Hafer who galloped home alone in his old Coronado cross country jersey. He crossed the finish line with both arms raised, setting a new course record of 1:29:05, about 28 seconds better than Carpenter's old mark. 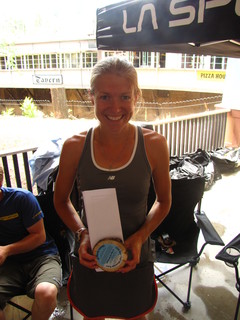 Brandy Erholtz of Bailey had a record-breaking day as well. She set a new mark in the women's race, with a winning time of 1:47:57. And it came on a day when she wasn't concerned with time. She usually keeps track of her pace, but she left her watch at home. The results were exactly what she had hoped for.
"Today I just raced the course and raced the people and ran by how I felt," said Erholtz.
Hafer ended years of frustration with the win. He placed second to Carpenter three times since 2004. Last year he was third.
"I've been close," he said. "I tried to go for it every time. It doesn't always work out. You have good races and bad races. Today is just a good day."
Carpenter finished third in 1:35:46. He had won the previous six Barr Trail races, with eight titles in 10 years.
He didn't make any excuses, though Hafer is 20 years younger.
"I've always said if you're not winning, you're not training hard enough," Carpenter said. "By my own definition, I must not have trained hard enough."
Carpenter said he new he was in trouble early in the race.
"After the first mile he already had such a gap," Carpenter said. "And, I knew he wasn't going to slow down. So I had a decision, go harder and risk blowing up more, or try to salvage something. But, even if I had ran my best, I would not have won. I'm very happy for him to finally break through."
Rickey Gates of Boulder finished second in 1:35:29. Alex Nichols of Colorado Springs was fourth (1:36:13) followed by Peter Maksimow of Manitou Springs (1:36:19.)
Erholtz who will join the four-woman U.S. Team that will compete in the World Mountain Running Championships in September, said he had to get up the mountain quickly because others - such as second-place Laura Haefeli of Del Norte - are faster than her coming down.
"Laura took off a little faster than me, but by the time I got to the trail (about .75 miles) I had the lead," Erholtz said. "But I never really relaxed with Laura. I may be a stronger climber
but she is for sure better at the down. So I never really was confident until
like the last half a mile and then I was like, 'OK, I think I have this.'
Haefeli clocked in at 1:50:32, followed by Silverton's Megan Kimmel, third at 1:56:13, and Lisa Goldsmith of Nederland (1:59:12). 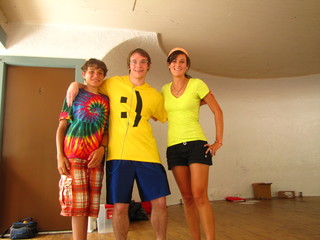 Doing it right: Carpenter was a little disappointed, but The Barr Trail Mountain Race really is his baby. And he perked up when he talked about the sponsors that make it happen, as well as the High School Aid Station Challenge, which this year collected $6,000 for area school running programs.
"I was one of those outcast kind of kids who benefited from being on the cross country team," Carpenter said. "Some of our teams here in Colorado Springs don't have enough money to by matching uniforms. I know how important that can be to some kids."
Manitou High School's aid workers were voted the best of five schools and earned $2,250.
With the help of a $6,000 sponsorship by First National Bank, the Barr Trail Race returns all entry fees to the community.
"This is our kind of race and we're happy to be a part of it," First National Bank CEO John Georgeson said.
This year, the nonprofit Friends of the Peak received a check for $6,273. El Paso County Search and Rescue received $6,472.