As you know, I have spent a bit of time researching a good cold weather, minimalist trail shoe for those times (like now) that I am not able to run in my huaraches.  After a lot of research and agonizing, I decided on the VIVOBAREFOOT Neo Trails.  Well, they arrived yesterday, and I've never been more excited about getting new shoes! And my wife reminded me of the "new shoes" song (which is posted below) :-) But I digress...  anyway, I had to hit the trail bright and early this morning of course!!


Before I jump into a review of my impressions, please note that these are my first minimalist shoes, and my only other experience has been with my 6mm Contacts huaraches from Invisible Shoes.  So, I can't give any comparison to other barefoot shoes (or bareshoes, minimalist, natural running shoes... whatever you want to call them!).  I can only compare them to my sandals, old running shoes, and of course barefoot!

Yesterday after the shoes arrived, I put them on and wore them around the house, and out and about just to get a feel for them.  Immediately after putting them on, I noticed a certain amount of toe spring (which I expected from reading other reviews), however it was really only most noticeable when standing or walking.  Also, after putting a few miles on them, it was not nearly as apparent. 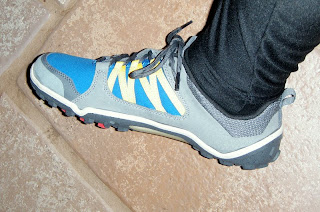 Also, I was happy with the toe box and width, as they fit well, and still allowed good room for spreading/flexing my toes as needed.  The lacing was snug, and it was so great to put on a full shoe with a zero drop from the heel.  I also really like the lug pattern on the bottom, and was hopeful they would provide good winter traction.

The shoes also came with 3mm insole, which ultimately I removed for better ground feel. The outsoles are 3mm, with 5mm lugs, so without the insole, the thickness was close to that of my 6mm Contact huarches.  I probably would leave the insoles out, but I can see using them if you were new to minimalist shoes, or needed an extra layer of insulation against the frozen ground.. otherwise it just serves to muffle the feedback from the ground. 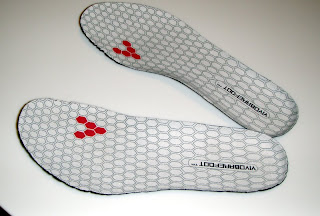 So, this morning I put them on to climb the Manitou Incline, and to make the run down Barr Trail (4.5 mi).  We had a lot of snow last week, and much of it was still around, but had been compacted, melted, and refrozen in many sections.  I left my YakTrax behind, hoping to see what kind of traction I would get from these shoes. In retrospect, I should have carried them along, but more on that in a bit.

Heading up the Incline, a good portion of it was covered with compacted snow and ice. 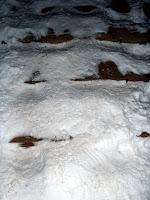 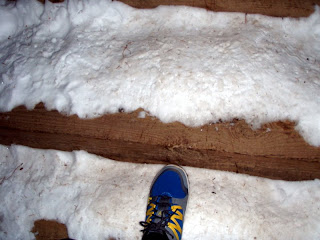 Here the Neo Trails performed very well..  I only had a slight slip in a few spots of solid ice, but otherwise the grip was strong.  Also, they just felt really comfortable... and warm! That was my other requirement.  I did wear Injinji toe socks this morning, but had a feeling that I could have gone barefoot in them without too many issues.  I could still feel the cold seeping up through the sole, much like on my huaraches, but that is the tradeoff for a better ground feel.

Upon reaching the summit, it was time to put them through a good trail run.  The Barr Trail from the top of the Incline is mostly downhill, with a few flat and short uphill sections.  At 6 am all the sections that had melted the day before had frozen over solid.  What I learned (some what painfully), is that as long as there was some kind of variation in the surface, the lugs on the Neo Trails would grab... but, on some sections where the ice had frozen some what smoothly, no such luck.  Granted, these are areas that you would only get traction on provided you had YakTrax, or spikes/screws etc.  What made it worse was that it was just starting to warm up, so the ice was developing a nice wet surface.

I did fine, taking it easy, until about halfway down. Things were feeling great and I picked up the downhill pace.. only to hit an icy section with no way to slow down.  Needless to say, I found myself laid flat out on the trail, wondering what happened :-).

Here's a few shots of the flat and down hill trail conditions: 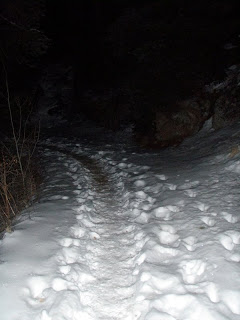 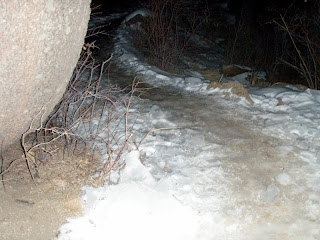 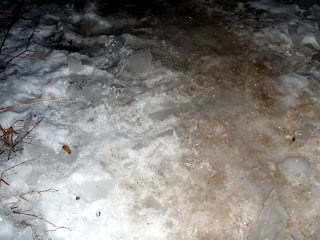 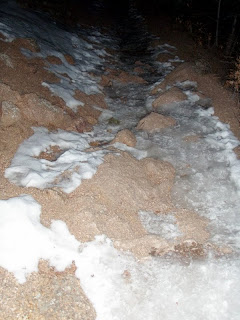 So, aside from the pratfalls I took on the ice, it was a good run down, and the shoes performed well.  In many ways, the ground feel through the soles was very much like wearing my 6mm huaraches, only with the extra protection and warmth around my foot.  This was helpful for those times that I would drag across a larger rock etc.  I was also quickly reminded of the minimal sole when I made a misstep, and stepped squarely on a sharp medium sized rock.. which promptly elicited an s-bomb...   (is it considered cursing if you are in the middle of the woods and no one is around to hear it??).  Anyway, that did a good job of reminding me that just because it felt like wearing a traditional shoe, I had to keep focused as much as in my huaraches or barefoot.

One of the best things about this test run was how great my legs/knees felt. Since we've had so much snow, I've been relegated to running in my old chunky heeled running shoes, and even though I worked very hard at maintaining the "natural" running style and avoided heel striking,  the fact that the heels were so thick, was creating bad knee pains that just continued to get worse.  I really wanted to shave them off! (the heels, not my knees). So, getting back to a zero drop shoe allowed everything to click back into place, and it was such a relief to run without pain.

So, there you have it... my first impressions of the VIVOBAREFOOT Neo Trails.  I plan to put a lot more miles on these, as we still have bit of winter to go.  After a few more months, I'll have better feedback on durability etc.  So far, the only negatives I have on these are the price of the shoes, and the cost to ship ($15!), too bad the nearest retail shop to Colorado is in New York City! But, it seems that, at least for now, quality minimalist trail shoes are going to be expensive.

If I've missed anything, let me know... I'd be happy to share my experiences.   I'll leave with the obligatory sunrise picture from summit of the Incline...  you all are probably getting tired of them, but I'm not!

Have a very safe and Happy New Year...   looking forward to a great 2012!  And stay tuned as I'll be launching the Happy and Healthy 2012 Contest next week! 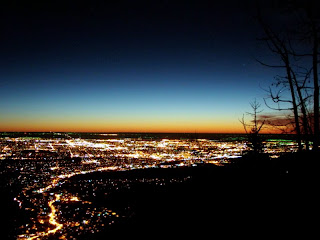 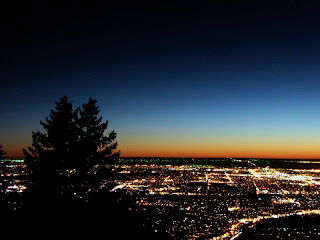