It would be impossible to talk about running, training, racing, early mornings, clown shoe contests, achievements, challenges, strengths or weaknesses without first delving into the “usual suspects”.  The trusty companions that make my mornings brighter, push me beyond what I ever thought possible, make a two or three hour run seem like 20 minutes and fully understand that there is no greater way to bring people together than a bit of healthy suffering.  My Mom was a huge fan of Miss Manners and taught us about proper introductions so allow me to introduce you to my people… 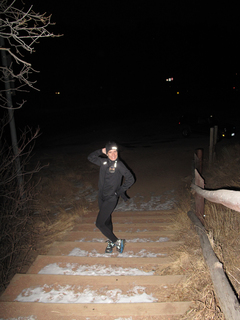 Susie is a wife, a mother, a runner, a yogi, a spinner, a chef, a hostess, a volunteer and thankfully for me (and the rest of this town) a terrific friend.  I have only known her since this past August but instantly felt like we had been friends forever.    Because she supports a household of four very active children all under the age of nine and Jim, her fantastic husband who shares her joy of the outdoors and a passion for cycling, our little group of runners tends to abide by early mornings to ensure we can fit in an appropriate workout that can include the incline, yoga, run, spin, Falcon, Waldo, Barr Camp, coffee or all of the above in her neon green Nike’s and rocking a circa 1980’s cell phone.  “Why not?”….right, Sus? Susie is our rock.  She doesn’t waiver.  She can operate on two hours of sleep better than most on eight.  She is strong, caring and never without a smile.  She LOVES to run but her passion is people…”I ain’t quittin’ you”…famous last words. 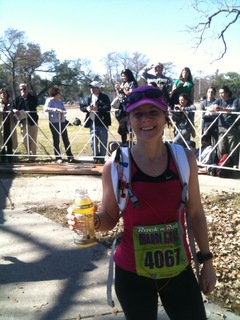 Danielle is a wife to Craig (see below), a mother, a runner, a yogi, a successful physical therapist, an entertainer, a coffee enthusiast, a jumping jack professional a self proclaimed princess, and a dear friend.  Danielle can send a text while making breakfast, curling her hair, dressing her daughter, feeding her dog and sending her husband to the airport with a homemade sandwich in his bag and that text will say, “love you, hope you have a great day.” Danielle is our cheerleader.  I will never forget one of our very first long runs together; the start was a comedy of errors.  I was scooped up by Susie and proceeded to step on my camelback nozzle and it emptied all over the inside of the car, Susie forgot her hat and gloves (it was snowing), Beth was running a bit behind and then we get a call from Danielle.  She had just been rear-ended on her way to the trailhead…she says “just give me a minute to collect myself and I’ll be there.” We all huddled in Susie’s van while we waited whining about our respective issues of the morning and not five minutes later Danielle pulls in, bounds out of her car and starts jumping up and down exclaiming “I’m so excited…you all ready…let’s go!”  That excitement never diminishes.  Ever.

Beth “the high maintenance one” 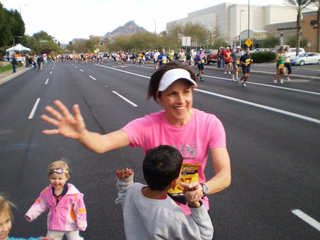 I will start by saying there is NOTHING high maintenance about this girl.  She gave herself this name due to some recent nagging injuries.  A better name would be Beth “the wild child” Bishop but I digress…

Beth is also mother (I am the only kidless one in the group), a wife, a runner, a teacher, a dental hygienist and a friend.  Beth doesn’t subscribe to the pre-run obsessing the way I do and I absolutely love her for that.  She enjoys her red meat, wine and beer, loves when a run fueled by what she calls junk food (not junk food at all by conventional standards) is stronger and faster than the ones in which she follows the “rules”.   I met Beth in the Zio’s parking lot one early winter morning and she intimidated me.  She was quiet and had a scowl on her face (I have since learned that this was her first and last scowl) but I figured a friend of Susie’s…she must be nice.  We start running, not a word from Beth…Susie asks how she is and without pause Beth responds, “I AM SO MAD RIGHT NOW, MY RUNNING PARTNER ONLY WANTS TO RUN DOWNHILL AND THINK SHE IS GOING TO BACK OUT OF OUR UPCOMING MARATHON.  Ok, just had to get that out…I feel better.”  Just like that, out came the smile that has since never left.  Her running partner didn’t run the marathon, Beth set a personal record in the marathon and aside from taking some rest days for her aching hip, Beth has made every weekend run since then. 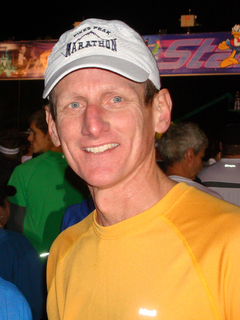 Dave is a husband (I’m the only single one of the crew…trendsetter I suppose), a father, a 27-year veteran of the US Air Force, a coach, a cheerleader (in his unassumingly quiet way), a Goofy buddy and a friend.  Dave and I ran the Goofy Challenge together in January 2010.  His claim to fame is his accidental Boston qualifying marathon performances.  He has yet to run a marathon without qualifying for Boston and never knows what time he needs…Goofy was no different.  The Goofy Challenge is when you run the Disney half marathon on Saturday and then the full marathon on Sunday.  He stuck with me through me and my constant photo ops on Saturday in the half and humored me on Sunday for the first few miles until the pacer with the 3:40 balloon’s came up on us and that was the end of Dave.  He not only stuck with them, he beat them AND qualified for Boston after running a half marathon the day before.  Any question why he is called the machine? Dave never complains, will meet you anywhere, anytime, anyplace and never seems to care about how early or how far.  Text or email a plan and his response, without fail is…”perfect.” 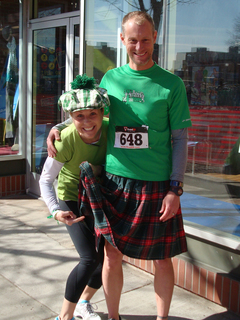 I have known Davin longer than anyone but he is the newest addition to the crew.  Davin is the husband to my BFF Cris, a father to one of the hippest seven year olds in Colorado Springs, an AVID biker, a racer, an entrepreneur, a dancer, a singer (kidding…just checking to see if anyone is still reading), a socialite, a fellow “Type A”, a fellow vodka enthusiast, my old neighbor and a terrifically loyal friend with an impressive inability to sit still.  He has been known to change the locks in my house and then break in and sabotage it while I am at the movies…all in the same day.  Ironic.  Davin is a biker.  Davin is not a runner…or so he says.  He can hang with the front of the pack, place in duathlons, run up gnarly trails such as Section 16, The Chutes, Barr Trail and Waldo as if they are quick, flat trips around a track.  You be the judge.  Davin is the comedian of the group; rarely a serious word comes out of his mouth and he always comes with jokes and stories (only sometimes true) to share with the crew.  I think his initial hesitation in joining us was the fact that we typically run before the sun comes up but he’s hooked, he knows it and he loves it and we may never be able to breathe again trying to hang with this runner. 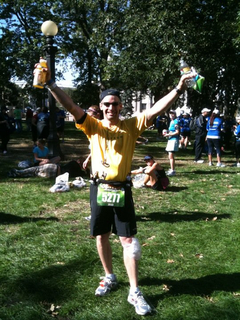 Craig is husband to Danielle, a father, a runner, a hiker, a gadget junkie, a swimmer, a talker (I mean that in a good way) and a friend.  Craig has somehow managed to hold on to the momentary excitement we all had as kids and is truly excited to be alive…all of the time.  I have to be honest; when I first met him I wondered if he was for real…I quickly learned there are very few people as real as Craig.  We were just together in Pennsylvania gearing up for a marathon (in which he set a PR) and we popped in the movie 127 Hours.  If you have ever seen the movie you know it starts with the alarm waking Aaron in the back of his truck, he bounds out of the truck, jumps on his bike squealing with delight as he hauls across the desert.  That is Craig…he even said “that’s ME” as we were watching the movie and giggled.     He can make a stranger a friend in under a minute and truly appreciates everything he does.  How many people can really say that?  Because of his carefree attitude, when something doesn’t go as planned...no matter how hard he may have worked for it, Craig can let go and let it roll off his back…just like a duck. For him it's as easy as a shrug of the shoulders and a…“oh well, maybe next time, we will just have to work a little harder.”  I can certainly stand to learn a lesson or two from this man. 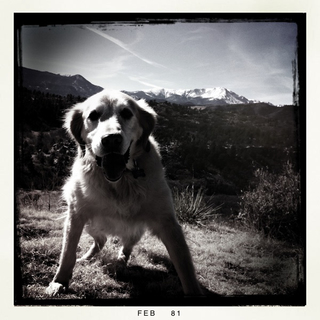 George is my 7 or 8 (not really sure) year old Golden Retriever who believes I am perfect in every way…sure have him fooled.  He never bails, loves the sight of running shoes no matter the brand, the color, the condition or the size.  He will do anything for peanut butter and will certainly lick and wag his tail at any intruder that would be interested in entering my house unwanted (don’t get any ideas).  Limited to less than 10 mile runs, he doesn’t get to go everywhere anymore, but I have been known to construct a longer run to have a stop in the middle to allow him to nap in the truck while I tack on a few more miles.  George was adopted when he was two-ish and has been running my life ever since.  Lucky me.

Stay tuned for Sonya & Jessica…my fellow insomniacs, the crazy mountain chicks who refuse to get up early, LBR and maybe (if I can dig up some appropriate pictures) we can meet Team DPW, making our appearance in Beaver Creek this June for the Tough Mudder.

Comment by Craig Spivey on May 16, 2011 at 12:51pm
Great Blog, and I am truly honored to even be mentioned with the rest of Cup Cake crew. Rock On Speedy Cup Cake!