Being a runner, I have tremendous appreciation for volunteers and also believe that everyone should aspire to be one as often as you can. I’ve received my share of kindness from many friends and strangers over the years, so I try to return the favor by paying it forward whenever I can. That is one reason I became a Court Appointed Special Advocate (CASA) for Children of the Pikes Peak Region about eighteen months ago.

I went to classes in the evenings after work for a couple of months to learn the processes and difficulties in dealing with kids who have suffered through neglect or abuse. I did my homework, met with mentors and was finally assigned a case in December 2014. Over the last fifteen months, I’ve spent many hours with my CASA kid getting to know her, her family, her foster parents, her lawyer and her case worker. I advocate for her best interests and follow up with the court, but mostly I just try to be a constant, loyal companion that she can trust. Meeting someone who hasn’t had that type of person in their life can be both humbling and frustrating. I’ve attempted many activities to gain her trust and I try to use my only real skill – humor - as often as I can, even when the topics turn deep and serious. We have a great relationship and I think she enjoys my company and values my advice.

While I’m certainly no parenting expert (just ask my own kids) and I don’t have all the answers in helping troubled youth, I can tell you that as a runner, the skills that I have learned on the trails have been incredibly beneficial on this CASA journey and I often lean on these lessons as a playbook on how to help others. Running is therapeutic and can cure many ills, both physically and mentally. 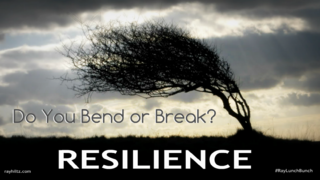 Being involved in a true neglect and abuse case, I would never say that running can compare to the many horrors that unfortunately occur in some households every day. However, in a distant correlation, I can say that having the fortitude to withstand suffering and develop the resilience to keep moving forward can most certainly be found on the running trail. This lesson is one that kids in the foster care system must unfortunately learn in a much harder fashion. These are kids that have been knocked down in one way or another and now have to find the courage to stand up, believe in themselves and succeed in spite of their past. In a sense, they have to learn to keep running.

I told my anti-running CASA kid that if her grades didn’t improve, I would sign her up for the Chasing Santa 5K with me in December. Alas, despite initial success, a late nose-dive in her academics earned a spot on my personal 5K team for just the two of us. She whined a little before and a lot during the race – especially about having to wear a SO unfashionable Santa suit on the course, complete with beard to attempt anonymity. In an additional turn of horrors, I also dragged her on stage with a running buddy of mine for a rousing karaoke version of Grandma Got Run Over By a Reindeer before we started the run.

In bringing her into my running world ever so briefly, I was able to show her the best of a community she had never witnessed. I showed her how shared experiences can bring people together rather than tear them apart. She watched me interact with people from various backgrounds and abilities and still give hugs to them all and wish them luck. She saw the camaraderie along the course and heard people cheering for her that she’d never even seen before that day. She saw the good in people, which contrasted sharply with what she’s seen so far as a child. When the crowd went wild at her last sprint, I actually caught a large smile, even underneath the beard. I can say that in the moments when she thought she couldn’t go any further – not because of physical ability but rather lack of mental fortitude – it was rewarding to be there to encourage her and sprint alongside her eventual push to the finish. 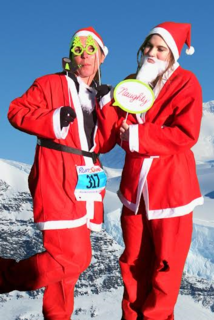 I met with my CASA kid tonight after being gone for a few weeks and was amazed at how far she’s come over the last year. Her grades are apparently good, she appears happy and seems to be finally adjusting to a new, secure life with a loving family. She is learning to trust, learning to try and metaphorically running well on her own. I hope that I am once again sprinting with her to a fantastic finish and even better future.

I try to draw parallels to struggles I’ve had in my own life, though none would compare to the severity of her childhood experience. However, I can say that the confidence, familiarity and challenge of being a runner has proven key to much of my own success and sanity. I sincerely hope that even if she never actually runs again, she remembers our little 5K and continues to push forward on the path to prosperity. I hope she’s learned that she can accomplish anything her mind can imagine. And if she hasn’t….well….there’s always the Waldo Waldo 5K?