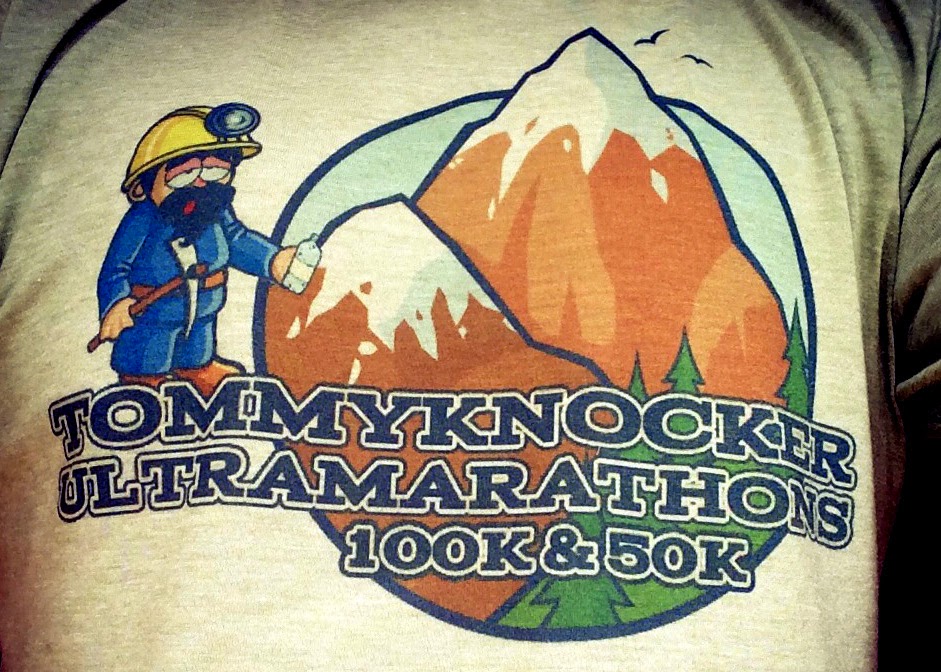 My new favorite t-shirt!  Well, after my INKnBURN gear of course :-).   It's official, I completed my 2nd 50K this weekend, and it feels great!

As you know, I was just a little worried going into this one, as I hadn't followed a super strict training program like I did for my first 50K back in May.  I was happy to learn that I really was ready to push myself for almost 34 miles, with a new distance PR and time on my feet PR :-)

This was the inaugural running of the Tommy Knockers 50/100K, and the first race for theHuman Potential Running Series.  While the race did have a few glitches (as to be expected), I felt that it was really well run, and such a great adventure!  I am looking forward to this one again next year, as well as all of the other races on the calendar for HPRS.


The volunteers were amazing! And, it was so cool that one volunteer was fellow INKnBURN ambassador (and 10 time Leadville 100 Finisher) Laurie Nakauchi!

Before I give you the blow by blow details, I will note that the biggest glitch in the race was really not preventable. It was unfortunate that a property owner who lived along one of the roads/easements wasn't happy with having a race going by, and ultimately harassed 100K runners, and painted wrong markings and moved tape markers to throw off the course, causing many 50K'ers to take a wrong turn and run up to 6 more miles in total after getting turned back around. The response by the race crew to get everyone redirected, and to deliver extra water on the trail was great.  I can't say enough about the support.  Also, to RD "Sherpa" John Lacroix's credit, his very detailed runner's manual (and pre-race meeting) both emphasized that although all efforts were made, as ultra runners we were responsible for knowing the course, AND the manual noted that vandalism could occur.  I was running with a map, and although I wasn't impacted by the vandalism, I did need it in order to stay on course around mile 26.

Oh.. and since I'm sure you are dying to know.. I ran this race in the B2R Trail Performance, the same shoe I ran my first 50K in.  And they performed flawlessly! I brought backup shoes, but didn't need them... 9 hours on my feet, 3 deep water crossings, and getting rained on, and my feet still felt great and I had all the traction I needed! 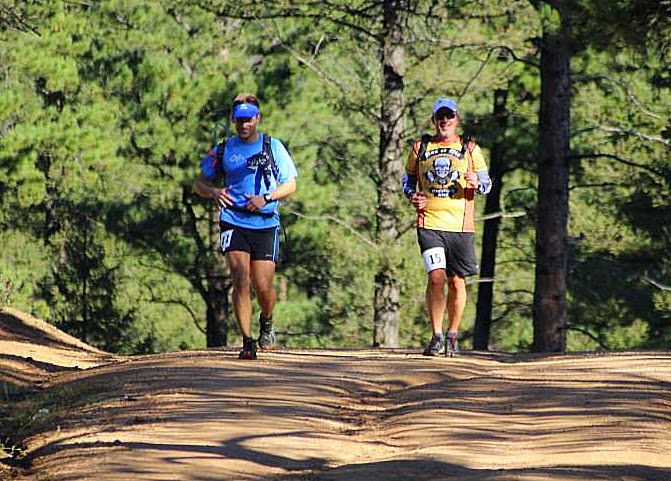 So, off we went at 8 am to the sound of John striking a huge rock with a pick axe!  The first part of the course was up Painted Rocks Rd (dirt road), but then turned off onto the network of Forest Services roads/trails in the Pikes Peak Ranger District.  I met Mike (above) early on in the race, and we ran together until the 2nd aid station around mile 8.  For trying to acclimate to the altitude (he came up from Texas) he did awesome!  The pic above was coming into the first aid station after a lot of climbing...  we joked that we had better be running in the pic :-) 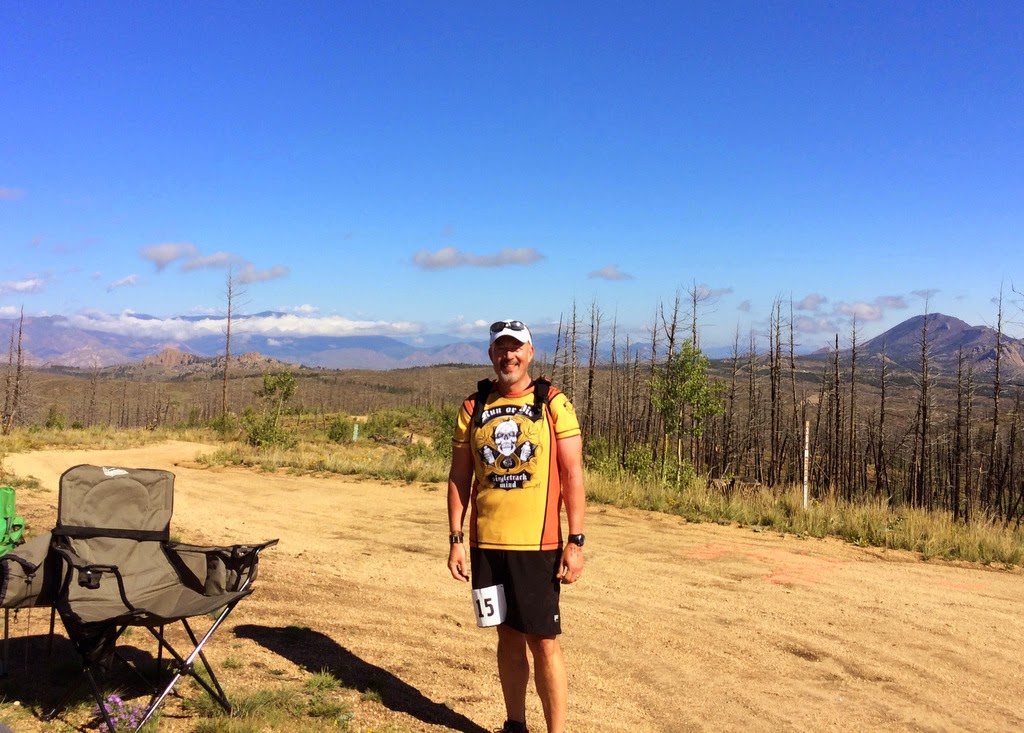 This was at the Mile 8 aid station.  It was such a beautiful morning and beginning to warm up. I dropped my arm sleeves off at the first aid station.  Everything was feeling good, and the trails were great.  Compared to my first 50K, I felt like I was staying well ahead on my hydration and fueling.  Plus the food at the stations was great.. snagged some plantain and banana chips here that were perfect! 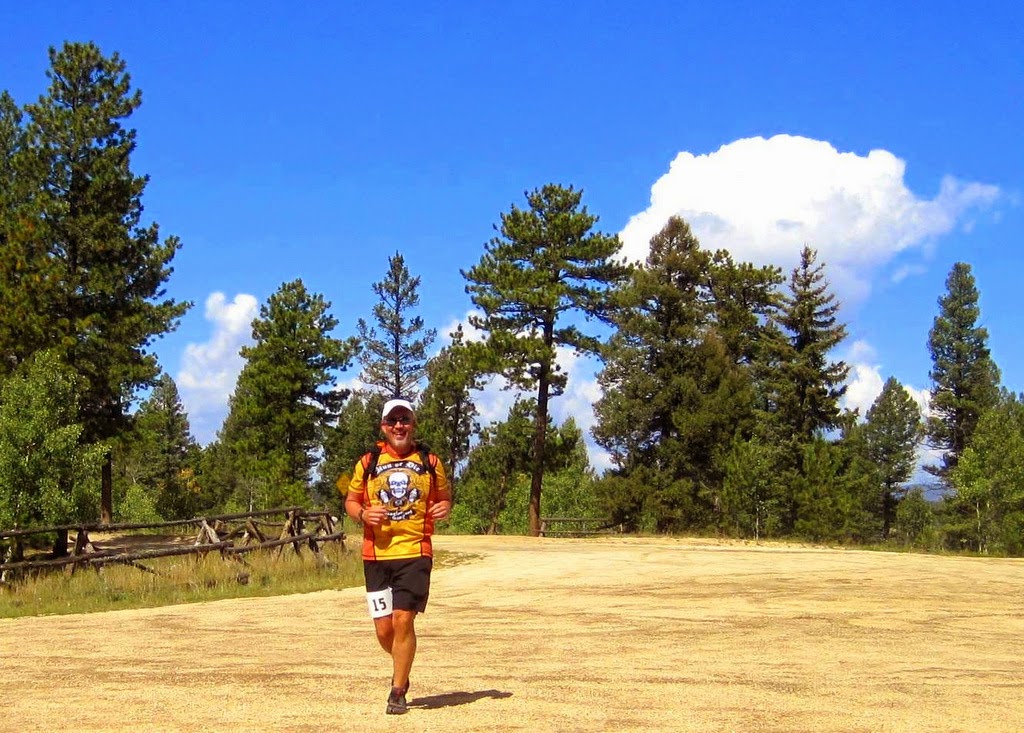 Coming into the Mi 13 aid station, I was still feeling pretty good.  The trail didn't have as many steep climbs in this section, but a lot of rolling hills.  The thing about this course was that there seemed to be very little flat! It was either up or down....    I fueled up at this station, grateful for an ice cold bottled Starbucks Mocha that my friend Matt (working at the station) had stashed for me...  that really hit the spot.  He brought beer as well, but I just wasn't feeling it so had to pass :-)  I snagged some Mama Chia pouches from my drop bag, as well as a USB charging stick to boost my Garmin.. I knew  I would be pushing the limits of the charge on my watch and wanted to keep it going.

After this, the next aid station would be just past mile 21, so one of the longer hauls on the course. I was a little concerned about this leg because it is in this zone (mile 15-21) that always seem to hit a wall or low spot.  I anticipated this happening here, but I'm happy to say it didn't! I think much of it has to do with fueling and hydrating earlier (rather than when I really felt like I needed it). Also, it was during this leg that I caught up with a group of runners that were ahead of me.. I was confused at first, but when I got to one of the turns on the trail, I found out that they had gone the wrong way (due to the vandalism I noted earlier) and were just getting back on course after running an extra mile or 5 depending.  I assured them we were headed on the correct path (I had ridden the course a week earlier), so we all headed on down the first really steep descent.  During this drop I had a chance to chat with a nice lady that was in her 20th year of running ultras!  So cool...

Once we reached the bottom we had a water crossing (first one I got my feet wet in), and then started a really arduous and steep climb up the other side. 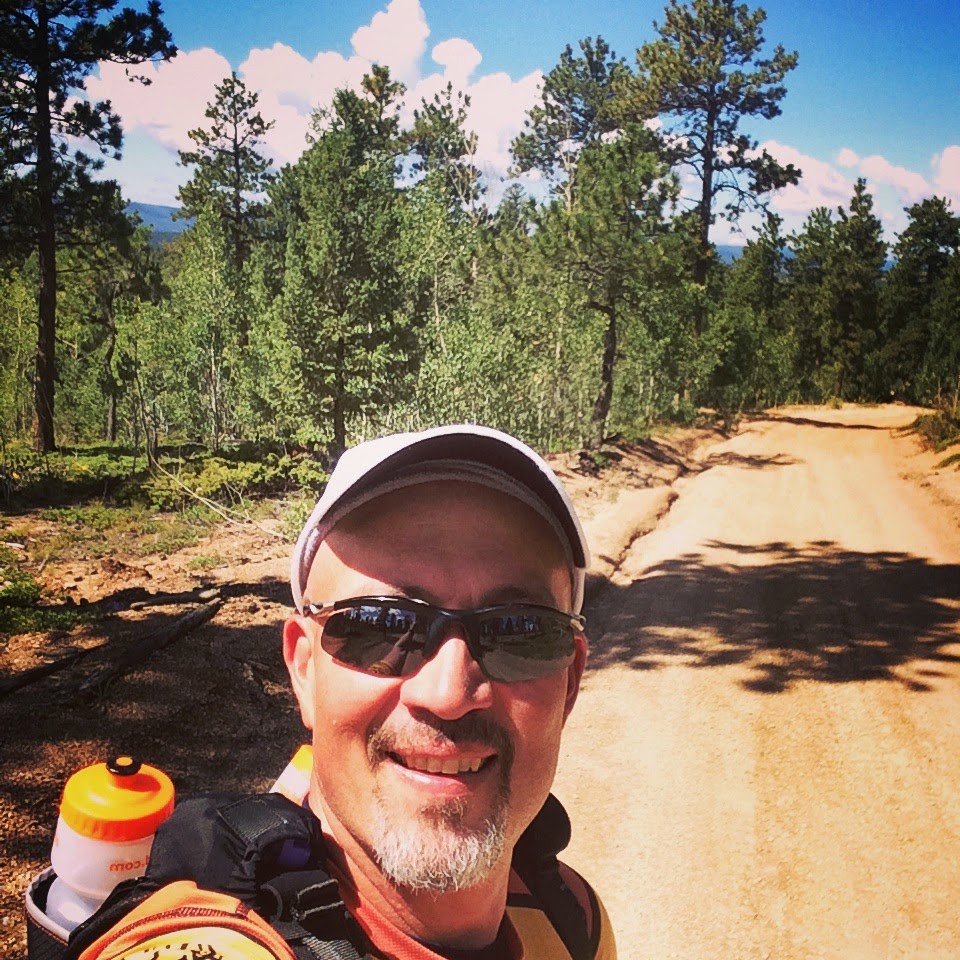 Finally hit the aid station at mile 21 and took a little extra time to grab a sandwich, more Coke (I know I know... terrible stuff, and the epitome of processed junk, but dang it works for me in an ultra!) and a few more Mama Chias from my drop bag here.  I was feeling great here because I was pretty certain I had avoided my normal low and was gearing up to keep going. I was also posting pics to Instagram while on the trail which was fun.  But of course my phone eventually died, so anyone following may have thought I did too! 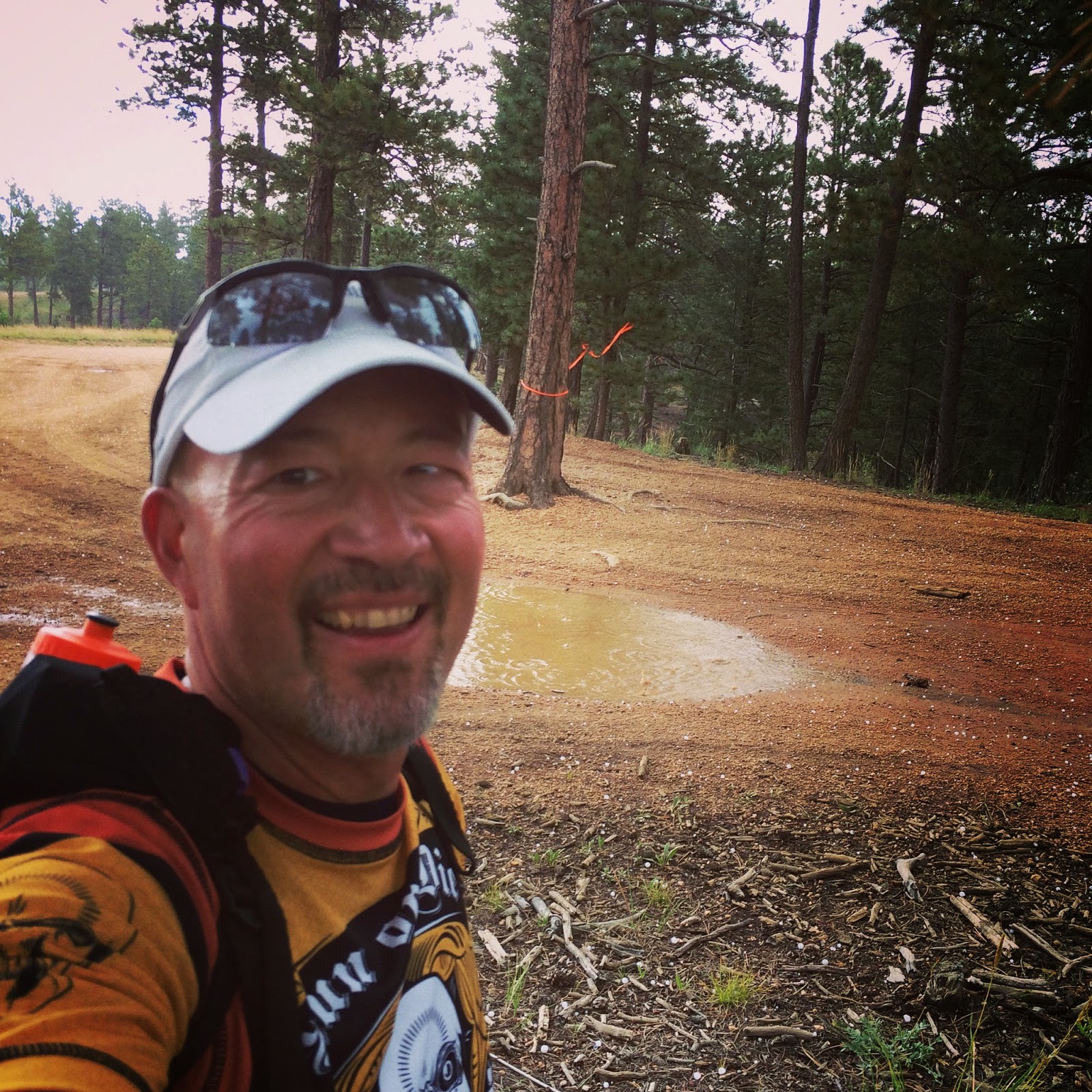 While the day was beautiful, it was also a typical Colorado day in the mountains.  By the afternoon, clouds rolled in and so did the thunder and lightning.  Around mile 23 the hail started dropping and the wind picked up. I got nailed with a quarter sized hail chunk right on top of my head! I ducked under a tree (which didn't help much) and hung out for 5-10 minutes for the worst of it to pass. I was starting to feel a little beat down at this point, but then I had to stop myself and say... "You are running an ultra marathon!!  This is AMAZING!!"  Which brought a smile to my face, and the edge off the pain. 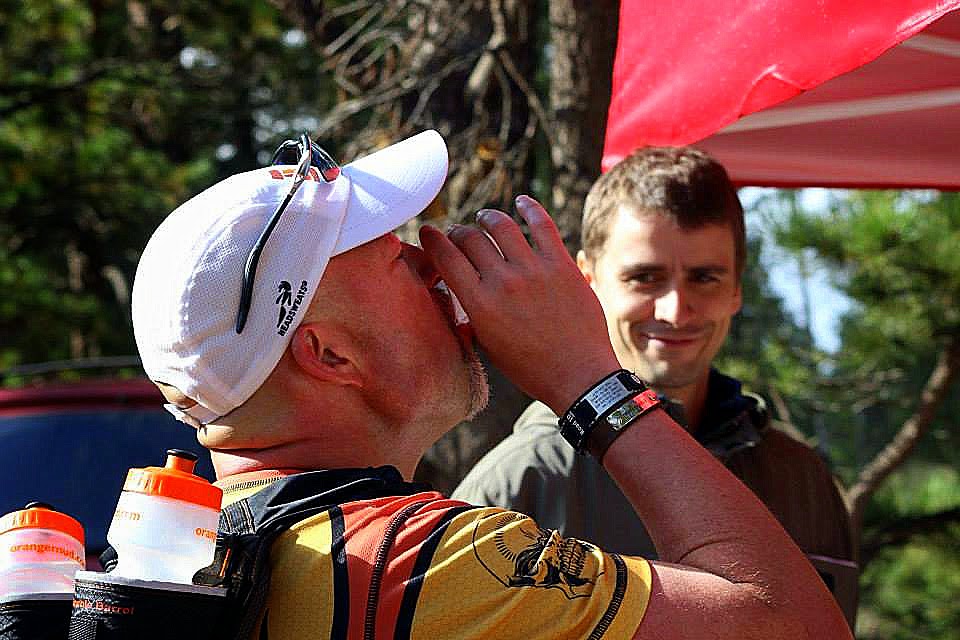 After several more grueling climbs (5,100 ft overall on the course), a sun break, more heavy rain, and almost getting lost (took one wrong turn, realized it after .25 mi, consulted my map and got going again), I finally hit the final aid station close to mile 30.  Felt so good knowing I was so close! I enjoyed some hot broth that really seemed to bring me back to life...  followed by a shot of some awesome Moonshine corn whisky!  That was some good stuff... and off I went with a big grin on my face. 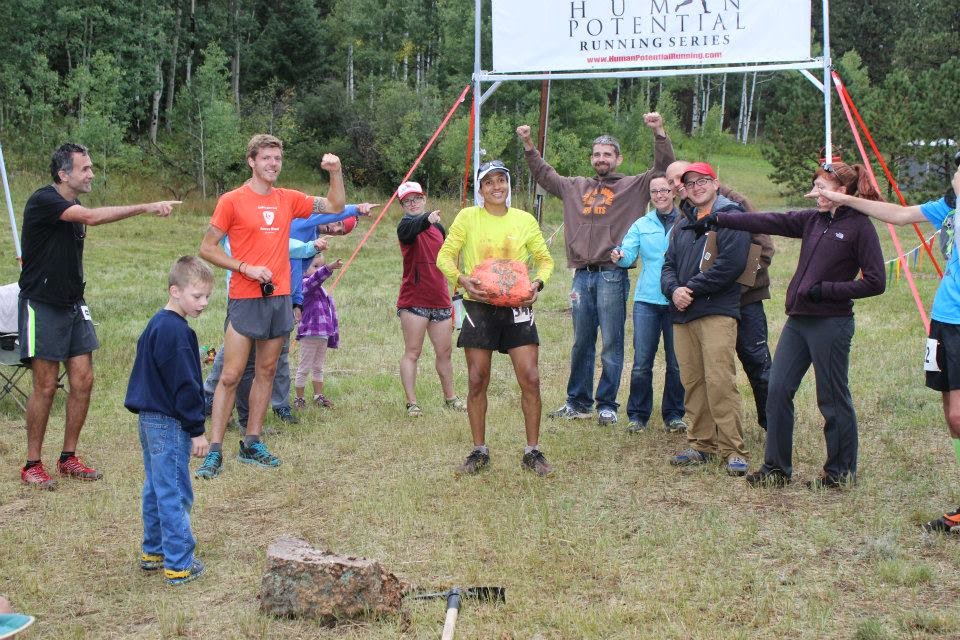 So.. as I finished the last 3.5 miles (downhill!) I passed Othman who was struggling with a 50 lb rock... why? Because whoever found this marked rock.. and carried it over the finish line would win $250!  And that is exactly what he did.. taking almost 3 hours to cover that last 3.5 miles!  That was so amazing! 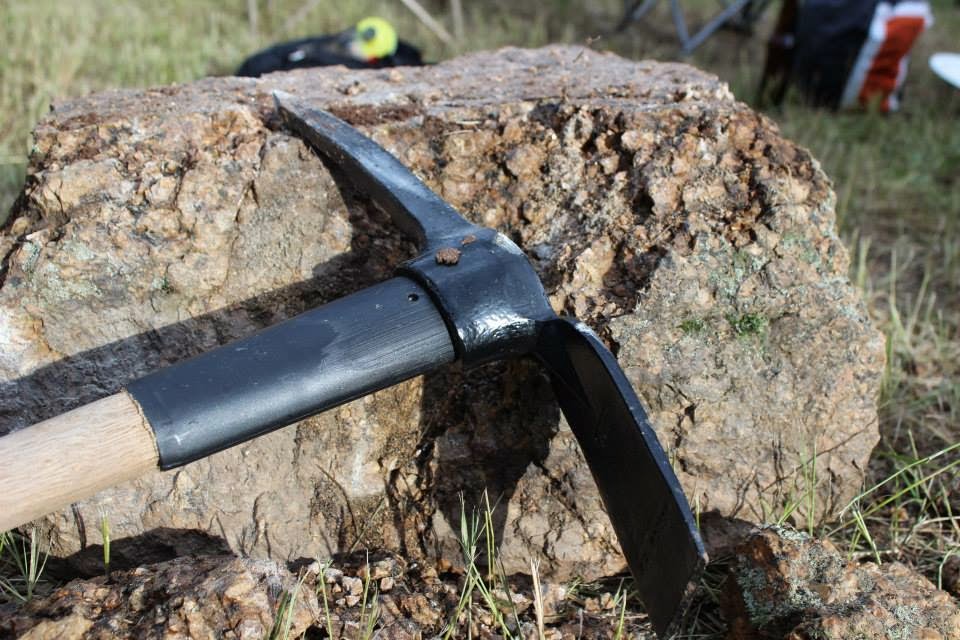 I finished the day by relaxing with some terrific BBQ and other munchies while we waited for the rest of the 50K and 100K runners to finish.  I ran 33.8 miles, and spent 9:08 on my feet, and didn't sit for the two+ hours after the race.  I met a lot of great people, made a lot of new friends, and just had a blast.  I can't wait to run this one again next year... maybe the 100K?

I am so looking forward to future races from Human Potential Racing...  Check out their next race.. the Indian Creek Fifties by clicking HERE.

And the best part?  I woke up the next day feeling better than I have on days after running half that distance, and was able to run a few recovery miles as well.  And that confirmed it... I'm going for 50 miles in 2.5 weeks on 9/27!  Wish me luck, or call me crazy.. either works! 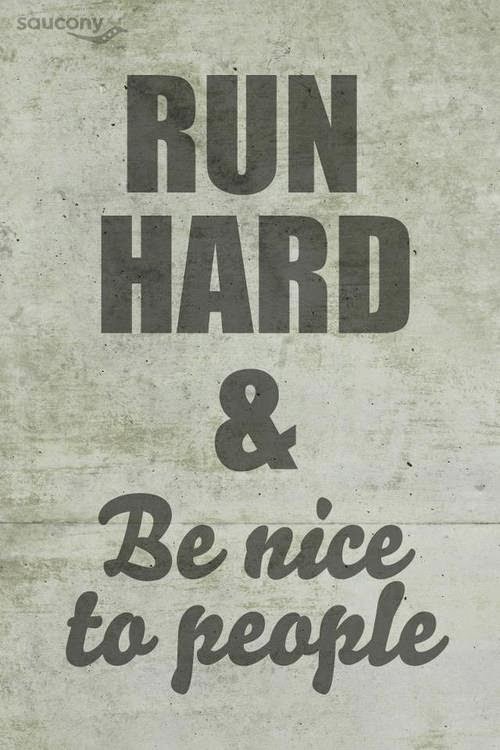