Heuberger Motors is sponsoring the Pikes Peak Triple Crown of Running this year and we are actively participating in the races! I’ve joined the Pikes Peak Sports Runners or the “Mighty Marmots” as we’re known. Here’s a little re-cap of the last race! July 14 was the second race in the Triple Crown of Running Series for the Mighty Marmots. We gathered early in the morning before temps got uncomfortable. It was a beautiful morning for a long run which was how I have been approaching the series. My ultimate training goal is the Moab Trail Marathon in November so mostly, I am supposed to take it easy on these races and treat them as training (that’s what coach Scott Johnston over at Uphill Athlete recommends to me, anyway. That’s the theory anyway; then there’s the reality which on Sunday was that I forgot my training watch and had to try and run the Summer Trail Round-Up by perceived exertion. This proves difficult when there’s a pack of ten other runners bunched up behind you  or in front of you and race fever starts to take affect.

Despite these setbacks, I was only 4 min off of my goal time of 2:45 with a total time of 2:49:27. Not great but I tend to be really slow during summer runs in the heat. I’m not sure if it’s just me but it takes a really big toll and makes my heart rate cruise up over Aerobic Threshold really quickly.

Anyway, the other Marmots and I hung out before and after the race and it was awesome to see Ryan Chelstowski, Ryan Hewitt, Nikki Demmers and Sheva Willoughby all out there. They were all faster than me so I assume they had a great race.

Ryan C and I ran together for a good chunk of the course as we both had similar projected finish times and he helpfully reminded me I was going to fast at the front end of the race. I felt great and just wanted to giddy-up.

Once back at the finish, we hung around the Heuberger Motors booth and took advantage of all the recovery stuff we brought for ourselves and other runners to use. We had some comfy mats, foam rollers, lacrosse balls etc for runners to get a head-start on post race recovery. It was cool to chat with the other racers while rolling the miles out of our sore muscles. 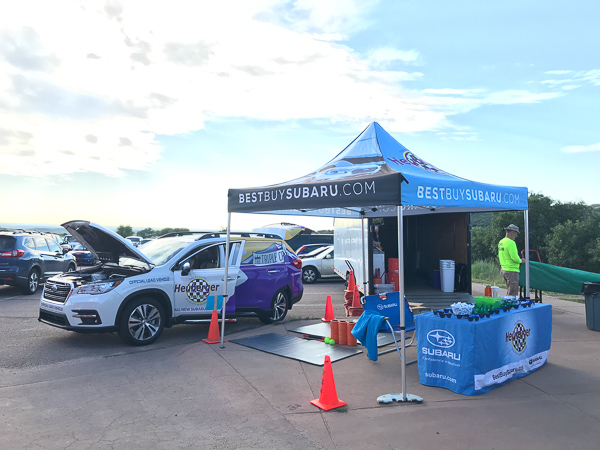 The overall tone of the day was kind of laid back and oddly relaxing. We all really enjoyed this race!

As you can tell, I looked pretty rough compared to my teammates! Oh well. 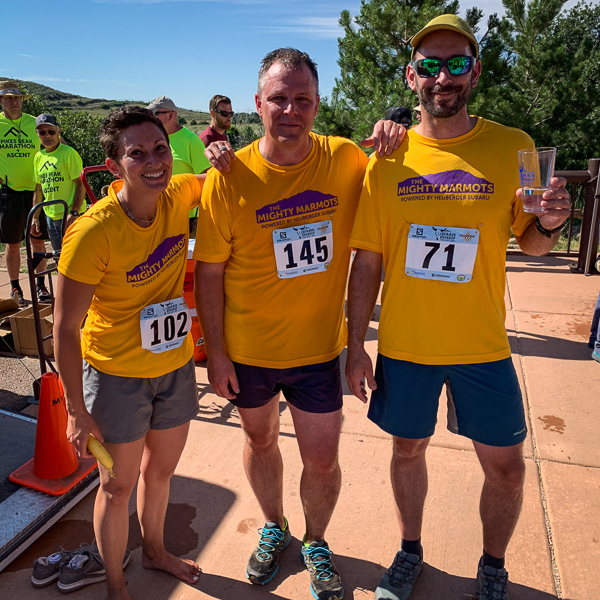 With only the Pikes Peak Ascent/Marathon left in the series, my own training it taking on a bit of a steeper tone these days. I’m trying to get as much elevation gain in weekly as possible leading up the final event. Last week, that meant climbing the Grand Teton up in Wyoming and this week it’ll be just a lot of gain in Cheyenne Canyon and maybe some other 14’ers on the weekends.