I'd say august 16th and 17th are arguably two of the most highly anticipated pair of days for the MUT runners of our state. You've got the famous Leadville 100, TransRockies, and our own local yet internationally renowned Pikes Peak Marathon and Ascent.

I've run a bunch of races and I've had a lot of super cool and memorable experiences throughout high school, in college, and now post-collegiately, and this one undoubtedly makes my top 3. First and foremost, it was my first race in as a member of a U.S. Team, and earning a spot on one of those has been a goal since college. As such, for the last 6 weeks an awful lot of mental, emotional, and let's not forget physical energy went into gearing up to run up that mountain as quickly as possible last Saturday. If you're in a USA jersey, half-assery on any level is just not acceptable in my opinion. Not only that, but on a more personal level, after an epic blow-up of my own making at the Loon Mountain Race (the USA Mountain Running Champs) where I'd hoped to earn a place on the U.S. Team headed to Italy next month, I kinda felt like I needed to prove to myself that I still had "it" and that I hadn't just abruptly become a total weenie. And finally, I got to thinking a couple of days pre-race that exactly 1 year ago from last Saturday, I was up in Vail getting meniscus surgery, which sort of sucked, and what better way to celebrate 1 year post-op than by crushing up a mountain? Yeah I know, I couldn't think of a better way either. 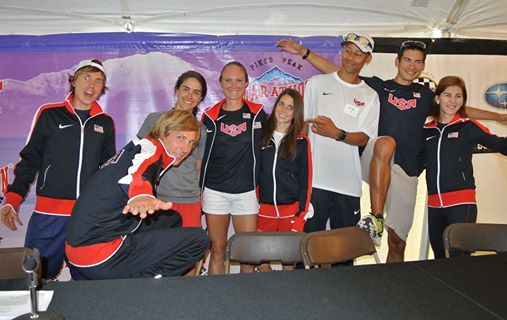 So the race. Like I said before, this year's Ascent doubled as the World Mountain Running Association Long Distance Championships, so for anyone wondering about the legions of foreign teams toeing the line, that was why. I'd met some of the Brits and Germans and Northern Ireland teams in previous days up on the mountain, and I think the Aussies were my favorite. At the press conference they informed the crowd that their team's strategy for dealing with the impending altitude featured within the race was just to "ignore it and pretend like it's not there." Hey, sounds like as good a strategy as any I guess.

Speaking of the aforementioned legions of foreigners, it was super cool to meet all of the Italians and and Irish and Germans and Brits and Aussies and Canadians and Slovenians and all of the many other abundantly wonderful humans and who can forget BART YASSO?! Yes, among other things Bart has written a kickass book (My Life On The Run, check it out) and has also run a race naked, which you will have to read his book to learn about, so I thought meeting him was a bit like meeting the President or something, only way cooler. 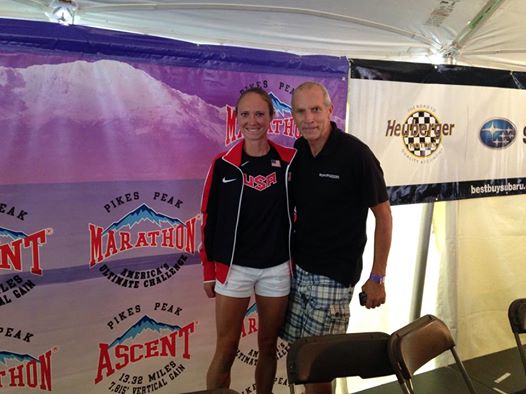 Okay I'm digressing. Back to the actual race. I wouldn't say that the better part of the 2 weeks leading up to it were perfectly ideal with a hamstring and foot niggle, but you can only control so much and by that point you're not going to gain or lose much regardless, so training went reasonably well all things considered and by race day I felt fantastic thanks to the efforts of Kelly and Kelli at Synergy PT (shameless plug) and Simon Gutierrez.

I was crazy nervous (as usual) for basically like 3 weeks leading up to the race, but on actual race day I was more excited than anything, I never even morphed into my normal insomniac self for the whole week of the race, which never happens so that was cool. I think it was maybe a realization that I had after Loon where I realized that you're only going to run as best as you're capable of running. This sounds totally dumb and obvious, but it's not like you're going to go out there and suddenly have to magically muster up something that doesn't exist, all that you can do is the best you can do and that's all that's there, and you've done the work, and what's there is there, so what's the point in worrying about it? I'm not sure if I explained that well, but all this is to say that for some reason that realization took a substantial amount of anxiety out of the whole thing where usually there would be a lot.

Anyhow, it spread out really quickly at the top of Ruxton and I felt really awesome all the way up the W's, where I ran a lot of it with Allie, who was employing her unorthodox but obviously super effective sprint-then-hike-then-sprint-then-hike tactic of handily beating everyone up the mountain. I watched her do it at Loon too and it's hilarious. She might be one of my favorite people to watch in a race. She took off at the top of the W's where it levels out somewhat for a while, and that was the last I saw of her, and then it was me and a couple of guys all the way up to Barr Camp. I still felt really, really good going into what I consider to be a very hard stretch which is the 3 mile climb from Barr up to A-frame. It never seems all that far, maybe because you're concentrating on picking your way over rocks and roots and steeper sections, but even when I was just running Pike's on training runs I always felt like I would start to struggle in the same place every time, which is about a mile beneath A-frame, and race-day was no different. Right around there I went from feeling really strong to knowing I was going to have to bite the bullet pretty hard for the remaining 4 miles, and that all happened in a span of about 10 feet, my hip flexors and quads started to get pretty crampy and right around there was when Morgan climbed past me, so I'm not sure if she sped up or I slowed down. But either way, I still really wanted us to win and thought it'd be really cool to go 1-2-3 so I just told myself that there was "only" a little over 5k left so get moving. The last 3 miles is pretty tough and seems to go on for a long way, and I don't remember a lot of it other than wondering who gave 16 Golden Stairs such a magical, enchanting sounding name, because there is nothing magical or enchanting about them, and I can definitely think of plenty of other names for them and I would be happy to replace the sign up there to label them more appropriately. 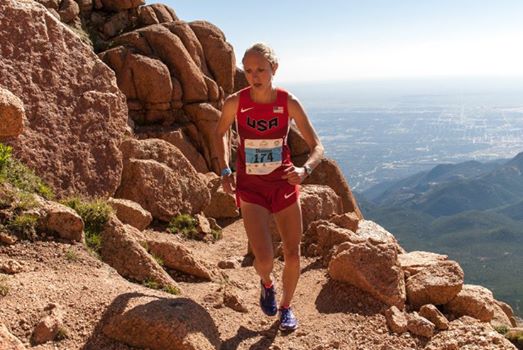 So we did win and we did go 1-2-3 so I was pumped as soon as I could get up the energy and brain function to be pumped, and Stevie was 5th after racing (and winning) the Sierre Zinal marathon in Italy last week, so no small feat.

So far, this was honestly the hardest race I've ever done, and while I was hanging around at the summit watching others stagger through the finish in various states of hypoxia, I thought to myself that I probably wouldn't do it again, but that's a load of crap because on the ride back down from the summit I was already trying to think up different ways to do it better next year, so....yeah.

Aside from the awesome fact that USA's men and women got the win on "America's Mountain," and the awesome fact that Allie and Sage both won individually--and I can't really think of two more deserving people--there is another equally awesome fact in that the top 3 overall finishers from this race are qualified now represent the U.S. again at next year's WMRA Long Distance Championship. It'll be the Zermatt Marathon in Switzerland, so I've never trained for or done a marathon, but it sure looks like it's on the docket now. 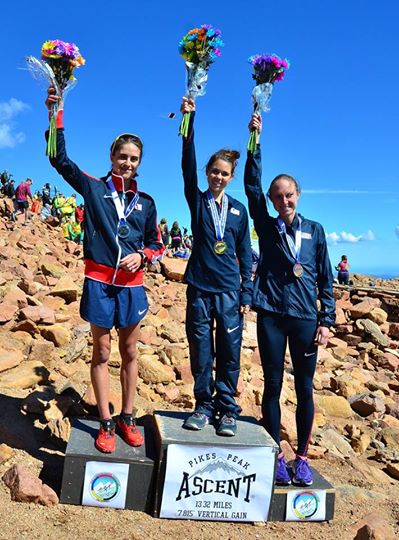 It was a good day on Pikes Peak. 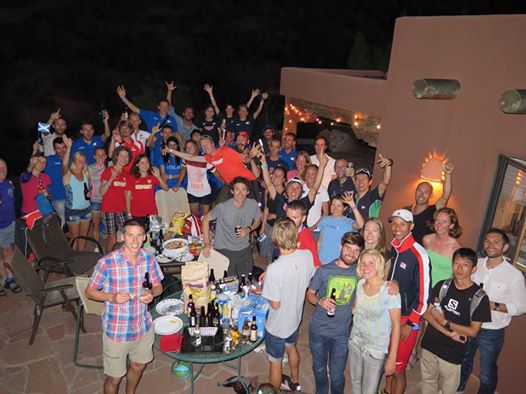 So for now I am taking a short hiatus, it's only my second day off but I'm already sort of bored and antsy to start running again since it's about time now for my other favorite season--cross country--to get going.

So thanks to all who made this race (and this season for that matter) a good one; all the volunteers and folks who worked the Ascent and Marathon (I vaguely recall an aid station with beer, but we were pretty far into the race at that point so I'm not sure if that really was beer or if I just thought it was) because that's a huge job, Nancy Hobbs for getting the U.S. Team all set, and Taskmaster Cody for all of the great workouts.

So anyway, unrelated to the race but still deserving of a mention, on the way back from awards I found this small dinosaur: 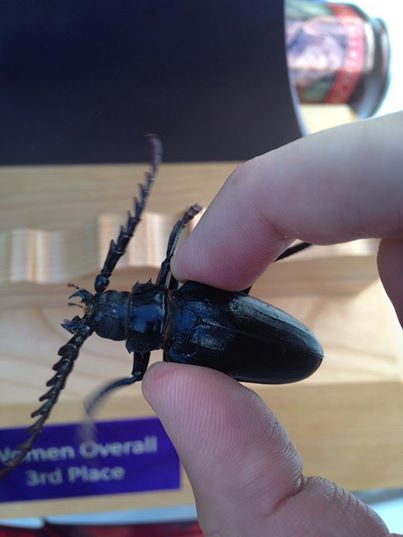