On Downtime and Marshmallows

This is due to the fact that I'm on hiatus. I had this great plan after Pikes of taking a week or so nice and easy, since I hadn't done that since a year ago, then gearing up for the USA Trail Half Marathon Championships in Washington next month. Neither of those things came to fruition. A week easy wound up being 5 days because I was all antsy and amped up, then I started back up and had some runs where I felt all marshmallowy and elephant-like and my IT band was slightly grumpy, which I ignored, then I had this one random day when I felt good and got excited, then after that I had this one workout where I felt like I had never experienced anything resembling leg-speed in my life, then I promptly blew up my grumpy plantar that's been grumpy since early spring, then I shuffled through a couple more jogs where all that compensating just made my IT Band join the protest even louder. This was all in a span of about 10 days. So it's almost like Body was asking (impolitely) for a more legit break, and that I should quit for a little bit while I'm still ahead. At least, I think I'm ahead.

So I took a break. Well, my version of a break anyway, which has always included this game of racking up as many hours per week that I can sanely handle cross training. It goes like this: I come up with this arbitrary number of hours that isn't based on any physiologically-proven-anything-whatsoever that I absolutely HAVE to hit by the end of the week, then the next week I try to surpass that number a little, the next week surpass the week before, and so on. And it's like, if it's Sunday night and I'm like 20 or 30 minutes short of my Goal Arbitrary Number, then I will actually go out into the garage, even if it's 10 at night, and spend that additional time on our stationary bike. It's weird and makes me feel like a crazy cat lady who surely spends her spare time counting the threads of the carpet or separating enormous piles of buttons or puzzle pieces into groups with identical hues and shapes (I don't do this. Really.) or something in that range, but hey at least I hit the number! That makes my inner Type-A Monster purr like a tiny wee kitten getting its cute, fuzzy, little tummy rubbed.

Now don't mistake this for "dedication" or "work ethic." I mean, I guess that's a piece of it. Didn't someone once say, "Somewhere someone is training when you're not, and when you race him/her, he/she will win"? Thanks a lot, Jerk-Who-Said-That, way to get us all to overtrain. But mostly, I absolutely cannot stand the idea of working so hard all those months, only to lose all of that ground while being sidelined, so I like to play this game with me called How Out Of Shape Can I Not Get While Not Running?

Then, I confess, maybe it's because I am a girl or it's just because I run or because I am a girl who runs and am therefore surrounded by teensy weensy, little bitty, lithe, transparent, gazelle-like, elfin women who run, which is totally fine and I'm totally not criticizing, but none of the above attributes particularly describes me and I more closely resemble a tree trunk with a balloon for a head. I shouldn't compare though, and I am grateful for what the body can do, but that doesn't stop me from feeling like a behemoth on most starting lines at most races. So for that reason I harbor a fairly intense fear of time off resulting in me morphing into this: 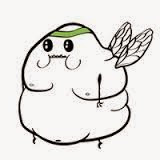 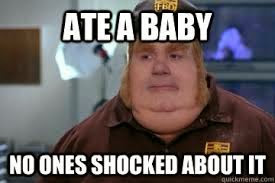 In other words, I truly fear becoming a marshmallow whose state of marshmallowyness can never be reversed or undone.

Plus, I'm a 75-plus-or-minus-5-miles-a-week girl, that just seems to be what I can handle, and I feel like everyone else are triple-digit-a-week-types, so it never occurs to me that I deserve downtime anyway.

Nonetheless, in spite of all of these things, this time around was a little different. I had a couple weeks where I succeeded in my silly self-imposed little game, but motivation was seriously waning. If I wasn't running, I didn't really want to do anything except eat cupcakes and take naps, and I was practically searching for an excuse to not do anything except for that I feel like I CAN'T not do anything. It's complicated. It throws everything off. It makes it so that I can't even figure out when or even if I'm supposed to shower because I didn't spend half the day marinating in my own sweat. It makes me feel....like a marshmallow.

And these are just some of the useless things I fret about. Ah, runner angst.

So I kept on, but it didn't come with the same weird satisfaction that I usually obtain from completing my mission of attaining my Arbitrary Weekly Number and writing it down at the end of the week, but doing it still temporarily scratched that everlasting invisible itch of epic proportions. Still, I don't usually have any trouble dragging myself into the pool or onto the bike to sweat it out for a couple hours and I'm always glad I did it even if it is hard and extremely boring. This time I just eagerly counted down the seconds till I could be done, then when I was done I would just think about how much it sucked, and then dread the next day when I'd have to go do it again. Plus, I was more tired than I am whenever I'm running. So, this radical idea of "Just Take Some Time Off" was introduced to me by a few people. And I couldn't believe it: "time off" meant "time off." And another thing I couldn't believe was when I heard that many highly successful runners do in fact take "time off." I've heard of this, but I've always assumed it was sort of mythical or that those who partook in occasional stints of Time Off were so talented that they didn't have to worry about getting out of shape or marshmallowy anyway. And if it's ever been a coach suggesting time off I always suspected it was part of some sort of twisted plot or scheme wherein he was assessing whether or not you are a slouch, and if you'd really give into taking time off. As such, I haven't really ever given into what I see as the Siren's Song of Time Off.

I can count on one had the number of times I've legitimately and intentionally done nothing for longer than a couple of days at a time and it was always because I actually couldn't do anything (like after knee surgery and a couple times over the years when I caught the Plague and was basically dying or whatever). In college, after the season was done, time off usually just meant several days of easy runs and no workouts. I've usually just kind of kept everything going in a continuum of races and seasons interspersed with occasional injuries or other bumps in the road, which I would then consider to be my "off season," when I would resume my little game of trying to not get out of shape while not running until I could run again. So needless to say, the sincere suggestion of actually not doing anything for a short time really boggled my mind.

So right now I'm on day four (it would be six but two of those days I couldn't stop myself) of I'm not sure how many more I can manage, and I won't lie, however marshmallowy and lumpy and somewhat useless I feel, my foot and the rest of my most of me actually like, feels waaaaay better. So, I don't know, maybe there is something to this. I really feel like I'm living life on the edge right now. Taking risks. Thinking outside the box. Growing as a person. Yadda yadda yadda.

Anyway, now that I've made myself sound sufficiently nuts for today, I'm going to wrap this up. I'm kinda itching to start training for XC and actually get a tad bit of speed back, but for now I'm not sure what race is next. But, I do get to go up to the Estes Park Trail Ascent Conference in mid-October, and I get to be on a panel about Effective Training, which I find somewhat comically ironic, but it'll be fun regardless. Who doesn't want to be in Estes in October?!