Quirkiness, creativity, and determination are traits that I admire. They are attributes that inspire me and, more often than not, they tend to go hand in hand when it comes to feats of endurance. Of all of the unique endeavors, the Terry Fox story is probably my favorite.

And anyone who has planked before will appreciate this one too. Word has it George recently broke his own record at 2 hours!

For the longest time this year, I found myself struggling to find motivation. And when it did finally arrive, I'm afraid it was manifested as overexuberance. A track work in single digit temperatures, a snowshoe marathon for which I wasn't trained, and a quintuple of Inclines which I hadn't properly built up to have left me with a nagging right hamstring and left achilles.  While, as with any injury, I was initially upset, the trials that some of my friends are going through right now put these things in perspective. It's never fun dealing with an injury but in the grand scheme of things, my issues will heal and life will go on.

Instead of focusing on what I can't do right now, I've adopted the mindset to explore what I can do. Being injured isn't an excuse to lose fitness. My work offers a gym to employees and it's been a great resource when outside fun is not an option. While not extravagant by any stretch of the imagination, this resource has allowed me to do a little bit of weight lifting, some flat and slow treadmill jogs, and yes, ellipticaling.

The elliptigo is catching on in popularity both internationally and locally. And in defense of it's stationary cousin, the standing, closed-chain workout I think trumps cycling, swimming, aqua-jogging, and even the elliptigo itself (due to the ability to perform arm swing) in terms of it's similarities to running. This realization, and the fact that I can go crazy on the thing while my pains remain dormant, led to my most recent adventure. The evolution of the idea went something like this:

Saturday 8:03 a.m.: After 3 minutes of jogging on the treadmil I switched to the elliptical because of some achilles pain.

Saturday 8:45 a.m.: Midway through the workout I question if anyone has done an elliptical marathon.

Saturday 8:46 a.m.: I decide I'm going to do an elliptical marathon.

Saturday 2:30 p.m.: With the help of some liquid courage, I commit myself to the silly event after sharing it with some friends at Manitou Mardi Gras. 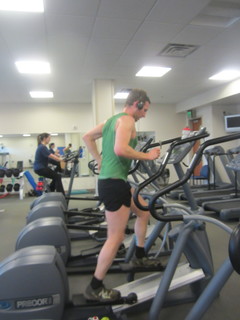 The rules for the 2013 Open Division Stationary Elliptical Marathon were as follows:

- Elligible athletes must be injured in some manner that precludes them from participating in their typical sport. In other words, the stationary elliptical marathon must be viewed as a last resort competition and should not be specifically trained for.

- Once pedaling has commenced, no stepping off is allowed.

- Continuous timing is used so that the seconds required to reset the machine after its 65 minute maximum are included.

- Open division. This offers the athlete the opportunity to modify settings during the race to suit his/her strengths. (This rule was established after 43 minutes of maxing out my cadence and still not breaking 10 minute miles).

- Only forward strides are permitted.

-Touching of handrails are only allowed while obtaining a heart-rate reading and must be promptly removed afterwards.

Here is more visual documentation of the day. 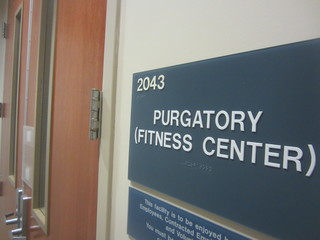 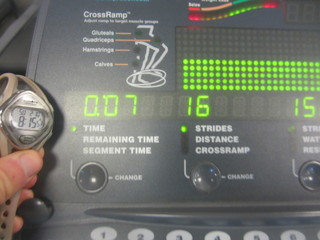 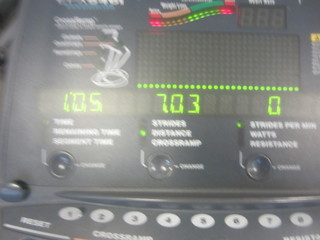 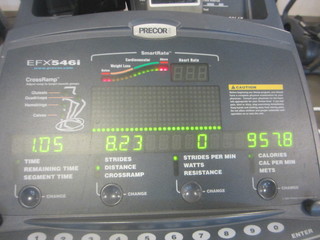 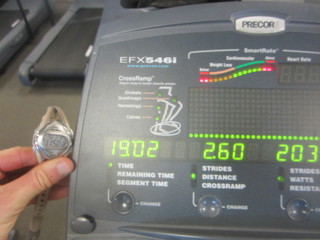 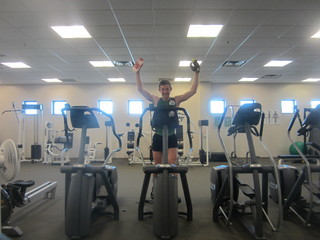 Finishing time was 3:35:05. Some other stats that I don't normally track but felt compelled to in order to ward off boredom include:

- Average wattage: 200-220 (after I realized that "speed" was dictated by wattage and not merely cadence)

After all was said and done, my metatarsals and my abs were the most sore. My glutes and quads were tired but not impact-beaten and more importantly, my achilles and hamstring felt fantastic. While far from glamorous, the Stationary Elliptical Marathon was a long-run equivalent for me when there were no other viable option. I can tell you that this injury better heal soon though. Otherwise I may have to simulate a crossing of the English Channel on the rowing machine beside me.

And now, the greatest treadmill music video of all time: